Where The Wyld Things Are 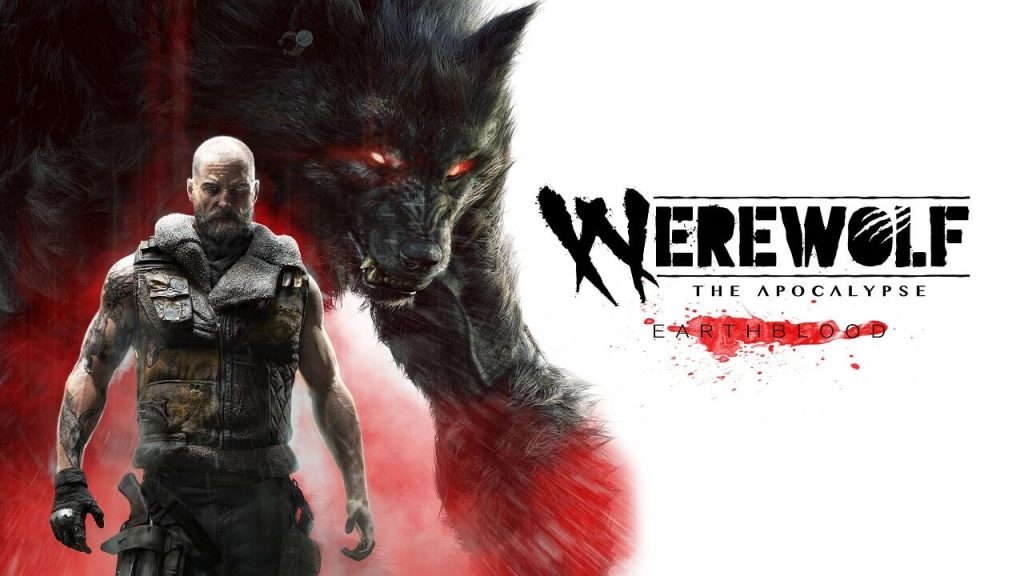 Developed by Cyanide Studio, Werewolf: The Apocalypse – Earthblood is an action-RPG set in White Wolf Publishing’s World of Darkness universe. Combining stealth infiltration and bloody, Devil May Cry-inspired action, it challenges you to master three unique forms as you fight to bring down an evil mega-corporation that’s threatening the world with its vile experiments.

The game puts players in control of Cahal, a Garou whose caern is at war with the evil energy company Endron. After a raid on one of the corporation’s facilities takes a turn for the worse, Cahal goes into a fit of uncontrollable rage and accidentally murders one of his pack. The story is set across five years as he makes his way across the forests of Washington, deserts of Nevada, and an oil rig in the middle of the Pacific to get revenge on Endron and prevent them from enacting a shadowy scheme known as the Earthblood Protocol.

Werewolf: The Apocalypse – Earthblood’s premise is undoubtedly cool. After all, werewolves are nowhere near as well-represented as vampires, zombies, and other supernatural staples in video games. So I eagerly jumped at the opportunity to channel my inner lycanthrope when this game landed in my inbox. Sadly, that excitement was short-lived. While it’s fun to slash your foes to ribbons as a towering monster for a little while, Werewolf: The Apocalypse – Earthblood’s shallow combat and repetitive gameplay cut through the experience like a hail of silver bullets.

Bark At The Moon 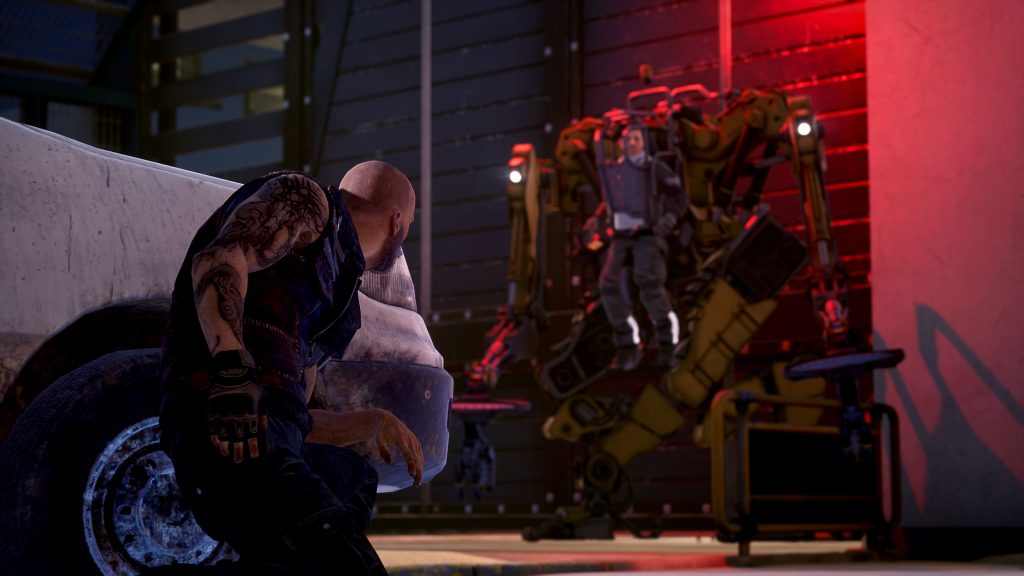 Cyanide Studio describes Werewolf: The Apocalypse – Earthblood as an action-RPG. But if you’re expecting something similar to Troika’s classic horror RPG Vampire: The Masquerade — Bloodlines, you’re probably going to be a little disappointed. Apart from a customizable skill tree to dump experience into and the occasional dialog choice, this is a very linear game that plays more like a weird amalgamation of Splinter Cell (you even unlock an ability that mirrors Sam’s Mark-and-Execute mechanic introduced in Splinter Cell: Conviction) and the aforementioned Devil May Cry than anything else.

Most of the time, you’ll be sneaking through labs and other industrial areas in Cahal’s human form. Cahal can’t fight as a human—at least not in the traditional sense—but he can dispatch enemies with silent takedowns and his trusty crossbow. Of course, being a werewolf and all, Cahal also has some supernatural abilities at his disposal. He can turn into a wolf leap to high ledges or squeeze into air ducts to reach hidden areas. In addition to the wolf form, as a Garou, Cahal also has the gift of Umbral Sight. This power can be used to detect enemies through walls or trace electrical sources so you can locate computer terminals to unlock doors, disable turrets, and shut off cameras.

This ability sounds handy, right? Well, not exactly. While Umbral Sight is cool in theory, it’s never really used in a meaningful way. Cameras are already easy enough to spot due to the large searchlight they emit. And computer terminals are often within sight of whatever door they open. It eventually got to the point that I quit using this power for everything but helping to sniff out random nature totems that can reward you with a few extra experience points. 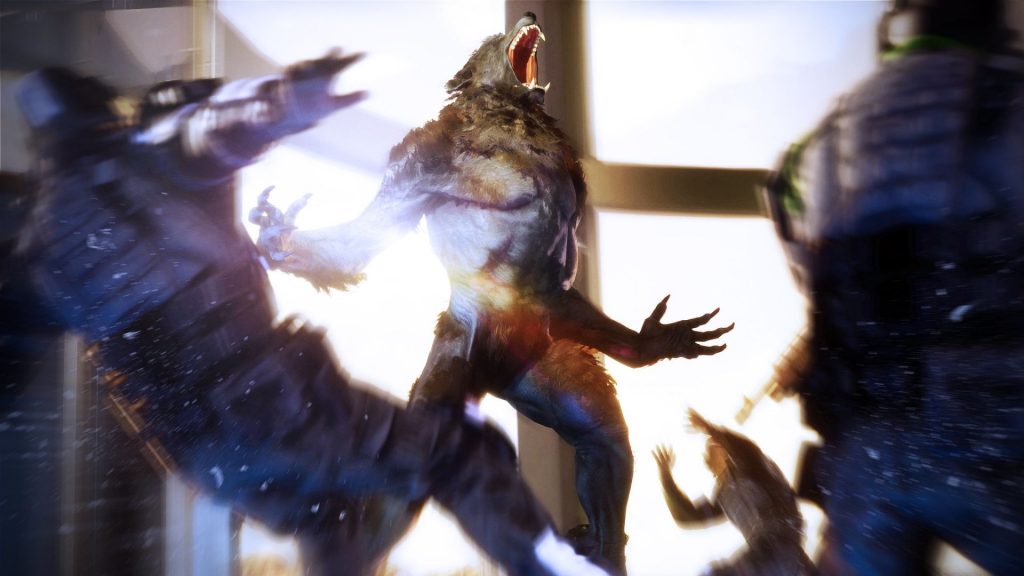 Sneaking will only get you so far in Werewolf: The Apocalypse – Earthblood. Endron’s security forces are everywhere, and before long, you’ll have to go head-to-head with them. Once spotted, Cahal will transform into Crinos, his true werewolf form, and you’ll need to battle waves upon waves of enemies until you can move onto the next area. Controlling Crinos is simple. You can unleash light and heavy slashes by pressing square or triangle. Additionally, you can switch between two stances—Agile or Heavy—which are better suited for taking on different enemy types.

For example, the Agile stance allows you to quickly close the distance between you and your enemies or leap great distances to tackle foes. This stance is especially useful when dealing with annoying ranged enemies armed with silver bullets, as these can reduce your maximum health for the fight’s duration. As you’d expect, the Heavy stance is much slower. However, this sacrifice in speed is made up for in raw power as the Heavy stance is harder to interrupt and can even knock foes carrying shields to the ground so you can get some cheap hits in while they’re defenseless.

As you pummel your enemies, your rage will increase. Rage is used to power your special attacks and healing abilities. You’ll unlock a handful of skills for each form as you level up Cahal. These range from a mighty roar that can knock your enemies off their feet to a dash that allows you to send your foes flying like fleshy bowling pins. 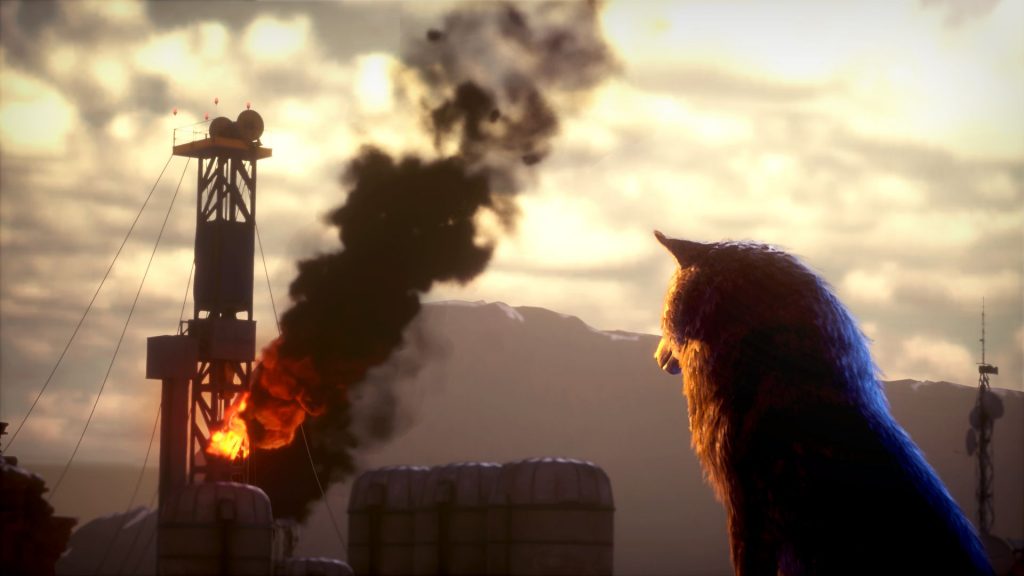 You’d think having this variety of skills at your fingertips would make the combat quite exciting. Unfortunately, that’s not really the case. That’s because the enemies in Werewolf: The Apocalypse – Earthblood are dumb as a bag of hammers. They’ll mostly stand in place firing lazily while you viciously maim their comrades. To make matters worse, the game is in serious need of some more enemy variety. You’ll fight the same nameless grunts and bald super soldiers for the vast majority of the 10-hour campaign. Some more exciting creatures are eventually introduced, but that’s not until the final push towards the credits. If only these baddies were introduced steadily throughout the story, it would have gone a long way towards making the action more exciting.

Between the rinse-and-repeat fights against legions of repetitive enemies and the game’s shallow and uninteresting stealth mechanics, it doesn’t take long for Werewolf: The Apocalypse – Earthblood to start to wear out its welcome. Towards the latter half, I genuinely found myself constantly checking my progress meter because I was just ready for it to end. With a satisfying story to drive the action forward, I probably wouldn’t have felt this way. The problem is Werewolf‘s story is frustratingly predictable, and the characters just aren’t all that interesting, which made deaths that the developers intended to be impactful feel mostly weightless.

As far as PS5 games go, Werewolf: The Apocalypse – Earthblood is pretty much indistinguishable from its last-gen brethren. The action is smooth and moves at a steady clip with no noticeable slowdown – even when bodies and explosions fill the screen. But considering how basic the character models look, this shouldn’t come as a huge surprise or anything. There are plenty of muddy textures, though. This issue is especially noticeable when it comes to the massive blood pools that form on the floor after a battle. They are quite ugly and stick out like a severed thumb. The music fares a bit better. Sneaky synth tunes accompany the infiltration segments, and they fit the action well enough, and the extreme death metal that kicks in whenever you transform into Crinos is delightfully campy.

Werewolf: The Apocalypse – Earthblood isn’t a terrible game, but it’s most likely not one that’s going to stick with you long after the credits roll. It’s mindless and repetitive, but if you’re a fan of World of Darkness and feel like channeling your inner wolfman for the weekend, it just might scratch that primal itch. However, if you’re on the hunt for an action-RPG with some meat on its bones, you’re much better off sinking your claws into something else.