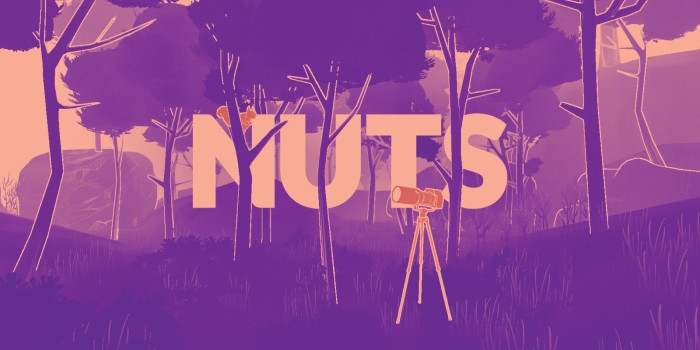 The tagline for NUTS on its official Nintendo page is as weird as it is intriguing: “Spy on squirrels in the forest.” And yet this really is an incredibly apt description of the game. Created by Joon, Pol, Muuutsch, Char & Tofi, NUTS is a game with a wonderfully unique premise, and an art style just as distinctive. 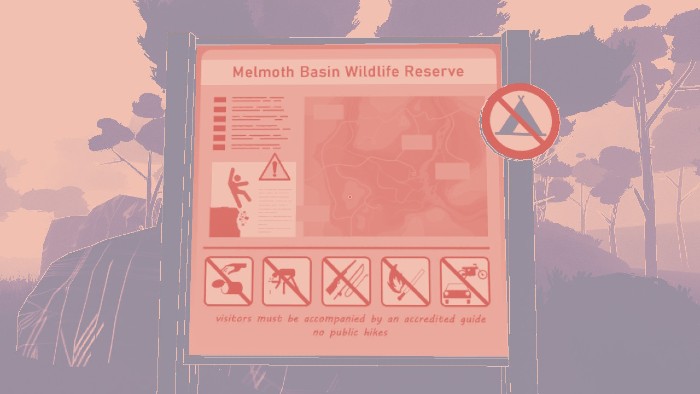 It’s hard to talk about the story of NUTS without giving too much away. The story does indeed revolve around spying on squirrels, but it’s surprisingly much deeper than that. The game begins with the player arriving at Melmoth Forest. Your task? To observe the squirrels for Viago University’s research. As you track the movements of the squirrels in Melmoth Forest, you’ll discover that they don’t behave like normal squirrels should. Sadly, that’s about as much as I can tell you without spoiling anything for you, but I’ll leave you with this: the story is somewhat short and simple, but also oddly moving. 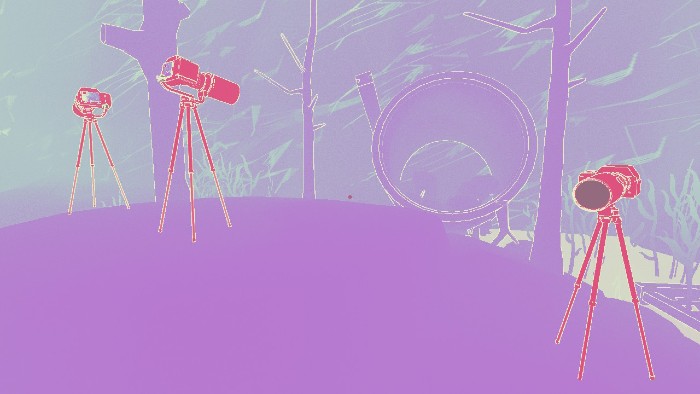 Gameplay is basically split into two parts: daytime and nighttime. During each day, you’ll set up your surveillance cameras to try and capture the strange squirrels on film. You’ll begin the game with only one video camera, but as you progress, you’ll gain access to more. You’ll also be given a GPS device that provides a convenient mini-map. This handy device places marks showing where your squirrel surveillance will begin, and where your cameras are in the forest. The game is viewed from a first-person perspective. I’m not typically a big fan of this perspective outside of dungeon crawlers, but it works really well here. Once you’ve got your cameras set up, you can head back to your caravan which serves as your base of operations. By sitting down and hitting the record button on the video recorder, you’ll switch over to nighttime. 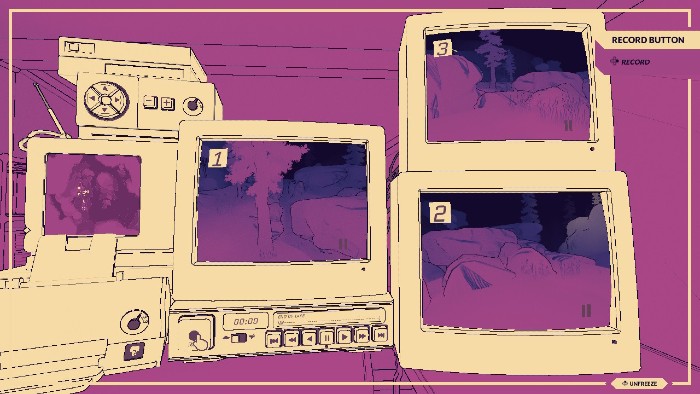 For some reason, the squirrels of Melmoth Forest are more active at night, so you’ll end up observing them at the end of each day. It starts off fairly simple; you have one camera and one TV to watch the recording captured by that camera. Your first task is to follow the squirrel from its starting point to its stash of nuts, and capture an image of it with its hoard. Just like any video recorder, you can fast-forward, rewind, and pause your footage. You can also adjust the speed at which it plays in case you need to slow it down slightly. You can also zoom in on a specific screen, enlarging the captured image several times.

Sounds easy, right? Well, it starts off simple, and the complexity very quickly scales upwards. The cameras have a fixed view, so once you set them and start recording, what you see is what you get. Since you start with one camera, you really only get a recording of the squirrel scampering down the tree and then sauntering past your camera and out of sight. This is where the extra cameras come in, and eventually, you’ll have access to three of them. You’ll need to get crafty, angling your cameras to try and cover the most ground possible to see where your squirrely little friend is going. Thankfully, each of your cameras is numbered one through three, and the map also shows which camera is which. This definitely helps you from accidentally moving the wrong camera. When you’re done reviewing the footage, you can either move to the bed in your caravan or simply go out the door. Doing either action triggers time progressing to the next day. 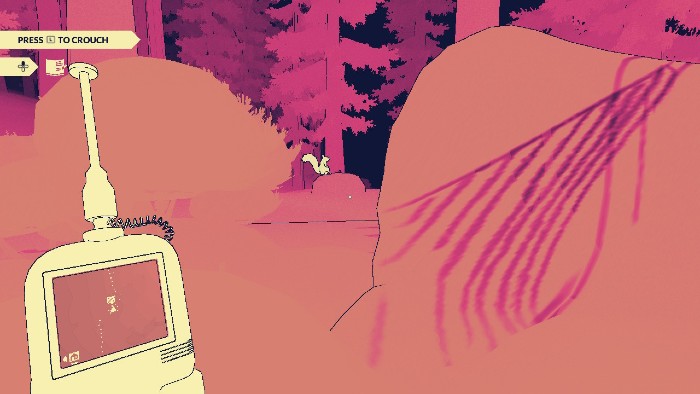 You’ll start with a lot of trial and error, but that’s a big part of the game. NUTS does not hold your hand, leaving it up to you to determine where you should place your cameras, and at what angles. Once you’ve successfully completed your assigned task, you can print the still from your footage as proof and fax it over to your boss. She’ll give you a quick call on the phone, and discuss your findings, and any other steps you might need to take. A good portion of the story also takes place during these phone calls, so I recommend paying attention to what your boss says when she calls.

The Forest Holds Many Secrets 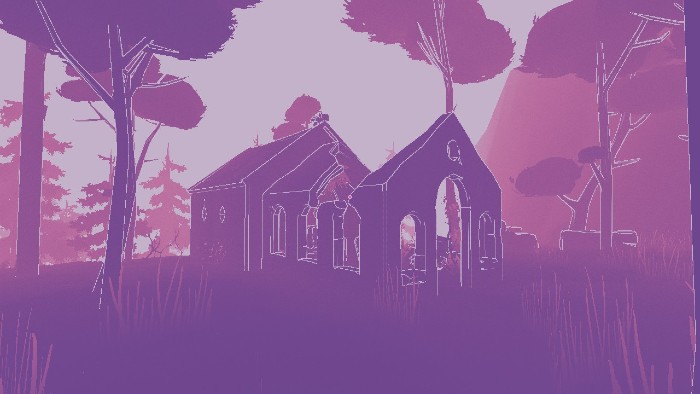 Outside of setting up your cameras and stealthily spying on those (possibly) innocent squirrels, you’re free to spend the daytime exploring the forest. As you progress, you’ll move to new areas of Melmoth Forest, each with its own unique geography and discoveries. While exploration is entirely optional, I strongly recommend it. Doing so might help you find some additional information you might otherwise have missed. Again, I don’t want to give it away because the magic is in the experience, but the method the developers employed to reveal additional story elements was very creative, and I found myself eagerly scouring the forest for more. 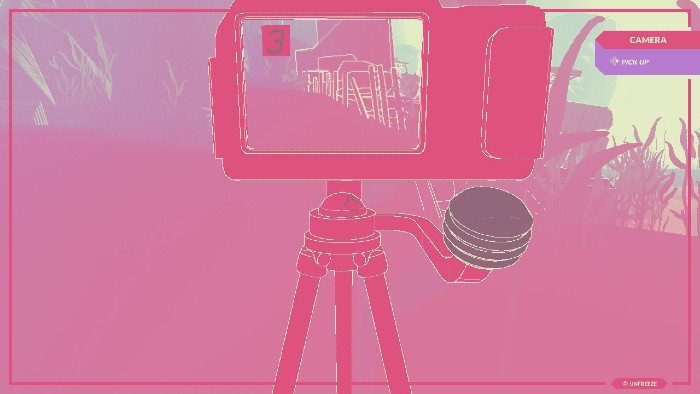 One of the few sticking points of this game is the controls. They’re definitely a bit on the clunky side, though in fairness, I can’t really think of a way to improve them. It could just be the nature of the beast. Movement is done with the left joystick, while the right joystick will change your direction as well as let you look up and down. L allows you to crouch, and ZR lets you run. Each direction on the D-pad corresponds with one of the four extra items the game provides you with: your journal, which shows your current objective and any snapshots you’ve taken; a simple camera to take snapshots; your GPS device, and a voice recorder. You interact with objects with A, which includes picking up your camera.

It’s with the camera that the controls get a little clunky. Once you’ve got your camera placed, if you want to change the angle, you have to shift your view so that the cursor in the center of the screen lines up with the handle. Then you have to hold the A button and move the angle, and it’s hard to make fine adjustments to the camera. You can also freeze the screen by hitting the X button, and this allows you to move the cursor without moving the rest of the screen, but it’s an imperfect solution. Honestly, once you get the hang of it, it’s not that bad, but it’s not ideal, either. 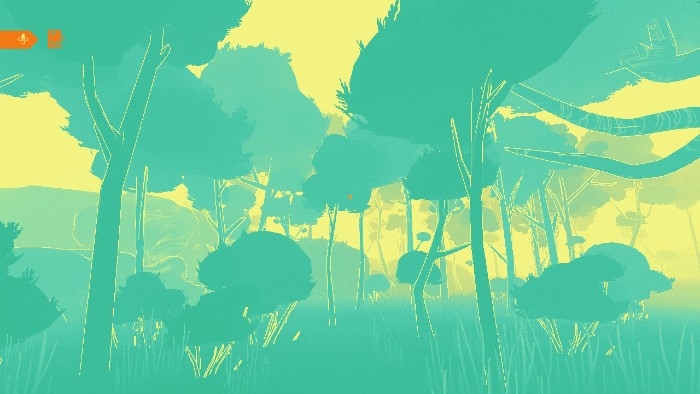 By now, you’ve noticed that the artistic style of NUTS is… unique, to say the least. I found it weird at first, if I’m being perfectly honest. Yet once I started exploring the forest, I went from critic to fan quickly. I can’t quite explain it, but somehow, the art style of this game just works. By removing the normal forest color palette, it gives everything a strangely beautiful ethereal quality. Instead of trekking through a drab forest, you’re sleuthing your way through some ancient, otherworldly forest and it’s just so captivating. The art style never feels stale, either, since the color scheme changes at night, and you get a brand new color scheme for each new area of the forest you explore.

I wish I could go into detail about the music, but there really isn’t much. You won’t really miss it, though, as the sound of babbling brooks, birds chirping in the trees, and the other sounds of nature that make up the game’s soundtrack help to really immerse you in the forest. The sole exception is the song during the ending credits, which was a welcome, and incredible, treat.

Everything in NUTS revolves around discovery. Discovering what these strange, fascinating squirrels are up to; what secrets are hidden in the ancient Melmoth Forest; discovering the past, as well as the future. Short without feeling short, simple without feeling simple, this game is as odd as it is beautiful. Go out on a limb and give it a try. You won’t find anything else like it.

Full disclosure: This review is based on a copy of NUTS provided by the publisher.