Zombies and Bazongas on Mars. Of Course. 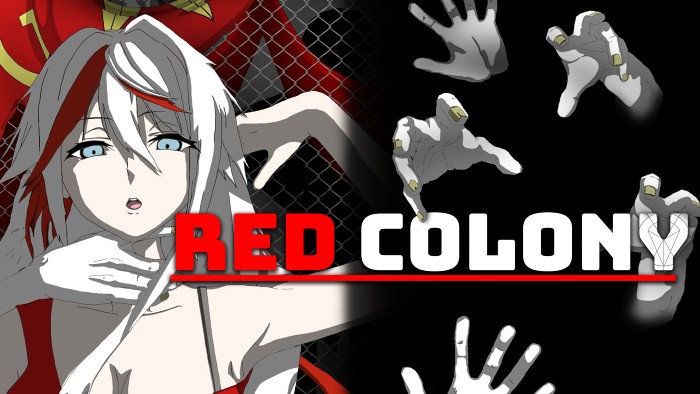 Red Colony, from developer RunicCodes, ticks a lot of boxes in the B-horror movie category. A mad scientist experimenting with a deadly virus? Check. Gratuitous amounts of blood? Double check. A female protagonist with absurdly abundant assets? Triple check. But does the formula that makes for an enjoyable B-horror movie work for a game? As I’ve said before, I’m a fan of all things horror, so I was curious to see if something so shamelessly over-the-top could also be enjoyable.

A B-Horror Movie in Game Format 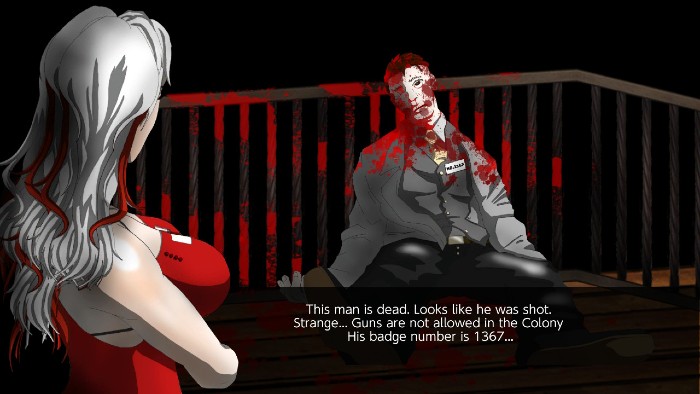 The game begins with the protagonist, Maria, waking up in a warehouse. Something is clearly terribly wrong, and, worried about her family, Maria has to find a way out. It doesn’t take long to piece together that there’s been a viral outbreak, and it’s turning the colonists into zombies. Oh, did I mention that you’re on Mars, in the titular Red Colony? From there, the story is… well, to be frank, it’s a hot mess. But I’ll give it this: it’s a consistent hot mess. The characters act in ways that match the traits you’re able to glean from the dialogue. The plot twists are entertaining, if nonsensical. All in all, it really does feel like the script for a straight-to-DVD horror flick was made into a game, and I’m here for it.

You Kiss Your Mother With That Mouth? 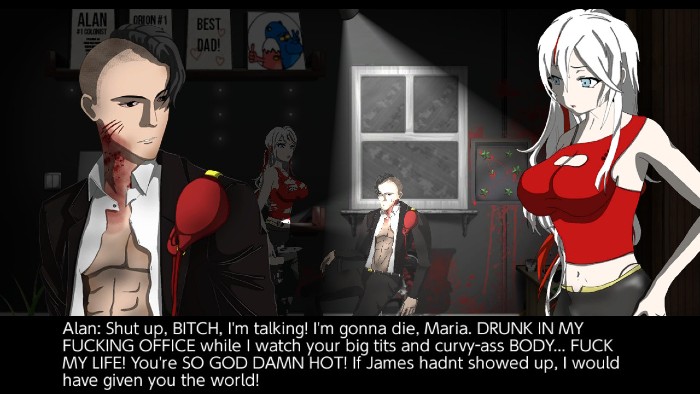 My greatest criticism for the game’s story centers around the dialogue. Interactions between characters are… vulgar, to say the least. Vulgarity by itself never bothers me, but it felt excessive in this game. For example, in the screenshot above, it just didn’t feel like something somebody would naturally say in the midst of a zombie apocalypse. Which, I know, I know, this is a b-horror flick turned into a game, but even still, it felt a bit juvenile.

The gameplay definitely has the feel of classic horror games like Resident Evil, just 2D and side-scrolling. Most of the game is spent searching the sprawling colony, looking for Maria’s husband and daughter. As you explore, you’ll come across various puzzles that require either a code or an item to solve. Codes are usually found nearby, sometimes worked into the design of a nearby poster, sometimes hidden in the text messages from a friend. Puzzles requiring items reminded me again of Resident Evil; find item A, sometimes combine with item B, inset into slot B or C. While not innovative, there’s certainly nothing wrong with that formula. My only real complaint regarding the puzzles is that I wish they’d been a little more challenging. 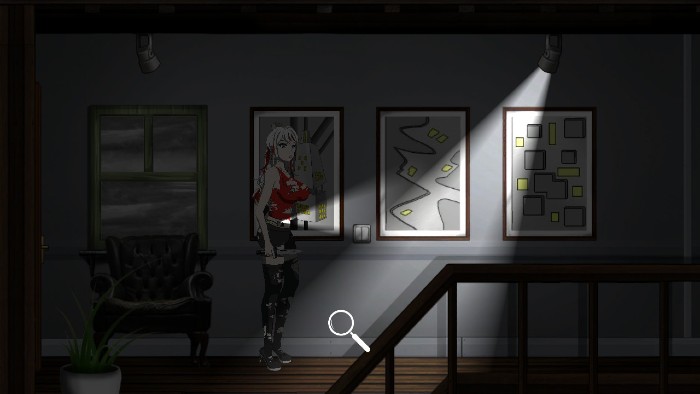 While you’re exploring, it’s inevitable that you’ll run into zombies. While there are probably plenty of people who will disagree with me on this, I’m going to say it anyway: clunky combat mechanics you find in old-school horror games are part of what makes the genre so great. And Red Colony has wonderfully clunky combat mechanics. To go into a combat stance, you hold either L or ZL, aim up or down with the left joystick, and attack with either R or ZR. It takes a little getting used to, and even longer to remember that once you’re in a combat stance, you can’t walk or run until you release the button. 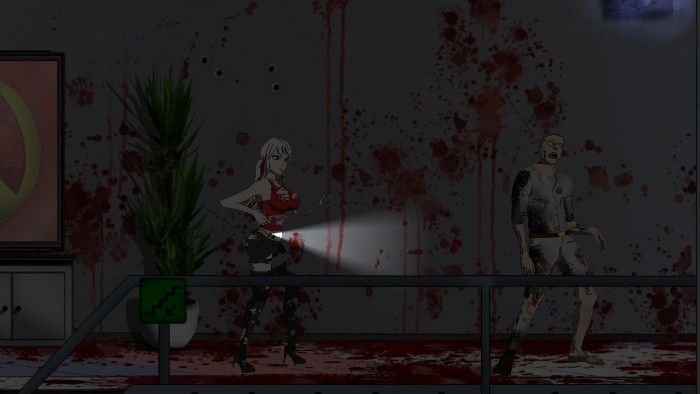 Your first weapon is a simple knife, and as you progress, you’ll gain access to three different guns. The mechanic behind obtaining new weapons and ammo is rather interesting; rather than find a new gun in a box hidden by a puzzle or some such, you’ll actually find materials to use at a 3D printer to make your new guns and ammo. Unfortunately, it’s here that I have to levy my biggest criticism against Red Colony: the weapon system is broken. Whether attacking with a knife, handgun, or even a shotgun, every weapon seemed to do the same amount of damage. Sure, it was really satisfying watching chunks of zombie go flying in every direction (which happens every time you hit a zombie for the first time) the first time I used the shotgun, but then I realized it took as many hits with the shotgun as it did the handgun. Then I realized the handgun took as many hits to kill a zombie as the knife did. Really, the only difference between the knife and any of the guns is that you can fire the gun from a distance. But ammo is scarce, and I ended up using the knife almost exclusively.

Aside from combat, controls are pretty basic. You move left and right with the left joystick, and you interact with items in the environment with A. Holding down the Y button will allow you to run. Now and then, you’ll be presented with the opportunity to crawl under parts of the environment, either to get around an obstacle or to avoid detection from a nearby zombie. This is accomplished by holding down on the left joystick, causing Maria to first crouch, then to get on her hands and knees, where you can direct her to crawl left and right with the same joystick. 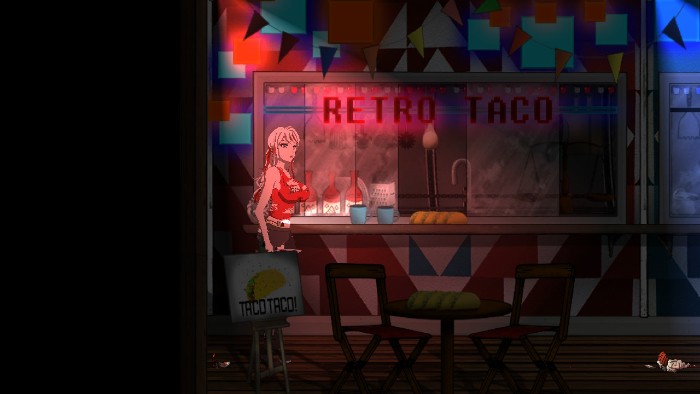 The environments are where Red Colony (mostly) shines. Each new house or building you explore has its own distinct look and feel. Each one is appropriately creepy and ominous. And the jump scares! I absolutely love a good jump scare, and this game does not disappoint. As my  husband can attest, at one point, I quite literally yelped when something scared me. The jump scares are very well timed and got me every single time. Now for the caveat. I say the environments mostly shine because when you’re outside trekking from one building to the next, the environment is rather bland. Especially in comparison to the spooky atmosphere once you’re indoors again. It’s not a dealbreaker, but it’s definitely a jarring experience. The sound effects are decent enough. The soundtrack was appropriately foreboding but largely forgettable.

Overall, Red Colony is a fun game, but not a great game. I think if the dialogue was polished up, if the weapon system was rebalanced some, and if the puzzles were just a little more challenging, this game could have been something special. Like a house in need of work, it’s got solid bones. It just needs to be spruced up a bit. As it stands, you can beat the game in under 3 hours. I was entertained during my hours with the game, and I got several enjoyable jolts of adrenaline for my troubles. If you can look past the flaws, I think you’ll find an enjoyable experience.