It’s written in the stars 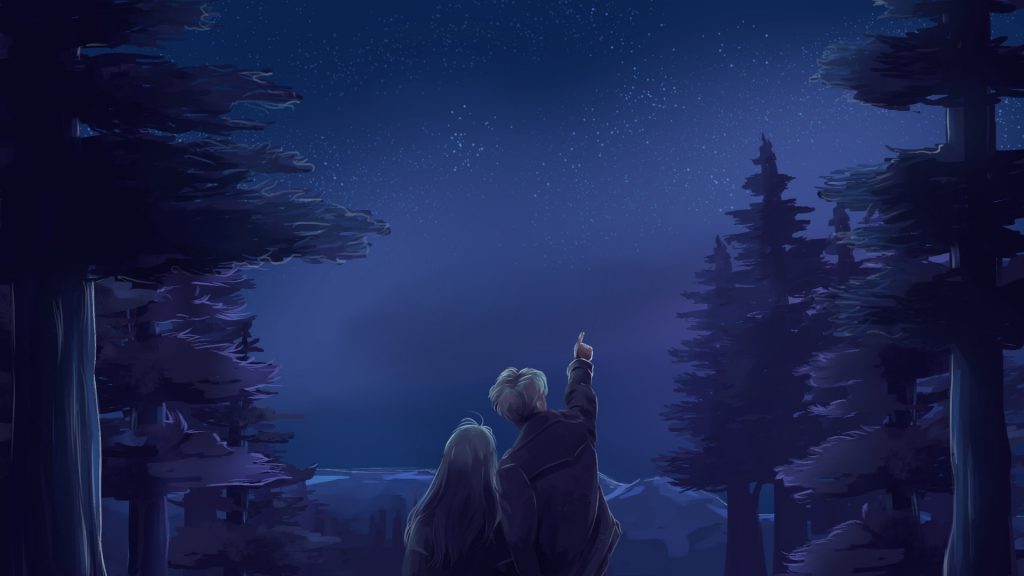 After volunteering and working for Asian-American organizations focusing on visibility for the issues within the community for over a decade and marrying into a Korean-American family with roots in Hong Kong, I feel like I’ve been offered a rare, intimate glimpse into the Asian Diaspora experience and the issues faced within. Family dynamics is one that immediately comes to mind, as communication can often be between the lines or not at all. Mental health is another, the isolation, erasure, and depression that many feel having intricate layers often inextricably and unfortunately tied with culture and race. And then there’s the very precious, delicate relationship between the men and women in this community, who, in their shared pain, as Asian-American activist and artist Joshua Luna eloquently illustrated, should seek healing reconciliation but often choose harmful retribution instead. Unfortunately, for many reasons, these issues are usually not given the time, attention, and recognition they deserve, and millions of people continue to suffer silently, feeling lost and disconnected from others.

That’s what makes a game like The Space in Between so important — an Asian-American-focused visual novel so unassuming in its short but sweet delivery that is powerful, raw, and honest about all of these issues and more. Developed by untitled group of developers Emily Pitcher, Ray Hsiao, Alan Guan, Hayden Nuyens, Elizabeth Han, Julia Lee, Wei, and Richard Cheng, and published by Sondering Studios, The Space in Between can be found on Steam and itch.io for free with an accompanying Webtoon called Searching in Between that serves as a prequel leading up to the game’s events. With beautifully hand-painted illustrations, chill lofi music, and writing full of life-lessons and love, The Space in Between will definitely move those who feel the need to be seen. 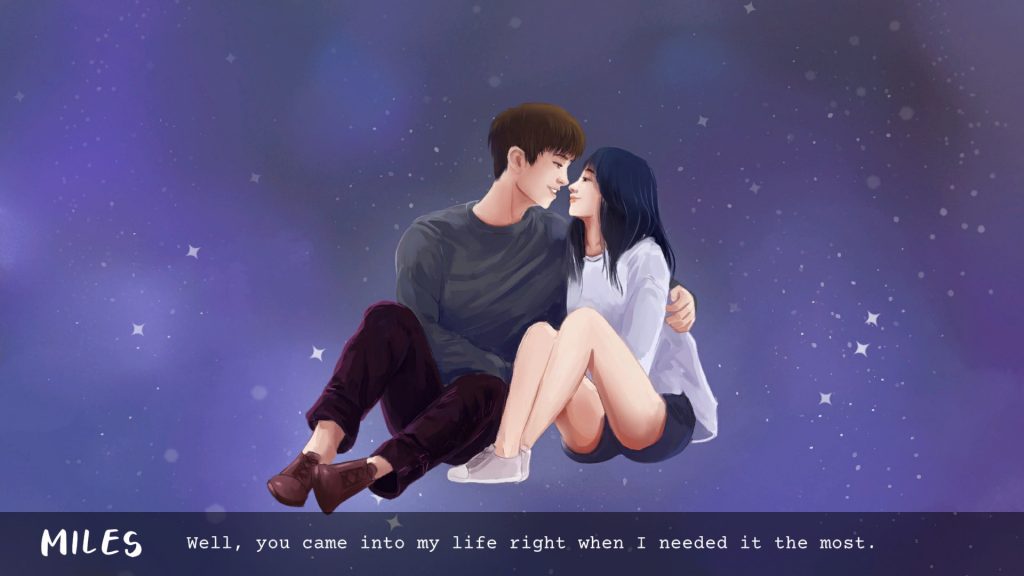 The Space in Between has players loosely taking on the role of June, a Chinese-American college girl who hadn’t had much luck in love, but not for lack of trying. Fate placed June and Miles in the same class together, the pair quickly discovering they share the same taste in music and video games. There are some player-directed choices to be made at the beginning that provide some background info, but the story really starts five months after they start dating, the couple taking a road trip out into the wilderness to stargaze one quiet evening. As they lay in the grass looking up to the sky, Miles confesses that he used to make up his own constellations, and June jumps at the chance to try her hand at it, the couple spending the night seeing images under the twinkling canopy and sharing deeply personal and profound memories connected to the newly discovered constellations.

Although Miles and June feel completely understood by the other person, the two have wildly different personalities and issues. June speaks her mind freely, willing to share her trauma surrounding her relationship with her estranged mother, while quiet, thoughtful Miles suffers his depression and isolation in silence. June sees plenty of images associated with her Chinese-American upbringing, while Miles’ softer side sees constellations that tend to focus inwards. Despite their differences, the two listen to each other intently and communicate openly, this beautiful, intimate moment a joy to experience. 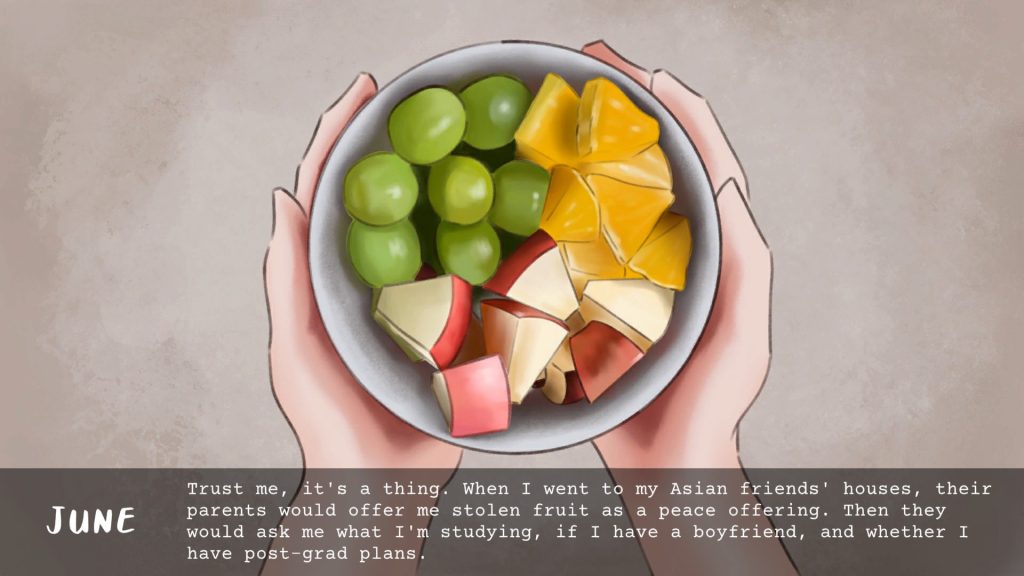 June’s issues were more focused on the Asian-American experience, and her memories and struggles were absolutely dead-on. Some of the more light-hearted ones were immediately recognizable, like the white rabbit candy and the image of older ladies all gossiping over tea and snacks. Quite a few of these experiences are true across Asian nationalities — my Korean mother-in-law (pre-covid) regularly gathers with the other “ahjummas” to eat and gossip over tea — with the most charming one being over fruit. I laughed at how true it was that stolen fruit is absolutely a thing, how fruit slices were a way to initiate a conversation, as a peace offering, or as a way of showing love. I haven’t found a “fruit culture” like the one shared amongst many Asian nationalities, and hearing June share it from her point of view provided some odd comfort by way of recognizing the familiar.

The Space in Between explored June’s strained relationship with her mother as well. Although it was darker, it’s important as it delves into the communication breakdown that can happen when families don’t talk to each other. June’s mother was, for an unknown reason, incredibly cold and angry in June’s later adolescence, the two finally having a massive fight that resulted in them not speaking to each other. June couldn’t figure out what made her mother turn so angry because she genuinely remembered the good times early on, lamenting that a fair amount of her Asian identity within the community she grew up in relied partially on being in good standing with her mother. June may not have a relationship with her mother at this time, but she is very open about this trauma with those around her, taking the necessary step to work through these heart-breaking issues. 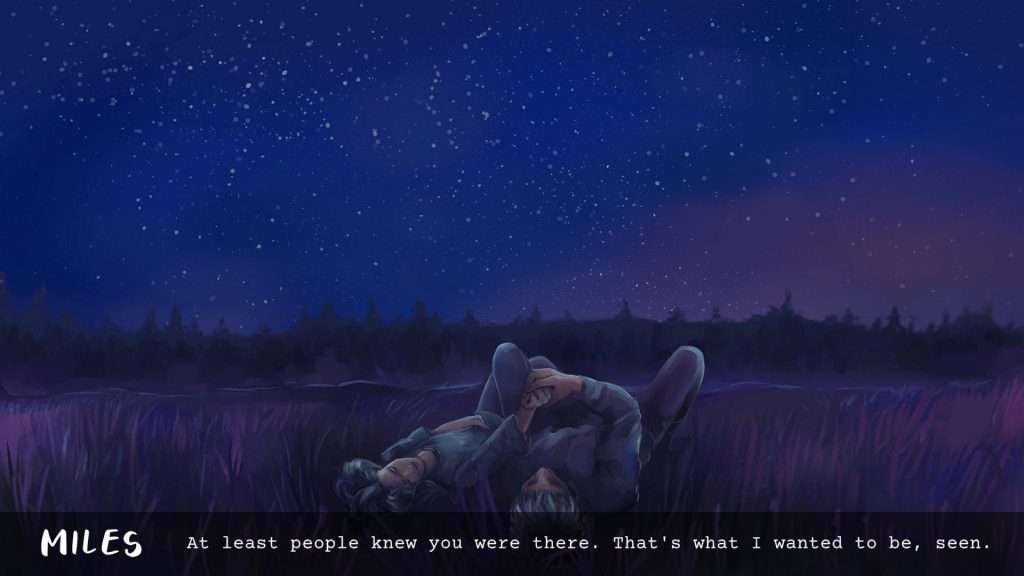 In fact, June served to be quite a deluge of issues experienced by Asian-American girls, including tackling Western beauty standards that had essentially excluded her. From no one knowing how to do make-up for eyes with monolids to being told that maybe the reason why a particular guy didn’t go after her was because he “didn’t like Asian girls,” June expressed freely how micro-agressions by others resulted in a lot of pain over time. Meanwhile, Miles patiently listened, taking in all her pain and anguish and providing that comforting, listening ear she needed. It was so refreshing to listen to June list out her traumas and have a loving boyfriend in Miles on the other side be there for her with every breath.

Which brings us to Miles — quiet, thoughtful Miles — who stands on the other side of this community and, with measured, poignant words, discusses his struggles with mental health. Where June brought very specific, on-the-nose issues that are immediately recognized as pertaining to the Asian-American community, Miles’ nuanced approach highlighted major issues Asian-American men face: depression, isolation, erasure, and dehumanization. At one point in the game I pulled over my husband to show him some of Miles’ text, both of us agreeing how almost exactly alike the two were. Taking time off school to deal with depression, wishing to be visible by others but ultimately turning inwards to cope, and just ultimately lamenting over the lost time that could have instead been spent productively was like listening to a younger version of my husband. The Space in Between is so clearly made by Asian-Americans discussing Asian-American issues, and games like this are both rare and precious beyond measure. 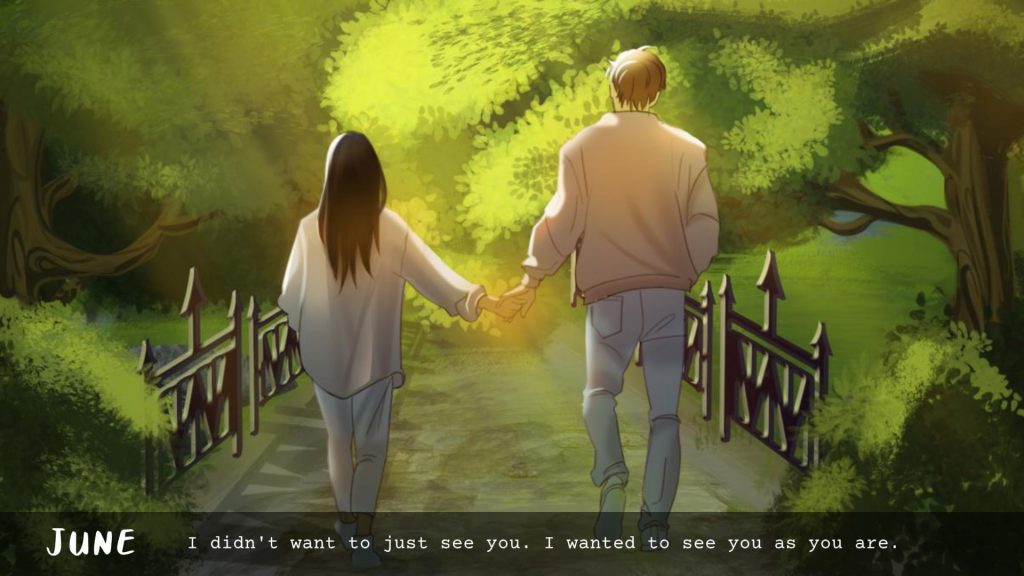 I really only have one bit of feedback, and that’s that I really wish it was explicitly stated that Miles was Asian-American as well. My husband is pretty confident Miles is indeed Asian, but there were so many comments that made me unsure. While he looks Asian in every image I’ve seen, so many of his questions were pointed in such a way that he sounded like he was learning about the basics of the Asian-American experience through June instead of contributing his perspective on common issues Asian-American men face. In some ways, it makes sense that Miles was quieter about his experiences and instead offering space for June to speak, but having that absolute identity marker is immensely helpful when non-Asians play the game, lest we assume the character is White and the specific issues Asian-American men face don’t get the same air that Asian-American women received in this game.

When all is said and done, I keep coming back to Joshua Luna’s comic about reconciliation between Asian-American men and women. Both have suffered in the Western sphere with issues that differ depending on their gender, and both are incredibly hurt by the “other side’s” participation in this pain. The Space in Between was like a cool salve to an open wound, a desperately needed, honest and raw conversation between Asian-American men and women sharing the pain they experience and just being there for each other, lovingly supporting the other. This game is tremendously healing for those who need it yet romantic and sweet for those who remain on the outside, a valuable educational opportunity available for players willing to learn.

The Space in Between can be completed in less than an hour, but it’s the quality of the writing, the beauty of the aesthetics, and the importance of its message that make it feel like a much longer experience. How the team managed to condense two lifetimes of pain and trauma found within the Asian-American community into a 30-minute experience is beyond me. If you’re looking for a wonderfully sweet depiction of a healthy relationship or want to play more games exploring the Asian-American experience, look no further than The Space in Between — the only cost is 30 minutes of your time (and maybe some tissues).

Editor’s note: This review is based on a retail copy of The Space in Between available for free.

Elex, also known as Dost Thou Wishest To Join Our Faction, Good Sir?   RPGs are a dime a dozen. Gamers can’t swing their Mario hats without knocking down…