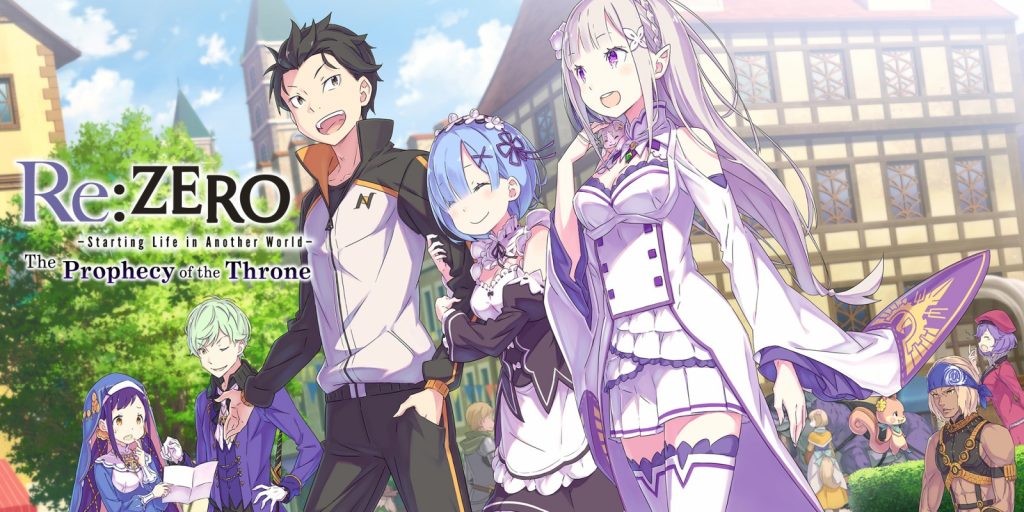 Ahh, anime-inspired video games! Sometimes they can get kind of a bad rep, but I like the lot of ’em. Not only do I usually have fun with the games themselves, but I’m also inspired to do some… *ahem*… research for the sake of the game. And by research, I mean watch the first two seasons (or 1 and a half seasons, maybe?) of the Re:ZERO anime in order to better understand Re:ZERO -Starting Life in Another World- The Prophecy of the Throne. And boy am I glad that I did, because there’s a lot to unpack, here. Also, I really enjoyed the show.

As far as non-canonical spinoffs go, The Prophecy of the Throne is pretty darn solid. I guess that sort of goes without saying, seeing as how series creator Tappei Nagatsuki had a role in the game’s creation, but I digress. They did a solid job of making the game feel like it could actually pass as part of the main story. Ironically, this also works against it in certain ways, but we’ll talk about that later; all-in-all, things look pretty good. 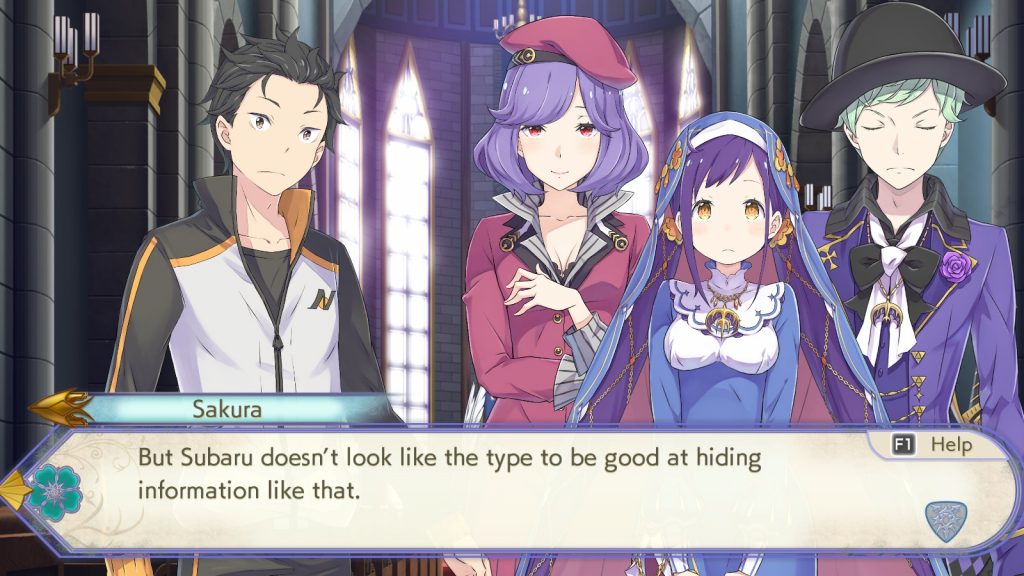 As niche as this game is, you probably haven’t been following it if you aren’t interested in Re:ZERO as a whole. And that’s great because it saves me a whole lot of explanation. So, to start things off, calling this game something along the lines of a “side-story” or a “spinoff” isn’t, as far as I’m concerned, entirely correct. In truth, The Prophecy of the Throne is a “what if” scenario! The game begins right after the arc that saw Subaru, Rem, and Ram successfully taking down the pack of Wolgramm mabeasts (with some help from Roswaal), with Suburu and Emelia chatting away in the middle of Arlam village. It doesn’t take long for things to start diverging from the norm, however. Remember the part of the story when Crusch arrives to discuss some things with Emelia and Roswaal, leaving Subaru to discuss matters with Wilhelm over some stolen tea? Well, Crusch & co. aren’t there. Instead, we’ve got ourselves some fresh new faces in the form of Melty, Tiga, and Sakura—and things only deviate further from there.

So, there are a few basic thoughts that go through my head when thinking about how this game handles its story—and, as I mentioned earlier, they’re basically two sides of the same coin. On one hand, The Prophecy of the Throne does a great job of telling a story. Everything from the writing, to the characters and character development, to the tone, has been skillfully translated from the light novel/manga/anime to this game, and it really feels like part of the Re:ZERO universe. It’s honestly and truly great. 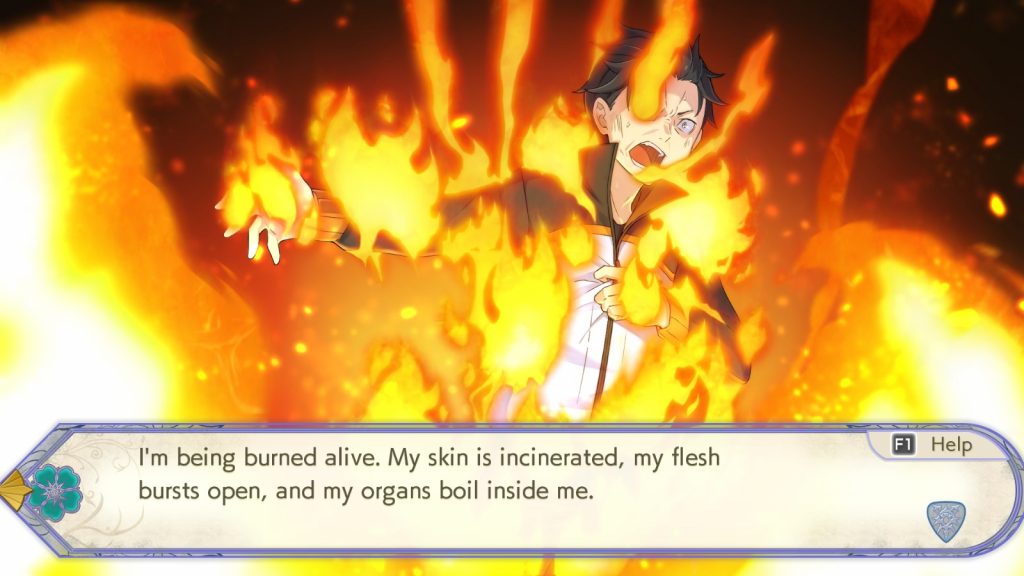 Unfortunately, it almost feels too similar. Now, I’m willing to admit the possibility that some of this could be on me, here. Having just watched everything I could get my hands on (minus the prequel movie), this entire series is extremely fresh in my mind—so fresh that I could pinpoint all of the quotes that they pulled directly from the anime. And, while it was nice to be able to experience even more new content related to the series, the pacing kind of killed me at certain points. I get that the game needed to set things up properly, but there were so many parts during the first 10 – 15 hours of the game that felt less like new stories and more like slightly different versions of the anime that I had just watched that it made it hard to concentrate on what was going on. So, while I’ve got to give it credit for sticking so closely to the source material, I might suggest not watching the anime right before playing this. Or, at least, not the first season.

Also—because I’m not sure where to put this—I’d like to take a second to thank Spike Chunsoft (at least I think it was them) for doing something that almost no one ever does when it comes to visual novels (which this basically is)—include English voice acting. I know that there are plenty of people who like to argue that subs are better than dubs, but that’s never going to be the case for me. I don’t care if what they’re saying is being shown on-screen, it’s so much easier for me to bond with characters when I can actually understand what they’re saying. And, on top of that, Re:ZERO‘s English cast is just plain good. I couldn’t get enough of them in the anime, and I was over the moon about them reprising their roles in The Prophecy of the Throne. You have my sincerest thanks for bringing such a treat to my ears.

The Cutest Lil’ Return by Death You Ever Did See 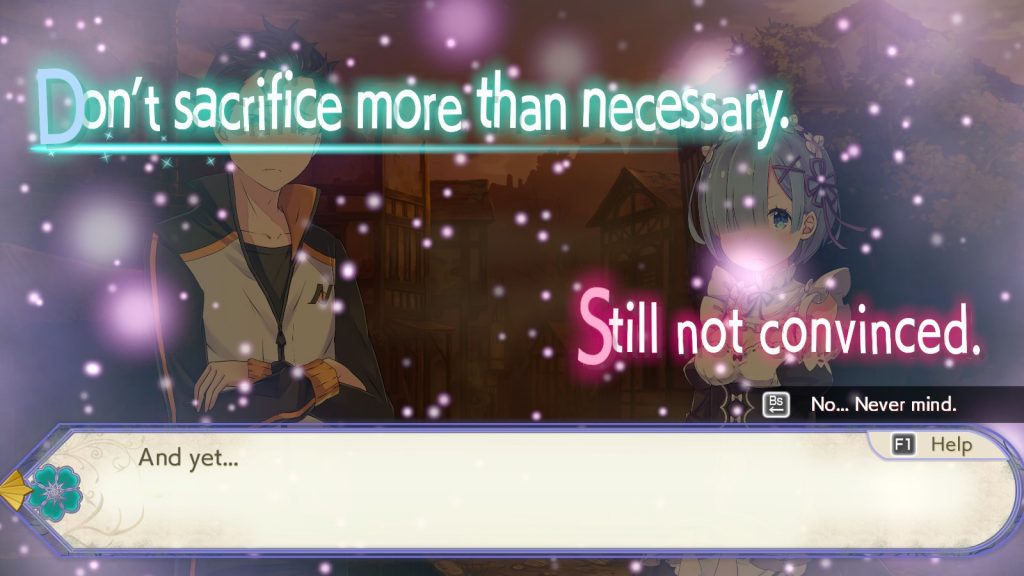 Decisions are important, but make sure you have the necessary information before making them!

A good 90% of the time, The Prophecy of the Throne is your standard visual novel. Spike Chunsoft’s official website labels this game as a “Tactical Adventure,” but I’m going to have to disagree with that. It’s definitely (mostly) a VN. And that means all you’ve got to do is push the “auto” button, sit back, relax, and enjoy the wonderful English voice acting. But, on occasion, it actually throws the VN stuff entirely in favor of a more player-involved approach. Turning into what I can only call an “adventure game,” these portions of the game place the player within a chibi-fied, strangely appealing 3D world. These segments are fairly short-lived and will have the player doing one of two things; generally back-to-back. First, there are “adventure mode” portions that revolve around gathering information. Fortunately (or unfortunately), you never really have to go very far to get what you need, as all of the necessary information is almost always within your immediate vicinity.

The second part of the game that takes place within this 3D world features a type of gameplay that I honestly don’t think I’ve ever played before. In fact, I’m not even sure how to describe it. You know how there are turn-based RPGs where your turn is comprised of a gauge, and you can do anything you’d like until the gauge runs out? Well, that’s what happens in this portion… except you’re solving puzzles instead of fighting. I know, I know, it sounds weird. But it’s not all that complicated, I promise. Basically, each of these scenarios that you find yourself in has a certain win condition that needs to be met within a certain number of turns. By interacting with the world around you and figuring out what needs to be done, you can successfully meet said win condition. There’s no actual fighting. You’re just wandering around and looking at things, and then waiting while the other NPCs take their turn after you’re done. It starts out pretty easy in the beginning, but, to my delight, actually gets more difficult as the game goes on. 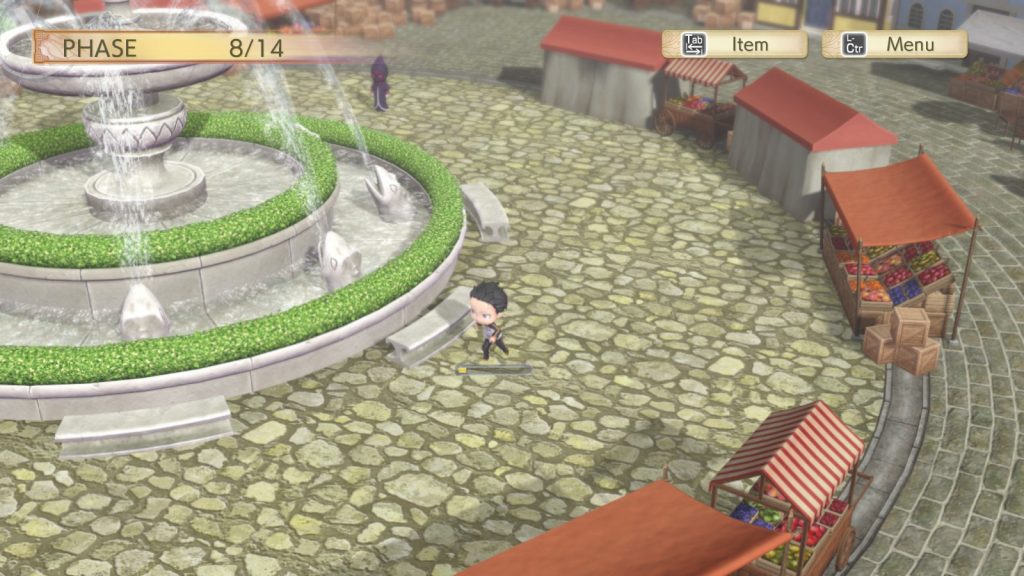 Keep an eye on that gauge!

I still don’t know exactly what to label this section of the game. But I do know that I had fun with it. We’ve gotten to the point where it’s becoming increasingly difficult to find gameplay mechanics that truly feel novel, and I really enjoyed what The Prophecy of the Throne had to offer in terms of its more hands-on portions. In fact, I actually would have preferred that the game had more of this. Don’t get me wrong, I like the VN parts just fine, but I really think that they could have made a game out of this alone if they had tried hard enough. It’s really that neat!

I still think that there’s more than Re:ZERO -Starting Life in Another World- The Prophecy of the Throne could have done to help itself stand out a bit more from the original Re:ZERO timeline, but, at the end of the day, it’s still a solid spinoff, and I think that fans of the series will like it. I know that, as a reviewer, I kind of have to review games, but, as someone who genuinely enjoys their time with video games and anime, I’ll say that I honestly had a lovely experience with Re:ZERO as a whole. It was great finally being able to sit down with the show, playing through the game was enjoyable, and I very much look forward to what the series has in store for us all in the future.

Full disclosure: This review is based on a copy of Re:ZERO -Starting Life in Another World- The Prophecy of the Throne provided by the publisher.