The Game We Need, But Don’t Deserve 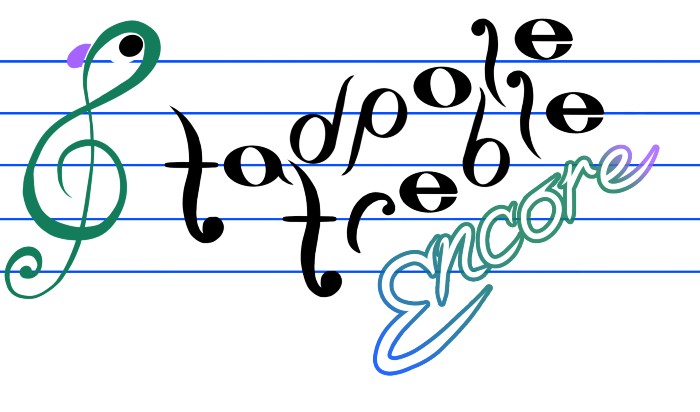 How is it possible that I’d never heard of Tadpole Treble before? As a lifelong band geek, this game absolutely should have been on my radar. Yet somehow, I missed it when developer BitFinity released it for the Wii U and Steam back in 2016. I opted in for a review of the Switch port, Tadpole Treble Encore, simply because it looked adorable and fun. And while I know I’m going to sound like a squealing fanboy over this, I’m going to power through it: Great Mozart’s wig. Rarely have I been blown away by a game as I was by Tadpole Treble Encore. I actually wish I didn’t have to tell you, dear readers, anything about this game so you could discover its magic all on your own. Sadly, as a reviewer, I can’t do that, but I will do my best to avoid any spoilers.

Conduct Yourself Properly, And You’ll Get Home 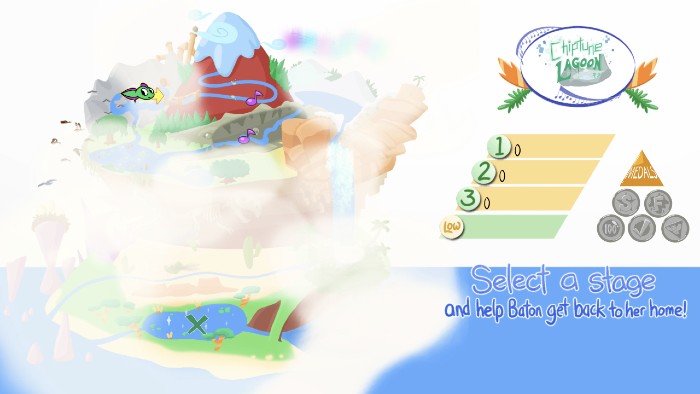 For those of you unfamiliar with Tadpole Treble Encore, it’s a rhythm-based action game. Players take control of the intrepid tadpole Baton, who has sadly found herself far from home. Over the course of twelve stages, it’s your job to guide Baton through musical challenges in order to make her way back home. The premise is fairly straightforward, but the execution is what makes this game shine.

Poor Baton Is In Deep Treble 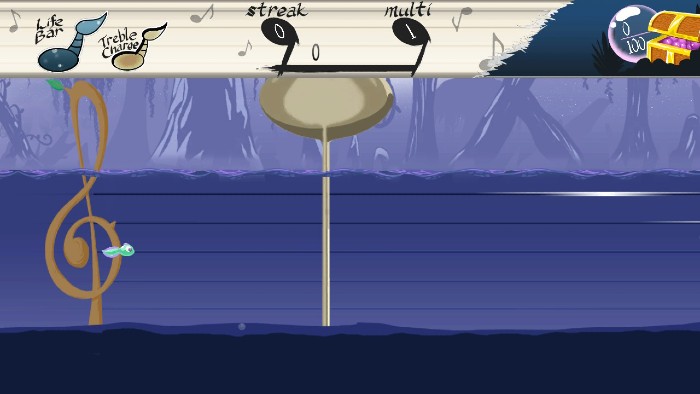 Standard rhythm games typically have you hit a button that corresponds with the music in the game. Tadpole Treble Encore instead has you dodging incoming music notes. Oh, and did I mention that each level is played on a staff? Because it totally is, and it’s an element of the game I immediately fell in love with. For those of you unfamiliar with what a musical staff is, it’s a set of five lines, with each line (and the space between them) marking a musical note, which run from A to G. The funny mark at the beginning of each line is called the clef, and it tells you which pitch the music is in. The symbol you see on the left of the staff in the image above is called a treble clef, hence the game’s name. A helpful way to remember the note names in treble clef is to spell out the “FACE” with one letter of each of the white spaces, starting from the bottom and moving up. 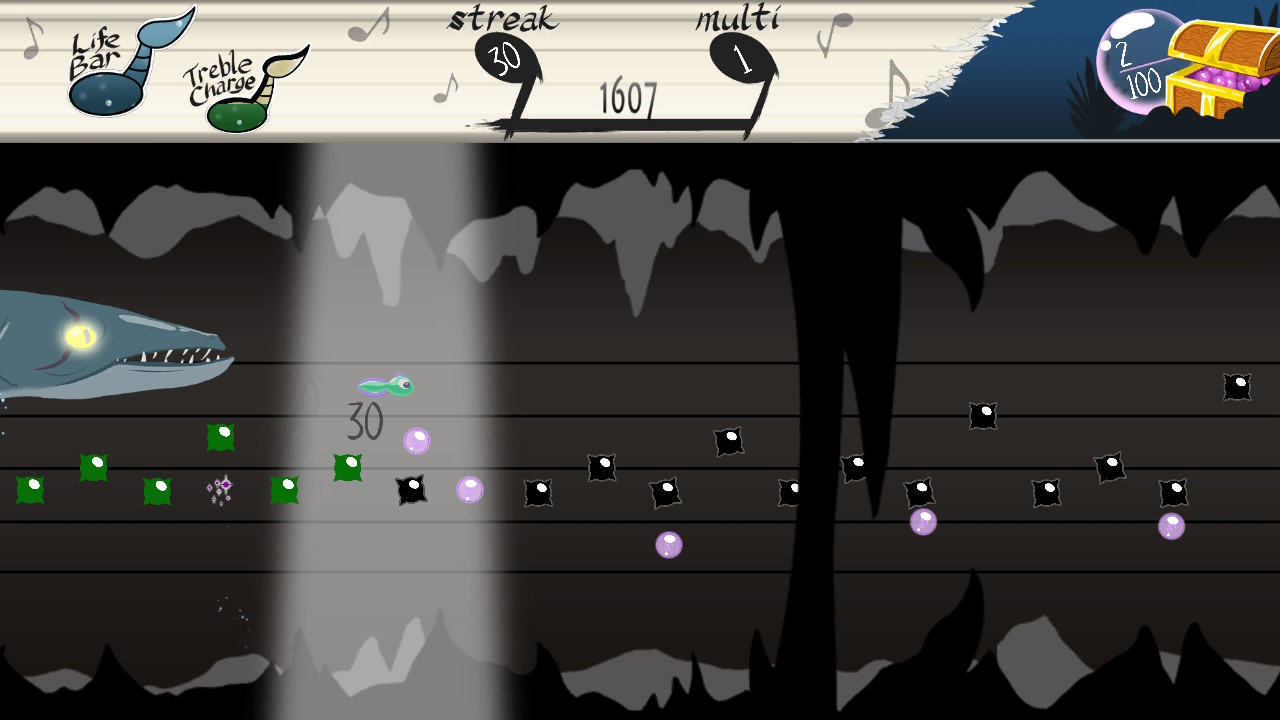 So why the little music lesson? Well, it has to do with how the game is played. Since the game is played on the staff, music notes will appear on the screen. Instead of trying to hit buttons to correspond to the timing of these notes, you’ll need to guide Baton up and down the staff, moving a note at a time. You’ll only move Baton vertically, never horizontally. If you accidentally hit one of the oncoming notes, you’ll receive some damage, and you’ll also break your streak. For all the notes and chords (multiple vertically aligned notes) that you dodge, your streak will rise, capping out at 30, and you’ll then earn 30 points per note successfully avoided. As your score builds, you’ll also build up a meter called your “treble charge,” which temporarily makes it possible to smash through the music notes and earn extra points. 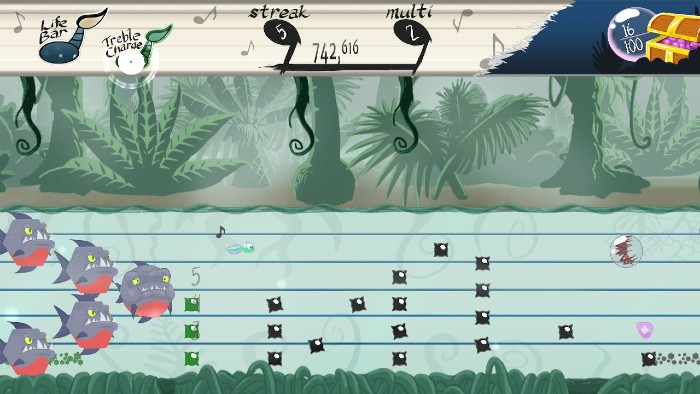 Controls are simple and very intuitive. Really, there are four things you can do: move up, move down, attack, and use your treble charge. You can use the D-pad or the joystick to move up and down, the A or the shoulder buttons will allow you to attack (with a very satisfying clapping sound), and you can hold the A button down to activate your treble charge once you’ve built up the meter enough. The attack button is important, not because you’ll frequently find yourself attacking foes, but because it helps to earn you even more points if timed correctly. Throughout the levels, you can find items that can be hit in time to the music for additional points. Additionally, there are golden orbs that, if you hit at the right time, will trigger an action normally unavailable to you, as well as increasing your score multiple by 1 for each one hit. 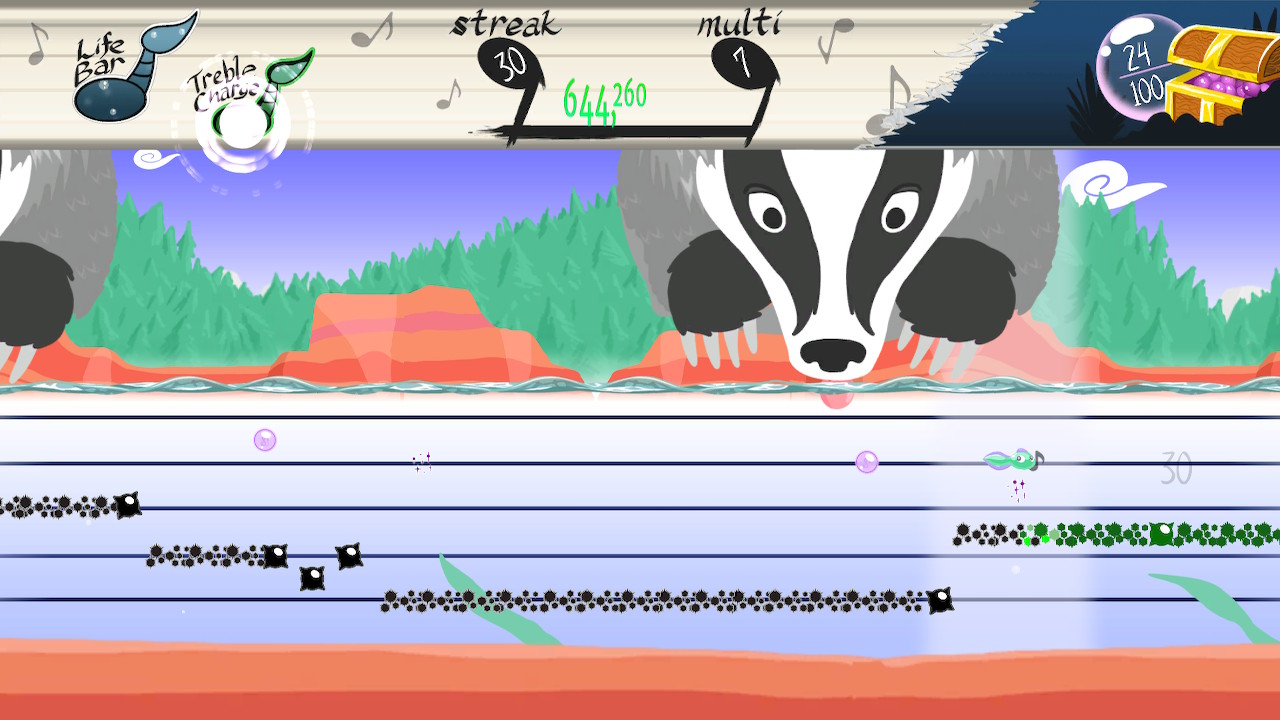 Tadpole Treble Encore’s art style is absolutely perfect for this game. It’s got this almost painfully charming hand-drawn quality, and the animation runs very smoothly. I never once noticed any hiccups or stuttering. There’s a loving attention to detail, from Baton herself to the environments to the predatory fish that sometimes chase you. Badgers lap water from the creek, bears pluck fish from the river, and jellyfish dance across your path. Every level has its own aesthetic, quite literally, no two levels ever alike. The story itself is told in panels, almost like a concept board or comic book, and it works extremely well.

This brings me to the level designs themselves. I think that even if the levels all followed the same basic formula, they’d be plenty enjoyable. And yet, the developers managed to make every level feel completely separate from one another. Without giving away too much, I can tell you one level will have you moving backwards, another is inspired by chiptunes and looks beautifully retro. Still, another has you finding ways to get out of the water to avoid taking damage.

Bassooner Or Later, You’ll Get There! 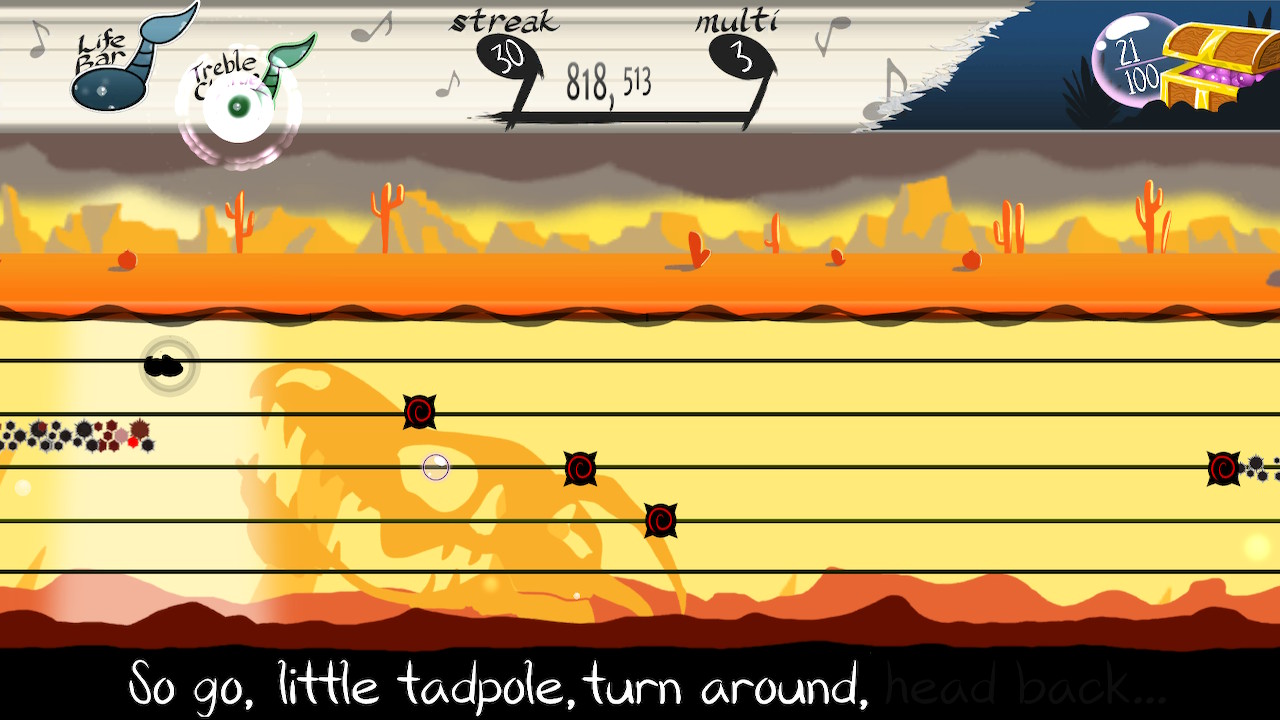 So that leaves me with just the music left to discuss. Where to begin? As a classical musician myself, I’ll admit to paying attention to a game’s soundtrack a little more critically than is probably fair. With that said, I can’t find a single criticism for this game’s music. Each level has its own unique soundtrack, and watching the notes literally come to life on the staff makes it feel like you’re swimming in a sea of sheet music. And the variety! Heartstring-tugging piano, jazzy clarinets, rocking guitar riffs, it really has a bit of everything.

At the risk of being extremely corny, it literally made me feel things. To the point that I downloaded the game’s soundtrack off of Amazon. As a purely dorky aside, my favorite level was Turtle Pipes, simply because it featured the bassoon. The bassoon is my instrument (and the best instrument, in my totally biased opinion), and hearing it get a special spotlight in this game only made it that much more endearing. 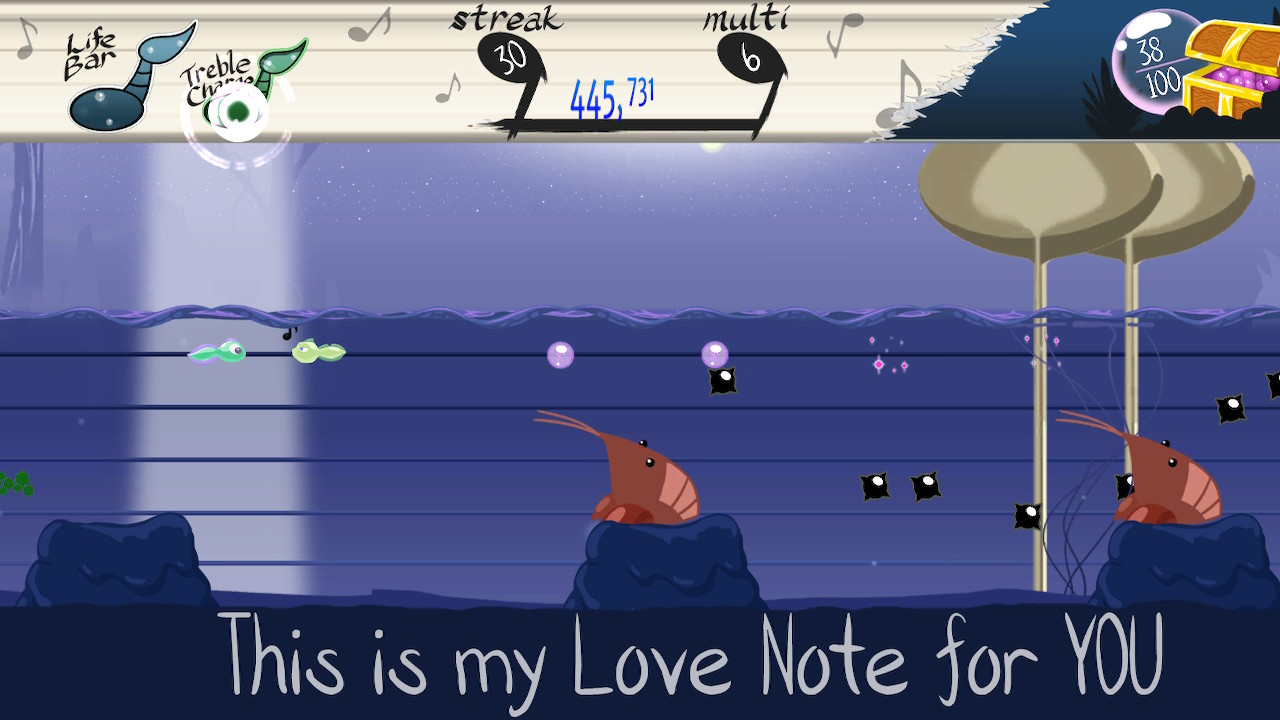 There is plenty of replay value to be found. Although you can likely make your way through all the game’s stages in one sitting, that’s not the end of your musical journey. After beating the game, you’ll unlock “Concerto Mode,” which allows you to play every level in a single run, which is a fun challenge. There are also five challenges for each stage: receiving an S rank (based off score, receiving an F rank (much harder than you’d think), managing to snag all 100 pink bubbles strewn across each stage, finding the challenge fly (something I’ll let you discover on your own), and simply beating the level. There’s also a “Composition Mode” which lets you create your own levels and tunes.

Honestly, and I don’t say this often, if ever, I have almost no criticism for this game. My single criticism is that I wish it was longer, and that’s just me being greedy. I want more to immerse myself in, more music to just get lost in. With everything the world has been through in the last year, Tadpole Treble Encore is the game we need. It’s nothing but feel-good, charming, moving fun. I cannot recommend this game enough for any music lovers out there. I’ll certainly be revisiting this game a lot in the near future. In fact, you can probably find me spending an inordinate amount of time trying to recreate the bassoon music from Turtle Pipes.

Haven’t We Played This Before? Rune Factory 4 was initially released on the 3DS in 2012. (Though it didn’t make its way to the US until 2013) We’re nearing…