When I’m Around You, I Kind of Feel Like I’m on Drugs 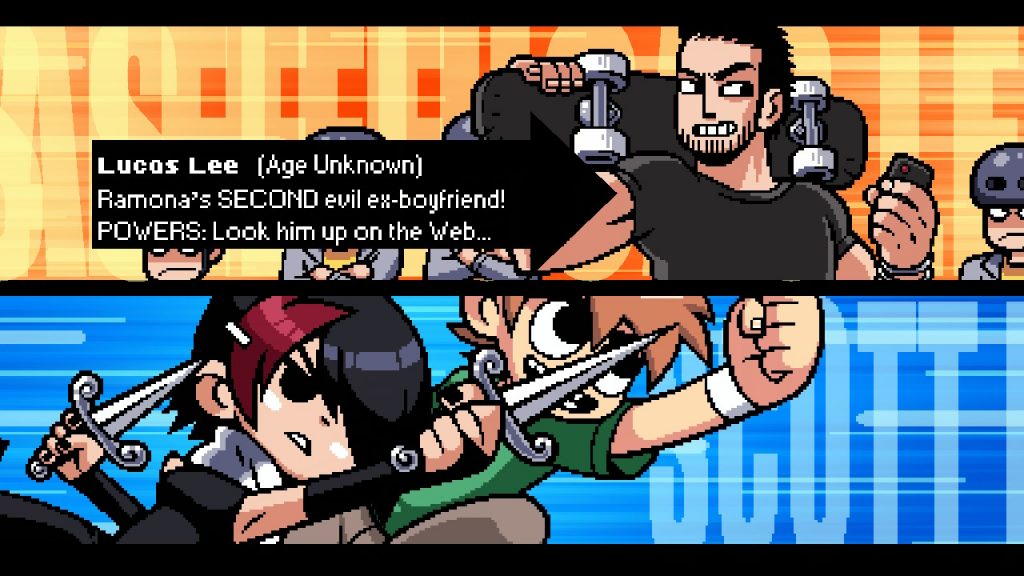 As a longtime gamer, I often get most passionate about games I couldn’t have. The original Scott Pilgrim Vs. The World game was on two systems I didn’t own. Which meant I only got to play it at a friend’s house. Long story short, I was quickly charmed by the style of the game, and grew rather fond of it. I just never thought I’d be able to own it myself. Fast forward several years later and Scott Pilgrim Vs. The World – Complete Edition got announced by Ubisoft, much to my shock. Since I wanted to put my money where my heart was, I wound up buying myself a digital copy of the game the day after it came out, and then ordered a shiny physical edition from LRG soon thereafter. The real question is, was this game worth the wait? Well, it’s a bit of a complicated story… 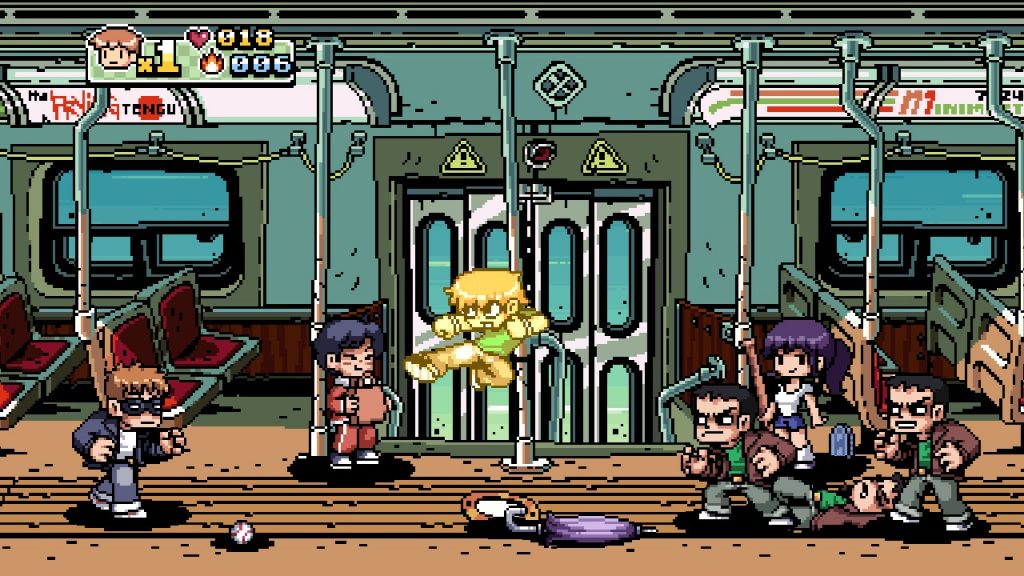 First things first. Scott Pilgrim Vs. The World – Complete Edition is still an absolutely beautiful game. While it’s very true Ubisoft owns the rights to it, I’m aware that the team that originally developed it was Tribute Games. They are simply wizards with retro artwork, and that’s especially evident here. This game has many visual similarities to Mercenary Kings Reloaded, which is also stunning. There’s just a ton of small details peppered in everywhere, from the smirks on enemies’ faces to ads on the side of buses. It’s colorful, full of character, and a joy for the eyes. There’s tons of different foes you’ll face, so you won’t get bored by the hordes wailing on you. And don’t even get me started on the pure joy that is the soundtrack. 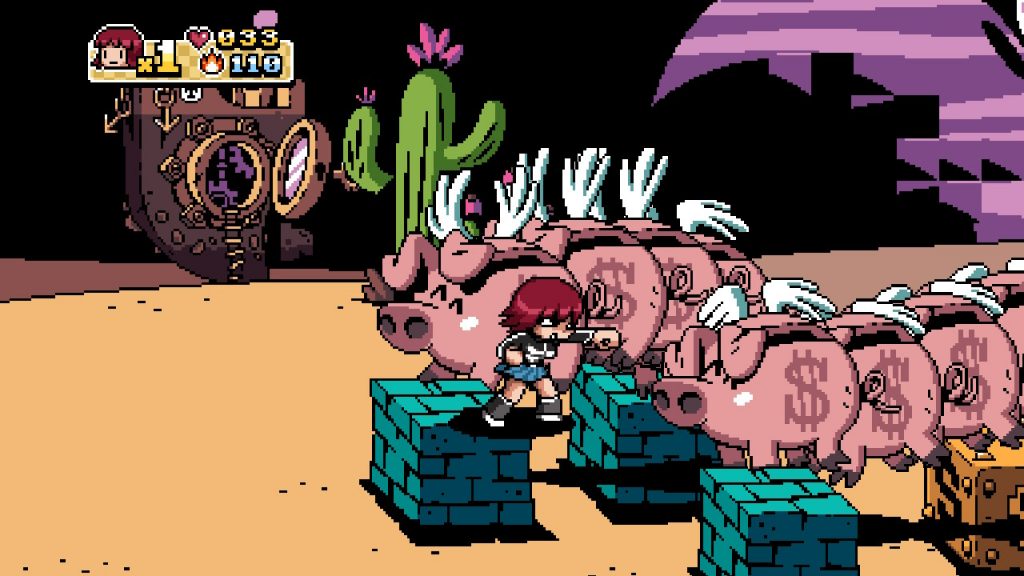 Also, and this is important – Scott Pilgrim Vs. The World – Complete Edition feels extremely faithful to the source material. Which is funny coming from me, since I saw the movie before I read the Oni Press comic. Regardless, I love both, and am really happy that the themes and style of Scott Pilgrim is translated effortlessly here. Kim is sarcastic, the sinister boyfriends are equal parts douchey and dastardly, and the pop culture references are plentiful. There’s stuff here from Mario 3, Street Fighter, Mega Man, Knight Rider, and a whole host of other touchstones. That may seem incidental to some, but it shows that there was a sincere effort made to do justice to the series. And that’s frankly a big part of why I was so excited to play the game again.

I Had This Totally Weird Dream… 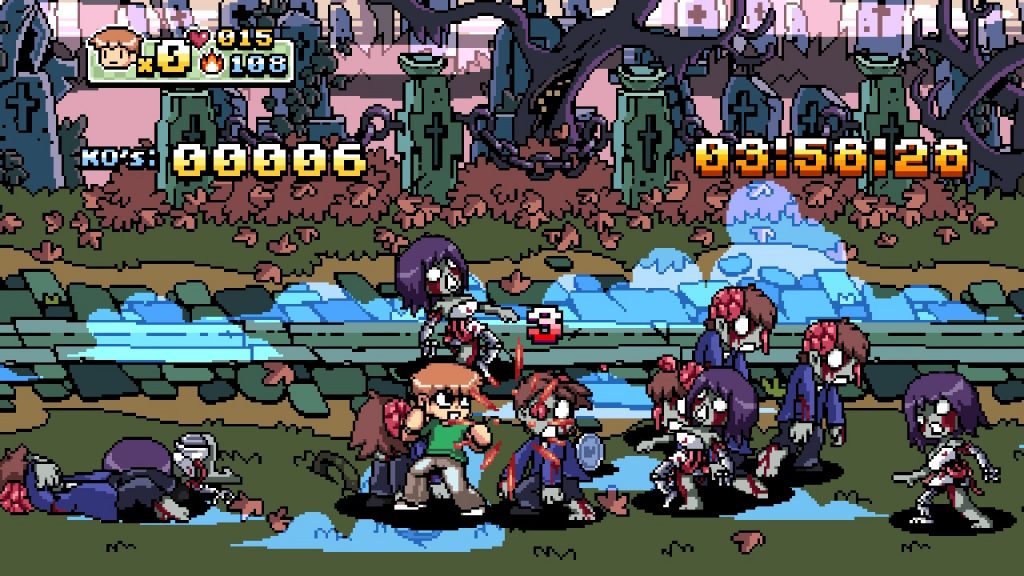 Since it’s called Complete Edition, you can rest assured that everything is here, including the Knives Chau and Wallace DLC. Besides the Story mode, there’s also Boss Rush, Survival Horror, Volleyball, and Battle Royal. I did try out most of the optional modes, but found they were somewhat lacking in content. It’s not that fun to beat up zombies when they keep reanimating and knocking a volleyball around proved a silly diversion. The Boss Rush is fine, but it’s also quite challenging. And the Battle Royal appeared to only be playable with a local friend or two, which was impossible for me to try out in the current pandemic climate. But honestly, I don’t mind all that, since I play most games with a mind for single-player.

I Was Just a Little Bi-Curious 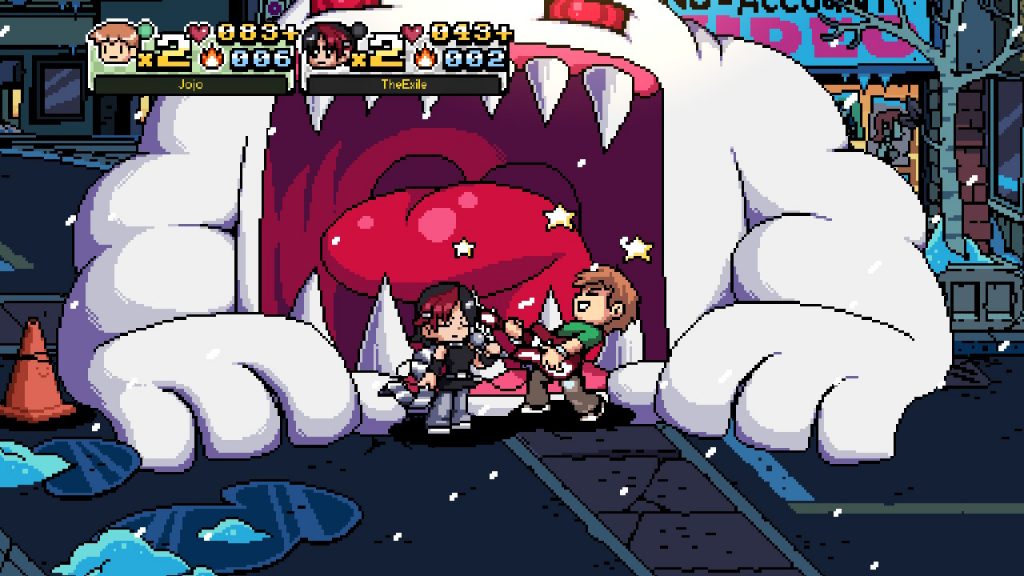 The Story mode in Scott Pilgrim Vs. The World – Complete Edition is a standard beat ’em up affair with some twists. You work your way across the wonderfully retro map of Toronto, fighting through stages and powerful end bosses. Each stage is rather long and many have multiple, utterly distinct sections. If you’re lucky, you’ll find a shop selling food in the interim, which can not only help regain your health but provide temporary stat boosts as well. I love that idea in theory, but there’s one big issue – when you’re shopping, you can’t see the stat gains until after you purchase them. That meant I was always flying blind, and wound up spending my money on the more cost-effective items. Thankfully, you can also purchase snacks for the road, which heal you when your HP ticks down to zero.

I Mean, Are You Really Happy or Really Evil? 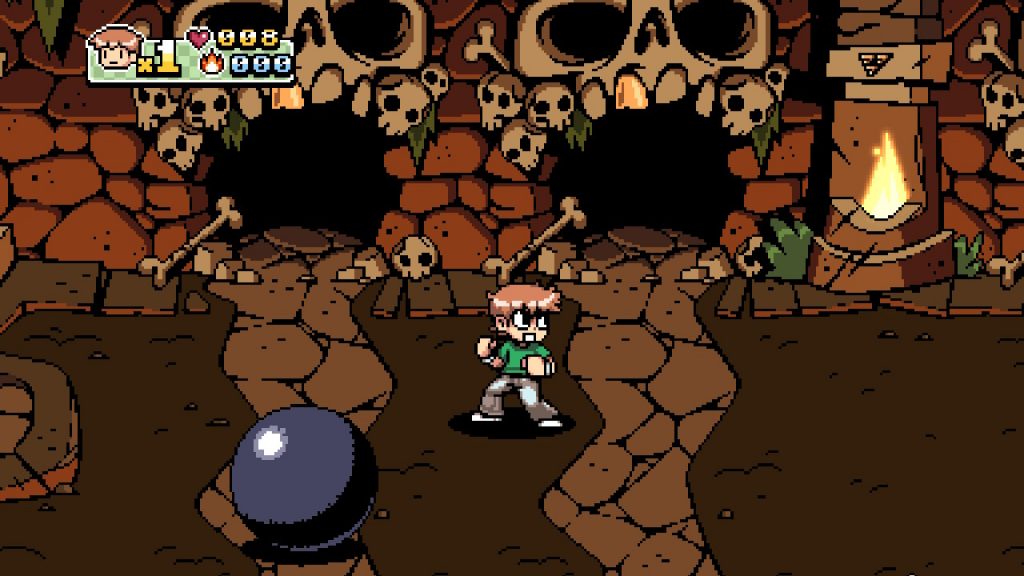 Another handy thing is that as you play, your character levels up. This not only boosts their base stats but also lets them learn new moves and skills. You start out pretty basic, but can eventually do things like counter attacks, multi-hit combos, aerial kicks and much more. Again, I love that idea in theory, but I have one issue. Namely, I wish that each of the different characters had different skills and attacks. It just makes sense to me that with a roster this distinct in a game about quirky personalities, they should have distinct attacks. That’s pretty much not the case, sadly. There’s small differences between their stats, and the way they summon strikers can vary, but otherwise they’re basically carbon copies of each other. Admittedly I haven’t spent time playing as each and every character, but from what I’ve read online in guides, that indeed is the case. It’s a shame frankly, especially since having different movesets would make the multiplayer elements much more entertaining. 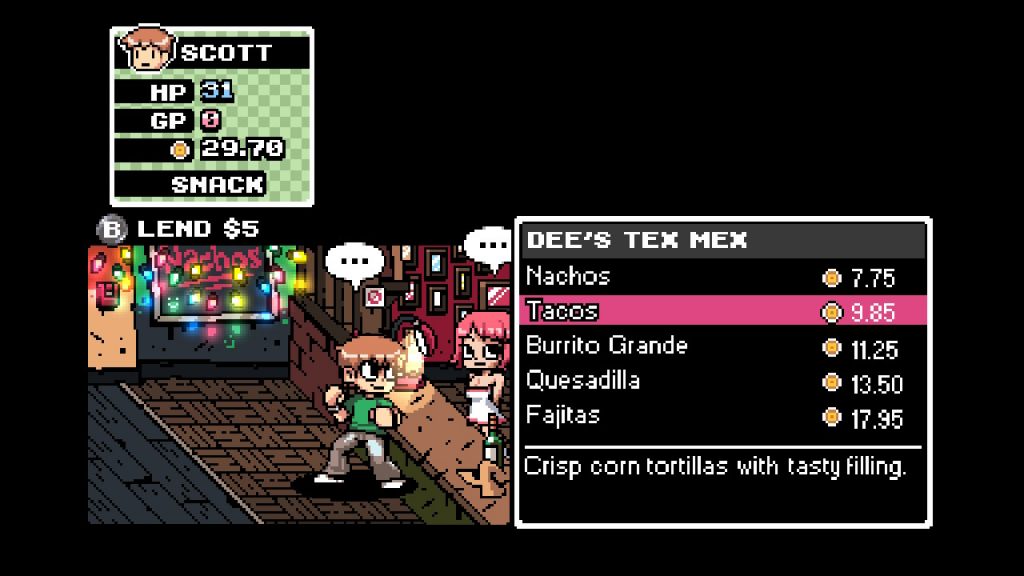 Any good beat ’em up is made better with a friend, and I hoped that would be the case with Scott Pilgrim Vs. The World – Complete Edition. After all, it allows co-op with up to 4 players, locally or online. While I couldn’t try the local option, I did spend some time playing with my friend Exile online. The first hurdle I had to get past was that the game requires you have an Ubisoft account to access the online features. I was a bit perturbed by that but acquiesced. Online multiplayer is pretty fun, even though the AI goes after you hard when you’re trying to revive your buddy and generally throws double the enemies at you. Unfortunately, the online stability in the game still needs a lot of work. Cause while it was a blast to team up with Exile and make our way through stages, there’s a lot that needs patching up. First thing that happened was the game warned me up-front that my connection with my partner wasn’t great, and the warning itself paused my game until I dismissed it. Beyond that, the online suffers from heavy lag, with a couple of seconds difference between when I pressed a button and when an attack occurred. This made it nearly impossible for me to run around with rapid presses of the joystick, which is my preferred method of attacking. I also found items would randomly fly about when I was online, often when neither me or my partner had hit them. More problematic is that friendly fire is very much an issue. More than once I would throw an item to hit a foe, and it would ricochet and hurt my partner too. I even found I couldn’t enter a shop once that my partner had no issue walking into. These all need to be dealt with stat, since they impair what should be a highlight of this experience. On the plus side, this version of the game makes it so starting with a new character doesn’t default your level to 1.

You Once Were a Ve-gone, But Now You Will Begone 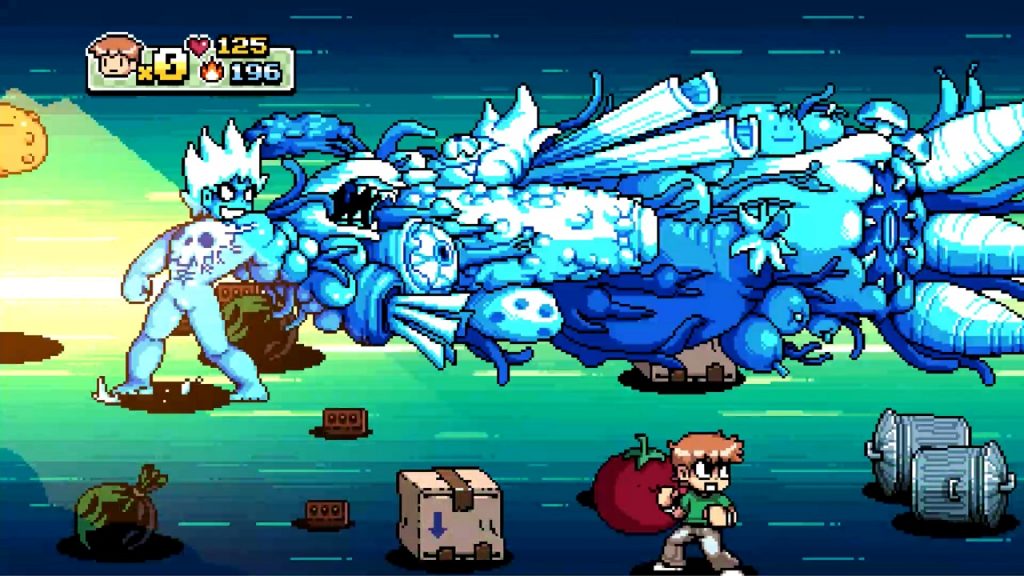 Likewise, the combat in Scott Pilgrim – Complete Edition is a mixed bag. I like leveling up and getting more complex moves, but felt the AI was unfair. They’ll often attack you from off-screen, especially when you’re in the middle of pummeling someone else. It’d be one thing if they had audio cues warning you, but there’s nothing. Also, the physics in the game are odd. One good example is when I jumped up to kick a foe, somehow landed on a thrown barstool in midair, and then it just sat there for a while. I do appreciate how you can resurrect yourself with excess Gut Points, but wish there was a way to generate GP other than eating food from shops. And though it’s cool you can start glowing and get stronger and faster when you hit several foes without taking damage, it was a pretty rare occurrence for me.

You Will Pay For Your Insolence! 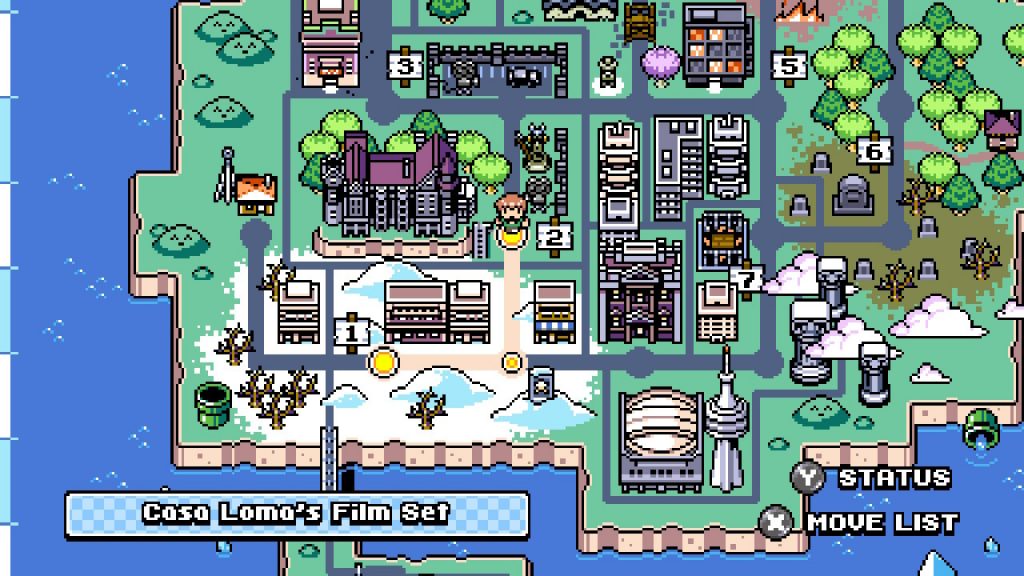 Another issue I had was how long the levels are. It’d be one thing if reaching a new section would let you start over from there, but you always have to start over from the beginning of the stage, at least until you’ve beaten it completely once. That may not sound bad, but these are pretty long levels full of foes. I love the set pieces, but they wear thin when you see them again and gain. Pretty much the only saving grace is if you level up after a long stretch, since doing so fully heals your character, but that’s not anything you can rely on consistently. Oh, and did I mention I had all these issues on the easiest difficulty? I’m not ashamed to admit I’m not amazing at beat ’em ups, but even so, I feel the balance here isn’t ideal.

Next Time, We Don’t Date the Girl With Eleven Evil Ex-Boyfriends

Despite my issues with several elements here, I can’t help but feel fondness for Scott Pilgrim Vs. The World – Complete Edition. I absolutely never expected this game to make a comeback. And even though there are issues that still need addressing and fixing, I feel this is a game fans will still enjoy. Hopefully, Ubisoft takes the time to make some positive changes. If they do, this will go from an average game with amazing ideas to a truly great game. And honestly, I feel that’s what fans deserve after so very long.