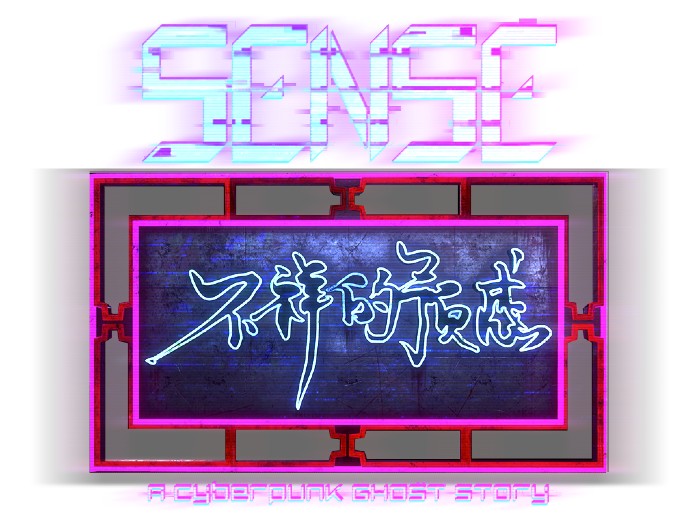 I love all things horror. Movies, books, TV shows, games, I want all the horror. So I was pretty excited when I got the opportunity to play Suzaku’s Sense: A Cyberpunk Ghost Story. I was drawn to the promise of a game inspired by old-school adventure and survival-horror games. But does Sense live up to the hype?

Apparently, Nobody Picks Up Their Trash in The Future, Either 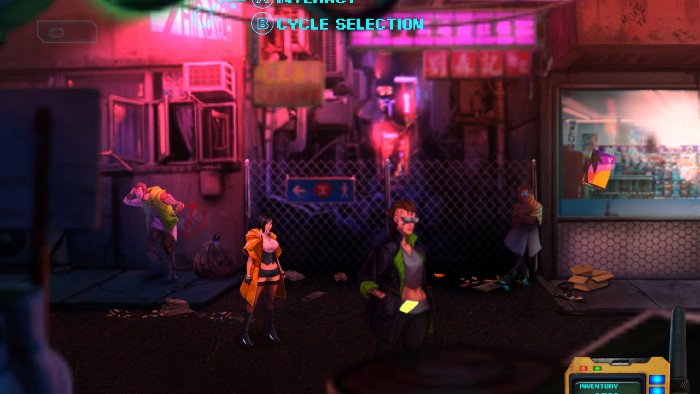 Set in the year 2083 in Neo Hong Kong, Sense follows the trials and tribulations of a young woman named Mei Lin Mak. The game opens with Mei on her way to a date at a local bar. Along the way, she’s sent sprawling on the pavement by a person rushing past. It’s here we learn that Mei has cybernetic eyes. Picking herself up, she heads into the bar to see if her date has arrived. While waiting, she starts seeing things that can’t possibly be there.

It’s here that the story and the game really starts. Excusing herself to the restroom, Mei checks out her eyes, and, determining that nothing is wrong, heads back out to the bar. Somehow, she totally misses the apparition that appears in the mirror. As soon as she leaves, though, it’s clear that something has gone terribly, terribly wrong. The other bar patrons are nowhere to be seen, trash is piled all over the place, and the bar suddenly looks as though it’s been abandoned for years. Which, as it turns out, is exactly what happens. 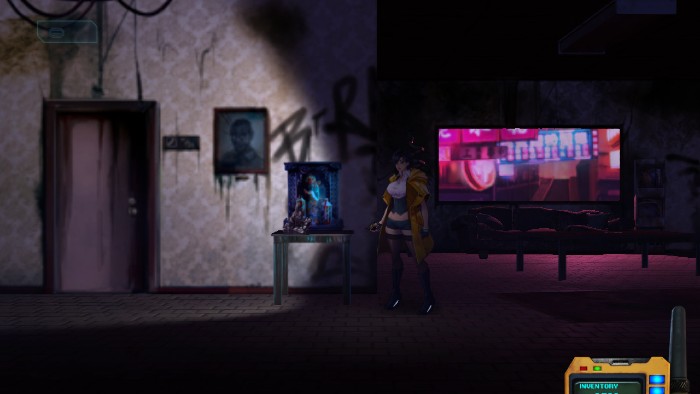 Somehow, Mei has found herself transported one hundred years into the past. She’s still in the same building, but somehow, it’s now 1983. Chased by gruesome specters, and locked in the building, the only place Mei has to go is up. It’s the player’s job to guide her up, floor by floor, ensuring she doesn’t fall victim to the sinister forces inhabiting the building.

Normally, I wouldn’t dive too deep into the story in the review, as I prefer letting players discover it on their own, but honestly, I’m not entirely sure what the story here was supposed to be. There are countless references to Cantonese folklore, and unfortunately, unless you’re fairly familiar with it, I feel like a lot of what’s said is just going to go straight over your head. At least, it went over mine. I followed along with the basic premise, but they spoke a lot about some pretty specific cultural folklore, without a “Cantonese Folklore for Dummies” to go with it. If you like doing additional research while you’re playing a game, this won’t be a problem for you. Unfortunately for me, it did break the immersion some.

Set In The Future, But Also The Past. Kinda Like Star Wars. 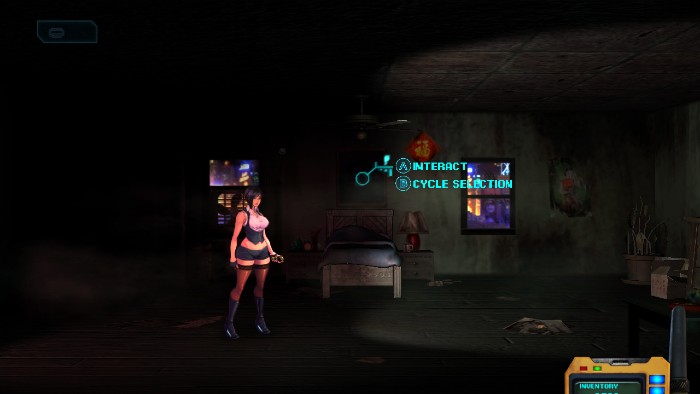 The gameplay in Sense is very reminiscent of old point-and-click adventure games. You can only interact with certain items and elements of the environment. You can tell which elements you can interact with by the big, bright-blue button prompt on the screen. These big, obnoxiously bright prompts annoyed me at first, but honestly, after a while, I realized it actually fits in with the cyberpunk aesthetic of the game. Like those old point-and-click games, there’s a lot of “find item A, take to place B.” Which isn’t necessarily a bad thing, but it does get repetitive when you don’t have an easy way to traverse between each floor for the majority of the game. There are times when I quite literally rolled my eyes in exasperation from knowing that I had to go from the fourth floor all the way back down to the first, and had to take the most difficult route to get there.

Do You Not Have a Hallway of Hair in Your Apartment Building? 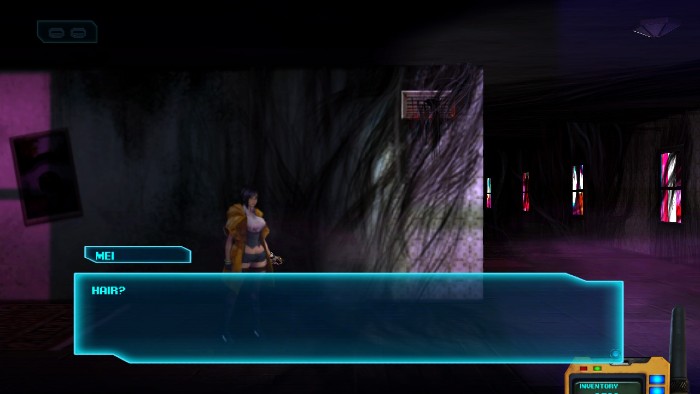 Although the exploration is, at times, repetitive and boring, I think Sense makes up for it with the atmosphere it creates. No two rooms look alike, each carefully crafted with its own creepy elements. And although the game is side-scrolling, more than once something creepy in the foreground would loom out of nowhere and make me jump. And then I’d realize that it was nothing more than a fan on a table. There are times where you won’t even notice a creepy entity peeking around the corner of an apartment door until it’s whipping back and slamming the door shut. Honestly, I wish I could tell you about some of the specifics, but the surprise of some of the areas would be ruined.

Yes, There Are Sexy, Possessed Mannequins 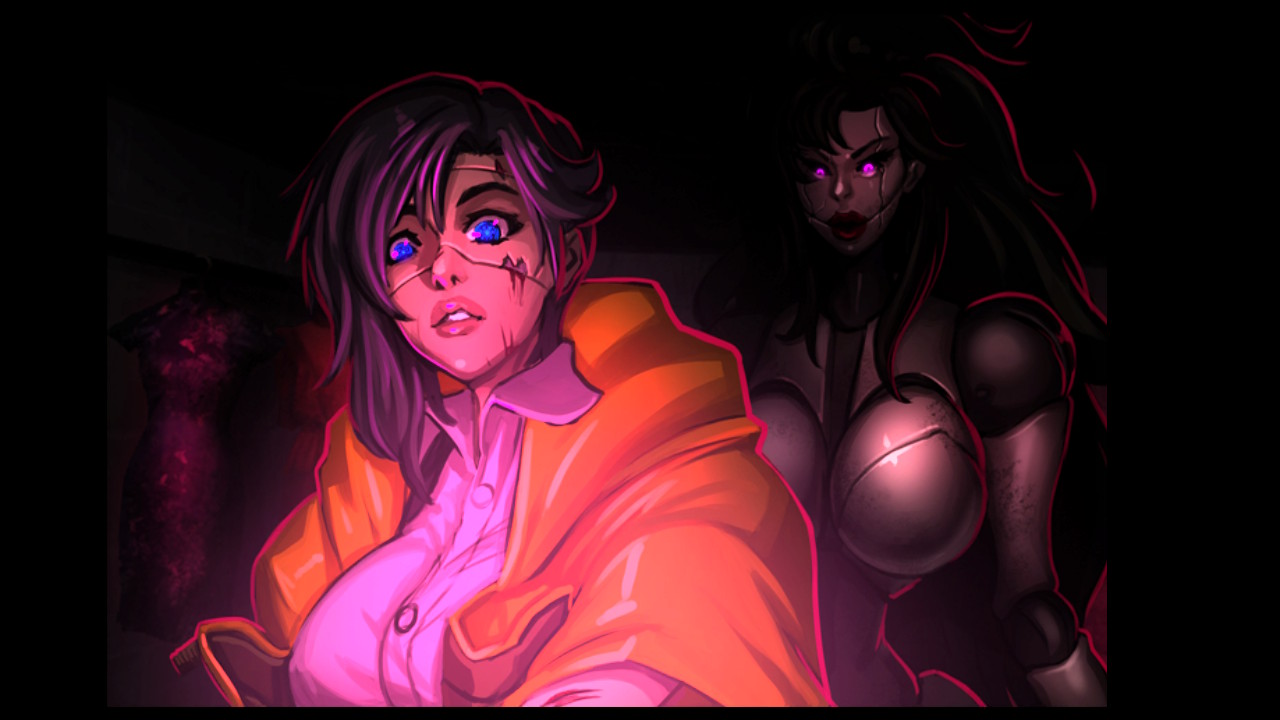 Which leads me to the best part of the game: the ghosts. I absolutely loved their design. Some were creepy, some were horrifying, and some were delightfully disgusting. There are fourteen major spirits you’ll encounter in the building, each with its own unique look and actions. Although at one point you’ll be able to attack lesser spirits to ward them off, for the majority of the game you’ll instead have to avoid them. Sometimes that just means running away. Sometimes, the prudent choice is to hide. I definitely got some Clock Tower vibes from the few times I had to hide behind specially warded doors. I actually wish they would have implemented that mechanic a bit more, since you only end up doing it a couple of times. Additionally, you can find jade bangles and equip up to two at a time, which will take damage in place of Mei should you be unable to dodge a spirit’s attack. 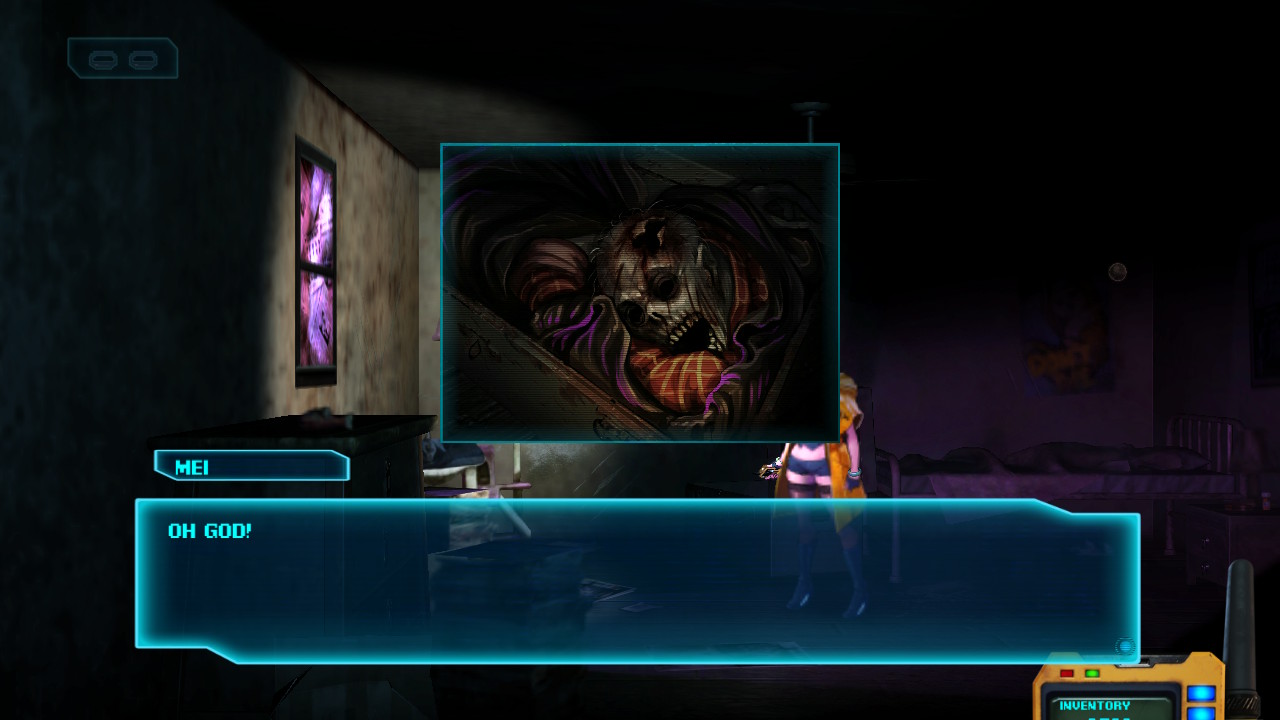 Controls for the game aren’t particularly complicated, though they somehow still end up being clunky. The left joystick will move you left and right, while double tilting it will make you run instead of walk. Or you can simply press the L button, which was much easier, in my opinion. You can interact with items/environmental elements with A when prompted, and if there are multiple things to interact with, hitting B will cycle through them. When you gain the ability to attack, X will swing your sword. Even though the controls are pretty simple, they just didn’t feel smooth. I’d end up running when I really wanted to walk, or walking when I wanted to run. You had to be lined up just right to trigger the prompts sometimes. Fighting was easily the most clunky part of the game. You can swing your sword once, and then you have to wait for the animation to complete before you could swing it again. And it took me a while to figure out that you wouldn’t actually cause damage unless a prompt with the “Attack” appeared on the screen.

The Lion, the Witch, and the Audacity of This Bitch 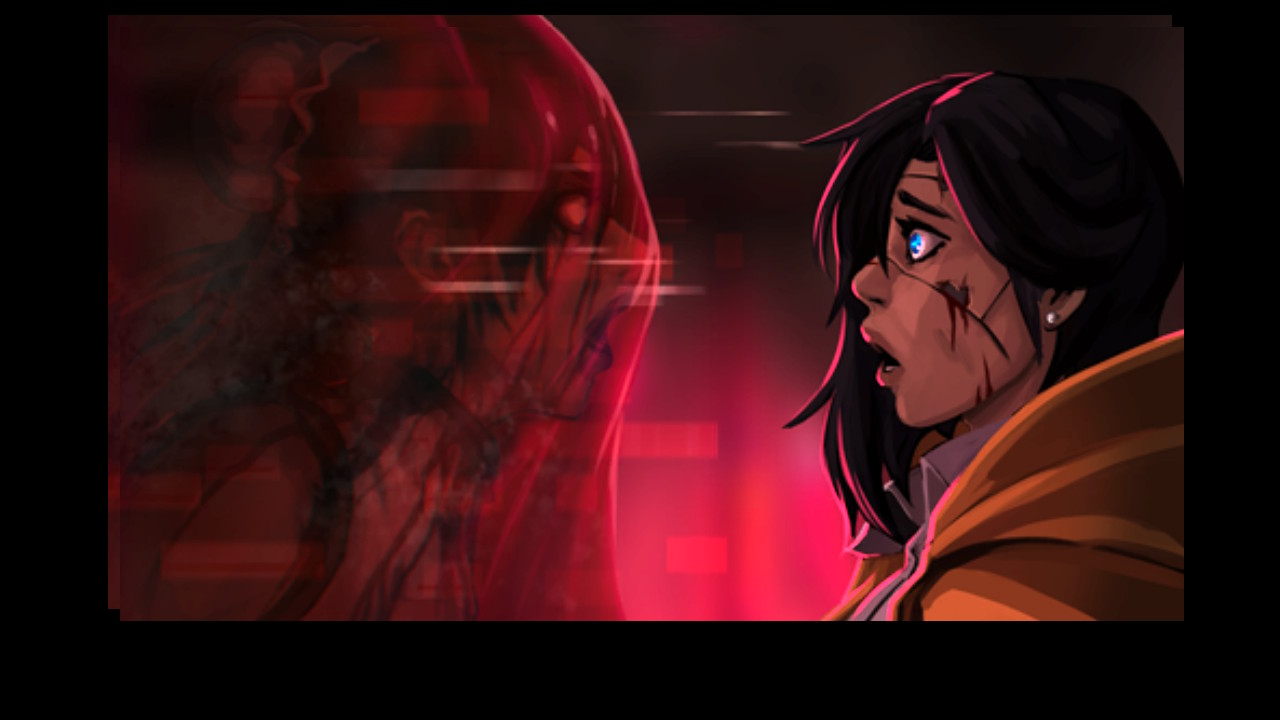 The art style of Sense is good, but unfortunately, inconsistent. Mei is unfortunately blurry, as are some of the spirits, while others are rendered in incredible detail. Comic-book like scenes are seen when certain events are triggered, and again, some are crisp and gorgeous, and others are blurry or fuzzy. There doesn’t really seem to be any rhyme or reason to it. I will say that when it’s good, it’s really good. It blends horror and cyberpunk surprisingly well and really helps convey the utter creepiness of the building Mei is trapped in.

Overall, I was left a bit perplexed by my time with Sense. I don’t regret playing it, but I also don’t know that I would go out of my way to play it again. With the story largely told through journal entries and letters that you pick up along the way, and with so many references to folklore I simply had no knowledge of, I was left without a particularly satisfying conclusion. Especially considering it feels like they left it open for a sequel. Combined with clunky controls, inconsistent graphics, and, most, unfortunately, instances of severely lagging frame rates, I can’t say that it was a great game. But neither can I say it was a bad game. If the developers went back over it and polished it up a little more, it could go from mediocre to a solid horror game. Unfortunately with the game currently having a $19.99 price tag, I don’t think I could honestly recommend the game for that price.

Ding! Dong! The Witch is back! Yuppie Psycho has always been on my radar but never on my wishlist — don’t get me wrong, it always looked amazing from…