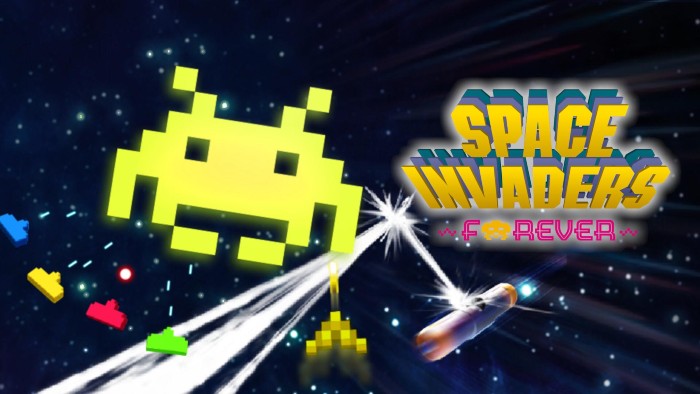 We’ve been shooting invaders from space since 1978 and with good reason. Space Invaders is a classic. Frankly, it’s virtually impossible to say anything negative about a game that arguably led to the creation of an entire video game genre. Some might think of it as too simplistic these days, especially when compared to bullet hell shmups; however, Space Invaders is shooting in its purest form.

Much like anything else, games have to evolve to stay relevant, and Space Invaders has followed suit, sometimes with surprising results. As a collection, Space Invaders Forever includes the bona fide classic Space Invaders Extreme, the surprisingly logical mash-up Arkanoid vs. Space Invaders, and the retro-influenced, multiplayer-focused Space Invaders Gigamax 4 SE. I have to admit that it had been a long time since I had checked in with the series, so I was only familiar with the first title. 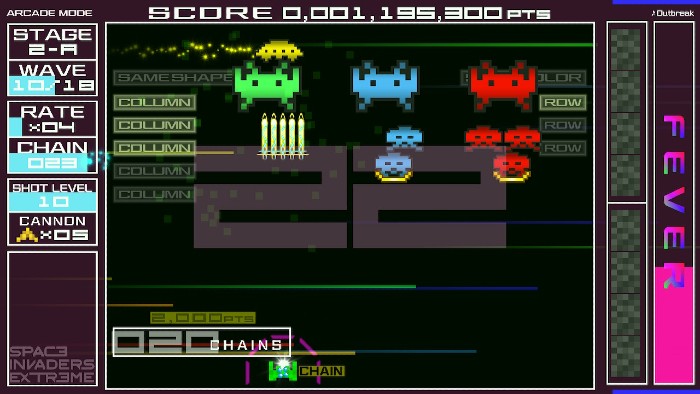 Space Invaders Extreme (SIE) first graced our presence back in 2008 on the Nintendo DS and PSP. This port is based off the 2018 Steam version, which basically gave it a fresh coat of paint, an audio tune-up, and online leaderboards. Aside from that, the core game remains the same.

And that’s just fine because the core game has held up surprisingly well. Yes, it’s still Space Invaders (move ship, shoot invader, repeat), but the invaders have been overhauled. Each invader has a different firing style. Some invaders split when damaged. Other invaders have reflective shields. Some of them even explode. There’s a wonderful variety of invaders, bosses, and attack patterns to keep you busy and on your toes.

Fortunately, your ship’s armament has also been improved. Shooting four invaders in a row of the same color awards you with a weapon. There’s a long-range laser, a bomb shot, a wide shot, and a shield. Knowing what weapon to use is an important part of the strategy. The laser is slow but reaches the top of the screen. The bomb is useful for taking out groups, but it explodes the second it hits. So, even if invaders are encroaching on your position (or the bottom of the screen), it might be better to pick off other ones first if it nets you a suitable weapon. 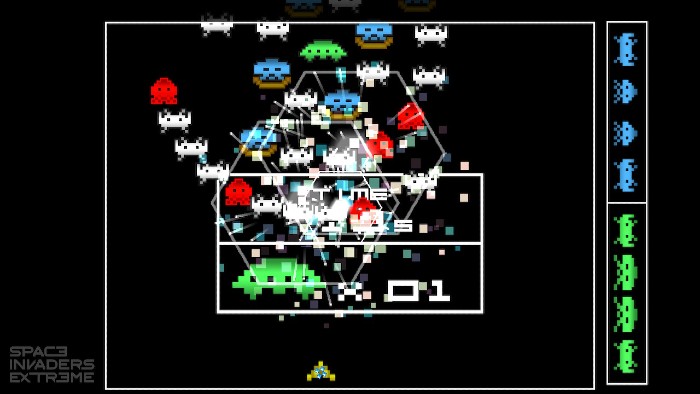 Another edition is the bonus round, accessed by shooting a flashing UFO. After completing a specific goal in a brief amount of time, you’re awarded with Fever Time, a weapon that lets you easily cut through enemies. It’s possible to get through multiple waves at a time with this weapon, but it’s not easy to get. Successfully completing a bonus round requires quick reflexes and a bit of luck. You can also increase your score by following on-screen instructions, but I was far more concerned with just surviving.

Space Invaders Extreme also sports flashy background effects, neon lights, and a pulsating electronic soundtrack accented by your shots. It’s reminiscent of Lumines. The backgrounds got a bit busy for my liking, but you can turn them off in the options. It got to be a bit much over the course of the game’s sixteen levels. All the explosions and lasers were more than enough for me. 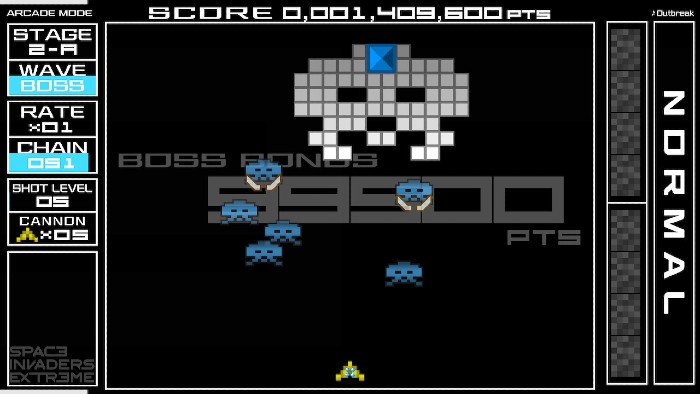 While SIE is a great game, I do lament the exclusion of any sort of local co-op mode. The original version had it, and the Xbox Live Arcade version allowed for four players in arcade mode. Online leaderboards help increase the game’s lifespan, but I wish there were more content. The game’s DS sequel is sadly missing as well. 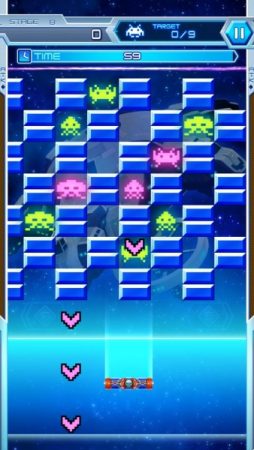 Arkanoid vs. Space Invaders (AVSI) is a mashup of both games that works surprisingly well. Originally released as a mobile game (it’s still available), players control the Vaus, the paddle-shaped ship from Arkanoid, and use it to reflect projectiles back at the invaders. Arkanoid’s blocks also make an appearance, and they frequently act as barriers for the invaders. There’s even a cheesy story about defending the universe from the invaders. It’s silly, but it does give the developers an excuse to create missions and power-ups.

I initially found AVSI’s gameplay frustrating. Arkanoid takes the stage in terms of gameplay, and I was expecting the game’s flow to be fairly chill. After all, it’s Arkanoid: you bounce a ball at bricks, get some power-ups, and break some more bricks. While all of that is still mostly true here, this is more like Arkanoid after a few cups of espresso. That’s not a complaint, but it’s an adjustment for those familiar with the original game.

Arkanoid vs. Space Invaders is fast—perhaps a little too fast. After about twenty levels or so, the invaders are relentless. They fire different projectiles at different rates and at different angles. Throw in those blocks for protection—and a time limit—and things get real spicy real fast. Bosses are frequently surprising (some transform!) and require a deft hand. 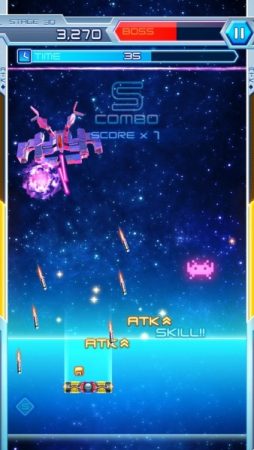 There doesn’t seem to be a penalty for not reflecting shots, but the fewer you reflect, the fewer chances you have of hitting anything. This creates an interesting dynamic because reflecting all the shots statistically gives you the best chance of hitting something, but it might also be a better strategy to slow down and take a more measured approach. The angle of reflection is determined by the area in which the shot hits the Vaus, so if you’re trying to hit a specific target surrounded by a ton of unbreakable blocks, you either need to aim carefully or just get lucky.

AVSI feels the most like Arkanoid after your attack meter fills. It slowly fills with each shot you reflect, and after it’s full, a bow and arrow appear on screen. The arrow transforms into a ball, which you then reflect around the screen for a set amount of time. Much like the original, a well-placed shot can easily wipe out rows of blocks. For this game, it can be a make it or break it moment, so aim carefully. Later levels even introduce bombs, switches (which affect the indestructible blocks) and speed zones (which influence shot trajectory). 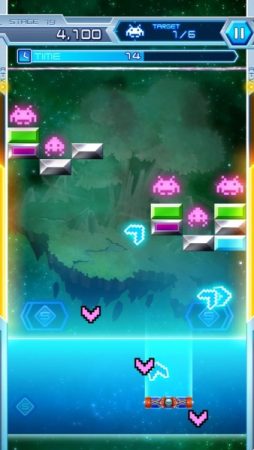 In addition to the time limit, each level (there are 150 in total) has a different mission. You sometimes have to defeat a certain number of invaders, or all of them, or destroy a certain number of blocks. Fortunately, there are a ton of items and abilities at your disposal. Characters from many of Taito’s legendary games (for example, Bob from Bubble Bobble, Lufia from the Lufia series, and Proco and the Iron Fossil from the Darius series) are included and each has a special ability. Using these abilities is often the key to beating the more challenging levels, and some characters are definitely better equipped for some levels than others.

Despite its colorful, arcade-style and techno soundtrack, I have one complaint about AVSI: it can only be played in handheld mode and only with touch controls. It makes sense, considering the game is originally a mobile game. I wish the developers had taken the time to incorporate a more traditional control scheme so that the game could be played in docked mode. If you’re playing on an original Switch, I recommend taking off the Joy-Cons and using a Switch-friendly stylus. This complaint aside, however, Arkanoid vs. Space Invaders is a unique mash-up of both games that shooter fans should enjoy. 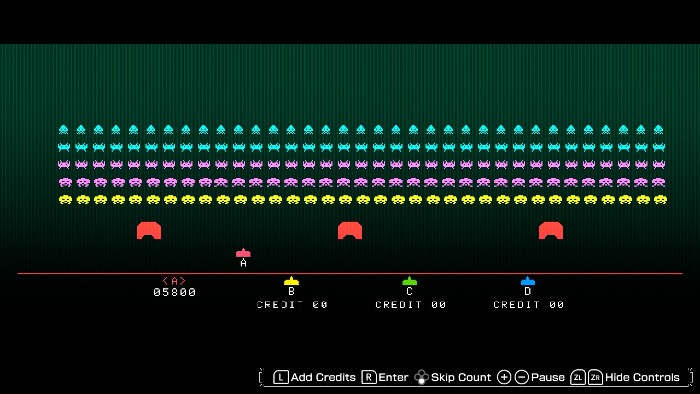 Space Invaders Gigamax 4 SE is a multiplayer arcade entry in the series. Its gameplay, graphics, and sound harken back to the days of old, but the playing field has been horizontally stretched to accommodate up to four players. It looks and plays the part of Space Invaders but with a few gameplay quirks. 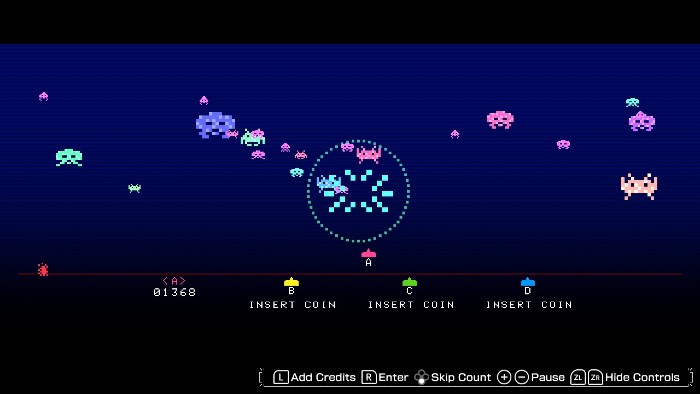 The UFO’s attack patterns are fast and furious. It feels like something taken out of Space Invaders Extreme. Unfortunately, your ship controls much like the original. It’s slow and plodding and fires just as slowly. Dodging these shots (and sometimes the UFO itself) is not easy. Successfully vanquishing the UFO before time’s up is equally difficult. 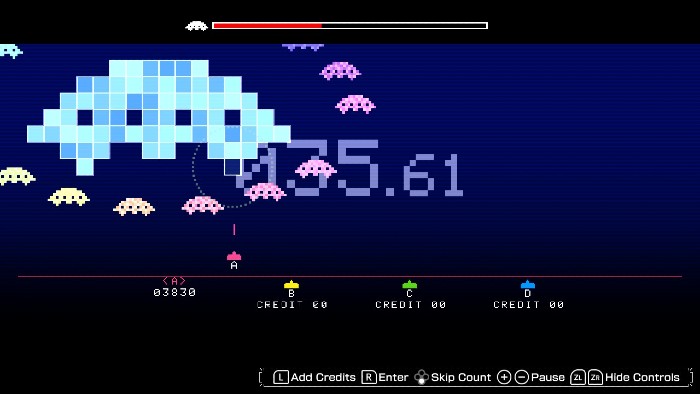 SIG4SE is obviously designed to be played with multiple people. The more people you have, the better it is. It’s almost a requirement due to the playing field’s size alone. Linking your ships side by side also gives you a power shot for taking on the UFO. As a strictly local affair, however, your enjoyment from this game is directly proportional to how many players you have. I only had my husband at the time, and the two of us struggled to make sufficient progress before frustration set in. I can see it being more enjoyable with four players, but at the end of the day, it’s really just, for better or worse, Space Invaders with four people.

In the Space Invaders Forever collection, Space Invaders Extreme is obviously the star of the show. If you haven’t played it yet, you owe it to yourself to check it out. Arkanoid vs. Space Invaders is a fun inclusion, but its handheld-mode only gameplay isn’t entirely ideal. And while Space Invaders Gigamax 4 SE is an interesting idea on paper, its player requirement and simplistic gameplay make it more appropriate as an occasional party game. You’re unlikely to play this collection forever, but there’s a fair amount of high-quality shooting fun to be had while it lasts. 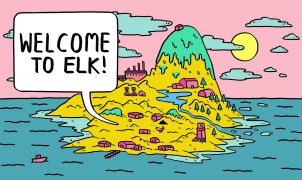 Damn, dude. I’ve had the pleasure of playing some remarkable games from Nordic countries that cherish their respective cultures this year, such as Norway’s Embracelet and Finland’s I hope…