A Short, Sweet Ballad To Games Of Yore 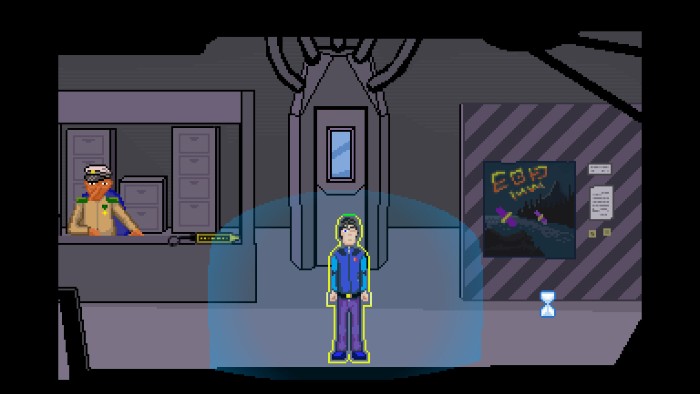 If you’re of a certain generation (i.e., an “Oregon Trail” millennial like me), there’s a decent chance you grew up playing Sierra point-and-click adventure games. Captain Disaster in: Death Has A Million Stomping Boots is a quirky little ode to those old Sierra games, particularly the Space Quest series. Filled to the brim with science-fiction references and puns galore, Captain Disaster is bursting at the seams with nostalgia and humor. 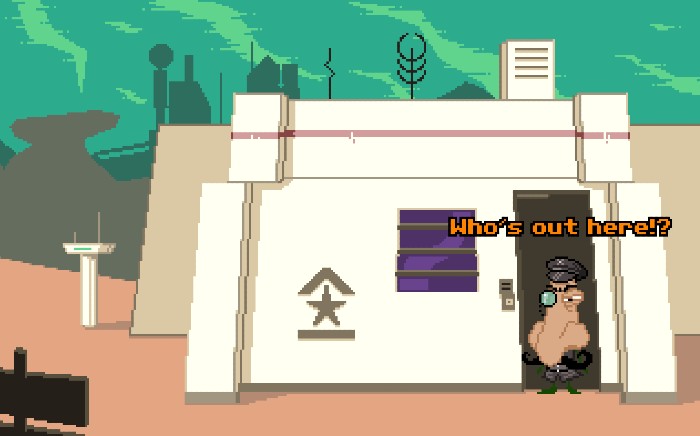 The opening sets the tone for the entire game. There’s a (clearly evil) general hatching his plot to take control of the galaxy. Oh, did I mention the general is basically a giant sentient nose? Cause, yeah, he’s totally a giant sentient nose, from the planet Proboscis Major (which is definitely worth a geeky chuckle). What’s his evil plan? Well, it’s actually one of the most delightfully bizarre parts of the game, so I won’t ruin it here. Suffice it to say, it will make the game’s full title make sense.

What Do You Call A Bachelor Pad In Space? 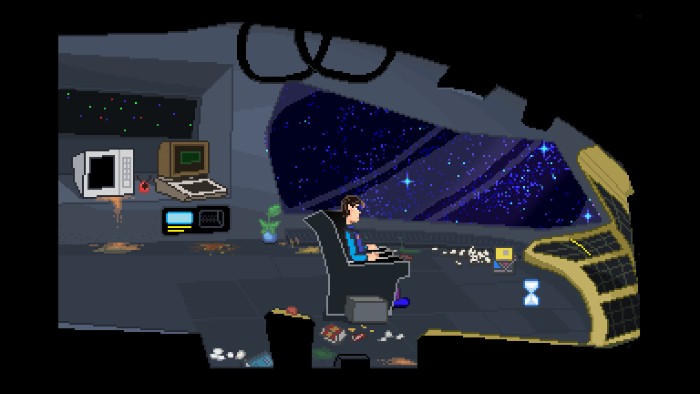 The game is separated into three acts. The first act opens with our “hero” (for lack of a better word) standing on the deck of his ship. I use the term “hero” pretty loosely here because our dear, eponymous Captain Disaster is… perhaps not the most inspiring spacefarer. The deck of Captain Disaster’s ship is, well, a disaster: crumpled up bits of paper (literally, if you hover the mouse over it, he’ll tell you they’re crumpled up bits of paper), empty boxes, old snacks, a pile of books, and questionable smears of food abound. He can be a little forgiven, considering he’s unemployed, in need of money, and his ship’s computer is full of snark.

Poor Captain Disaster has clearly hit on some rough times, so he decided to finally buckle down and get himself a job. A nice, simple delivery job. All you have to do is beam down to the planet Acturus-1, find your customer, and pick up the package. Once the package is in your possession, simply take it to Proboscis Major, and drop it off. Sounds easy enough, right? Well, like any good comedy, bumbling hilarity inevitably ensues.

So Many References, So Few Pixels 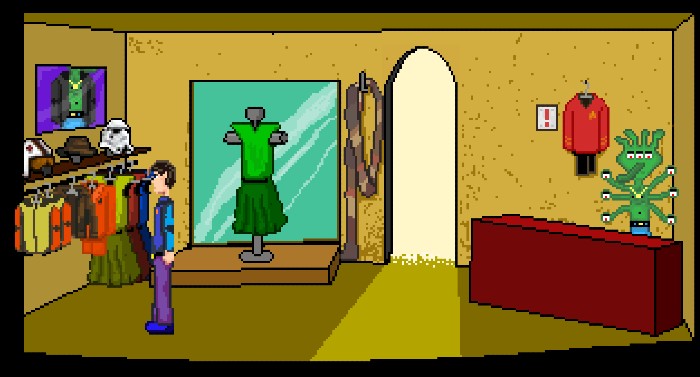 Since the game is fairly short (clocking in at about 2.5 hours or so), I won’t give away much more of the story than that. I can, however, say that the story is charming, in a ridiculously quirky way, and is overflowing with references. Captain Disaster pulls references and puns from just about every science-fiction world you can think of – Star Wars, Space Quest, Hitchhiker’s Guide to the Galaxy, Star Trek, and more. Each reference and pun is a delightful little gem, and it’s worked into the game’s dialogue really well.

Controls are very simple: left click with the mouse will move you to the indicated spot or interact with an item, while right-click will look. Nice and easy, and definitely harkens back to classic Sierra games and the like. Simple controls work well for the game’s main draw, which is solving puzzles. You’ll explore different areas such as your ship, and the planets Acturus-1 and Proboscis Major. In the classic formula for point-and-clicks, as you explore, you’ll find items you need to progress through the story. The puzzles in the game were pleasantly challenging, and didn’t always have an obvious answer, which I found to be pretty refreshing. That’s not to say that some of the puzzles didn’t have bizarre answers or that I didn’t get frustrated. There were a couple of times I got a bit frustrated because I wasn’t able to figure out what I was supposed to do, but after finally figuring it out, more often than not, I felt silly for disregarding the obvious clues that had been given to me. 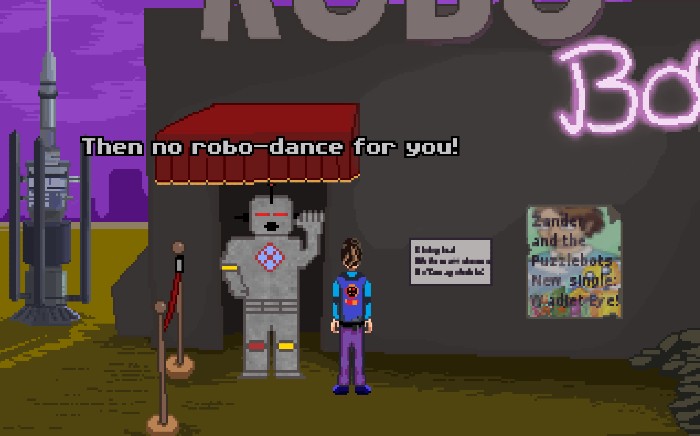 Speaking of dialogue, Captain Disaster is fully voiced. I’ll admit that for the first 10 minutes or so, I didn’t love the voice acting. But weirdly enough, it actually grew on me the more I played. By the time I was halfway through the game, I found it surprisingly endearing. Somehow, the voices just fit with the overall theme and style of the game. The sole exception is the ship’s computer. I found his voice to be a little forced, but still lightyears ahead of the likes of Chaos Wars.

The game’s art style is definitely a huge nod to the old point-and-click adventure games of my youth. I got a lot of Space Quest vibes, and in the best possible away. It’s wonderfully pixelated, with vaguely-defined characters that makes me really want to bust out Space Quest, King’s Quest, or Quest for Glory. That’s not to say it’s perfect. At times, the backgrounds were just a little too bland. In particular, the skies of Proboscis Major were just a bit on the boring side. Overall, though, I found the graphics and style to be very charming. Except for the talking pizza. While he made me laugh, he also made me inexplicably uncomfortable. Not a complaint, mind you, just a personal observation.

While Captain Disaster has an original music score, I can’t really say that there was anything especially memorable or exceptional about it. The best music played during the credits, and otherwise mostly felt like background noise, and was, sadly, forgettable.

I Am Your Friend, Bonder 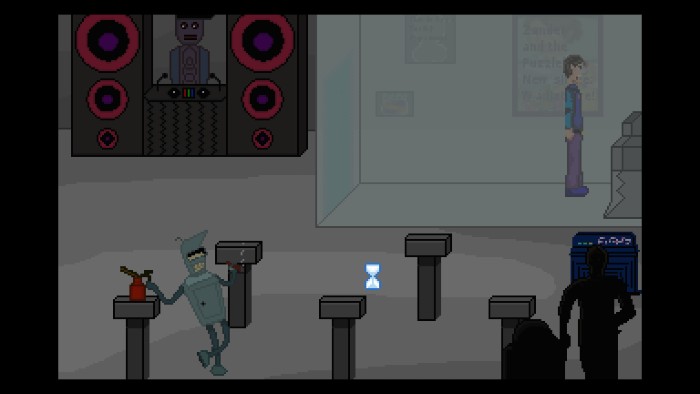 Captain Disaster does a lot of things right. The difficulty of the puzzles is, on the whole, nicely balanced. The voice acting is charming and really gives you a feel for the titular character. The art style invokes a lot of nostalgia in the best of ways. But, there are some flaws. For most of the game, you have a handy-dandy multi-tool known as a Quadcorder. The Quadcorder is a combination sound recorder, bottle opener, magnet, and Geiger counter. Nifty, right? Sadly, you only use it a couple of times. I really felt it could have been utilized just a bit more. I also wish the game was a bit longer. To be fair, though, that could be because I really enjoyed it, and just wanted more.

Overall, if you’re a fan of old point-and-click adventure games, I definitely recommend Captain Disaster in: Death Has A Million Stomping Boots. The nostalgia factor is huge, the story is a delightful bit of comedic relief from the real world, and the puzzles will give your brain a decent workout.

Captain Disaster in: Death Has A Million Stomping Boots is available on Steam. 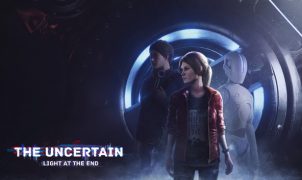