The end of an era

I speak for many millennials when I say that Flash was a pretty big part of our youth. The days before YouTube were spent browsing Newgrounds, Homestarrunner, Neopets, or other random sites for the latest funny Flash games or videos powered by the program we were all advised to learn as quickly as possible. Badgers and mushrooms, amazing horses, Star Wars raps, Matrices re-re-reloaded, primers on FF7 battles, and so, so, so much more dominated our school computer lab screens, sharing video and game links to each other via Myspace, AIM, MSN Messenger, and mIRC. It’s taken me 20 minutes just to write the above as I sift through these wonderful old memories, transported back to a simpler time not just in my life but in technological terms. Truly, Flash was magical.

There are those who have recognized the importance — nay, the magic — of the medium, and have spent countless hours archiving these testaments to human creativity. Newgrounds has released a downloadable program that allows Flash content to be played in its viewer, and BlueMaxima’s Flashpoint has painstakingly preserved over 70,000 games made by thousands of creators. Jonas Richner, the curator behind flashgamehistory.com, is one such hero, devoting his time to laying out a visual history of the countless creations made over the 24 years of Flash games.

On December 30, 2020, Richner published 20 short interviews with key figures in the Flash sphere, including the creator of Flash Jonathan Gay, the founder of Newgrounds Tom Fulp, the co-creator of Radical Fishing and indie game legend Rami Ismail, and others. Included in the interviews are links to the creators sites, social media, and games to play for old time’s sake. Richner posted the shortened versions of the interviews on his Twitter in a bittersweet, nostalgic thread.

HeyPoorPlayer.com encourages readers to check out flashgamehistory.com for the full interviews; in the meantime, check out a handful Richner’s shortened versions of the interviews via his tweets: 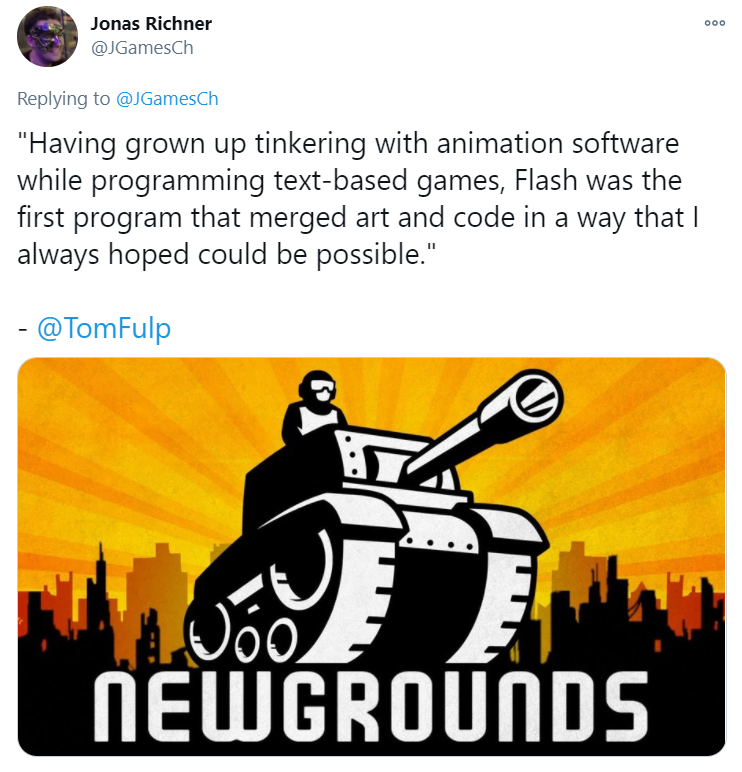 “Having grown up tinkering with animation software while programming text-based games, Flash was the first program that merged art and code in a way that I always hoped could be possible.” — Tom Fulp, founder of Newgrounds.com 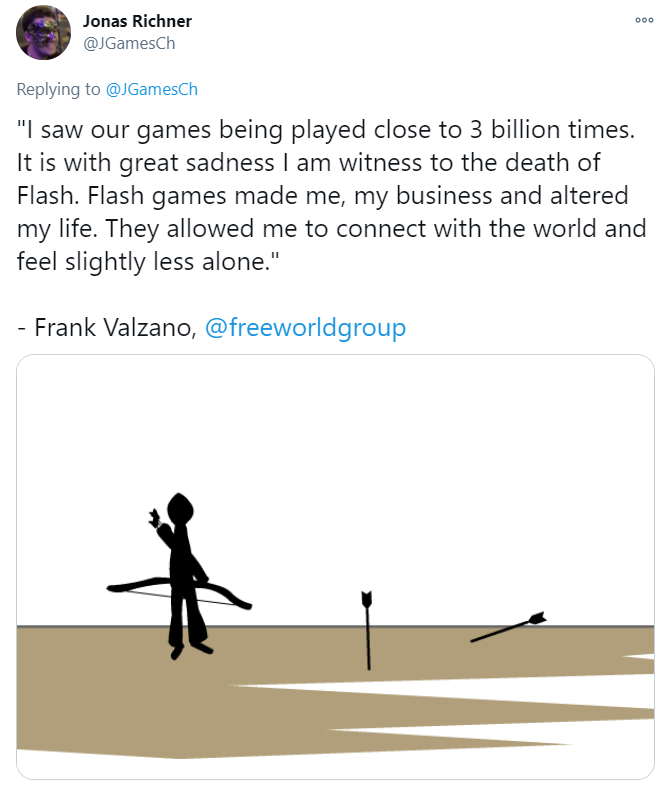 “I saw our games being played close to 3 billion times. It is with great sadness I am witness to the death of Flash. Flash games made me, my business and altered my life. They allowed me to connect with the world and feel slightly less alone.” — Frank Valzano, founder of FreeWorldGroup.com 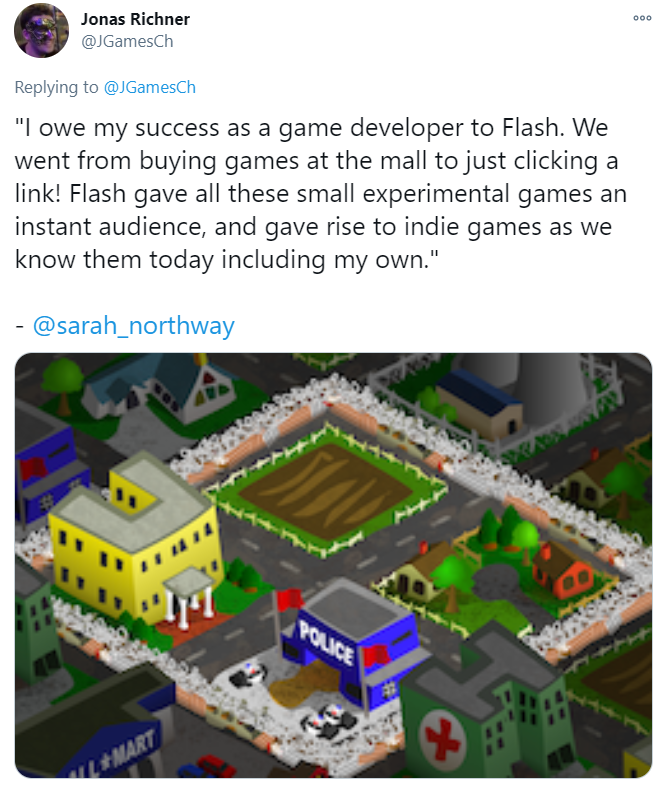 “I owe my success as a game developer to Flash. We went from buying games at the mall to just clicking a link! Flash gave all these small experimental games an instant audience, and gave rise to indie games as we know them today including my own.” — Sarah Northway, Northway Games 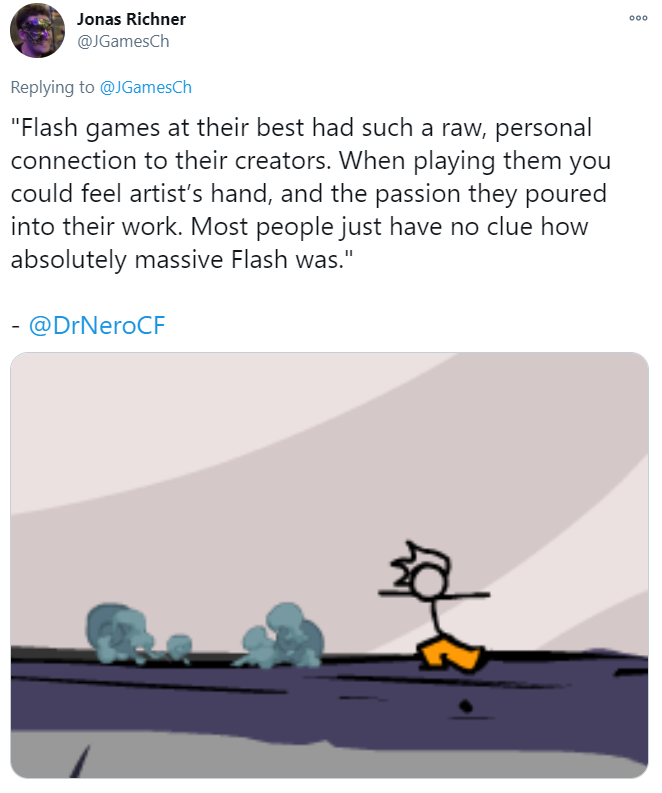 “Flash games at their best had such a raw, personal connection to their creators. When playing them you could feel artist’s hand, and the passion they poured into their work. Most people just have no clue how absolutely massive Flash was.” — Brad Borne, Borne Games 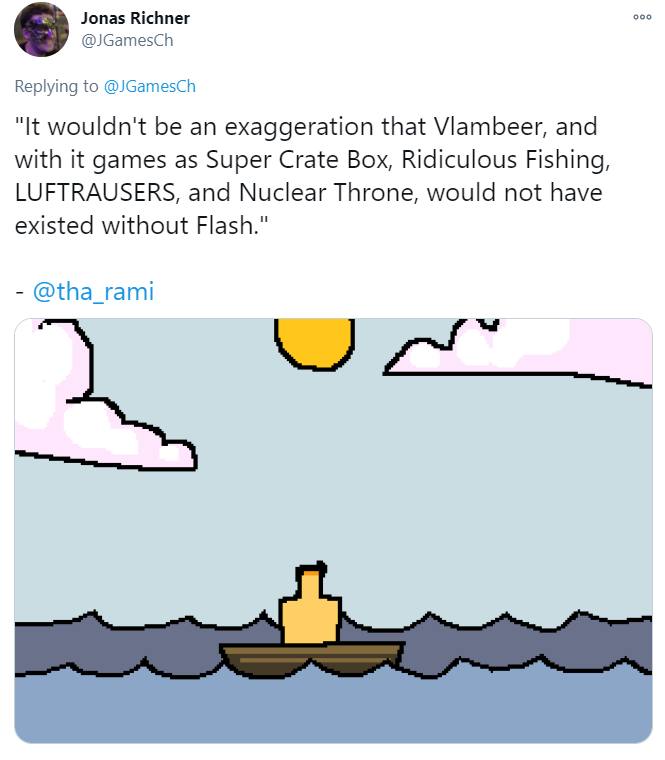 “It wouldn’t be an exaggeration that Vlambeer, and with it games as Super Crate Box, Ridiculous Fishing, LUFTRAUSERS, and Nuclear Throne, would not have existed without Flash.” — Rami Ismail, co-founder of Vlambeer and creator of presskit()

To check out the rest of the interviews, please visit flashgamehistory.com. 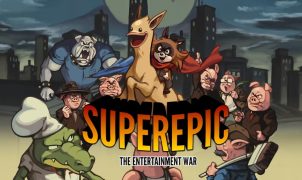