After I was assigned the onanistic opus Wanking Simulator to review, I often wondered if I would ever be assigned to review something quite so profoundly prestigious ever again. Recently though, I was given something with even more gravitas to appraise: Chair Fucking Simulator.

Chair Fucking Simulator casts the player as some sort of wretched gray blob thing with withered limbs and perennially filthy expression. It lives in some sort of misty post-apocalyptic car park, and from the Windows XP-esque title screen, we can only discern it hasn’t upgraded its computer since the noughties.

One would surmise the blob thing has become so maddened by its life that it seeks out casual carnal companionship from inanimate objects online. Then again, perhaps the blob thing has been exiled to this barren wasteland because of its forbidden lust for furniture. We don’t know, because Chair Fucking Simulator has no plot or story, simply thrusting, literally and metaphorically, straight into the action. 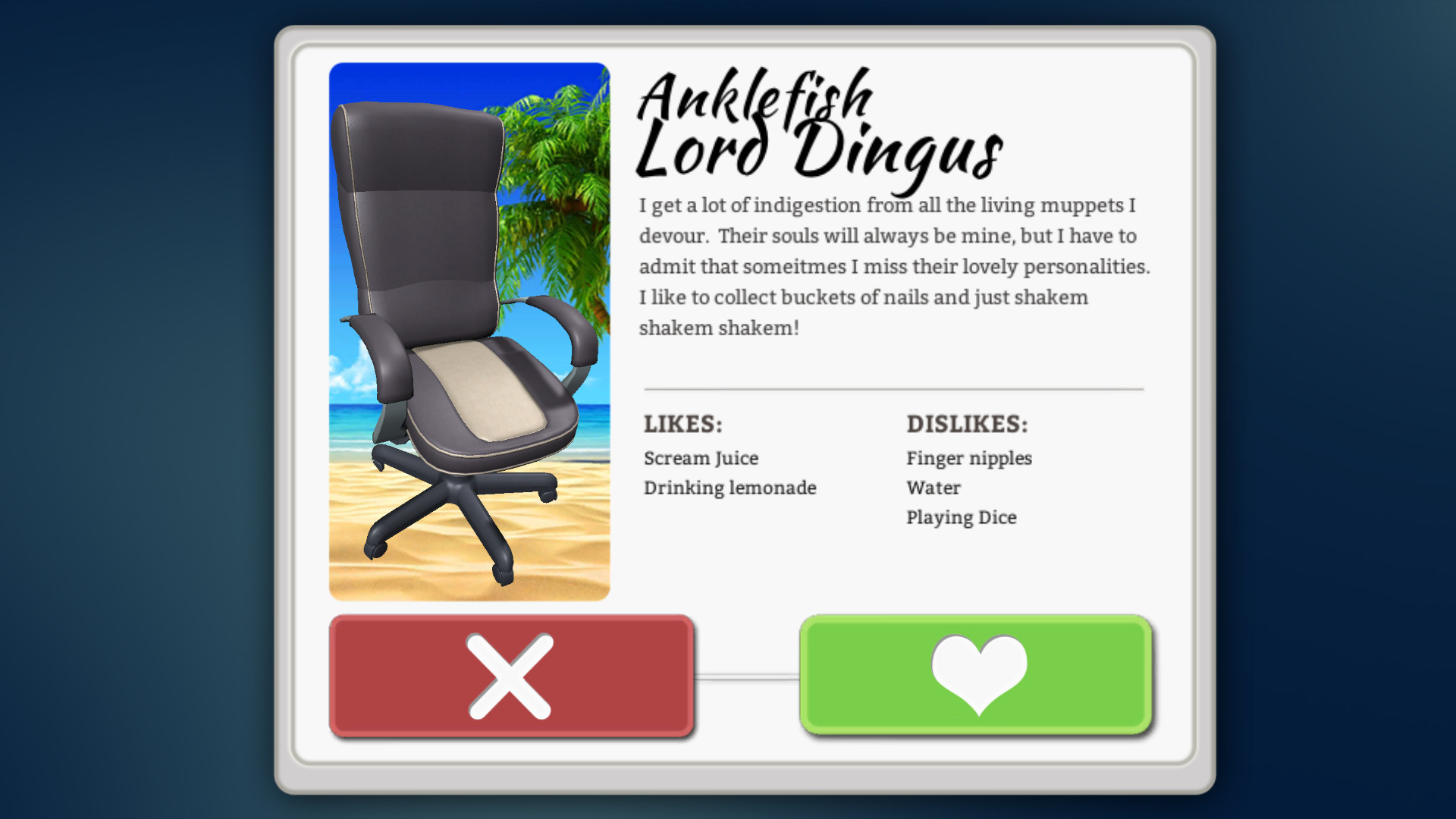 Once I clicked the “I want to fuck a chair” button, and inwardly shuddered at what I’d just consented to, I was taken to a Tinder-esque screen, offering a veritable roster of randy recliners to swipe left or right on.

Chair fucking purists may be disappointed as the choice of partners extends to practically any inanimate object one can sit on (though whether you’d want to is another matter). There’s a truly tantalising variety on display too, from more traditional chairs, all the way to neon toilet seats and garbage cans.

Once you’ve selected a paramour for the evening, you’re whisked right into the chair fucking itself. There’s not even the pretext of Netflix and chill or any attempt at foreplay here, just straight to frenzied furniture fornication. Clicking on a chair will have the blob thing thrust enthusiastically against the object of its affections and produce a prompt to tell you if the tempo of your pounding is the right speed. After a few experimental clicks I soon got into a steady rhythm, increasing my score as rapidly as my resentment towards our Editor in Chief for making me review this.

Occasionally power-ups appear on screen, letting you go into rapid-fire fucking mode, letting you just click wildly for a bonus score. To get an even higher rating, you’re given an opportunity to perform a finishing move – one final victorious thrust into your partner – where perfect timing is required to stop a sliding indicator right in the green sweet spot of a bar at the bottom of the screen. When timed correctly, this will produce a terrifyingly distinctive animation for each type of chair – one wooden chair literally exploded into its constituent parts when I brought it to the peak of its pleasure. 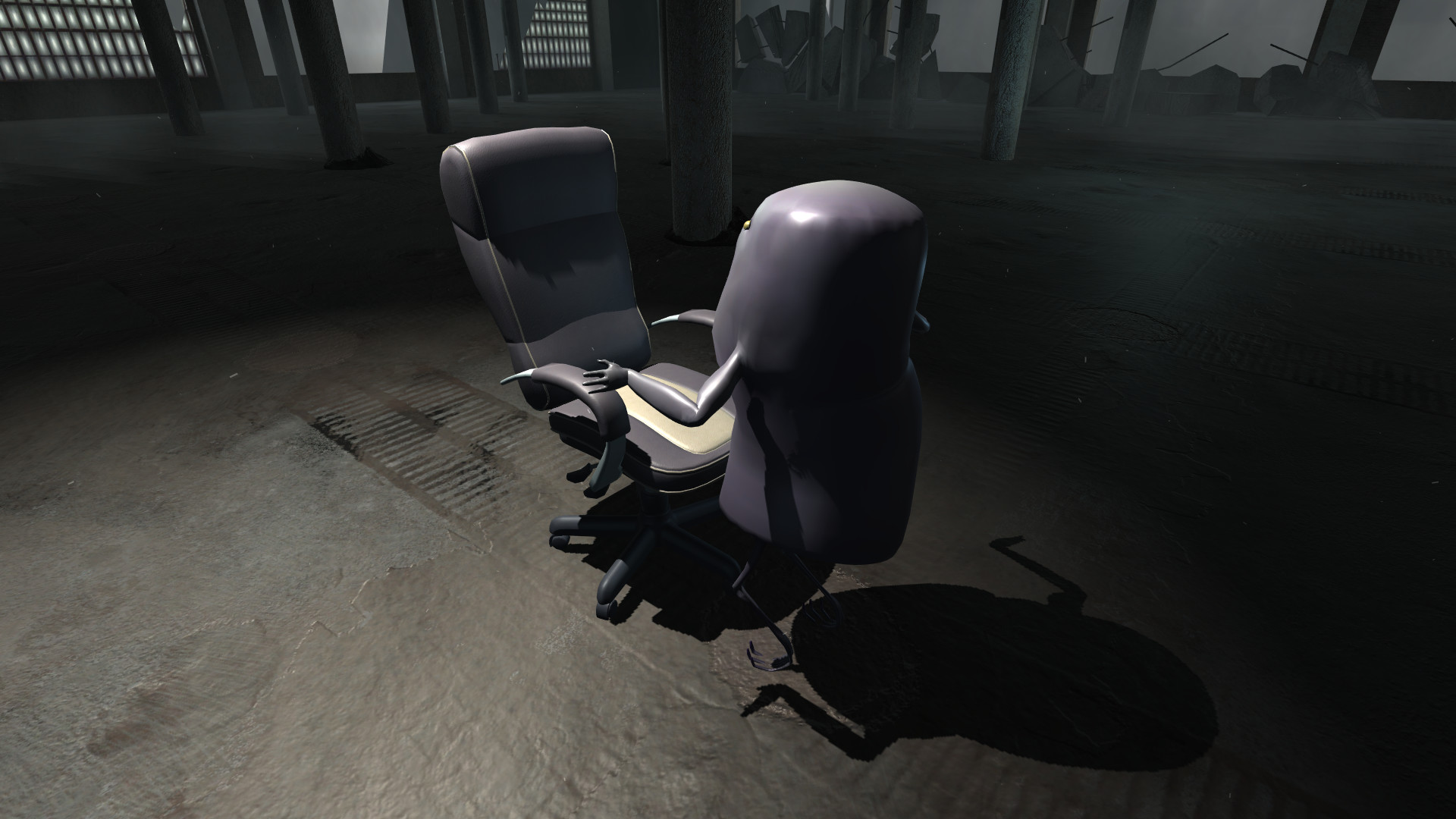 I did actually raise a few genuine smirks when perusing profiles with some of the outlandishly absurd writing. I was also surprised at how much effort seemed to be put into animating the inanimate objects as they react to the grey blob’s manic thrusting. The toilets flip open and spray their glistening waters around whilst the legs of the flimsier chairs literally curl and twist from the pleasure. I was just as impressed with the developer for their devotion to evoking their subject matter as I was deeply concerned about their mental health.

Periodically, you’ll be called by your recurring friends with benefits, telling you that they want to end the tryst. At first, I found myself trying to salvage these booty call arrangements, but found the only way to do so was to simply bang my way back into my distant lover’s good books once again. Once I realised that all the dialogue is randomly assigned and there’s no real reward in ravishing the same old garbage can over and over, I quickly dumped my harem and simply went for a series of one-night stands, wanting as much variety as possible to buoy my rapidly waning interest. However, after a short while, this just felt even more meaningless and hollow. Chair Fucking Simulator presents sex as a raw, animal act, devoid of any meaning, and presents those who like to sleep around as selfish and incapable of making any kind of genuine emotional connection. 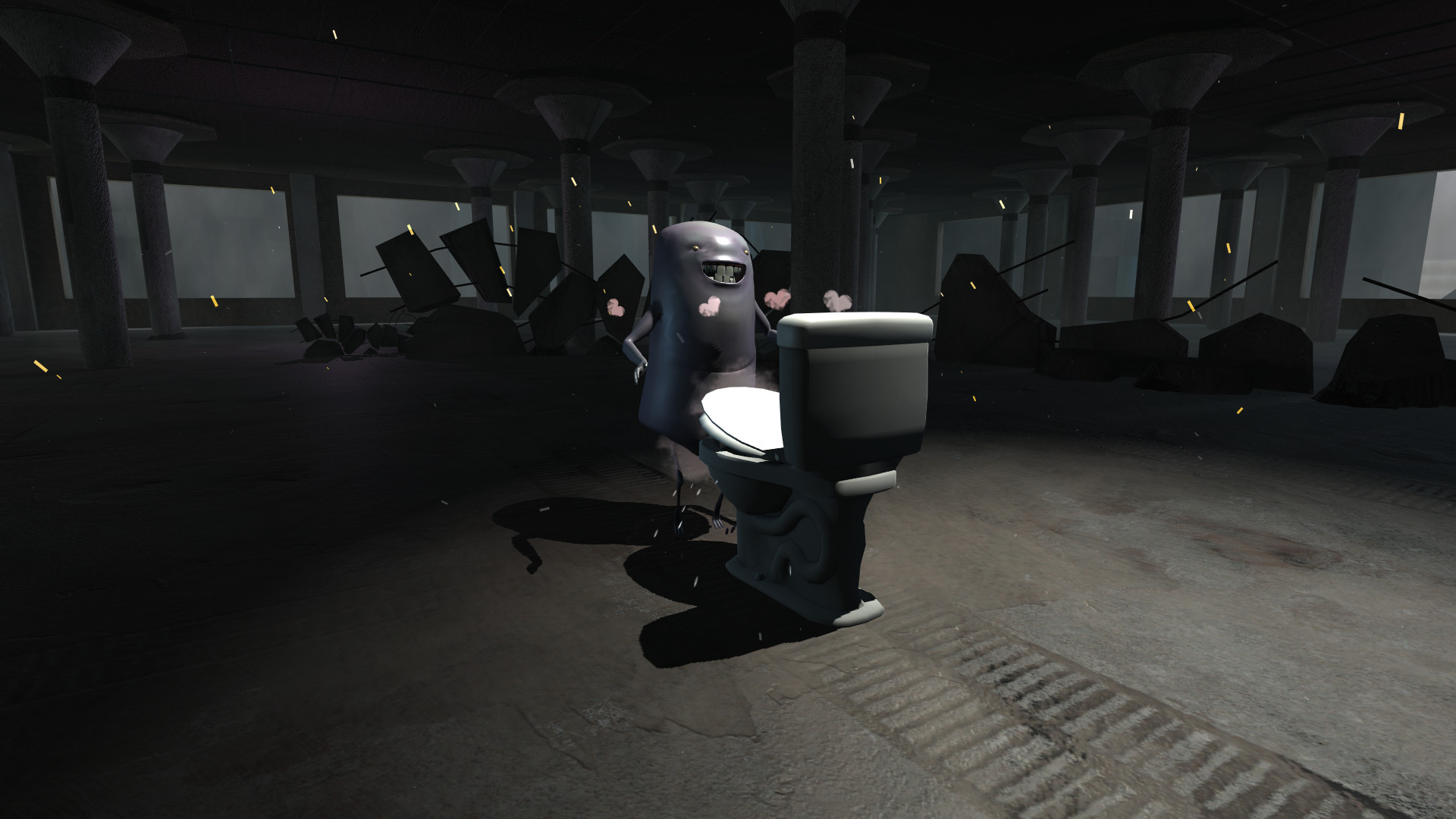 I enjoy my life as a debonair man-about-town bachelor, but Chair Fucking Simulator rendered my promiscuous lifestyle in such a grim light it made me want to immediately get married, have three kids and a mortgage. Either that or just sit in a corner and cry.

If you want a boilerplate review summation, I’d say Chair Fucking Simulator is a deeply unpleasant, bare-bones rhythm game that quickly loses its scant novelty appeal in less than an hour. To judge the game on a more artistic level, you’d have to ask what message the developer wanted to impart to the player.

If the developer wanted to show the loneliness and repetitive futility of an amorous singleton’s life in the Tinder age then they’ve done a superb job of conveying this through the warped nightmare they’ve created. I had some laughs, but I was looking for a deeper connection, and this is one regretful one night stand I’ll soon want to forget. You won’t just be doing the walk of shame after playing Chair Fucking Simulator, you’ll be full-on sprinting away.

Full Disclosure: This review is based on a copy of Chair Fucking Simulator given to Hey Poor Player by the publisher 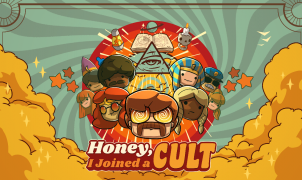 I Made a Santa-Based Religion in Honey, I Joined a Cult