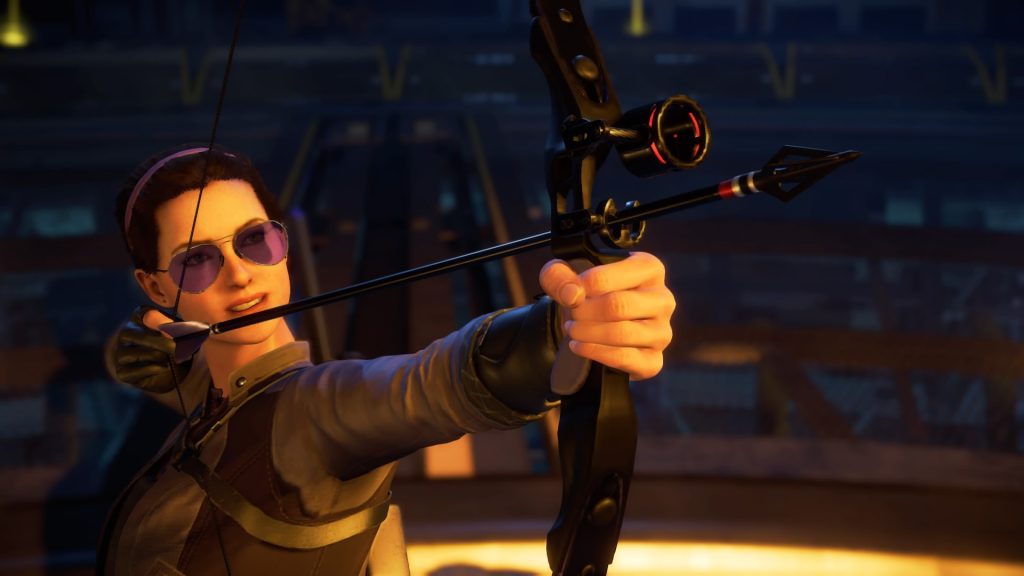 The Marvel’s Avengers Kate Bishop DLC is a great step in the right direction, delivering some high-quality content that expands the game’s solid campaign storyline. Intentionally, this DLC coincides with the hype building around Hailee Steinfeld and the upcoming Hawkeye Disney+ series. So if you’re someone like me who had no idea who Kate Bishop even was, then you’re in for a treat. This DLC serves as a fantastic introduction (similar to how Marvel’s Avengers did in introducing Kamala Khan). Much like her mentor, Kate Bishop is a fun, wise-cracking archer, a young and skillfully dexterous rogue. More than anything else, Kate’s storyline as the forgotten Avenger is the whole selling point of this DLC, as is her quest to find out what happened to her old mentor, Hawkeye.

Developed by Crystal Dynamics and Eidos-Montreal and published by Square Enix, the Marvel’s Avengers Kate Bishop released on December 8th for PS4, Xbox One, Stadia and PC after months of waiting. Having already reviewed Marvel’s Avengers back in September, I will say a lot has changed surrounding the narrative about this game. Despite both its incredibly fun gameplay mechanics and compelling story campaign, a majority of Marvel’s Avengers’ user base has left the game. Many cited issues with the many glitches, but also, the repetitiveness of its Avenger’s Initiative multiplayer. Still, I firmly believe this game has a lot of promise and I genuinely hope that they get a chance to release all of their planned DLC. Especially in regards to Black Panther, She-Hulk, Captain Marvel, and Doctor Strange, as it’s becoming painfully obvious that this game was meant to help market some of the new MCU characters to a wider audience. Which will only happen if more people start playing. 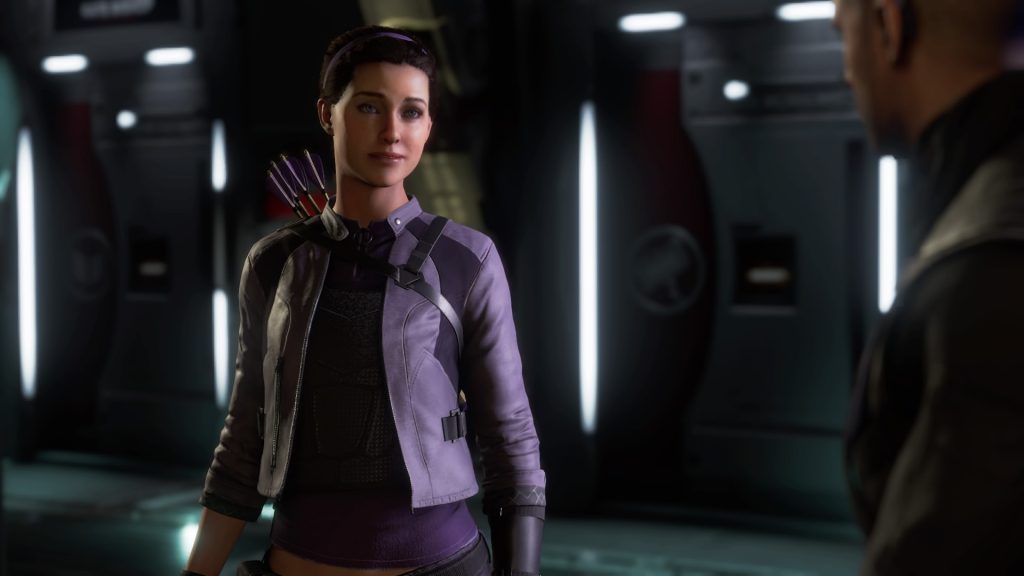 The quality of this DLC is surprisingly refined. The cut scenes and voice acting is superb (and probably very expensive) and its introduction to Kate Bishop is nothing shy of compelling. I knew nothing about Kate when I started this game but found myself genuinely excited about her by the storyline’s end. Much of this is because of voice-over actress Ashley Burch, who has in the past done an excellent job with sardonic female characters. She brings a lot of sass and cadence to Kate. In this story, we learn how incredibly skillful Kate is in kicking butt, but also, how her awkward, funny and gung ho approach really carries this story. And though her time in the spotlight is short, Kate makes up for it in her gameplay serving as the group’s Jill-of-all-trades. A character you can’t help but notice in the field, mostly because much like Kamala, she’s funny and also tremendously helpful. Atop of all this, just like Natasha and Tony, she can hack those annoying AIM terminals, and also sports some of the best looking outfits in the game. 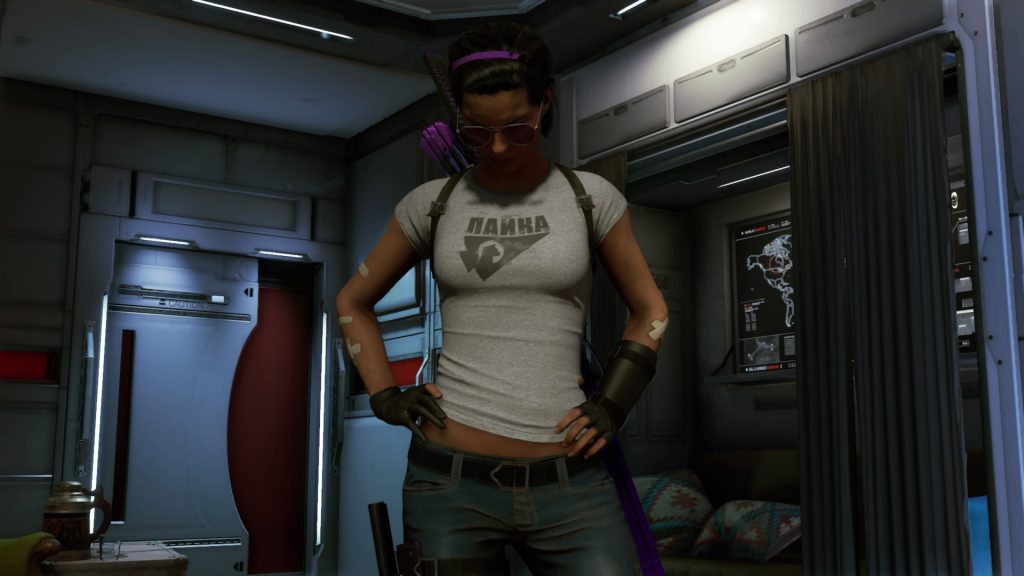 Seriously, I can’t stress enough that Kate is a badass in this one. Besides being the best utility character (which I go over in the gameplay section), Kate is also one of the game’s first sword users. If you’ve played CD Projekt Red’s The Witcher 3, Kate’s teleportation swordsmanship plays an awful lot like Ciri’s in that game, which is incredibly deadly as a character who can teleport around the field and finish off enemies. Atop of this, her long-range archery sports the fastest overcharge stack in the game. And if you’ve ever played Horizon Zero Dawn, Kate’s arrows fire a lot like Alloys, which are more than capable to take down a machine. Uncoincidentally, Alloy in Horizon Zero Dawn is also voiced by Ashley Burch, which is more than likely the reason why they had hired her to play Kate Bishop, as she’s already familiar with playing a down-to-earth badass lady archer.

Kate Bishop immediately comes free with the campaign. However, fully unlocking her character card (for free skins, credits, and resources) costs 1000 in-game credits. Hopefully you’ve saved some credits, as once unlocked, you can actually gain 1300 credits by unlocking all of her in-game challenges, all for a net gain of 300 credits. 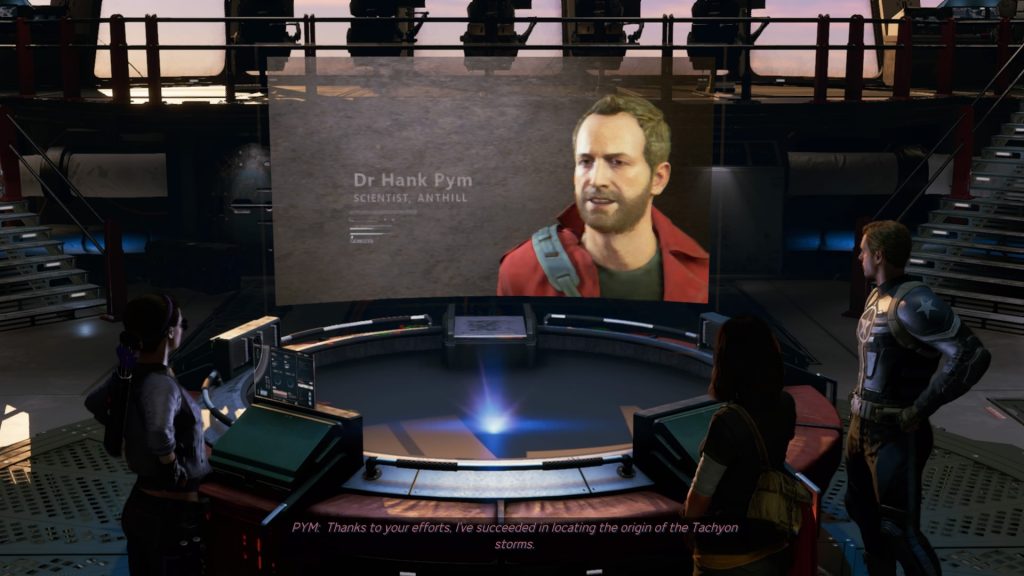 While Taking Aim is a nice new campaign addition with a lot of added cut scenes and voice-over work, it doesn’t fix the overall issues with the game. So if you’re looking for a drastic change in dungeon crawling or boss fights, you’ll be disappointed. There is, however, a focus on platforming for this DLC as Kate can teleport upwards and can travel across the map rather quickly. The campaign itself is also short with about six hours of material as it’s only part one of two Hawkeye-centered storylines focused on Kate and Clint, with Clint expected to be the main focus over Kate in the next Marvel’s Avengers DLC.

In Taking Aim, we get to see Kate go into her own little spy investigation, working for SHIELD and the Avengers while learning more about the quantum rifts happening in the game. All for a time travel plot that’s proving itself to be similar to both Endgame and Days of Future Past. The DLC expands a bit on the Marvel’s Avengers conclusion, addressing the Kree and the possibility of an upcoming alien invasion. Like many kickoff moments in The Avengers comic history, the Avengers will have to unite to stop the oncoming threat. But before that, Taking Aim mostly serves as a platform to learn about Kate Bishop’s history as an almost avenger. Circling back to the movies like much of this game has done in the past, the campaign also delves into some Quantum research and time travel, now featuring Hank Pym. You can also actually replay Kate’s campaign, unlike the main story. Which is a feature many fans have wanted in the game since the beginning. You can also walk around as Kate in the Chimera Hellicarrier to unlock some of her interactive dialogue with her fellow Avengers.

Is It Still Eye Candy? Yes, Like Cotton Candy 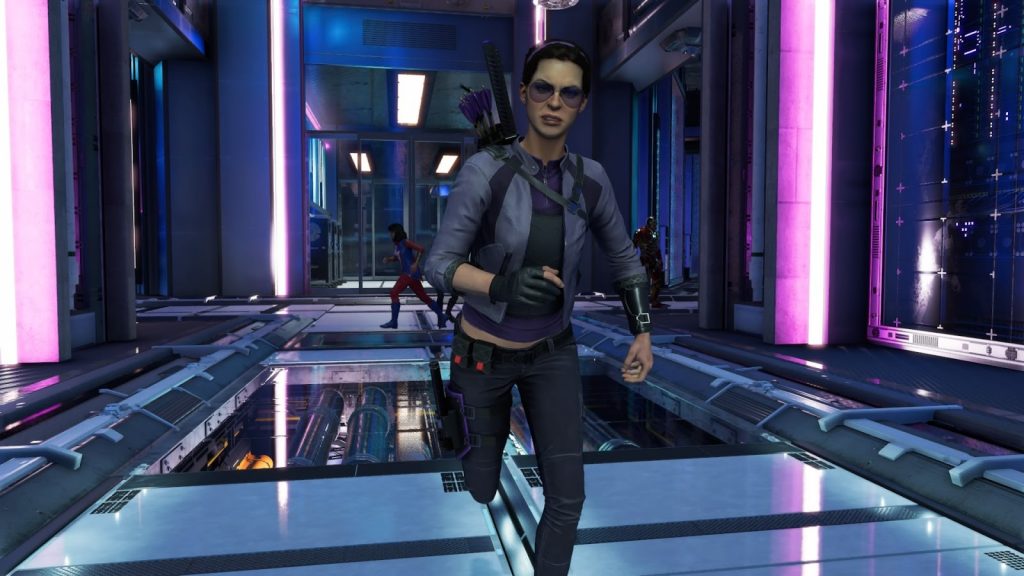 Technically, there isn’t really much to talk about here that’s significantly different, as the graphics are more of the same eye candy great for taking photos. The levels are almost rehashed areas you’ve likely grown familiar with thanks to the Hive quests, though there is a slight redesign in terms of where buildings are placed. The game also adds some vibrant colors like what you see above. It is also set mostly in the arctic tundra. There are some new boss battles in the DLC but it’s mostly variants on the same types of robots. Albeit with (slightly) new attacks. 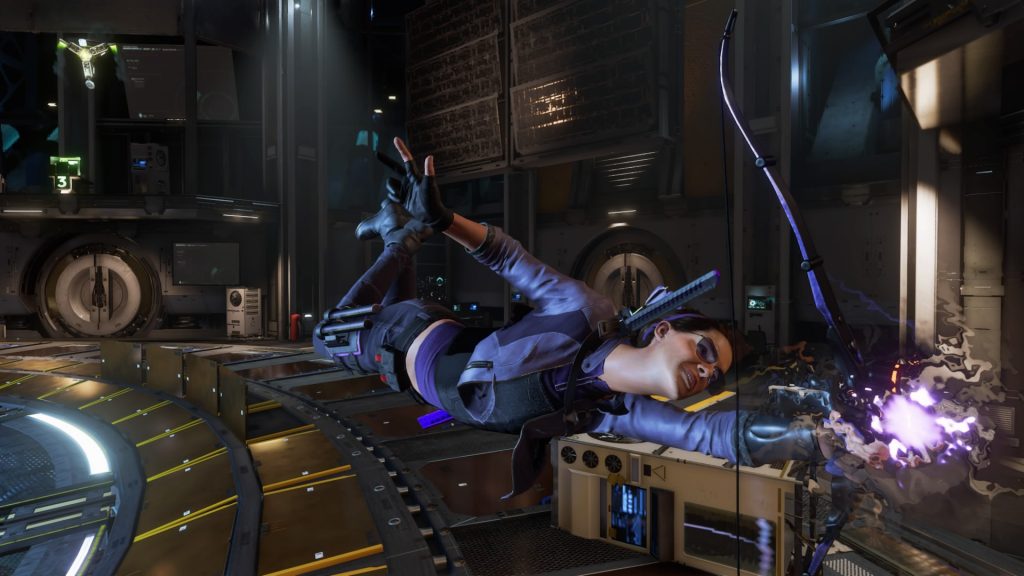 I know many have asked for new enemies outside of Robots but just from a game engineering perspective, it would probably be difficult to implement that sort of new overlay as a DLC. And while I do completely agree killing the same robots gets repetitive, I still think this game is a lot of fun. I’m not detracting from the game’s DLC for its level design or repetitive use of the same types of bosses. Because this game is really more about its characters, getting to know them, and then watching them kick robot butt. Above anything else, it’s just fun to play as these heroes and see the many stellar combat moves they can execute. 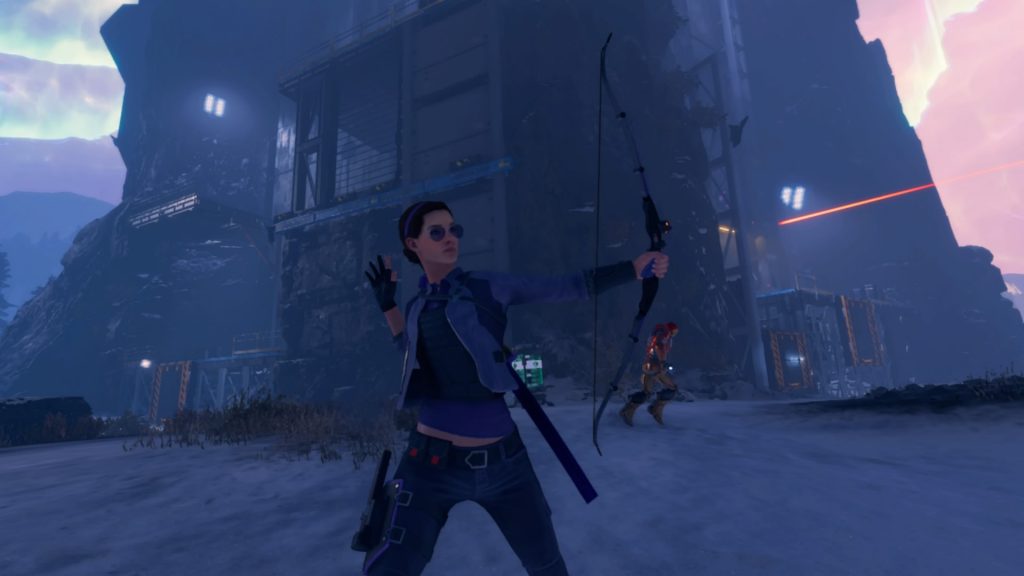 Simply put, Kate Bishop in Marvel’s Avengers is simply amazing. Arguably the most entertaining character to play as, second only to Thor. In terms of gameplay, Kate has the overcharge appeal of Thor with her fast stacking arrows. Combine this with her mixed arrow arsenal and fast melee capability, she’s easily one of the most deadly but also most complicated characters to use in the game. But where Kate shines is that all of her base heroics abilities are utilities. A fantastic new feature for multiplayer as she can teleport and even create portals for allies to use. Atop of this, portals also generates shields for those who walk through it, not unlike the in-game Jarvis barriers your characters can equip (though this buff only lasts a few seconds). Kate can also blink in any direction during combat, including across gaps, and even upwards towards high ground. She can also change combos and directions while in mid-air, making her easily the greatest maneuverable character in the game. Even better than Black Widow.

As a swordswoman, Kate can blink backstab, counter, and swing her sword, hitting multiple enemies. Depending on her build, she can even project energy through enemies when she swings her sword (at least for her ultimate heroic) in a style similar to Captain America’s Brooklyn Brawler. However, you can also customize Kate as an archer and go with a relentless energy arrow build where she strikes enemies hard from afar. This is the great thing about Kate Bishop, as she’s fantastic as both a melee or range specialist.

But let’s also not forget Kate is above all else, an archer, and her Archery skills are themselves incredible in the game. While her explosive AOE arrows are a little slow for my tastes, her demolition charge arrows beautifully combo stacks with any signature or power attacks, while her multi-targeting scattershot and explosive arrows do some serious damage and/or crowd control. Her base arrows also debuff enemies, increasing critical hit chances against an enemy for all allies. So basically, she’s the greatest ranged character outside of Iron Man. Personally, I like her multi-shot arrows as you can customize their upgrades and make them a five-arrow shotgun.

A Worthwhile DLC For A Fading Title

Overall, The Marvel Avengers Kate Bishop DLC was a great step in the right direction. Still, I wonder if the game can turn around at this point as it’s been months since the initial release. Crystal Dynamics did a fantastic job with how much went into this DLC and with Hawkeye’s inevitable conclusion to this archer storyline I’m excited for what will come next and what this game can be (particularly with Wakanda, as it seems like that’s the next zone to be revealed after the Hawkeye storylines). I just worry if it’s too late for this game.

Review copy was purchased by author