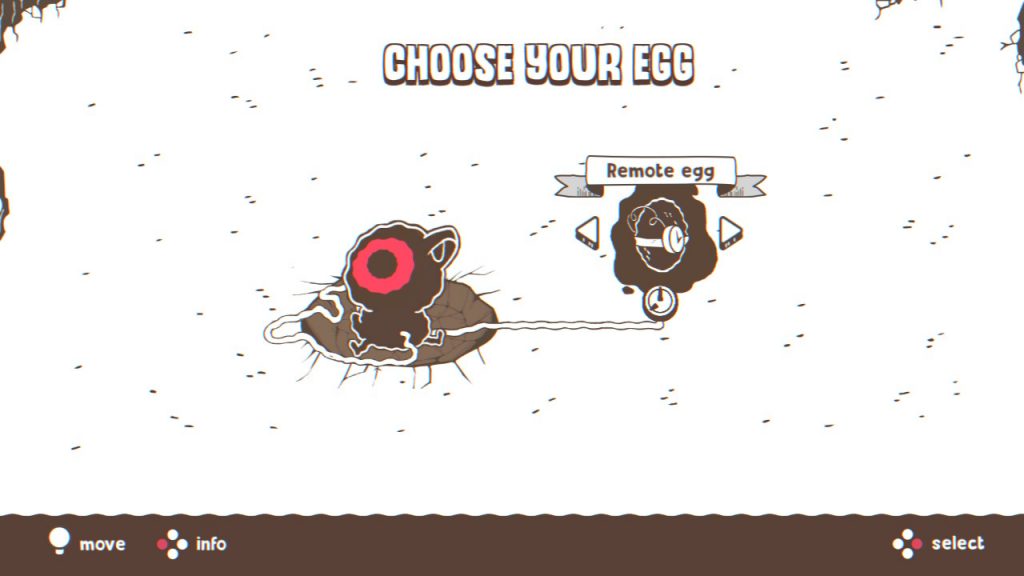 Why, yes! That is an umbilical cord.

Let’s just get something out of the way – there’s something weird about ducks. Sure, at first, they appear goofy, awkward, and harmless. But there’s a sinister aura the trained observer can discern with enough time and patience. Back in my college days, there was a huge fountain that the local ducks liked to congregate around. And I swear to this day, their honking sounded like demented laughter. And that’s just Earth-based ducks. Imagine how crazy ducks from another planet would be? Which brings us to the focus of this review. A game about crazy ducks called Ponpu. 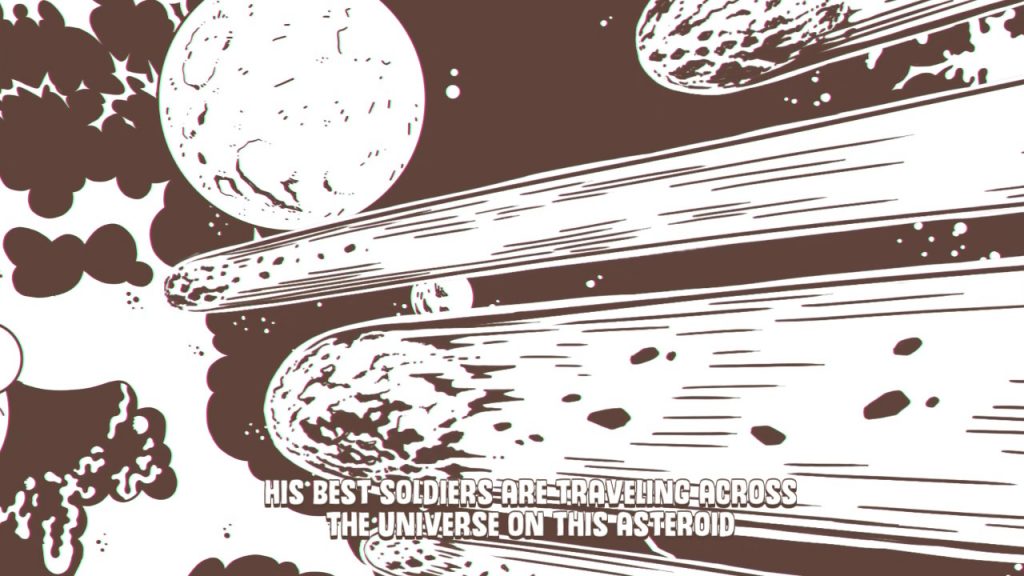 The premise of Ponpu is just as crazed as its space fowl. There’s a Duck-God who has decided to annihilate his creation. He sends vassals crash-landing to planets, encased in asteroids, eager to exert his will. Each of them has the capacity to lay explosive eggs from their mouths in service of that goal. There’s just one catch. A so-called Mystery Duck interferes and manages to co-opt one of the ducks, the titular Ponpu. Thus, he begins the quest of using the Duck-God’s own spawn against him. And no, the game doesn’t get any saner after that point. 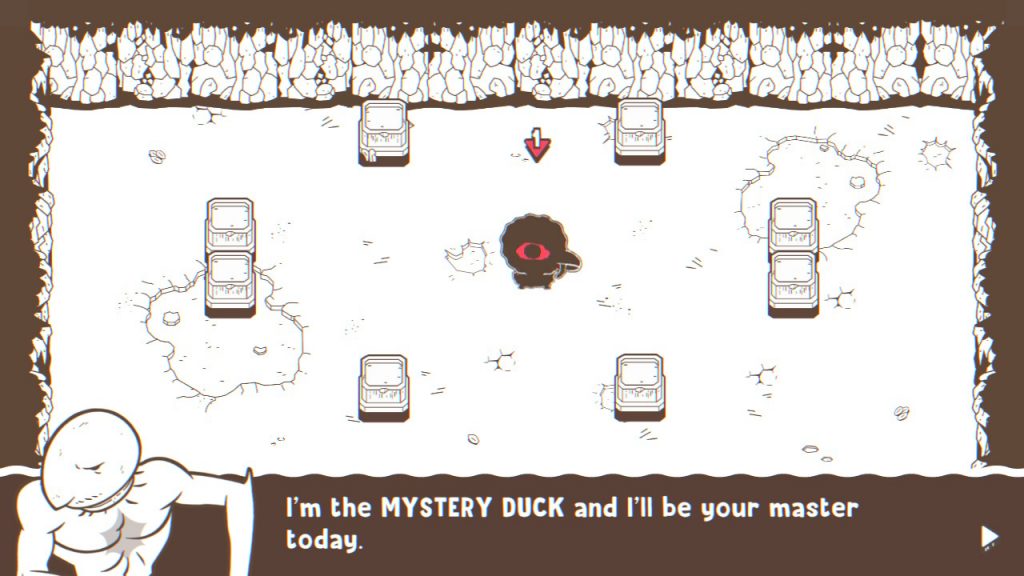 You’re free to select from 4 wildly different looking Ponpu, but they all play exactly the same. Each can lay two types of eggs (special with Y and standard with B), dash with X, and shield themselves with A. One egg is standard and explodes a few seconds after being laid, while the other is a special variant. In Story Mode, you can pick from Remote control eggs and Drill eggs. I think that the idea of the Drill egg is to catch foes by surprise, but in my experience, the Remote eggs are the way to go. You can detonate them at any time after you place them, which makes them incredibly effective. The only benefit to the regular eggs is you can lay multiples of them in sequence, whereas you can only lay one special egg at a time. The dash isn’t all that useful, but it lets you cross pits and escape from enemies chasing you. Finally, the shield is helpful but has very particular timing. You can bring it up after laying an egg to launch your egg forwards or activate it quickly to avoid damage. Just don’t keep it active for long since it’ll get shattered and leave you helpless.

Multiplayer Is For the Birds 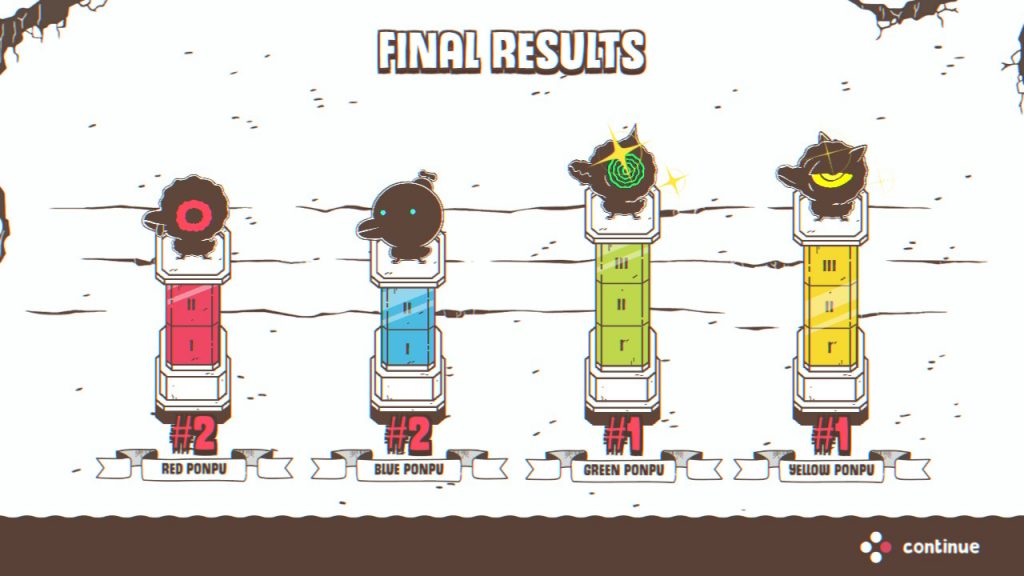 I do think it would have been great to make each style of Ponpu have access to different special eggs. Perhaps the Red one could use Remote eggs, and the Blue could use Freeze eggs. But I digress. The game works fine, and you have access to two other special eggs in the various multiplayer modes. That said, you’ll be spending most of your time in Story Mode, and there you only have the two special variants I mentioned. The multiplayer is fun enough against the AI, with three different modes – Coin Steal, Deathmatch, and Paint Battle. But I feel the real entertainment would come from playing with a group of friends. As I was unable to test that, I spent most of my time in Story Mode. 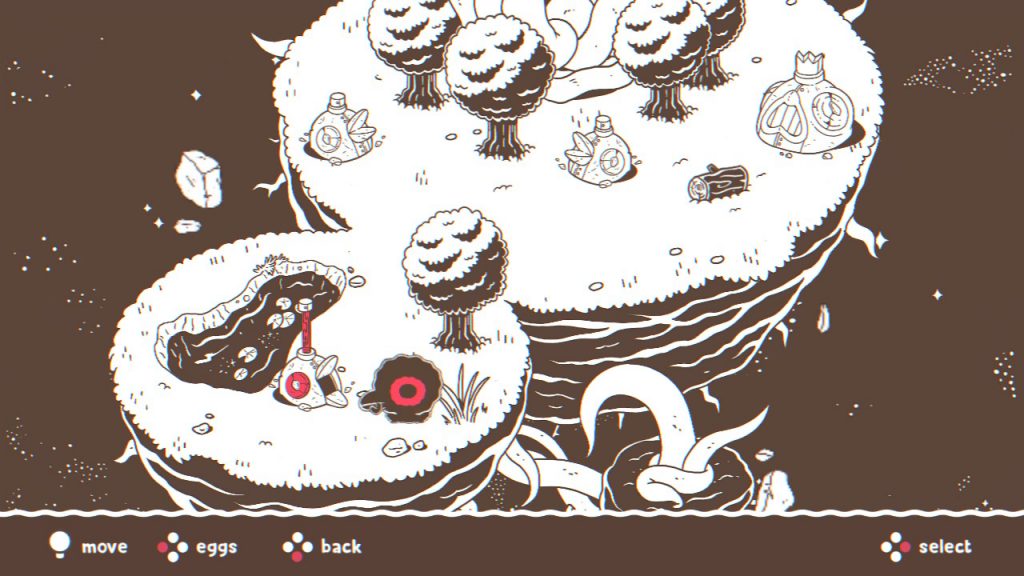 Story Mode is split into 6 worlds, each with 4 stages apiece. Three of those are basic stages, and the last one is a boss fight. The stages are structured, not unlike Zelda dungeons. Each one requires you to find a key to open up the exit door, and avoid rooms full of traps and foes. Some rooms will lock you inside until you’ve dealt with all the foes, and others are just branching paths. Often those side rooms are useless, but on occasion, you’ll find hidden areas with golden feathers. Those are helpful since they increase your base health for the duration of the level or until you die, whichever comes first. You’ll also find plenty of rainbow feathers, but I’m not entirely sure what their purpose is. I asked the PR outfit, and they implied the rainbow feathers have something to do with achievements. But in my Switch playthrough, I never even found any table listing achievements. So I’m still uncertain about them. My preference is always to have collectables serving some clear and distinct purpose, such as unlocking additional content. But that’s a common refrain from me in every game I play. So it’s not a huge deal that Ponpu’s rainbow feathers seemingly do nothing. Lastly, many of the larger levels will feature checkpoints you can activate. These are lifesavers since they keep track of all your progress, even if you die. Just keep in mind they can only be activated with standard eggs. The game, unfortunately, never specified that, which cost me a few lives.

Too Much Dungeon Crawling 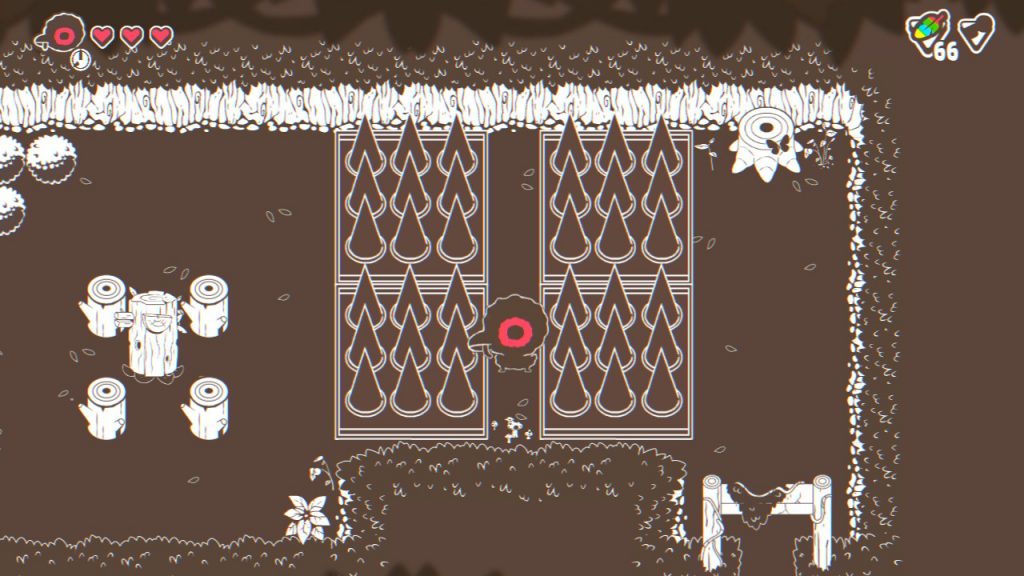 While the basic gameplay of Ponpu is fine, it also gets pretty redundant after a while. I don’t mind exploring large areas, but there should be a payoff for exploring them thoroughly. Instead, here we’re effectively punished for too much exploration. You only have a handful of hearts, and once they’re gone, you start over the stage or continue from the checkpoint. I really felt myself wishing there were various upgrades in the game, just to keep things interesting. It’s no surprise that Ponpu is inspired by Bomberman, yet it lacks all of those many powerups. You can’t ever increase the width of your explosions, alter how you lay eggs, or anything else. The reason I’m bitching a bit about that is because this game can get surprisingly hard, and more than a little unfair. I can’t count how many times I was cornered by a foe the second I entered a room, or shot by a turret I didn’t see. The game really likes enclosed spaces as well, and you’ll have very little room to maneuver. Not that it’s all bad, mind you. The mechanics work fine most of the time. It’s just easier to find fault when the game stays one note the entire experience. 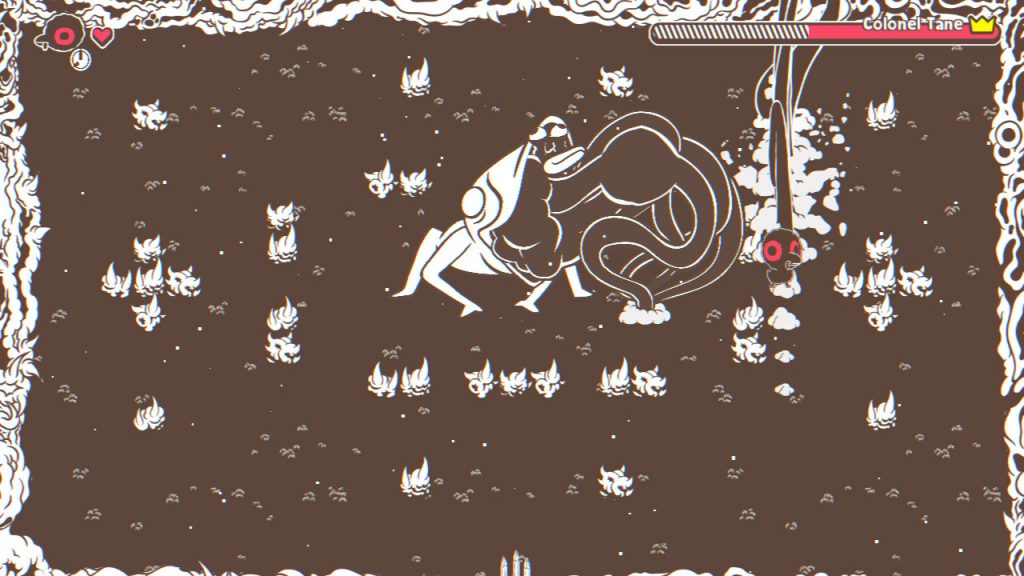 I swear that’s supposed to be a duck!

Now, there is one area that Ponpu excels in, and that’s the boss fights. Each of the bosses in the game is distinct, demented and beautifully hand-drawn. Though they’re all nominally ducks, they tend to push the boundaries of that definition. The bosses all look amazing though, full of freaky details. They also often make fun of the game industry. Case in point, one boss is an overweight programmer that slowly rolls around as he attacks you with his computer. Another could have come straight from Punch-Out!! And though some bosses were definitely irritating, since they all have a ton of health and some return later as mini-bosses, they nevertheless served as the highlights of the experience. Though I’ll always have nightmares of the second world’s body horror boss, and especially his ravenous tentacles… 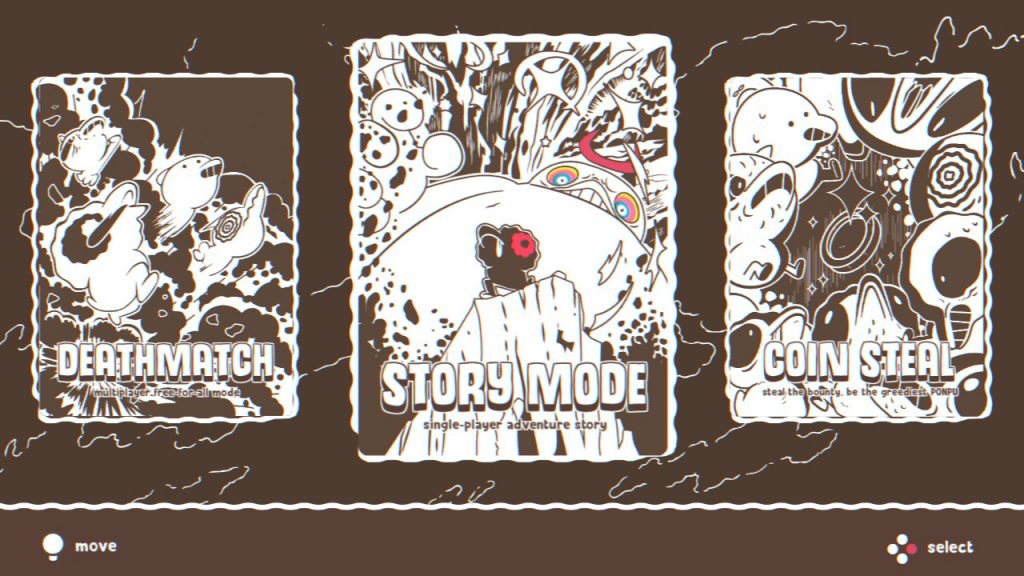 Visually the game is also quite nice. It’s all hand-drawn art, with a ton of intricacy to each design. Although there’s a lot of black and white use, the sporadic use of color to accentuate things like Ponpu eyes is effective. Honestly, the reason I wanted to review Ponpu was mostly due to the design, and it didn’t disappoint. The only area the art faltered was the frequency that your Ponpu’s head wobbles, which can be distracting. The music is more of a mixed bag. The main theme is great and pretty catchy, but oftentimes the soundtracks other than that are too laid back. There are even times where you mostly hear ambient noises but not much in the way of tunes, and that includes some boss fights. Overall though, the visuals and music are pretty neat. 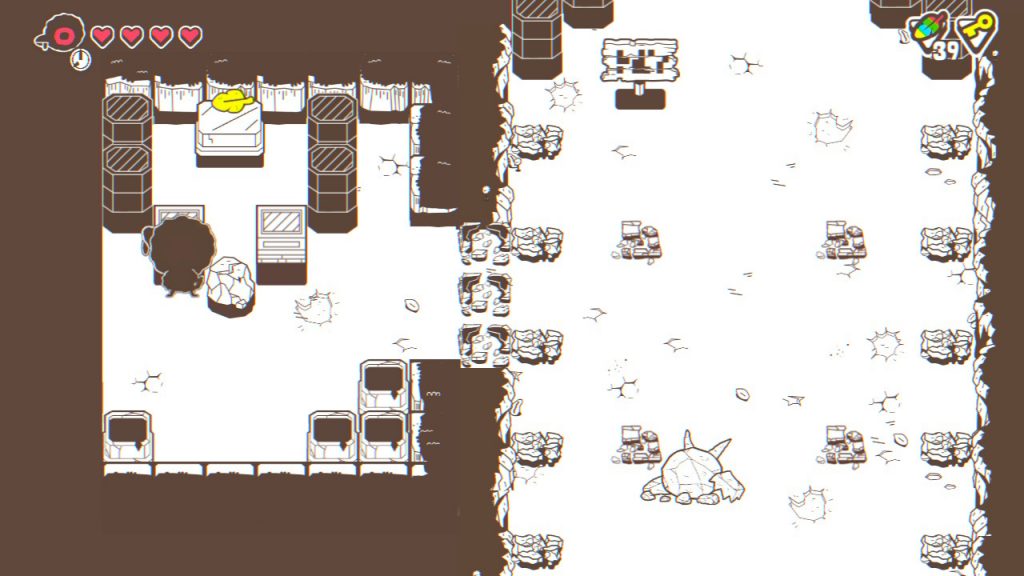 With those out of the way, now for the portion that always pains me. Though I feel the main concept and design of Ponpu are excellent, it’s also is held back by a ton of flaws. Not only are there several rough edges, but there are also some very weird glitches I encountered. For one thing, the control guide is a total mess. Not only is it unclear, but it actually indicates the wrong buttons for certain moves. A less serious issue is that it’s often hard to distinguish the exact range of your bombs. There were numerous times I swore a foe was within striking distance, activated my Remote bomb, only for nothing to happen. More of a problem is that it is frequently hard to differentiate regular foes from the background. Since everything is black and white, and they have no sound effects when they move, it’s easy to miss a foe rapidly sneaking up on you. Lastly, there’s a couple of glitches I encountered. In one stage, I suddenly found I could walk through walls. This wasn’t a problem per se, since it made me incredibly hard to kill. But it was strange. Another time I tried to walk into a door, somehow moved past it, and then when I walked back, I warped into the area I had been trying to reach. None of these make the game unplayable, but they certainly made it a messier and more frustrating experience.

More Of a Turkey Than a Duck

I really wanted to love Ponpu. The zany premise, delicious artwork, and Bomberman-inspired gameplay could have resulted in a triumphant indie classic. Instead, it was held back by glitches, occasionally sloppy game design, and a lack of real progress. But when you consider this was only the second time mobile developer Purple Tree tried their hand at consoles, I can moderate some of my frustration. If you’re a fan of Bomberman looking for something weird, then this still might be the game for you. As for myself, I find myself eagerly awaiting the next game from Purple Tree, and hoping it patches over any annoying imperfections. 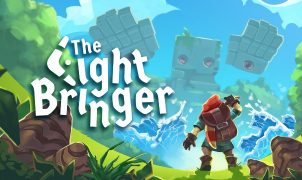 This is the Police Review (PC)

Wrapped Around Their Fingers     I live in the United States. Police has become a loaded word and it’s hard to get into anything that involves the word…