Get your karaoke on 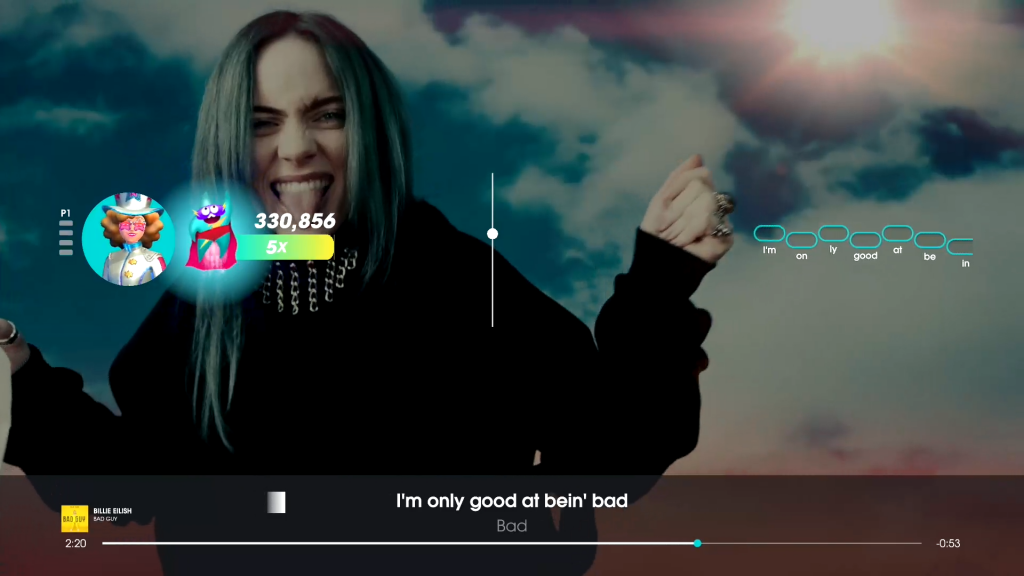 I’m in an odd spot when it comes to karaoke games — I love them, but I don’t know enough current songs to be able to sing along to many of them. Now this isn’t always an issue; the last karaoke game I owned I was able to learn a whole slew of new songs to belt out repeatedly in the comfort of my living room. So I figured this would be the case with Let’s Sing 2021, a brand new karaoke game available on Switch, Xbox One, and PS4 for $39.99. With 30 different songs and a wide variety of game modes that up to eight players at a time can enjoy, Let’s Sing 2021 seemed a total blast, especially with karaoke booths closed during the pandemic (if you wanna help your local karaoke place out, rent a machine for home use or buy a gift certificate, they could use the help right now).

So first thing’s first: no mic? No problem. There’s an app you can download for both iOS and Android that uses your phone’s microphone as the game’s mic. All you have to do is download the app, connect to the same WiFi as your Switch, then input the code on your Switch’s screen to your phone in order to pair the devices together. This is fantastic considering up to eight people can play at once, and it’s not like anyone wants to buy eight microphones, let alone one, to play a single game when everyone already has a mic in their phone. 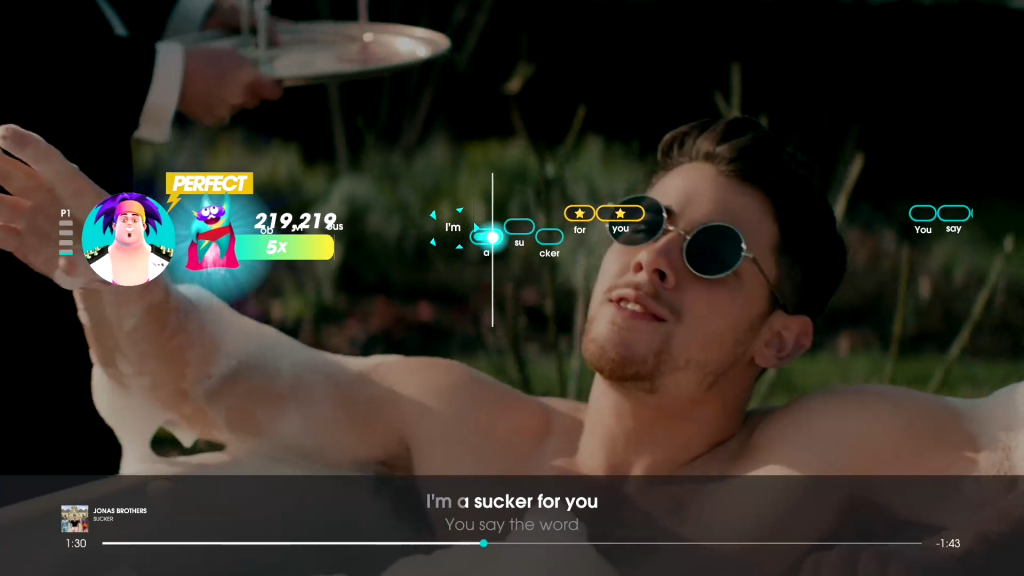 Let’s Sing 2021 has more game modes than any single human might know what to do with, providing players with many ways to play. There’s Legend Mode, which can be best described as a campaign of sorts to give a sense of progression as players are pitted against the available avatars, who act as rivals, going from one song to the next. For those who don’t want to bother with that and just sing like normal, there’s classic mode, where you can just sing your heart out like a regular karaoke booth, or World Contest, where you can do the same while racking up a high score against other Let’s Sing 2021 players around the world. You can also try to find who you’re most compatible with vocally in Feat. mode (either with friends, family, or idols), or Let’s Party mode, which places players in teams and randomly chooses game modes to keep things interesting. Mix Tape 2.0 allows you to mix different song snippets together to get wildly unique combinations, Playlist Creator which is fairly self explanatory as it lets players create their own playlist, and, finally, Jukebox mode, where players can just chill to the available music. 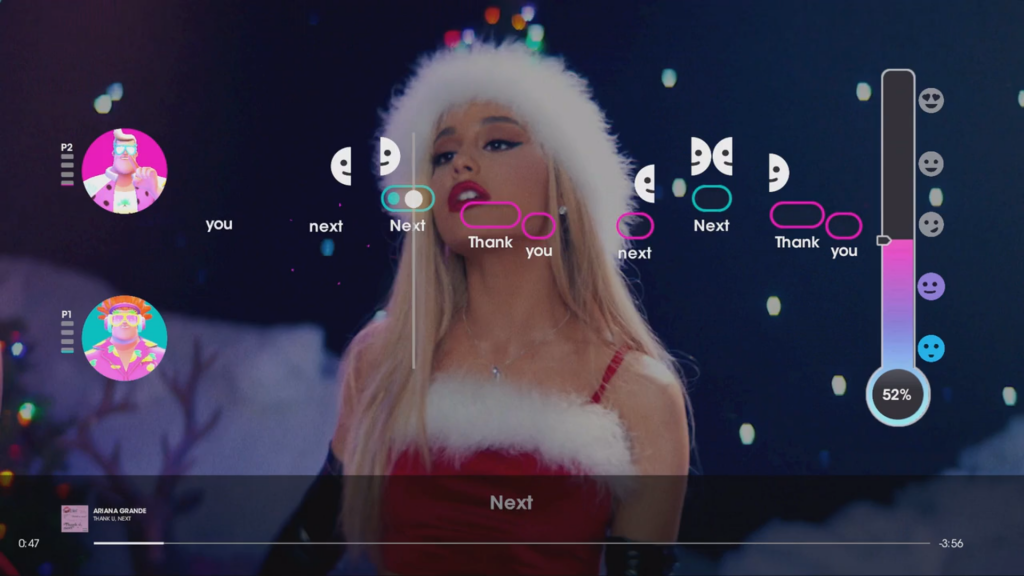 Let’s Sing 2021’s layout and design is super clean, which is helpful when you’re trying to hit the notes correctly and maybe don’t totally know the song. I definitely enjoyed the music videos playing in the background as well, giving other players something to watch while waiting for their time to shine. I thought it was very helpful to have the lyrics on the bottom in addition to being placed underneath the notes scrolling across the screen, as I sometimes the words would be broken up oddly on the notes section, so glancing down to the bottom enabled me to quickly memorize the next bar or two before proceeding.

As I was singing, one thing I found myself wishing for was the UI telling me what notes I was supposed to be hitting. There’s a vertical line in the center to help with timing, which is great, and higher notes are generally up more and lower notes are generally down more, but without trying (and often failing) at new songs not knowing which notes to hit, it would have been nice for those of us who can read music to even just have the option to turn staffs on. With that being said, I did enjoy the extremely clean UI, so I guess there is a trade-off. 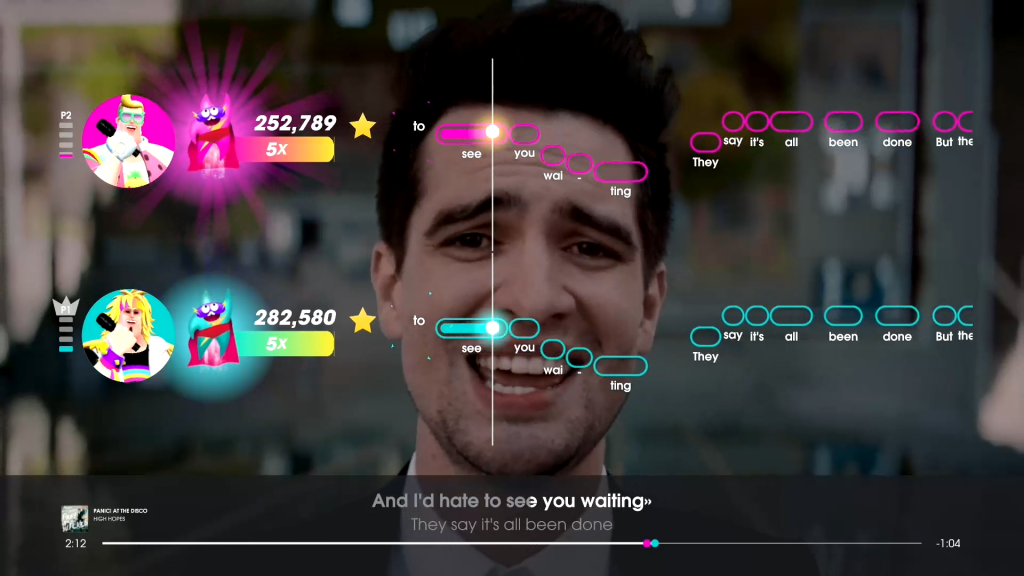 As for the songs in Let’s Sing 2021, well… I only knew two of them: Seal’s Kiss From a Rose and Lion King’s I Just Can’t Wait to be King. Some of the songs I’ve certainly heard on the radio a time or two, but not enough to be able to sing along, let alone well. Additionally, I found some of the choices a bit odd for karaoke, striking me more as dance tracks instead of sing-a-longs. Am I out of touch? No, it’s the children who are wrong (just kidding, I’m absolutely out of touch). Still, there are definitely some great choices that should make plenty of songbirds happy. The regular version features 30 songs, while platinum version, which is listed on the Nintendo website as $74.99, includes 85 songs. Really hoping they allow you to buy songs piece-meal as a DLC option like Taiko no Tatsujin does, otherwise I can see just as many people sitting this one out as those that choose to purchase the title.

The full tracklist for the regular version includes:

Ariana Grande – thank u, next

James Bay – Hold Back the River

Kim Wilde – You Keep Me Hangin’ On

Lewis Capaldi – Before You Go

The Lion King – I Just Can’t Wait to Be King

Panic! at the Disco – High Hopes

Sam Smith – Too Good at Goodbyes

Seal – Kiss From a Rose

Selena Gomez – Lose You to Love Me

Shawn Mendes – If I Can’t Have You

Tones and I – Dance Monkey

I wasn’t able to spend as much time as I’d hoped with Let’s Sing 2021 one because I’m not one of the cool kids who knows a lot of current songs, but I can absolutely see this pleasing plenty of people, especially at family parties. I will be on the lookout for any potential DLC in the future, but it’s otherwise got a strong songlist for those who generally enjoy top 40 hits from the past 40 years. If you want to test out your pipes while racking up points, consider snagging Let’s Sing 2021 for the Switch.

Editor’s note: This review is based on a copy of Let’s Sing 2021 given to HeyPoorPlayer by the publisher.