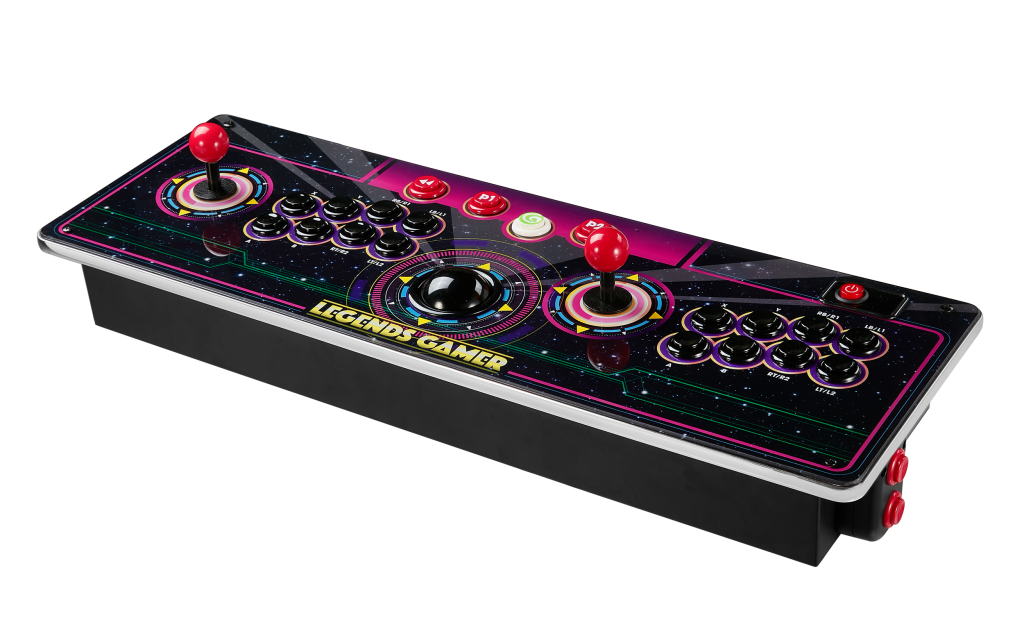 Following in the footsteps of SNK’s NEOGEO Arcade Stick Pro and Capcom’s Home Arcade, the AtGames Legends Ganer Pro aims to bring the arcade experience into your living room. At first glance, it’s a similar deal to its contemporaries. It’s an arcade-quality stick packed with some of the most memorable games of the 90s. However, that’s just scratching the surface. AtGames has also managed to cram an impressive, console-quality online ecosystem and a wealth of customization options into this unit that puts it lightyears beyond the competition. But is it legendary enough to justify its $249.99 price tag? 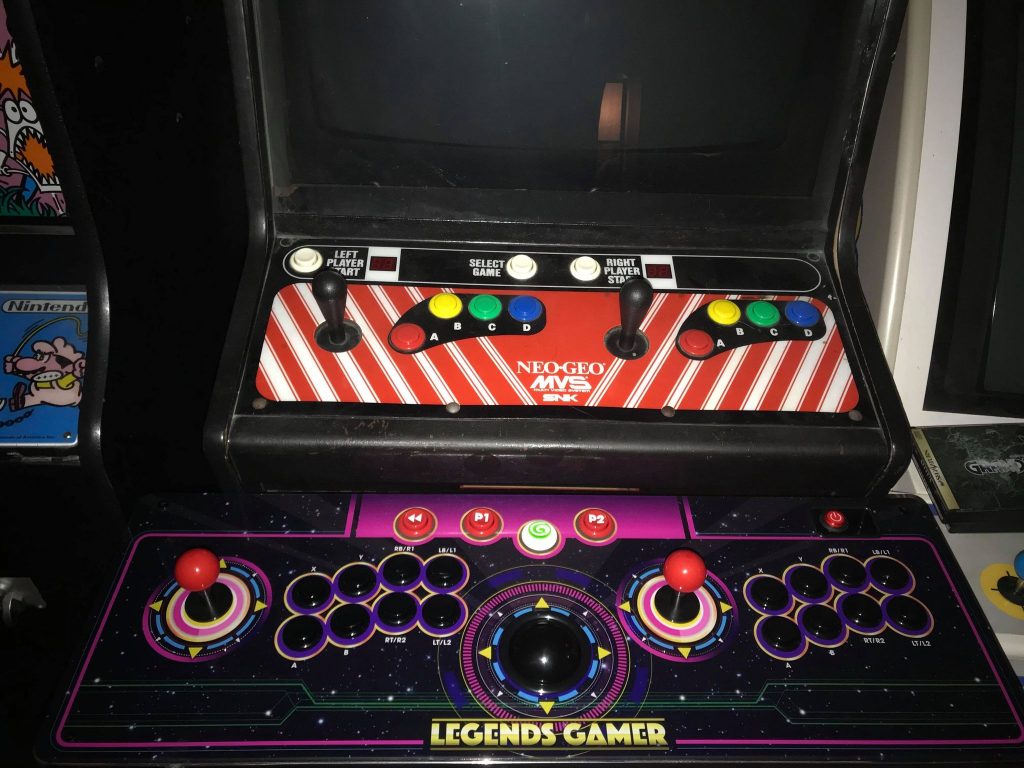 Upon cracking open its massive box, you’ll find the Legends Gamer Pro Stick, as well as the Core, a hockey puck-shaped unit that connects to your TV via HDMI and functions as the console itself. As you can tell from the picture above, the stick is massive. Featuring two joysticks, a trackball, and eight action buttons per player, it measures an impressive 29.53 x 3.75 x 10.03 inches; several inches larger than the control panel found on my Neo Geo four-slot cabinet.

So, how does it feel? Great, actually. It’s clear from the moment you lay your fingertips upon the unit that it’s constructed from premium parts. The buttons are snappy and responsive, the trackball rolls smoothly, and the microswitched sticks, while a bit fiddly when it comes to performing diagonals in certain games, are comfortable and have a nice throw to them.

Setting up the Legends Gamer Pro is simple, too. All you have to do is connect the Core to your TV with the included HDMI cable, plug in the power cable, then press the synching button on the Core and the controller then you’re good to go. It’s that simple. My only real gripe is that the HDMI cable that comes with the Legends Gamer Pro is a meager one-foot, so you might need to rearrange some things on your entertainment center to make it reach properly. Additionally, the Core doesn’t have a power button, so you’ll need to unplug it every time you want to turn it off, which feels like an unnecessary hassle. 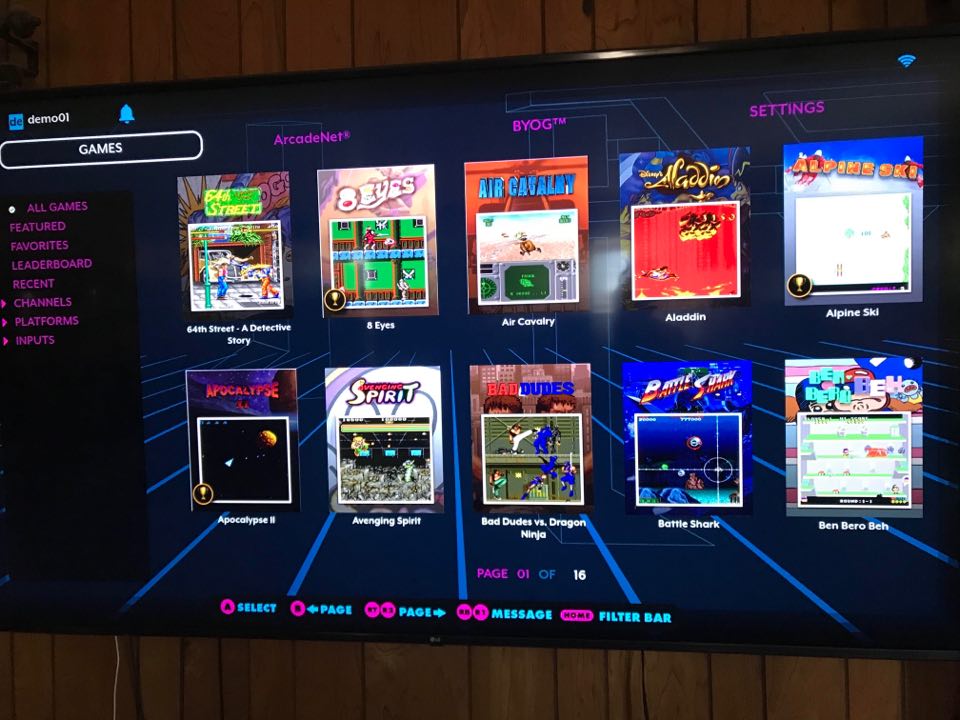 Once you boot up the system, you’ll see a sleek user interface where you can choose from the unit’s impressive list of 150 built-in games. The titles on offer include many console and arcade classics from companies including Data East, Disney, Jaleco, Taito, The Tetris Company, to name a few. You’ll find plenty of iconic titles here, such as Bad Dudes vs. Dragon Ninja, Space Invaders, Burgertime, Rastan, and more. There are also some light gun games, including titles Taito’s Operation Wolf and Space Gun. As you can imagine, playing these with a joystick is pretty clunky. However, they work pretty well with the systems’ trackball. What’s even cooler, the unit even offers lightgun support! So if you want to blast baddies to twitching pixels with the Legends BitBlaster Lightgun, have at it (for an additional $100)!

In addition to these familiar titles, there are also a handful of surprises that should please hardcore arcade gamers. Data East’s fantastic horror-themed beat-’em-up Night Slashers is a gloriously gory treat. Also, those wanting to get their high-flying adventure fix will love the Indiana Jones-inspired The Cliffhanger: Edward Randy. Of course, these are just a small sampling of the games included. There are tons of insanely good arcade games to enjoy, including a wealth of great Neo Geo titles for those who sign up for AtGames’ ArcadeNet subscription service.

While most of the titles bundled into the Legends Gamer Pro’s library make sense, a few left me scratching my head. For example, the Sega Genesis JRPG Brave Battle Saga is here courtesy of Piko Interactive. Also, if you’re a weirdo who’s dying to get your FPS fix in with an arcade stick, Technopop’s (RIP) criminally underappreciated 1994 DOOM clone Zero Tolerance is here to help scratch your itchy trigger fingers. 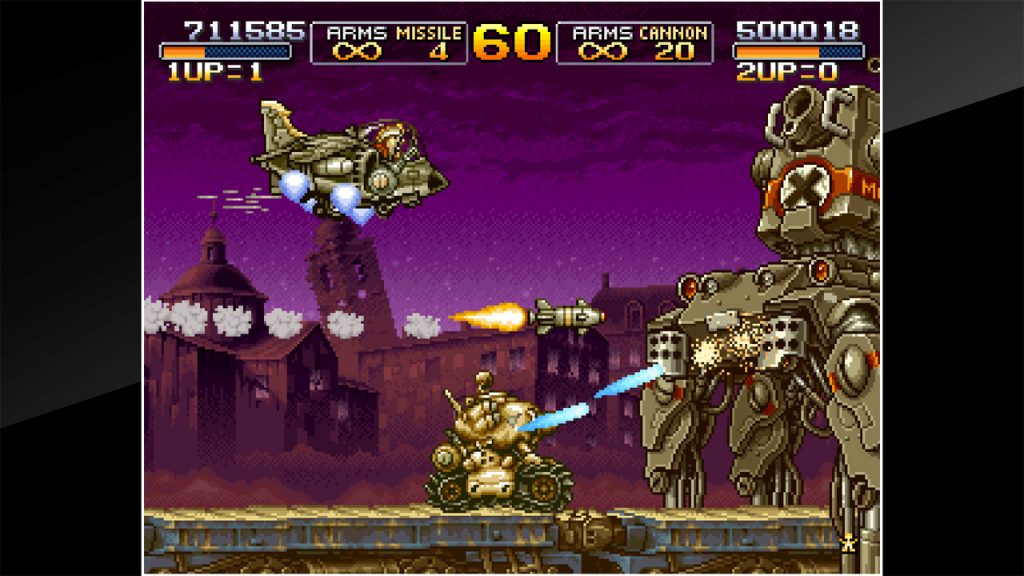 Of course, given this is the year we were supposed to have hoverboards, you can expect some modern amenities added to these titles. For starters, the Legends Gamer Pro offers multiple save states for each game, so you can pick up from where you left off at any time. You can also save your scores to AtGames’ online leaderboards or dig deep into the dipswitch settings of all of the included arcade games if you feel so inclined.

However, what impressed me the most about the Legends Gamer Pro is what the developer has accomplished with its online features. AtGames has succeeded in building a console-quality online ecosystem for the Legends family of devices. Do you want to play an online game of Metal Slug X with your friends? Go ahead and shoot them an invite over ArcadeNet. Feel like chewing that fat with your friends while you all play your own games? Well, you’re in luck. The service supports party chat for up to five users. I was honestly surprised by how easy it was to hop online and get gaming during my demo period with Jason from AtGames. Sending invites, adding friends, and launching games are very intuitive, making it a breeze to hop online and test your mettle against your friends.

Another great feature is adding games through third-party services like CoinOPSX and Pixelcade X via flash drives. Hell, you can even stream games from your PC to your Legends Gamer Pro through your local network. So if you want to stream some Mortal Kombat 11 or Guilty Gear Xrd -Revelator- from Steam to the big screen, then go for it. Again, I really can’t stress enough how impressed I was by how forward-thinking this unit is. AtGames’ Legends Gamer Pro pushes the envelope in ways the competition can only dream of when it comes to features and customization.

If you couldn’t tell by now, I thoroughly enjoyed my time with the Legends Gamer Pro. But that’s not to say it’s perfect. Some technical issues crop up occasionally to spoil the old school fun. The most frequent problem is some nasty audio delay and distortion that occurs with some titles. Check out the video of Street Hoop above to see what I mean. Now, this is a game I play pretty religiously on my Neo Geo cabinet, so I know how it should sound. And well, this isn’t it. I tried multiple HDMI cables on two different television sets and experienced this every time.

I honestly felt it made the game feel borderline unplayable as the scratching and stuttering voice samples assaulted my eardrums. These audio imperfections are also very noticeable in Hostages (known as RESCUE: The Embassy Mission here in the states). There was nearly a second of delay between when I’d pull the trigger on my sniper rifle and when the sound would play. Again, this certainly impacted the enjoyment I felt when revisiting this favorite from my childhood.

Another gripe of mine is the system’s rather unimpressive wireless performance. If you’re only updating the Legend Gamer Pro’s firmware, then it gets the job done. However, it’s mandatory to connect the unit directly to your router if you plan to use ArcadeNet. Even with my router just feet from the Core, it couldn’t keep up with the on-screen action, reducing my attempted bouts of Garou: Mark of the Wolves to a virtual slide show. Thankfully, after plugging it into my router, the online performance was flawless. Still, it’s something to keep in mind if your router is far from where you plan to be using the Legends Gamer Pro. 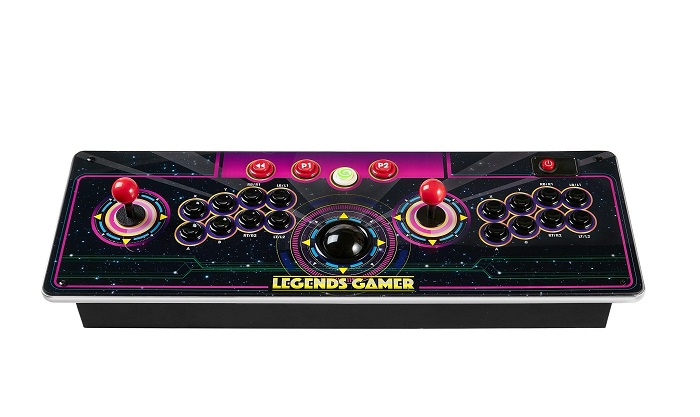 I’ve been collecting arcade machines for the better part of 15 years. That said, I’m pretty picky when it comes to arcade emulation. There were undoubtedly a handful of technical hiccups that bothered me. However, I think many casual players will be able to overlook, or may not even notice, some of the nagging issues I had with some of these games. Here’s hoping AtGames can address these problems–especially the audio quirks–in a future firmware update to make the Legends Gamer Pro the best it can be.

While I don’t think it’ll replace my arcade cabinets anytime soon, I had a lot of fun with the Legends Gamer Pro. It’s a well-built and versatile machine loaded with tons of classics from the glory days of home and arcade gaming. And with the ability to stream and add your own titles from various services, the number of games you can play is almost limitless. If you’re an arcade enthusiast and don’t have space for a cabinet in your house, the Legends Gamer Pro comes highly recommended.