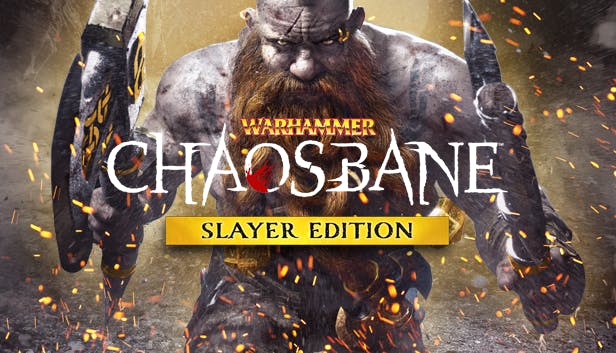 First released on consoles and PC last May, Warhammer: Chaosbane is here to christen the PlayStation 5 and Xbox Series X|S launch in an enhanced form. Dubbed the Slayer Edition, this updated port comes bundled with many improvements for Sony and Microsoft’s new hardware, such as 60 fps at 4K support, sharper visuals, and all the previously-released DLC. And though it may not be the most ambitious title to showcase the power of the current crop of consoles, it’s a quality co-op dungeon-crawler that devotees of the genre should enjoy.

More Content Than You Can Shake A Warhammer At 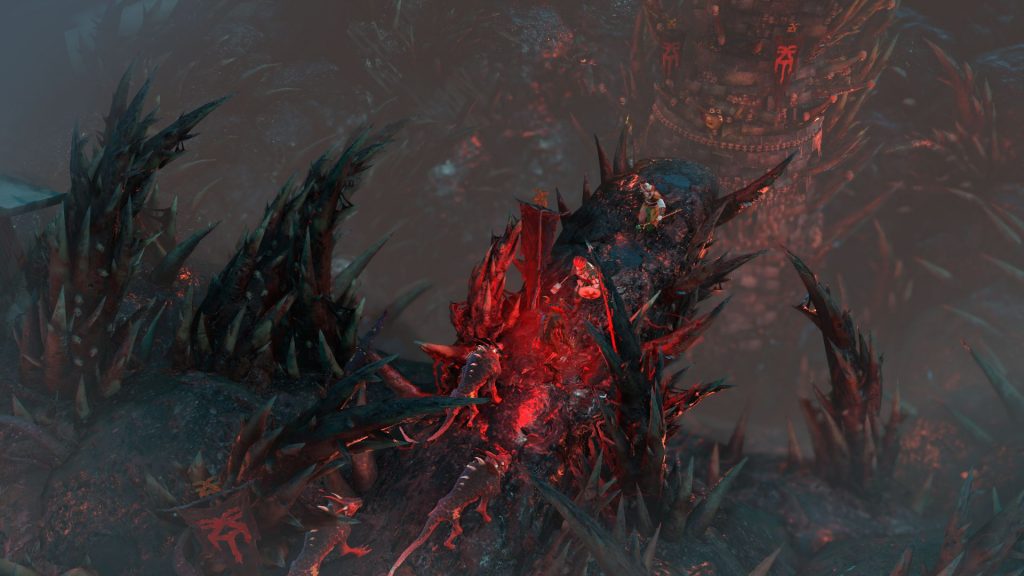 Hell of a view.

In case you’re late to the party, Warhammer: Chaosbane Slayer Edition is a loot-based action-RPG in the vein of Diablo. Set in Games Workshop’s Warhammer universe allows up to four players to delve into the dingy depths to battle crazed cultists and other monstrosities lifted from the popular tabletop game’s bestiary. As far as Diablo clones go, it doesn’t really do anything new, but it gets the job done. One of its best features is the game’s stable of playable heroes.

There are six to choose from, ranging from the balanced Empire Soldier to the DPS-dealing Wood Elf Scout who rains arrows upon her foes. They all play quite differently and have expansive skill trees, giving them a gratifying degree of customization when crafting your ideal warrior.

Warhammer: Chaosbane Slayer Edition comes with the new Witch Hunter, Jurgen Haider, and he quickly became a favorite.  Armed with a pair of pistols and a sword, he can switch between both stances with a flick of the analog stick. One of the coolest things about him is that most of his abilities change depending on which stance you’re using. So while one power may cause you to unleash a spinning hail of ranged destruction when wielding your dual pistols, with a sword, it becomes a savage sword dance that reduces your foes to mincemeat.

In addition to the Witch Hunter, Slayer Edition comes with all 12 of the previously released DLC content packs. The most ambitious of these being the Tomb Kings expansion. This update takes players to the Egyptian-inspired region of Nehekhara to explore ten tombs buried beneath the desert’s dunes. Altogether, there’s a mountain of content crammed into Warhammer: Chaosbane Slayer Edition that should keep players busy for quite some time.

Reforged For A New Generation 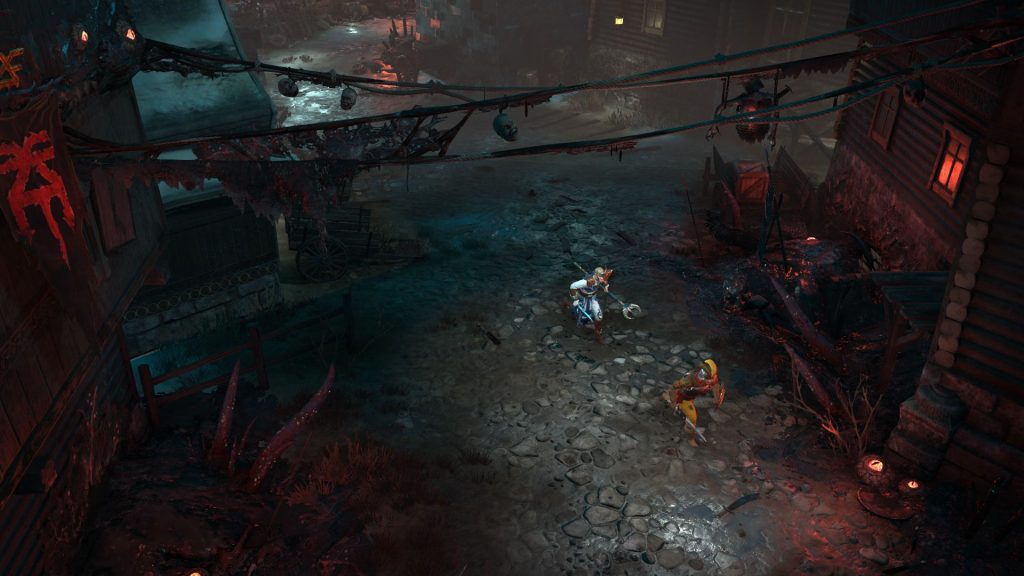 Exploring Chaosbane’s world is always more fun with a friend.

Of course, you can’t have a port for a new generation without the requisite performance updates. The advantages of the PS5’s speedy SSD are plain to see right from the jump. Warhammer: Chaosbane Slayer Edition’s load times are virtually instantaneous as you progress from area to area. Mind you, they weren’t exactly overbearing on the PS4, but this time around, you won’t even notice they’re there at all. It really does make all the difference.

Warhammer: Chaosbane Slayer Edition’s next-gen facelift isn’t completely breathtaking, but it’s noticeable. The updated 4K assets are a marked improvement. However, the character models’ small size makes it hard to appreciate the added visual fidelity fully. There’s also a bit of screen tearing from time to time that underscores that this is, at its core, a last-gen experience.

One thing I did appreciate is the game’s rock-solid 60 fps performance. Warhammer: Chaosbane Slayer Edition isn’t shy to throw dozens upon dozens of enemies at you at once. Thankfully, the PS5 handles these deluges of demons like a champ. Even when playing with a party of four adventurers where chaos, bullets, and enemy viscera filled the screen, the game managed to perform without breaking a sweat.

The DualSense controller is arguably one of the most exciting things about Sony’s new hardware. Sadly, this game mostly fails to take advantage of it. Apart from the adaptive triggers providing more resistance during your Bloodlust ability’s cooldown, there isn’t genuinely much to speak of aside from the dull rumble of the controller as you mow down hordes of baddies.

When all is said and done, Warhammer: Chaosbane Slayer Edition isn’t a technical marvel. Nevertheless, it manages to underscore the benefits of Sony’s new hardware in meaningful ways. 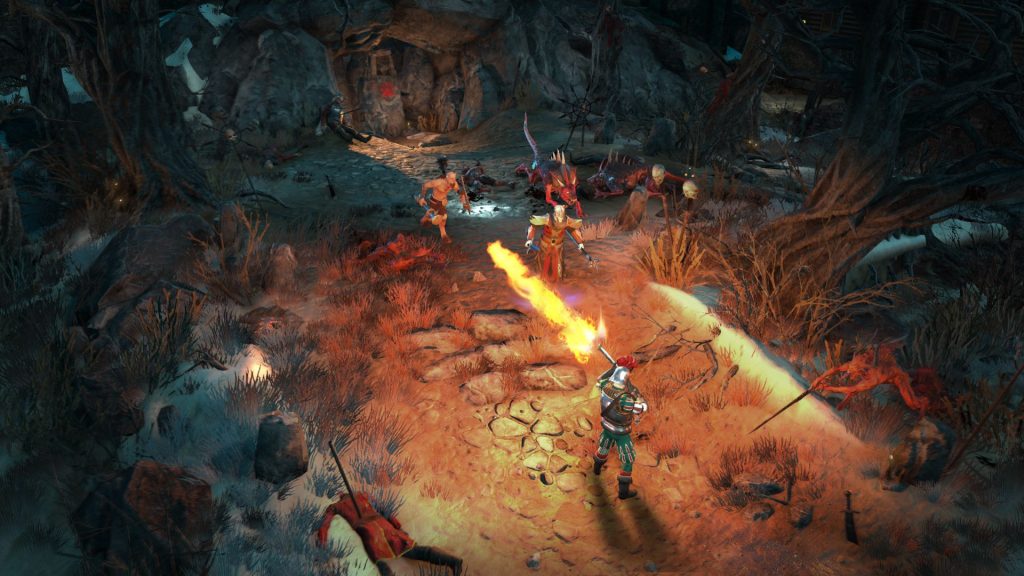 You’ll shoot your eye out, kid.

Like any Diablo clone worth its salt, Warhammer: Chaosbane Slayer Edition is at its best when you’re plundering tombs and murdering mobs of beast-men with friends. Games like this are just better when you and a full party are showing off your shiny new loot and tackling massive bosses together. Unfortunately, while fun bursts, I did find adventuring alone became repetitive fairly quickly. This is mainly due to the game’s repetitive “go here, kill this” quest structure and repetitive dungeon designs.

However, it’s worth noting that these issues aren’t exclusive to Warhammer: Chaosbane. Many games in the genre suffer from these same problems. And if you’re a die-hard fan of Diablo-style action-RPGs, you’ll probably be able to overlook the rinse-and-repeat nature of the game without much issue. And again, playing with the right group of friends can make a world of difference.

War, What Is It Good For?

When it comes to the launch games for Microsoft and Sony’s shiny new boxes, Warhammer: Chaosbane Slayer Edition seems like an odd choice. After all, it’s a port of a game that was released just over a year ago. Still, it’s hard to argue that it’s not a welcome addition to the PS5 and Xbox Series X|S libraries that are largely lacking proper co-op adventures. It’s nothing revolutionary. But with a dash of next-gen polish and a mountain of content to explore, Warhammer: Chaosbane Slayer Edition should keep fans of the genre busy for quite some time.