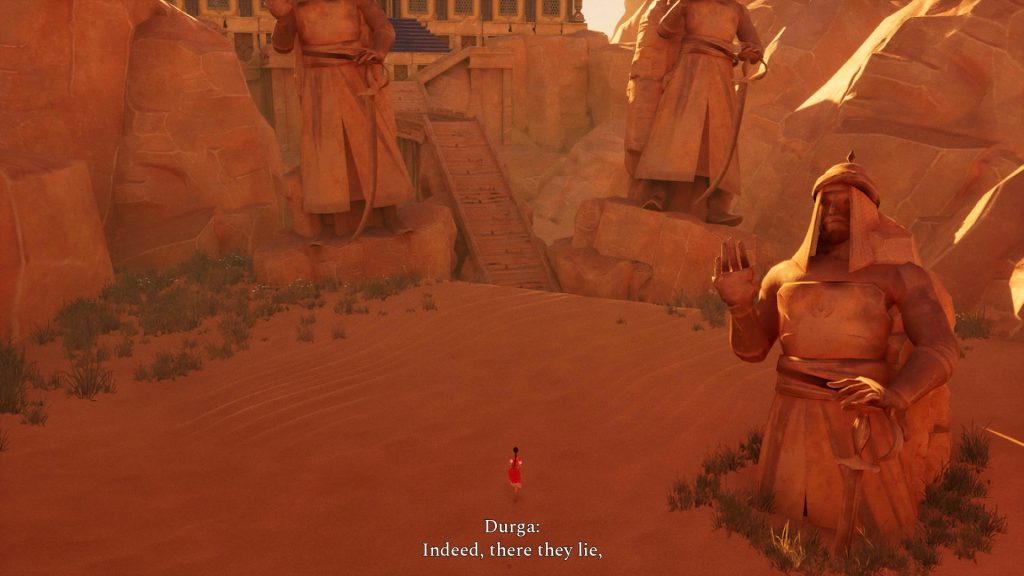 Developer Nodding Heads Games did a fantastic job delivering a visual epic in Raji: An Ancient Epic. It’s a beautifully designed, diverse adventure steeped in Hinduism. While not an entirely new concept to the genre as there were many titles before it that paved the way, like Asura’s Wrath, Skyblazers, and Unrest, which excelled at bringing light to the religion’s majesty and mysticism, Raji is a special little jewel that completely embraces everything that it is. It’s always great to see games stray away from the usual tragic Greek hero, fallen Norse god mythos, or your standard wandering Samurai that have been the staples in the past few years. Keeping things short, sweet, and simple, this action-adventure title will take you on a journey that even Karna himself would be proud of.

May Durga Watch Over Me 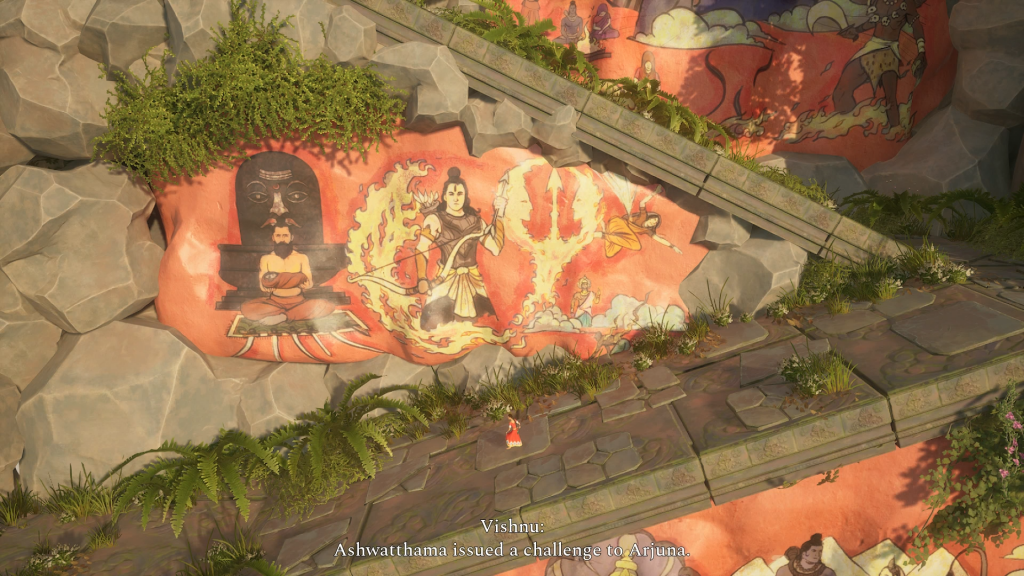 Like God of War and Dante’s Inferno before it, Nodding Heads’ action-adventure title is another epic tale that taps deep into mythology and religion. The story is centered around the main heroine Raji. She’s a simple circus performer who is forced on a perilous quest to rescue her little brother Golu after demons kidnap him for unknown reasons. Like every hero mixed up in the god’s affairs, Raji must now embrace her role as the chosen one and venture forth to face off against the hordes of dark demons under the command of  Mahabalasura’s, as they try to invade the very heavens and prevent her from saving her brother. Transporting players through the lush environments of ancient India, the general narrative will be told through the random banter between the mighty Maa Durga, Goddess of War, and benevolent Lord Vishnu, as the two gods ruminate about the many trials and tribulations that await their anointed hero. 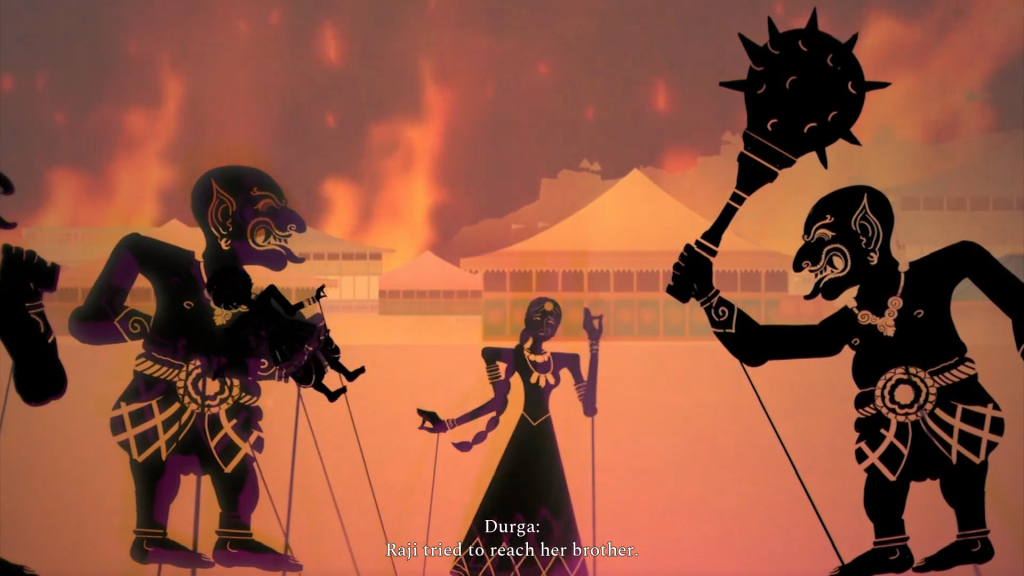 As I nimbly guided our parkour princess throughout the sand-blasted temples and hopped across giant lilypads, a majority of my time was spent taking in all the effort the designers put into each stage while searching for the various wall paintings and puzzles littered throughout. Shimmering and shining like a well-lit Christmas tree, Lord Vishnu will begin to weave his glorious stories recounting the legends behind India’s various deities. While they were a bit long-winded, as each painting was a part of a series, I thoroughly enjoyed absorbing all the lore each one had to offer. Dashing in a bit of its Balinese culture, the game delivers a great story, driven by strong family bonds through shadow puppetry. Each time an act transitions we are given an illustrated Wayang show, almost as if little Golu himself spins the tale through his own perspective. 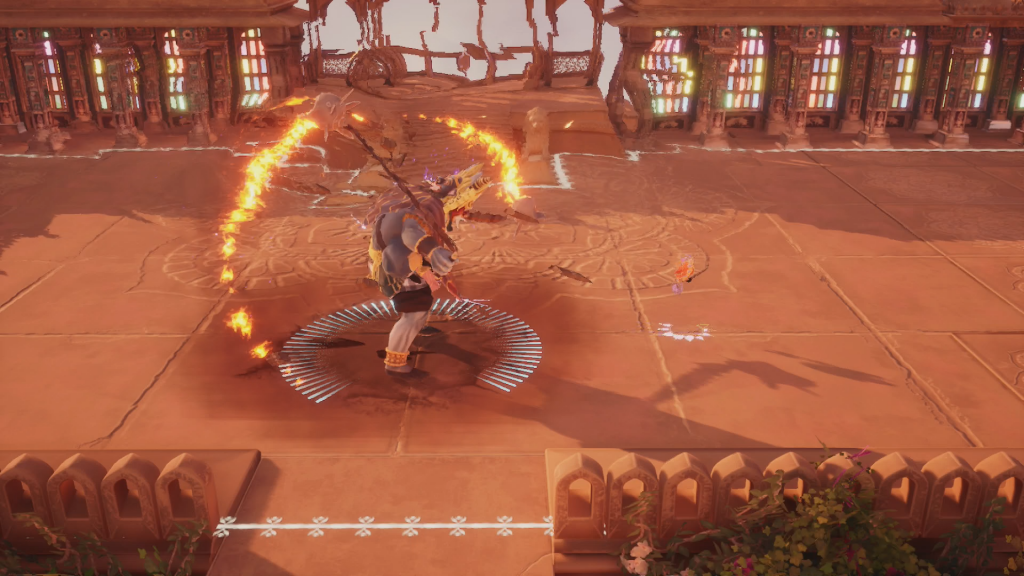 Nope you won’t hit me.

Raji: An Ancient Epic delivers a story-packed adventure, with its combat and exploration serving as the driving force behind the experience. After receiving her godly pep talk in the form of tutorials, our young heroine will then be faced with traversing several different locations, each with their own set of puzzles, platforming segments, and demons to overcome. An excellent callback to the high-flying playstyle of the classic Tomb Raider titles, and just like Lara before her, Raji will have to make use of her agility to wall jump, run, flip and climb her way through all the level’s linear parkour segments. As you continue to explore your way through the different areas, you’ll begin to unravel how refreshing this take on the action-adventure genre truly is. 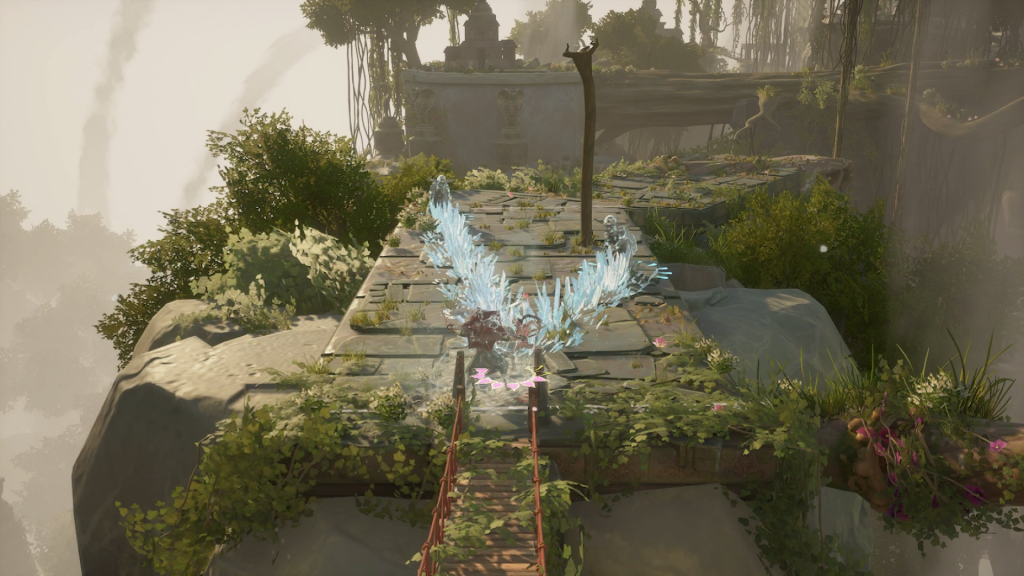 Combat genuinely hurt my soul and was one of the game’s less flattering aspects. While I can respect what they were trying to do by tapping into the fast-paced, strike and retreat playstyles of more modern hack-n-slash titles, skirmishes often felt sluggish and redundant. Never knowing when the next horde can come creeping out of nowhere, Raji will have to deal with a barrage of interruptions from the plethora of foes who have nothing better to do than stand in her way. If there’s a clearing ahead, then there’s a good chance somebody up there wants to kill you. But no divine hero is complete without some gear blessed by the gods. Giving Raji a slight edge in combat is her mini arsenal of divine devastation and attacks, weapons ranging from Durga’s electric-based Trishul (looks like a trident to me), an overpowered insta-kill Chakram, as well as Nandaka and Srivatsa, the sword and shield that comes equipped with a powerful block ability. As you discover the true depths of your array of godly gear, you’ll also unlock new “blessings” or elements to help enhance the overall usefulness and destructive power of your weapons. 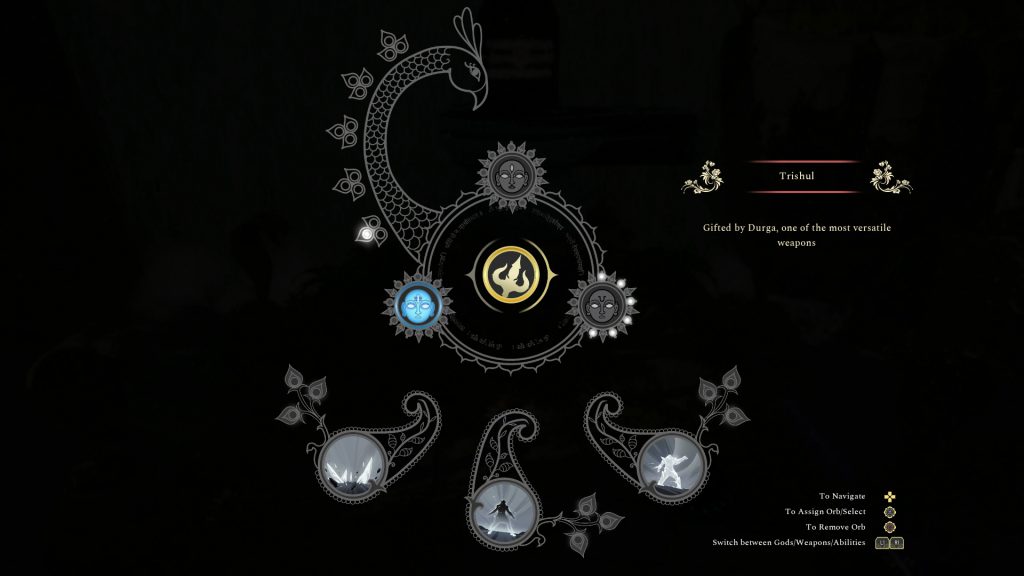 Raji has a whole lot of help at her disposal, including a small arsenal of godlike weapons, acrobatic dodges, and light and heavy attacks that are literally meant to close and create gaps. Hell, she’s even protected by virtue of being the main character in the story. So you’d think Raji would be ready for anything thrown her way. Yet all of the tools at her disposal still don’t make up for the lack of the most useful tool in action game history – the quick action dodge. Just like the annoying Zerg, enemies come at you non-stop and in numbers and take no issue in stunning the crap out of you. Forcing you to pray to the gods above as you smash the dodge button to stay as light-footed as possible. But it’s a sad state of affairs when the one thing that matters most, invincibility frames, are almost non-existent. With so many demonic spawn trying to take you out, you’d expect evasion to be a vital part of tiny Raji’s toolset, and yet dodging literally puts you one stun-lock away from being completely overwhelmed. In all honesty, once you acquire Nandaka and Srivatsa you’ll find that blocking is much more useful than dodging.

More than just the Taj Mahal 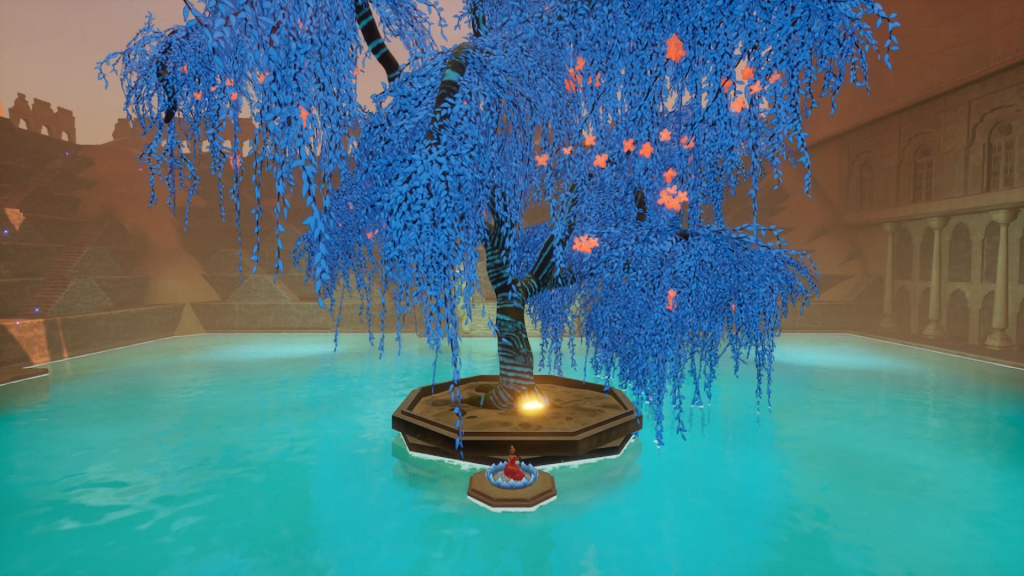 A prayer a day keeps the demons away

The landscapes in this game are just absolutely incredible to look at. From the very moment you step foot into ancient India, players are given a sky-high view of the immaculate display of vivid colors. The impressive sights and sounds of Hindu and Balinese cultures and mythology come together beautifully, to say the least.  Every sandstone pillar and marble-floored corridor glistens with beams light from the sun or moon, giving even the darkest areas a gleaming bright spot. The second act is probably the most amazing stage in the game aesthetically and a possible fan favorite. Finally getting a break from the first stage’s scorching desert settings, this moonlit marvel was just extremely pleasing on the eyes. From its giant lotus-shaped waterfalls to its brilliant lighting, and even those massive fish that glide by from time to time. Everything this stage had to offer truly set it apart from the others. Just based on the game’s visual appeal and use of ambient classical Hindustani instruments, I could tell the developers poured a lot of pride and love into their heritage while building this gem.

Despite the clunky combat, I can say without a doubt you can easily lose track of time while immersed in Raji: An Ancient Epic‘s pleasing aesthetics. As you explore its vibrant world, the spectacle and the splashes of Hindu legends and lore more than make up for the slightly sub-par skirmishes. Taking everything into consideration, I quite enjoyed everything Nodding Heads Games’ action-adventure title had to offer. Drenched in a lavish, mystic experience, this is one grand adventure that is recommended for any fan of the genre. While a bit on the short side, it’s still worth more than one playthrough.

Sofiya and the Ancient Clan Review: From Good Witch to Bad Witch in No Time Flat   I truly had no idea what to expect from Sofiya and the…