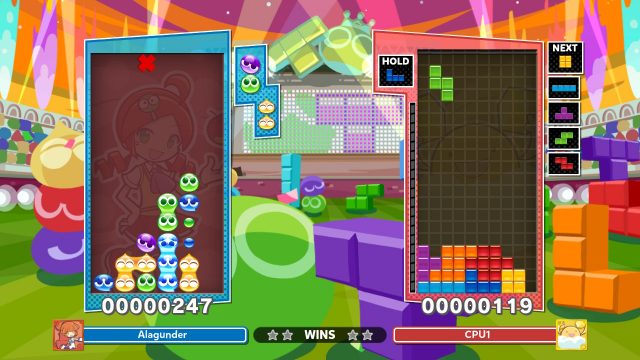 2017’s Puyo Puyo Tetris — or 2014’s, supposing you live in Japan — proved itself an outrageously fun “I never knew I wanted this” crossover between two of gaming’s biggest puzzle franchises, with SEGA’s sequel in Puyo Puyo Tetris 2 bringing back much of the the same joy: the explosion of colors, a lovable cast and its sugar-rush addiction in popping Puyos and solving Tetrimino clusters bringing us back again and again. Yet Puyo Puyo Tetris 2‘s August announcement had many fans wondering how it’d differentiate itself from the original: with only one major new feature to its name with the rest treading familiar ground, could this puzzle mash-up truly supersede its predecessor?

As expected, the core gameplay is much the same: SEGA’s Puyo Puyo has the player strategically placing color-codded combinations to pop and overwhelm their opponent, whereas Alexey Pajitnov’s Tetris has us clearing lines upon lines of Tetriminos for the same goal. Both puzzle games operate separately and simultaneously depending on your mode of play — regular Versus matches can separate opponents into respective Puyo Puyo vs Tetris Matches, whereas Fusion Mode combines both blobs and blocks into a tricky juggling match. From Swap to Big Bang to the six unique Challenge modes, Puyo Puyo Tetris 2 offers a veritable variety of addictive modes to waste away your afternoons. 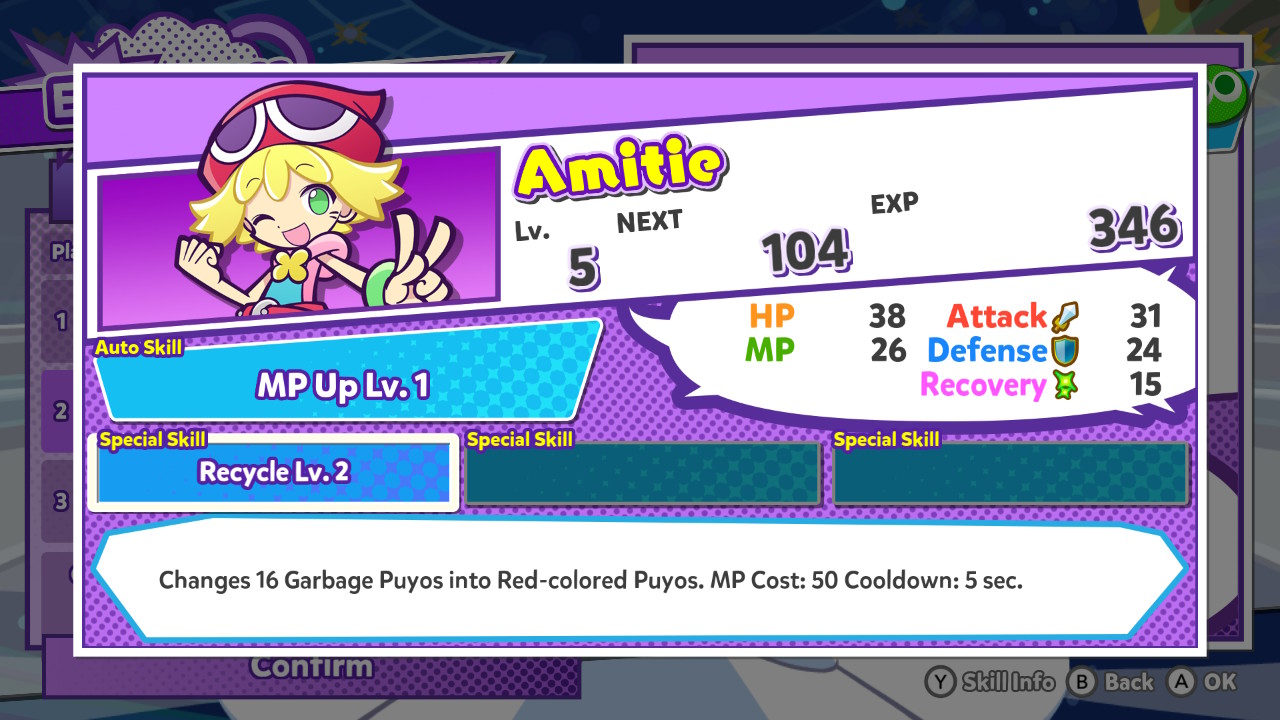 All familiar to original Puyo Puyo Tetris veterans, you understand, but Puyo Puyo Tetris 2‘s Skill Battle brings something new to the table. By forging 3-man teams of your favorite characters, you utilize their respective skills and any additional items you equip to tilt matches into your favor; for instance, you can utilize Arle to buff up your attack for a limited time, or use Tee’s Sharpshooter to eliminate the bottom two rows. So long as you keep your MP Bar in check, playing your cards just right may have matches over in a matter of seconds! It’s a much-appreciated layer of strategy  that’ll certainly wrack your puzzle-loving brain. (Alas, I only wish there were more convenient shortcuts in editing your team — you have to traverse all the way over to Options to do just that.)

This carries over to the Adventure Mode, where Skill Battle matches level up your teams in relevant matches. Of course, more casual players like myself are swept along by the adorable adventures of Ringo and the gang, where a precarious case of déjà vu strikes as worlds collide once more. As an energetic script and exuberant voice-overs worm our way into our hearts within this light-hearted tale, all this serves as a clever backdrop in easing ourselves into the game’s mechanics. Of course, if you don’t have time for fluffy cartoon nonsense, Puyo Puyo Tetris 2’s gracious enough to skip any and all story sequences and just let you ease pop Puyos and solve Tetriminos. (And if you need to cool-down from all this crossover zaniness, fret not: Lessons return and teach you everything from masterful Puyo popping techniques to how Skill Battles operate) 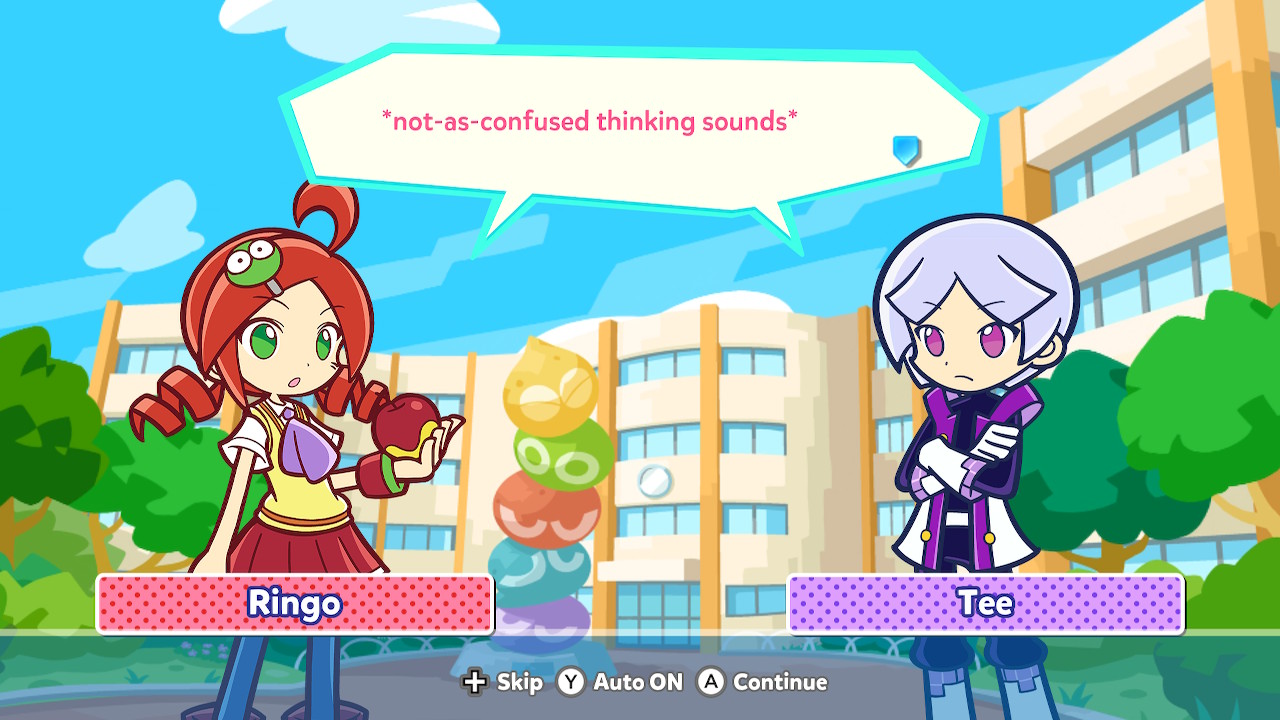 In case we hadn’t hammered this point down enough: Puyo Puyo Tetris 2 is wholly incremental. This is hardly a bad thing itself: those still polishing their Puyo Puyo Tetris game will be all too glad to jump to next-gen consoles and active online spheres, and new players shouldn’t have any new troubles jumping in. Yet for those who already had their fill back in 2017, the addition of just one new mode might find themselves hard-pressed to justify a $40 purchase. Speaking as someone who only just discovered SEGA’s wonderful crossover earlier this summer, our future review will discuss just that!

Puyo Puyo Tetris 2 arrives on December 8th — while Nintendo Switch was our console of choice, the game’s also releasing for PlayStation 4, Xbox One and Xbox X. A PlayStation 5 release is scheduled for later this holiday season, but PlayStation 4 users can simply purchase a digital copy and download the game onto Sony’s new console; meanwhile, Steam users can expect a release sometime next year.