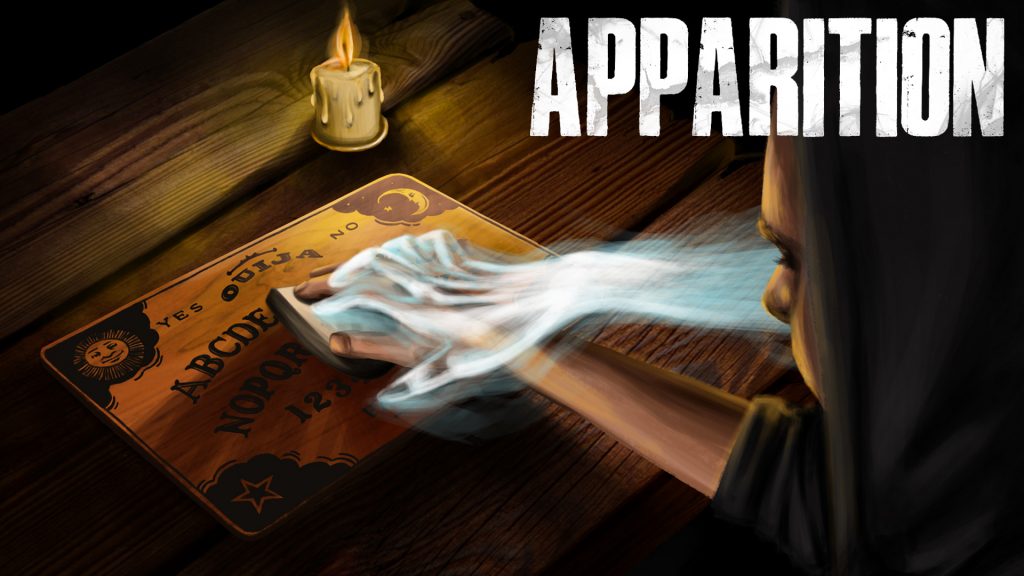 I’ve never really liked calling games “bad” when I’m reviewing them. Sure, it would be easy to do that, but doing so would also be blanketing every single part of the game at once—and things are rarely ever that black-and-white. It also feels like an unnecessary insult. People (presumably) put time and effort into making games, and every game, no matter how small or obtuse, has to at least have some fans out there. So, yeah, I think that flat-out saying that a game is “bad” is pretty damning… but that doesn’t mean that it isn’t necessary to call things as you see them.

Apparition is, well, not great. I still refuse to call it “bad,” because I don’t think that every single thing about this is worthy of enduring such a critical label. There are some things about this game that are genuinely good—like, for instance, its premise—but, sadly, such things are outweighed by the negative aspects which, when all thrown together, create an amalgamation of issues that are too big to ignore.

Hot on Your Trail 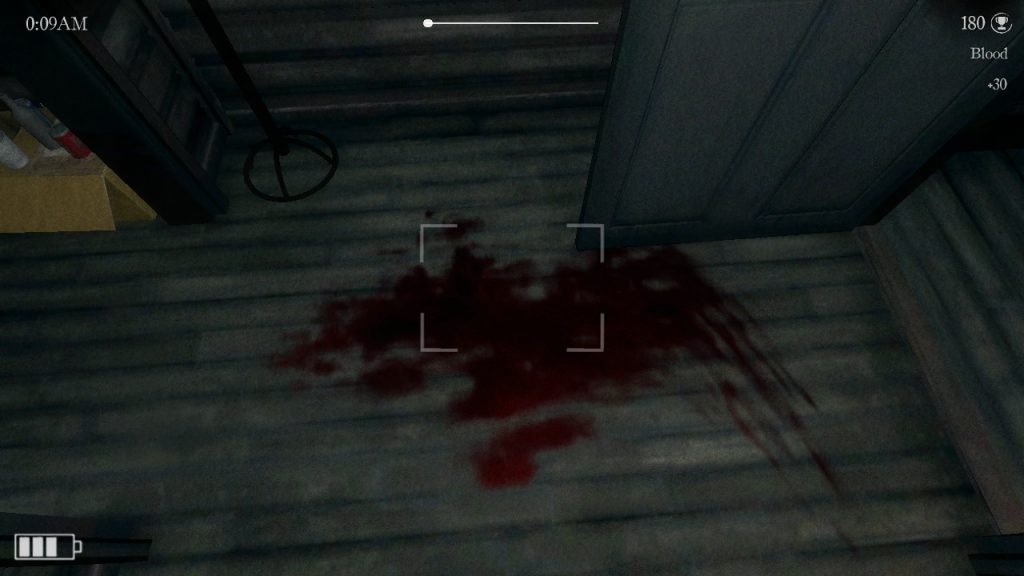 Their loss is your gain!

Apparition is a short, arcade styled horror title wherein the player takes control of a paranormal investigator as they attempt to find evidence of otherworldly activities within the supposedly haunted Green Creek. However, unlike most horror games, which are fairly linear, Apparition doesn’t technically have a “true” objective outside of collecting evidence. Oh, and making sure that you don’t die.

By doing things like photographing various pieces of evidence—such as blood stains and body bags—or the many monsters lurking about, or communicating with the dead via a ouija board, players can collect points. After collecting enough points—something entirely up to the player’s discretion—all you need to do is get back to your car, and, bingo—you’ve completed your run. You can then use your points to purchase new items to bring along with you, after which you head back out into Green Creek once again in order to beat your previous score. That’s literally it. 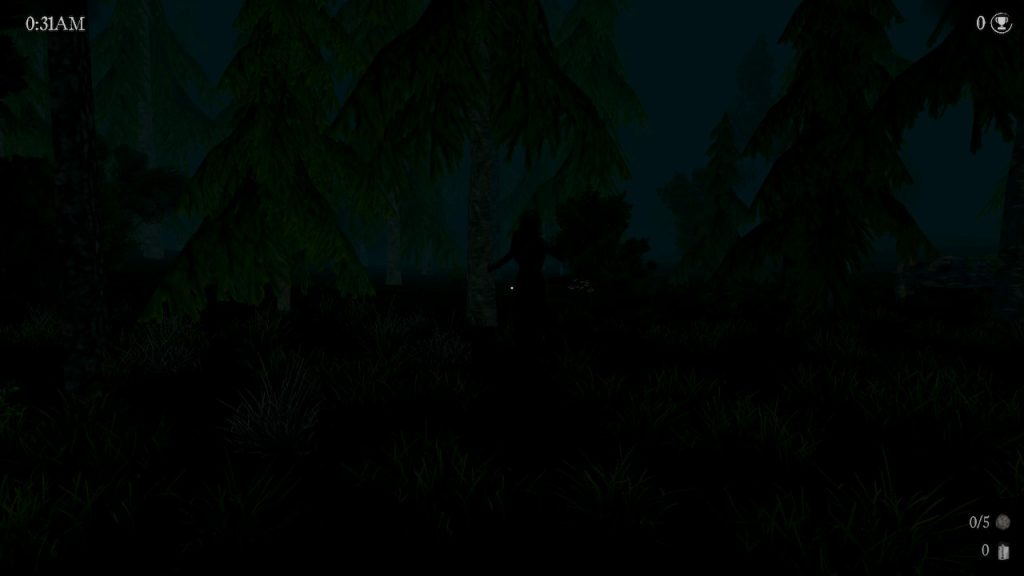 If you look closely, you can see the monster that’s seconds away from ending this run!

So far, it might not sound so bad. And, if you’re thinking that right now, I’d even be inclined to agree with you had I not played the game for myself. But I have, and it turns out that, while Apparition‘s premise is cool, its execution is anything but. And, to prove it, I’m going to walk you through my first few runs with this game. Don’t worry, I promise that I won’t embellish anything.

Apparition‘s world map isn’t very big, and I had assumed that it wouldn’t be. So, immediately hearing monster noises as soon as the game started, I bolted from my car to the nearby house while collecting a few materials (yes, there’s crafting) along the way. As the noises got closer, I turned toward the window to see the noisy abomination itself saunter past it. The timing was perfect, so I snapped a few pictures and collected a few points. The monster made no indication that it noticed me, so I thought I was good. Suddenly, I heard the door opening, a horrible cry indicating that it knew I was there, and, a few seconds later, I was dead. The second time around I made sure to look around the house. As it turns out, I probably should have done that the first time because there was a nice, big closet for me to hide in—which is exactly what I decided to do. Then I waited for it to go away. But it never did. That thing literally walked into the house, stopped, and camped in the house all night. Eventually, however, the sun started to rise, so, thinking I was safe, I cautiously stepped out of the closet—only to immediately get spotted and killed. 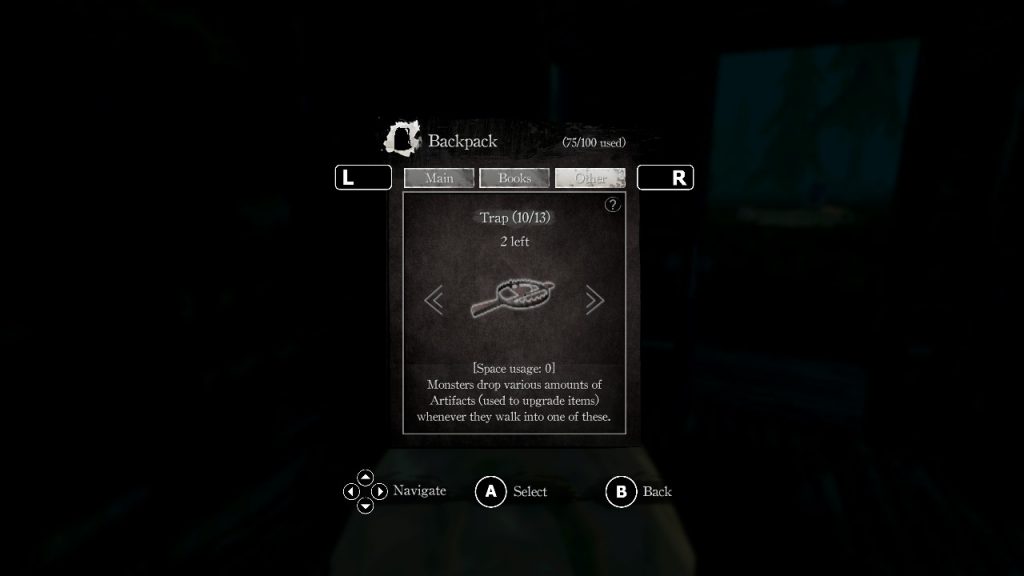 Apparently, you can trap monsters with these? I wouldn’t know though—the game never let me put one on the ground.

Hopefully, you can see the first problem by now—there’s clearly something wrong with the AI in this game. And it’s not just that monster, either. No matter what I did or where I went (outside of the safe zone that is the basement), I was apparently never clever enough to snap some juicy, close-up, candid monster pictures without getting torn to shreds in the process. Could some of this be my fault? Sure, player error is always something that you need to keep in mind. But the fact that this game consistently felt so hopelessly frustrating wasn’t helping, either. I get that this is supposed to be a survival-based game, and that’s completely okay. But, in order to actually ensure that the player can, you know, survive, it doesn’t hurt to let them get their bearings a little before letting half a dozen (or maybe just, like, four, I don’t know) monsters—all of whom behave differently—start roaming around. Also, the sound balancing in this game is awful. No matter where I went, it almost always sounded like the monsters were right behind me.

Have You Played the Luigi Board? 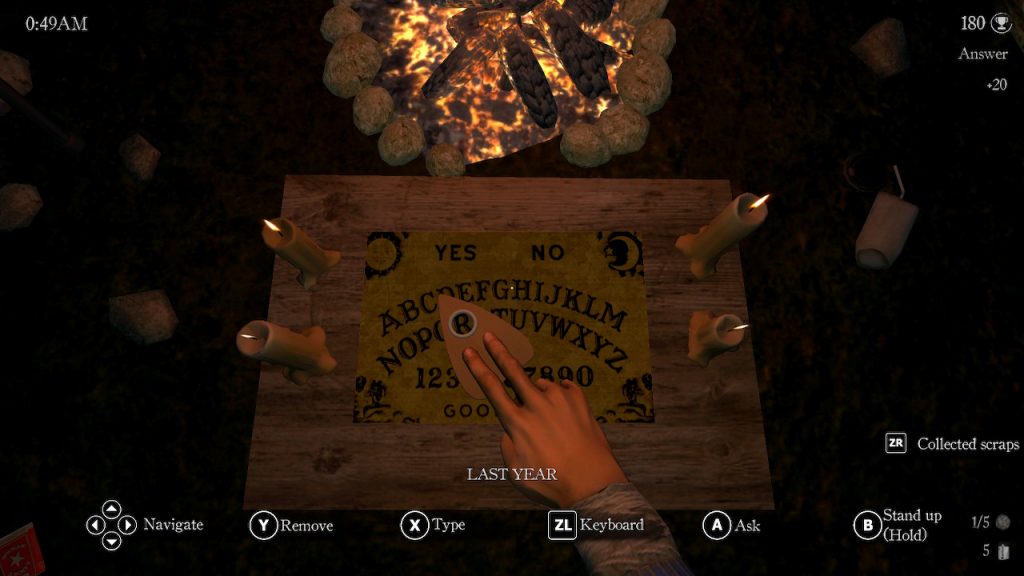 Honestly, the game would have been better if it had just focused on this.

Okay, so you know that whole “player error” thing that I talked about? Well, it turns out that there was some of that going on after all. Apparently, you’re not supposed to just run into the house and get killed—you’re supposed to interact with the ouija board, first! At least, that’s what it seemed like. So, I did. I have to give credit where it’s due, here—this part of the game is surprisingly well-done. Each of the spirits that I talked to felt very unique, and the fact that you could type in your own questions—many of which were met with valid answers—was extremely satisfying. So satisfying, in fact, that I would have been fine doing this for most of the game. But I couldn’t. Since the game forces you to set up the ouija board out in the open, you’ll typically only have a few minutes to speak with the dead before you need to run and hide (or die).

Given this time limit, the question quickly turned from how to get information, to what to do with said information. And, as far as I know… nothing. The ouija board mechanic, despite seeming very important, was little more than a way to collect some bonus points before resorting to having to play hide-and-go-run-to-your-car. 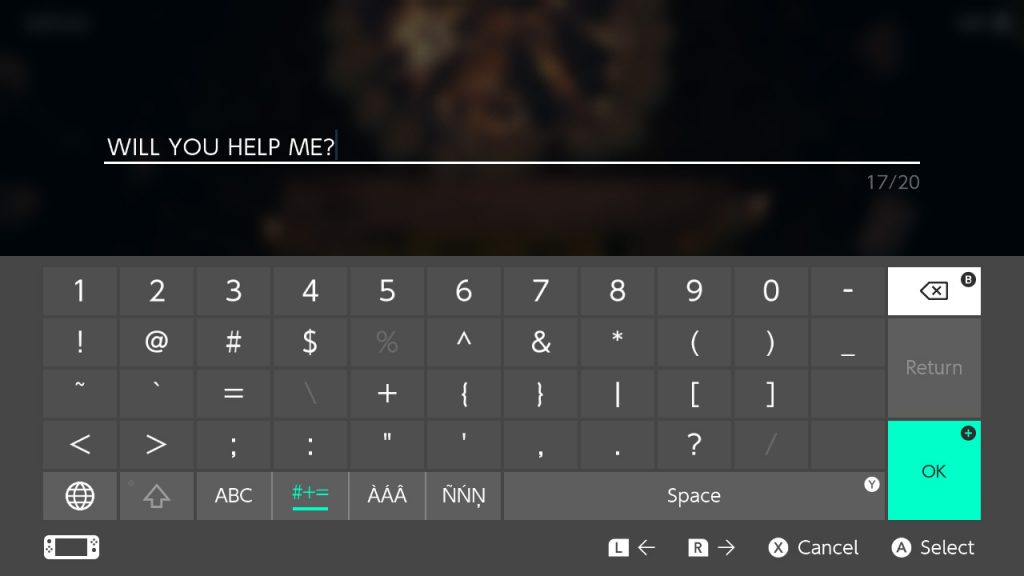 The fact that you can ask your own questions is a very nice touch.

This is, without a doubt in my mind, the most frustrating part of this game. They did such a good job with the ouija board mechanic—why didn’t they utilize it more? There are so many better ways that they could have gone about things. I would have loved the game to start with a ouija board segment which, depending on how you play your cards (or questions, maybe?), determines which monsters appear, or maybe even how they act. Instead, Apparition gave us a well-programmed mechanic that was placed somewhere that actively punishes players for enjoying it too much. I have no idea why this was set up in the way that it was, but I sure hope that the devs do a better job with it if there’s ever an Apparition 2.

Apparition is yet another example of a game being good in concept but bad in execution. I truly wanted to like this game. There are some really neat concepts, the ouiji board is fun to play around with, and the idea of only being able to bring along certain pieces of equipment could make for a grand, albeit nerve-wracking, time. Unfortunately, instead of the game that Apparition could have been, we got what essentially amounts to a slightly more developed Slenderman clone. The moral of the story: don’t’ ever assume that a game will be good just because it sounds like it should be.

Full disclosure: This review is based on a copy of Apparition provided by the publisher.