Time for the ultimate application of science: Beautification! 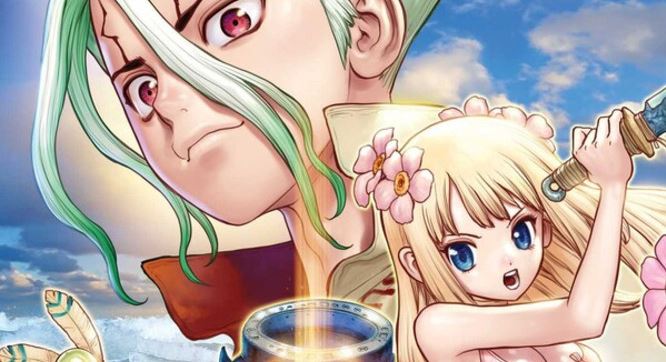 Don’t you just hate it when that happens: you’re thoroughly enjoying the latest installment of your favorite manga — a veritable page-turner  gut-busting mischief and gripping developments — and before you know it…it’s over. In this case, Dr. Stone Volume 13’s ending completely snuck up on me; not that it didn’t conclude on a fine spot, mind, but as always, I was so busy delighting in the science-y antics of Senku, Kohaku, and the rest that I hadn’t even heeded the approaching ending. Yet this was no cause for sorrow; once again, writer Riichiro Inagaki’s passion for science imbues a gripping life-or-death scenario — that being the few remaining members of the Kingdom of Science infiltrating an island tribe somehow in possession of the stone-petrifaction power — with wild solutions and humiliating scenarios brewing a brilliant concoction of suspenseful comedy.

As pointed out last time, Dr. Stone abandoning the safety of Ishigami Village signals a shift in storytelling conventions — no longer can Senku and co. idle away at crafting wacky inventions with vague threats looming over their heads, as the petrifying denizens of “Treasure Island” are hardly hospitable to their new visitors. With most of the crew already stone-solid, our heroes have no choice but to walk the tight-rope, searching for shelter and tinkering away as they fool their new neighbors with silly disguises. Not that the series hasn’t engaged in tension-packed developments before, but I can’t recall it ever setting up a captivating game of cat-and-mouse — wherein the series intersperses its beloved edutainment lessons between heart-pounding stealth segments under the eagle-eyed watch of enemy natives.

Yet flirtation’s the name of the game here, and if Kohaku’s innate lack of fashion sense renders her ill-equipped to blend into Treasure Island’s signature harem, then it’s time to dive into the science of make-up cosmetics. It’s always a riot to witness the rustic Ishigami Village residents world dive into the unknown world of modern-world conveniences, with the ardent resistance that is Kohaku’s follicles being the latest test subject. For those intolerant of Boichi’s, ahem, “unique” vision of the female anatomy, fret not: Kohaku refuses to settle for damsel-in-distress inaction, with and all any fanservice immediately overwritten by her active agency, switching back and forth between two separate roles as she attempts to unlock the secrets of Treasure Island. (To the point where, in a last-ditch effort to deceive an enemy combatant, she’d even plant a left-field kiss — ooh-la-la!) 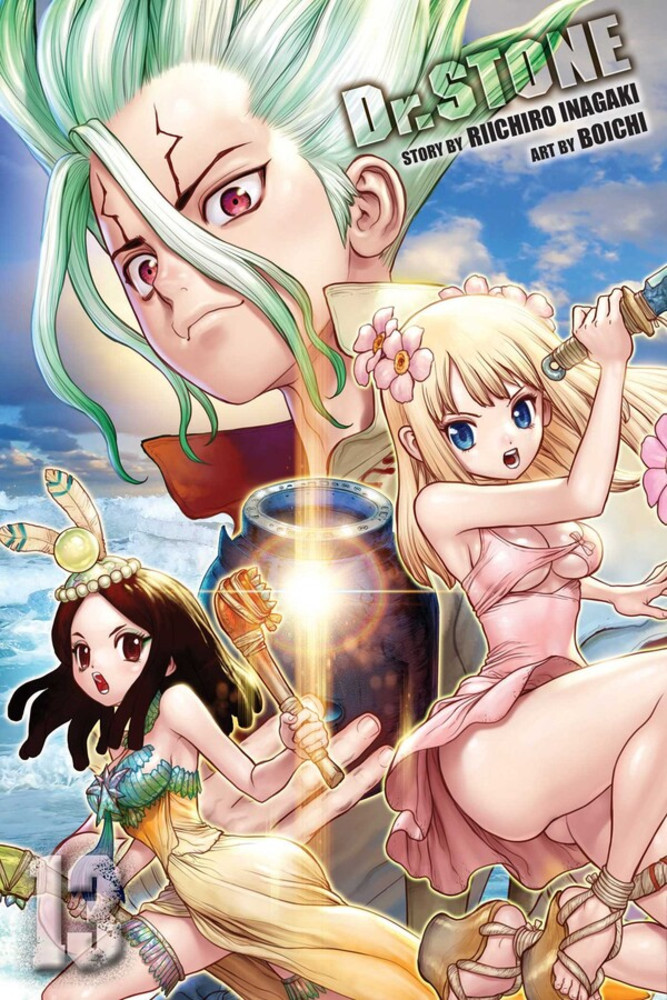 Of course, no Dr. Stone comedy would be complete without the presence of a certain cowardly guardsman: as it happens, Ginro survived the petrifaction attack, and our hapless heroes can only watch him choose between escape or pluck up the courage to sneak out with their mobile laboratory. As Kohaku points out, while Ginro certainly possesses the necessary qualities as a valuable asset, the character’s self-centered drive for status, lechery, and self-preservation often smothers any such selfless chivalry, so it’s always fun to watch the character squirm against his shoulder angels. But true to Dr. Stone‘s not-so-hidden beating heart, while it takes a certain other apple-masked survivor to give him the final push (and, perhaps, some brotherly trust from a petrified victim), he can be endearing when he wants to be. (Alas, this doesn’t mean he’ll avoid humiliation for long; as it happens, the team requires another deceptive “maiden” to kiss up to the nebulous “Master”…)

Which reminds me: while we meet a number of new antagonists in this volume, none are more intimidating than the Master’s right-hand man: Minister Ibara: A bony, black-eyed visage of horror, Boichi’s art shines no more than here in this spine-tingling villain. Not once but several times over do his onyx eyes bore into our own, Boichi’s hyper-detailed art accentuating every static wrinkle and still, bone-chilling stares that inspect tire-tracks and suspicious barrels for even the slightest sign of trouble. Whereas previous villains overwhelmed our protagonists with staggering power, Ibara’s attention to detail sets the stage for an even playing field: a battle of the minds.

As an elderly Byakuya Ishigami gazes up at the stars one last time, we’re reminded once more that the calculations and equations fueling Dr. Stone‘s titular character isn’t as stone-cold as he’d like to pretend. Such is the appeal of one of Weekly Shonen Jump’s best series: not patronizing its readers with preachy lectures and corny after-school science lessons, but genuine passion in presenting science as an indispensable necessity. Be it through decades of hard work for the sake of future generations or even toiling away at something as silly as make-overs and harem antics, all are but individual ounces of Dr. Stone‘s infectious energy.