When regular depression and quarantine depression love each other very much… 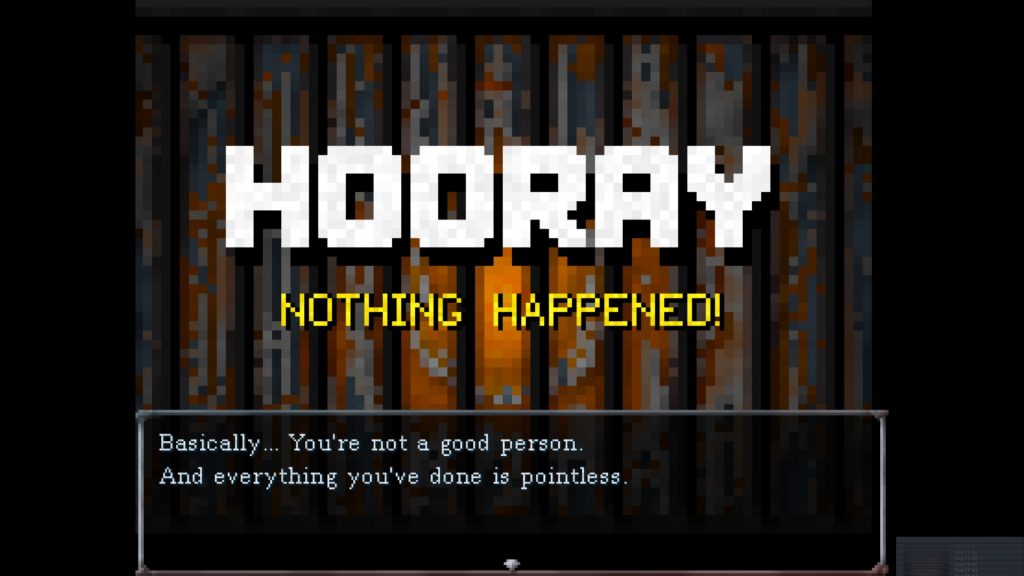 I wasn’t the most outgoing person before the pandemic and I’ve always struggled with depression/suicidal thoughts, but things have definitely gone to extremes ever since lockdown started. I haven’t been to my office since mid-March, and I typically only leave my house a few times a month for groceries and go immediately home. The rest of my time is spent in an endless cycle of waking up and grabbing my phone or computer to check up on work stuff. Days have melted into each other, time is meaningless, and even the most basic things feel foreign now. Now with the added fires in California forcing us to keep our windows closed, let’s just say I basically don’t move from the couch anymore, my mental health spiraling downwards.

So, naturally, I’m obviously drawn to a game like Shut In, a commentary on this exact situation that I’m sure millions of us are currently experiencing.

Created by indie dev Cael O’Sullivan and published by Hidden Track, Shut In, available on Steam, is a testament to the highly unusual times we’re currently living through due to the COVID-19 pandemic. O’Sullivan worked very closely with mental health professionals to bring to life his own experiences during quarantine, and Hidden Track, a UK-based theatre company, shifted its focus from live theatre to supporting indie developers in an effort to maintain social distancing while staying true to its vision. A concept that would have never been born and a relationship that normally never would have been forged made possible by a deadly virus — truly, 2020 is an interesting year. 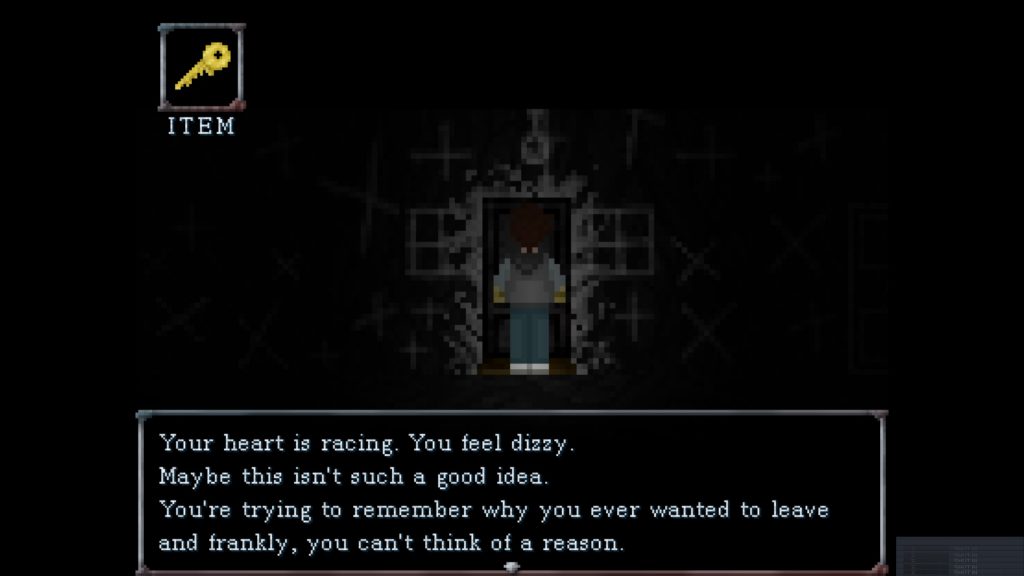 Shut In has players taking control of an absolute shell of a human being (if you can call them that) in an attempt to get them out of bed and performing basic functions like face-washing, teeth-brushing, and hair-combing. Unfortunately, this is quite difficult, as said shell’s inner voice is apathetic at best and negatively critical at worst, making it hard to scrounge up much motivation to complete aforementioned tasks. Still, self-care is still a good idea no matter who’s whispering intrusive thoughts in your ear, so up and at’em, carpe diem, yadda yadda you get the idea.

As you get further and further from bed, anxiety, depression, and intrusive thoughts start to take over, the home becoming darker and more dangerous. Death waits around every corner — a shelf can come crashing down a crush your spine, bugs can strip your bones dry within seconds, and creatures that go bump in the shadows can rip you to shreds while laughing gleefully. You’re not that bummed out by your untimely death, naturally — in fact, you literally cannot be bothered to care and hope those that killed you got something out of it. Whatever. There’s always tomorrow. 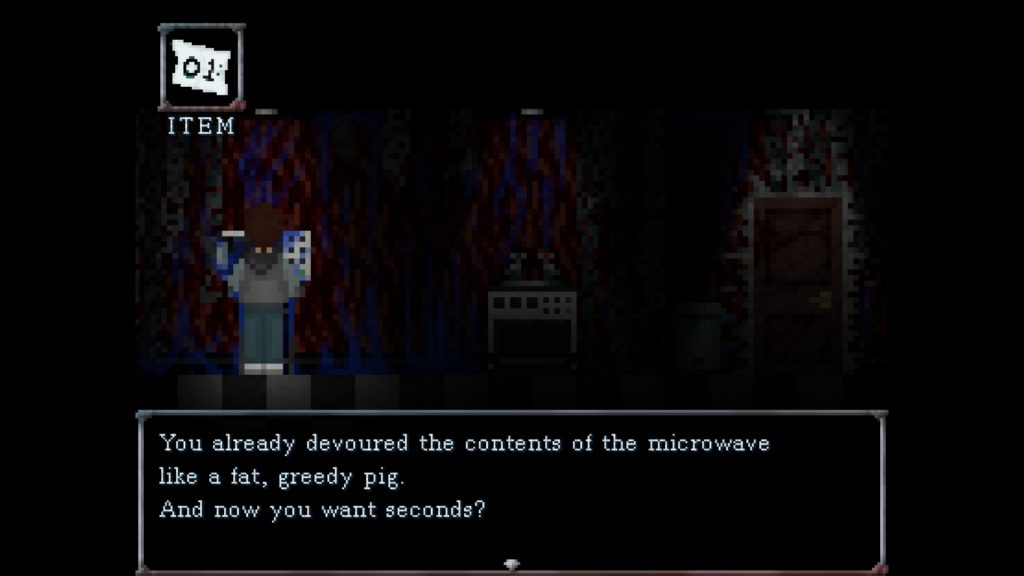 I’m not going to lie, I’ve never felt more unintentionally *seen* by a video game before. So many of the little things in Shut In were right on the money when it comes to depression and intrusive thoughts. At one point you pull out a completely new toothbrush and use it for the first time but note that it’s been so long that you’ve brushed your teeth that, even though they feel cleaner, only a dentist can really save them from your neglect. This directly coincides with scientific evidence that shows those with depression suffer from dental decay, since oral hygiene, amongst other things, falls by the wayside during depressive episodes. I know mine are pretty damaged due to a years-long episode of severe depression, so that felt really close to home.

Although Shut In got a lot right in terms of how severe depression looks and feels, in terms of a game it often felt more confusing and frustrating than its genre counterparts. The studio touts the experience as an hour long playthrough at most, but my first foray into the COVID-19 depression simulator took over four hours. I get they’re trying to show how incredibly difficult it is to do anything with depression (I’m very guilty of suddenly being aware the day has flown by while I can’t account for any of my time), but when you’re actively trying to progress and nothing is intuitive at all, the game stops being enjoyable, and this one already is such a downer that it’s hard to find the real-life motivation to continue. 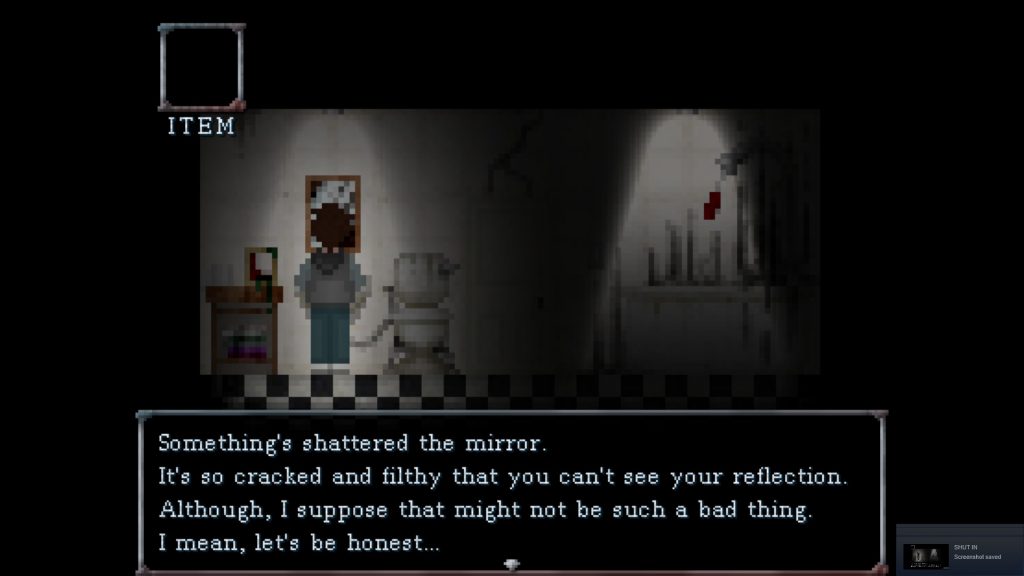 For example, there’s a point where you have to microwave something in order to eat, and while I was provided with the amount of time needed to microwave in minutes, the seconds portion was nowhere to be found, either by design or by me missing the location. With no other way to proceed, I punched in every number in order until I hit the right one (it’s 1:34, you’re welcome), spending an awful lot of time just trying to force progression simply by guessing. It wasn’t fun, and it didn’t convey the feeling of depression and anxiety that the rest of the game was bringing, the tedium dragging down the game in the wrong direction.

Additionally, I wasn’t feeling Shut In’s control scheme; although it wasn’t bad per se, it was more that I kept getting the buttons confused with each other. It’s more of a minor gripe than anything, but they just weren’t all that intuitive. And with no true pause button to stop the timer that is counting how long it takes you to play the game, no save states so if you need to quit midway through you’ll have to start from the beginning upon booting up the game again, and no real hint system to assist when you’re stuck, I kind of felt trapped at certain parts with no real means of progression or escape. And from a gameplay perspective, this would knock any other title… 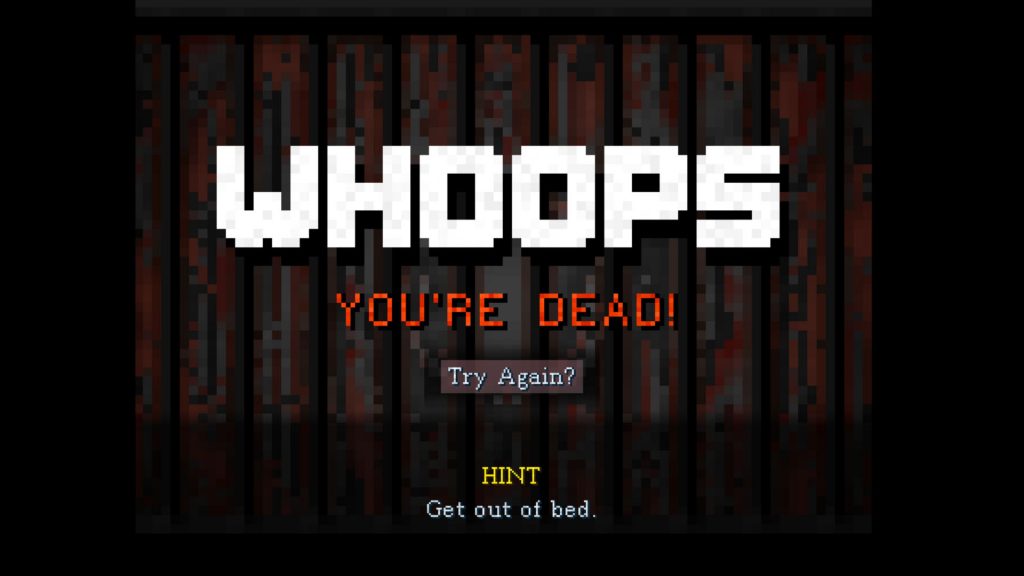 …but oddly enough, it works to an extent for Shut In. Remember, this game is supposed to recreate what it feels like to experience extreme depression, anxiety, and dissociation, and even in its moments of frustration it does a good job of it. Wandering around confused about how to perform basic tasks, not knowing where to even start is such a hallmark of depression, ADHD, and other mental health issues that this surprisingly worked out. Of course, it seems completely unintentional, and any other game it’d be detrimental, but considering the topic matter it just added to the overall sentiments instead of completely detracting.

Shut In provides multiple endings depending on how you played the game — speedrunning through will yield a boring result, and you’ll be graded on how many of your objectives you were able to complete (I have no idea where I’m supposed to find that hair brush), but it’s all ultimately the same: do it all again tomorrow. The apathy felt towards everything perfectly encapsulates how quarantine has been playing out; every time you die, there’s applause with the conclusion being that you can always try again tomorrow. Even winning — leaving the house and getting fresh air — feels pointless in the end, since you’ll just have to do it all again tomorrow. Shut In poetically reminds us of the hellscape we’re living in, and  even though there’s no end in sight, we might as well still brush our teeth and try again tomorrow.

Shut In had to grow on me. I spent an awful lot of time frustrated with it before I considered its original angle of conveying the emotions (or lack thereof) felt during quarantine, and that new perspective allowed me to look past the otherwise annoying issues. If you’re looking for a commentary on the effects of the pandemic on an already fragile psyche, Shut In just might be up your alley. And if you’ve read this far, why not go outside and get a breath of fresh air? No? Ah well, you can just try again tomorrow.

Editor’s note: This review is based on a copy of Shut In given to HeyPoorPlayer by the publisher.