Batbarian: Testament of the Primordials is a charming Metroidvania that’s sure to set your heart aflutter 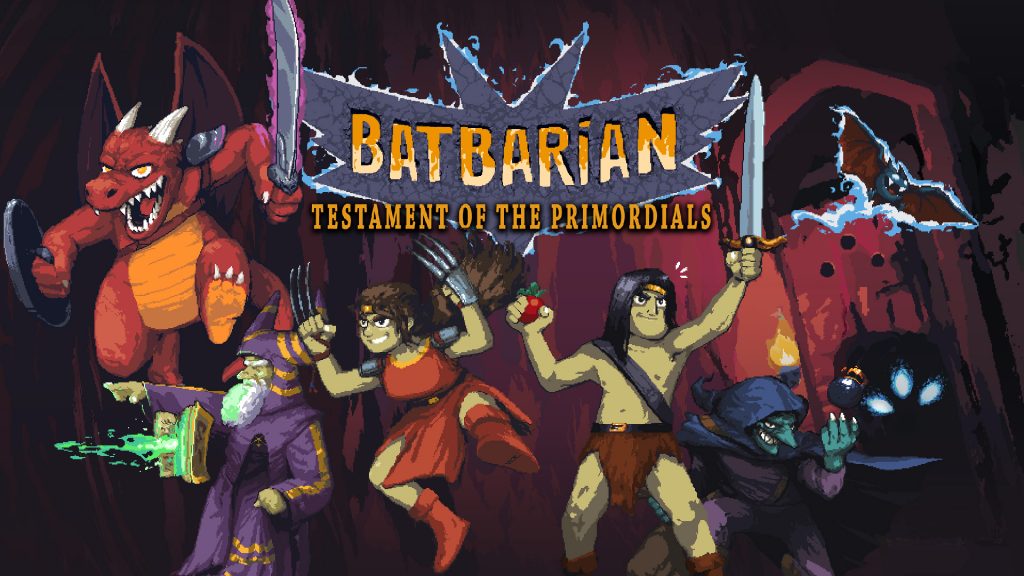 The debut offering from indie developer Unspeakable Pixels, Batbarian: Testament of the Primordials is a refreshing take on the Metroidvania genre. Fittingly enough, the game tells the story of a bat and a barbarian as they explore the depths of a dank dungeon teeming with strange monsters, perilous puzzles, and more self-referential humor than you can shake a broadsword at.

If you’ve played a Metroidvania game before, this all probably sounds par for the course. However, what sets Batbarian apart from its contemporaries is its reliance on your winged companion to help you solve puzzles and overcome the obstacles you encounter. You see, Pip isn’t your typical flying rat. She’s imbued magical powers that give her a glowing aura. Considering the game takes place deep underground where sources of light are a rare commodity, often, the energy radiating from her is the only thing that keeps you from being…well…blind as a bat. But that’s just the tip of the wing when it comes to what she Pip can do.

Let There Be Light 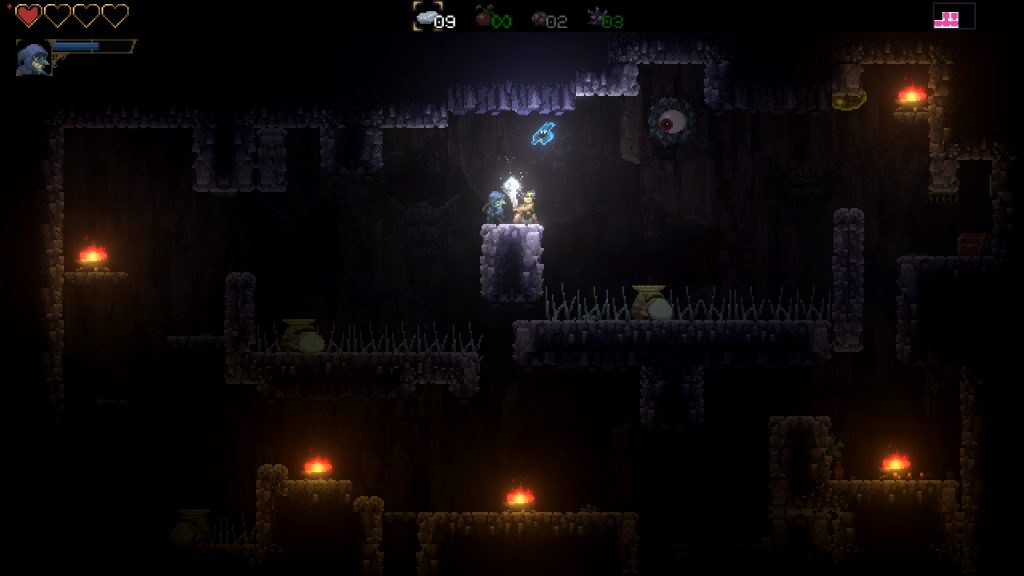 Pip’s omnipresent glow is often your only source of light in the dungeon’s dark depths.

Pip isn’t just useful for helping you see your surroundings and helping you spot the dungeon’s various deathtraps before you stumble into them. You can also use her light to activate ancient mechanisms or manipulate particular creatures to help you solve puzzles. With that in mind, you’ll have to use Pip in creative ways to overcome the obstacles you face as you explore the sprawling subterranean world.

Pip doesn’t work for free, however. She’s a food-motivated companion. As you make your way through the depths of the abyss, you’ll find various types of fruit that you can use to get Pip to perform different actions. For example, your standard fruit is unlimited, and throwing it will cause Pip to move in that direction then return to you. Another type of fruit functions the same but takes longer to eat before she makes her return flight to your side. Lastly, the sticky fruit enrages Pip and will cause her to bash anything that it lands on into oblivion, be it rocks that bar your progress or enemies whose stone skin is impervious to your blades. Unlike the standard fruit, the latter two types are hard to come by. With this in mind, smart resource management is a must if you want to make it far in the dungeon.

This reliance on teamwork between a barbarian and his (or her) bat is hugely satisfying and easily one Batbarian: Testament of the Primordials’ greatest strengths. It does a spectacular job of making the game feel fresh in an exceptionally crowded genre.

A Thrilling Take On A Time-Tested Formula 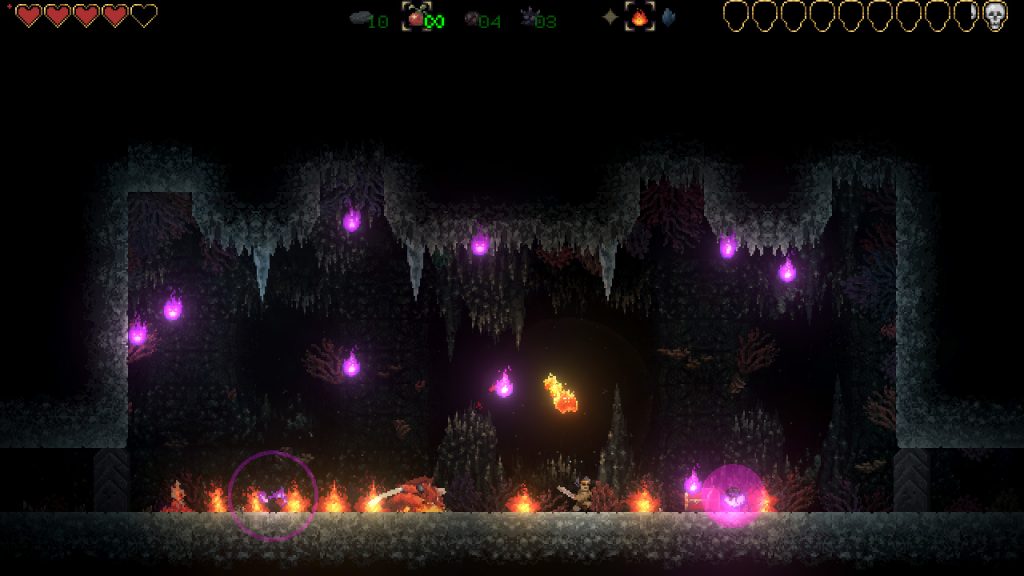 Boss battles are always a sight to behold.

Bat-borne antics aside, delving into the depths of the dungeon in Batbarian: Testament of the Primordials will feel very familiar to Metroidvania fans. The basic beat of slaying monsters, gaining abilities which allow you to reach previously inaccessible areas, and battling challenging, screen-filling bosses, is alive and well here. Speaking of bosses, they can be quite tricky to defeat and always require you to use Pip in some way to overcome their defenses. I liked this quite a bit. However, I found it occasionally cumbersome, taking my thumb off away from the action buttons to lob fruit using the right stick in the heat of the action.

One feature I enjoyed was the way the game handles leveling up your character. When you gain a level, it triggers a little slot machine minigame. You get three spins, and depending on if the wheel stops on a sword, shield, or eye, it will upgrade your attack, defense, or awareness stats accordingly. I found this to be a fun, albeit unconventional approach to character progression, which, like the bat mechanics, does just enough to make Batbarian: Testament of the Primordials feel fresh.

The game’s story is ultimately forgettable, serving mainly as an excuse to set you off on your adventure. However, the writing itself is hilarious, keeping its tongue planted firmly in cheek with tons of quirky humor that would have felt right at home in one of Lucasarts’ Monkey Island games from the SCUMM era. Now, if that’s not high praise, then I don’t know what is. 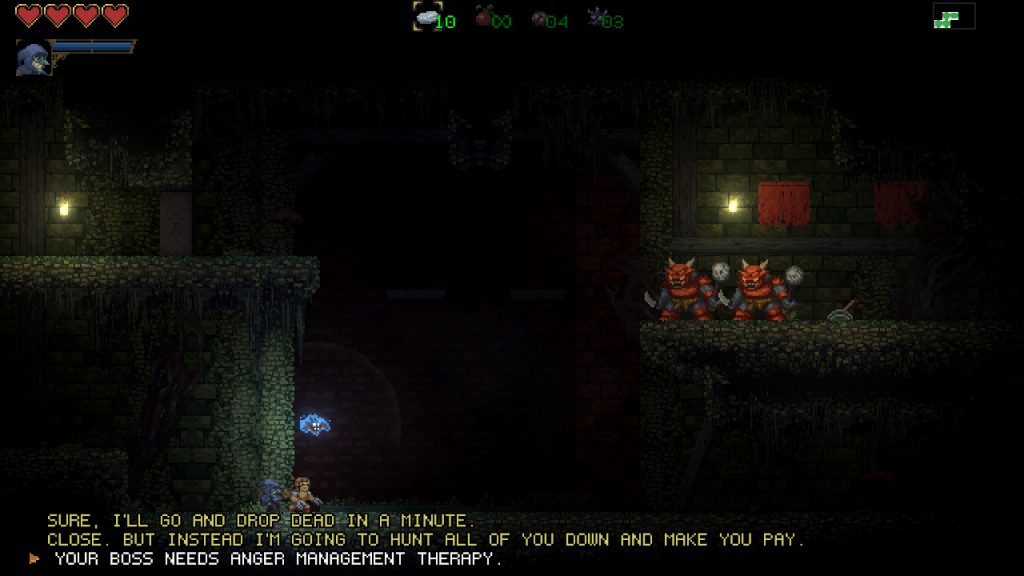 All told, I loved the time I spent with Batbarian: Testament of the Primordials. From the moment you fire it up, you can tell it was a labor of love for developer Unspeakable Pixels. From the lushly drawn environments and detailed character sprites to the phenomenally atmospheric music that brings the game’s world to life, it’s a hell of an experience and easily one of my favorite indie games of 2020. But that’s not to say it’s perfect.

For starters, the game’s controls are quite twitchy. It can be hard to position yourself exactly where you want to be without falling off whatever platform you’re on and can become incredibly frustrating when you happen to fall into a pit that takes you back a half dozen rooms or so. And to make matters worse, your diminutive hero tends to drop from the apex of his jump as if he were a lead balloon. With lots of precision platforming peppered across each area, it can be a bit difficult to come to grips with the way the controls handle at first. Still, with a bit of practice, I came to grips with things. But there was undoubtedly a learning curve before I got to that point.

In addition to these control quirks, the game also suffers from some performance issues when it gets hectic. The action tends to chug the most during boss encounters when lots of enemies and effects appear all at once. These bouts of slowdown never get so bad that the game becomes unplayable, mind you. But they did throw me off my rhythm occasionally, which can be somewhat frustrating.

Minor control and performance quibbles aside, you don’t need a keen sense of echolocation to see that Batbarian: Testament of the Primordials is an exceptional addition to the Switch library. With killer presentation, an exciting world to explore, and a unique approach to its puzzle-solving mechanics, it’s a must-have for any fan of the Metroidvania genre. If you’re even remotely interested in these types of games, I can’t recommend picking this one up enough. One thing’s for sure: I can’t wait to see what developer Unspeakable Pixels comes up with next.

Editor’s note: A review copy of Batbarian: Testament of the Primordials was given to Hey Poor Player by the publisher.