Where in the world is our next case? 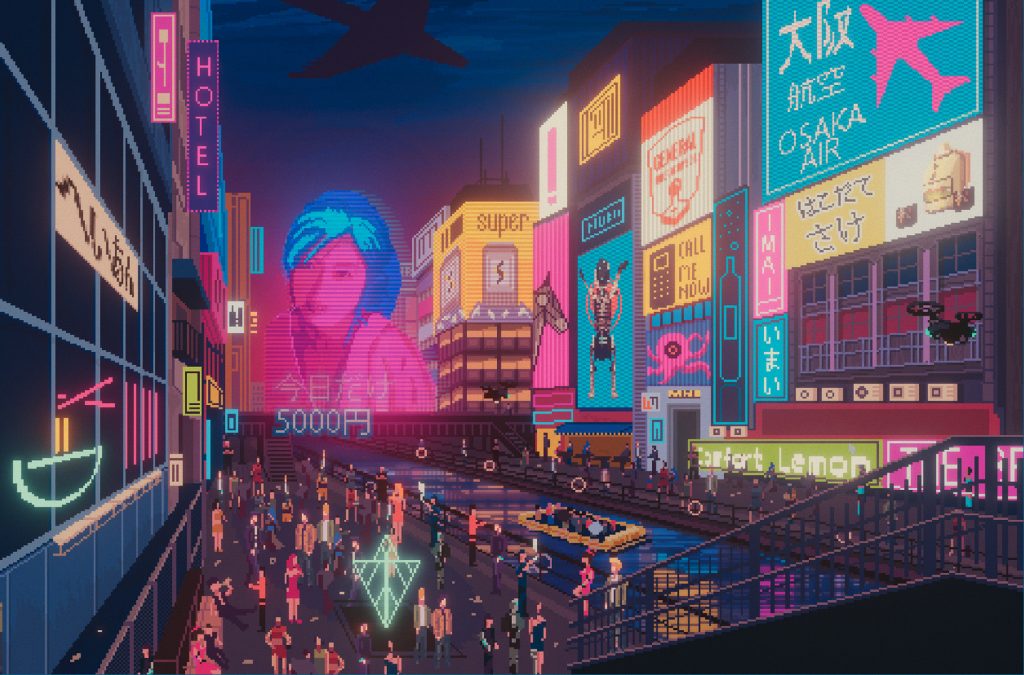 Born at the tail end of the ’80s, I don’t have a lot of concrete memories when it comes to my earliest gaming years. My favorite games at 2 years old were Civilization, Mixed-Up Mother Goose, and Where in the World is Carmen Sandiego, although I could seriously only play one of those with my non-existent reading skills (I’ll let you guess which one). Still, it was fun to play those perfectly pixelated masterpieces back in the day, the latter allowing me to traipse around the world following the smallest possible whiff of a clue in the hopes of catching up to that mysterious woman in red.

It’s that experience Chinatown Detective Agency: Day One tries to emulate, and I daresay it’s not only a love letter to a beloved classic but surprisingly improves upon its greatness for an ultra-satisfying achievement in ludonarrative harmony. 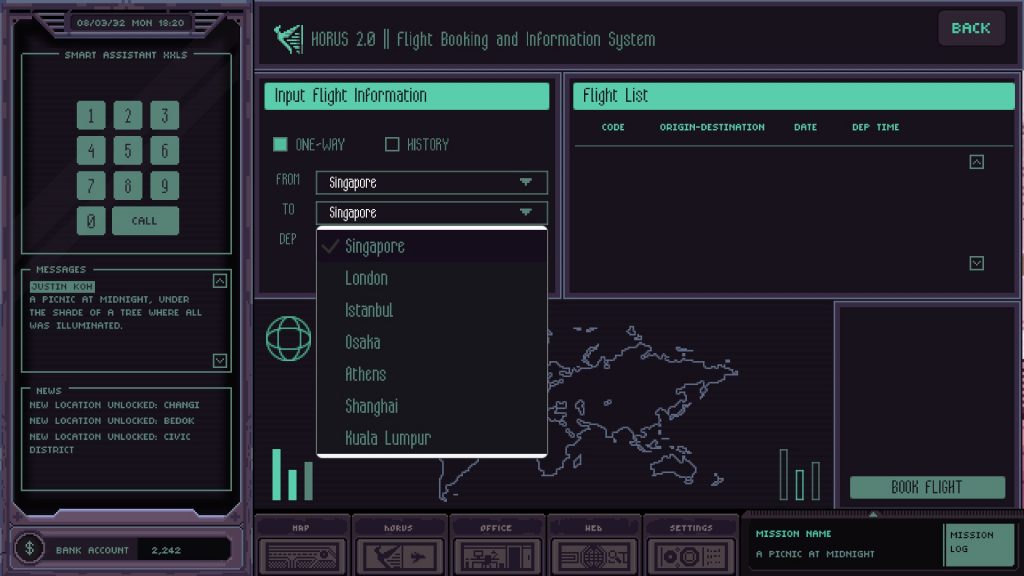 Currently in development by Singaporean dev team General Interactive Co., Chinatown Detective Agency: Day One is a bite-sized prologue of the full version still being fleshed out, offering eager gumshoes a taste of what’s yet to come. Free on Steam, Chinatown Detective Agency: Day One gets players used to familiar mechanics with a fresh twist that retro gaming fans will immediately recognize and newcomers will instantly love. Seriously, if you have an hour or two to kill and want something both deep and casual, you really should just go check it out (but feel free to stick around for a few hundred more words where I gush about this title).

Chinatown Detective Agency: Day One is set in Singapore in the year 2032. The future is bleak, but it looks like Singapore is holding on better than other countries… for now. Those with the means can afford justice, and the strong arm of that virtue has caught the entrepreneurial spirit. Amira Darma is one of those bringers of said justice, a P.I. who just opened up shop in a small 2nd floor office on Eu Tong Sen Street. Appropriately named Chinatown Detective Agency, she’s ready to take on any case — big or small — to make a living in this neon-lit world. 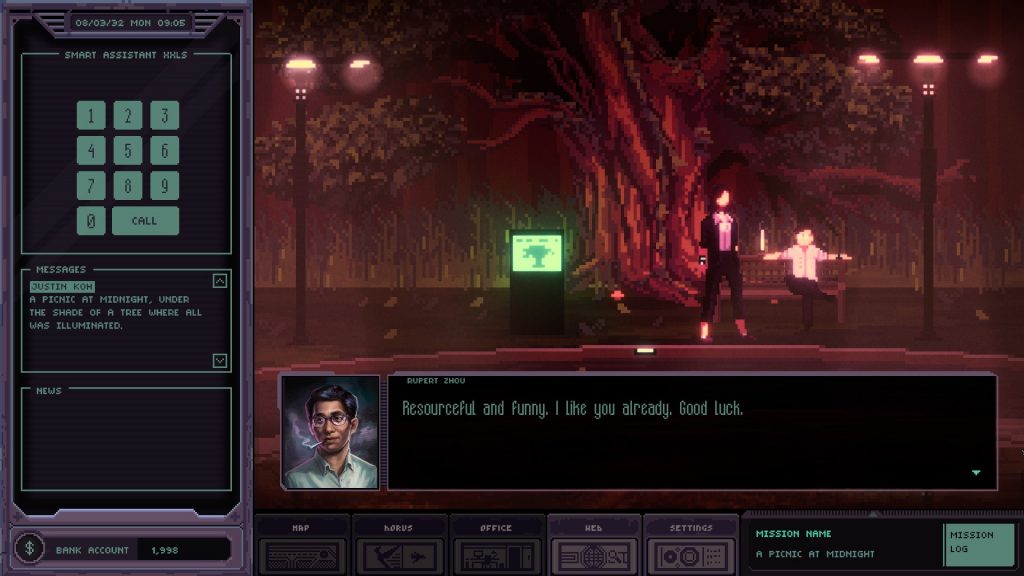 This point-and-click pixel art detective game emulates Where in the World is Carmen Sandiego most obviously in the UI and layout — to the left of the screen is a phone with the option to call, check messages, keep up with news, and mind your bank account. The bottom of the screen has buttons that players will use to move and progress, like checking out the transit map, buying airplane tickets, heading back to the office, surf the web (the actual web), and pull up game settings. Another tab at the bottom keeps track of all mission objectives, including evidences, persons of interest, and dialogue. A nice hub that has one foot firmly in the past while being refreshed for the current era.

Chinatown Detective Agency: Day One’s aesthetics are divine. I’m such a sucker for a pixel art game, and with the synthwave backdrop it all works seamlessly. The colors are dark and moody, and the little details woven throughout treat players to a futuristic world crumbling into decay. The music is energizing and interesting while remaining unobtrusive during parts where the player needs to think, which is a critically important facet of puzzle game music. It’s an open/shut case: Chinatown Detective Agency: Day One looks, sounds, and feels good. 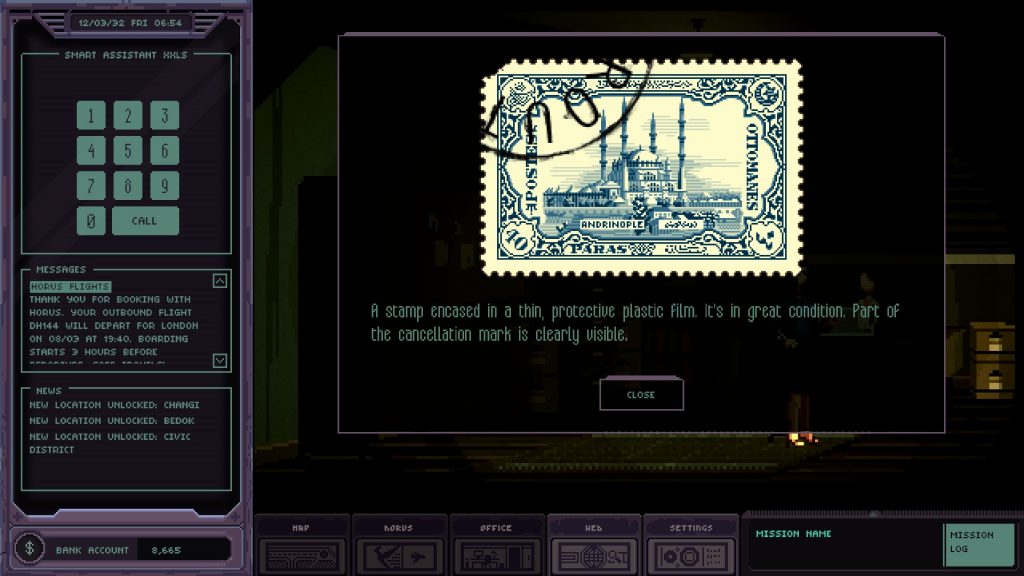 There are two mechanics Chinatown Detective Agency: Day One implements that are worth discussing, the first being the web aspect. There will be cases that require the player to do some real-world research, and clicking on the “web” button pulls up a browser that players will need to use. An example is the stamp case, where players will need to discern not only the stamp’s country of origin but the city, using the stamp’s imagery and letters as a lead. I spent a good chunk of time scouring Wikipedia to learn about the Adrianople and its history, which is exactly what Amira would be doing once she got hold of the stamps herself. This is a fantastic example of ludonarrative harmony — one of the few, in fact — that blends mechanics and story perfectly.

The second mechanic worth mentioning is the endurance aspect of Chinatown Detective Agency: Day One. As time moves forward, Amira will become tired, her endurance bar depleted. In order to fill up her endurance bar, she’ll require food to eat. Pretty standard, right? Except her endurance bar’s length is determined by how much sleep she’s had recently. If she’s fully rested, her energy bar has the potential to reach a maximum of 100; if she’s been pulling back to back all-nighters, however, her energy bar’s potential may only hit 20, even if she’s had a full meal. The clever introduction of energy bar length in addition to fullness is not something I’ve seen before, and I find it to be extraordinarily clever both in its simplicity and evolutionary benefit to multiple genres. 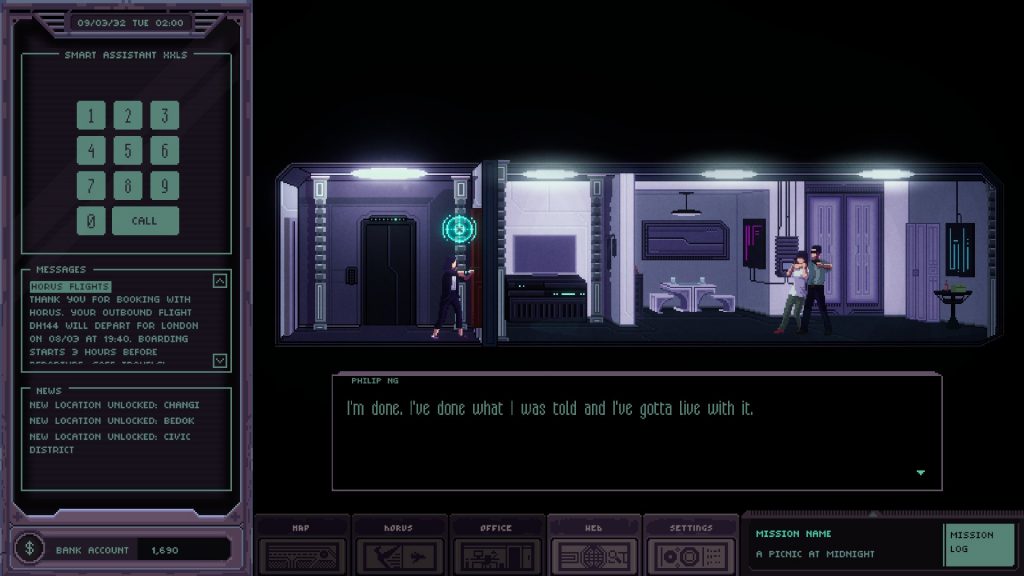 Despite all the positives Chinatown Detective Agency: Day One has to offer, there are some understandable issues. The dev team put up a big disclaimer at the beginning making players aware of the possibility of bugs, so don’t be surprised when one or two pop up. At one point I had my second client appearing in every single screen starting up the same dialogue over and over again, eventually forcing me to reload to get them to stop. They also stiffed me on their second payment, which was pretty rude, but I’m assuming that gets patched. One legitimate issue I have is the absence of that endurance bar — the game mentions it and makes it clear how important it is to keep track of Amira’s endurance, but I couldn’t find out where to monitor that. The endurance bar never appeared. I’m assuming I just have to guess? Here’s to hoping the full game shows the endurance bar, as it really is a cool mechanic I’d love to be able to visualize.

Still, Chinatown Detective Agency: Day One has an incredible amount of gameplay to offer in its three short cases. Those interested in the retro aspects of the game are going to be absolutely delighted, and players hoping for a scintillating detective story will get plenty of play value out of this pixel art prologue. Chinatown Detective Agency: Day One is a free taste of what’s yet to come, so sleuth your way over to Steam for the prologue and then add the full title to your wishlist to get it when it drops in 2021.

Be sure to check out Chinatown Detective Agency: Day One on Steam today!