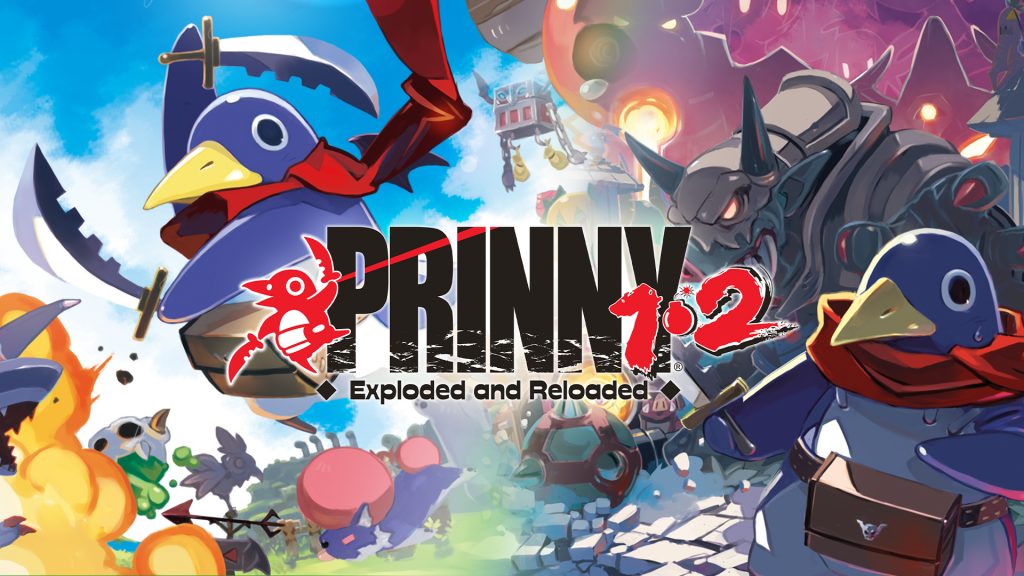 Prinny 1•2: Exploded and Reloaded is the most inherently polarizing platformer that I’ve had the pleasure(?) of playing since Cuphead. It’s purposefully difficult, has an insanely high learning curve, and seems to love nothing more than making players go through the same section of the game over, and over, and over, again. Prinny isn’t Cuphead, though. I actually liked Cuphead. And, while I wouldn’t go so far as to say that I intensely disliked this game, I can’t say that I like it, either—a statement that I take no joy in, considering how much I love the Disgaea series overall.

The reason I called Prinny polarizing is that I know that there are people out there who like this style of platformer, and, more specifically, the two games that make up this one. I have no problem if you’re one of those people. In fact, I’d say more power to you. However, I also know that there are plenty who won’t, and even a subset of players who are going to go completely bonkers trying to beat this. It’s an intrinsically difficult platformer, but not in a particularly good way. Rather than legitimately challenging players, it seems content to toy with them—and it’s because of this decision to “be hard for the sake of being hard,” that I just can’t praise it like I wanted to.

A Prinny’s Work is Never Done

Messing with Etna’s stuff is literally one of the worst ideas that you could think of, dood.

I’m sure that you’ve gathered what I’m about to say based on the game’s title alone, but Prinny 1•2: Exploded and Reloaded isn’t technically a “new game” in the traditional sense, but a 2-in-1 comprised of Prinny: Can I Really Be the Hero? and Prinny 2: Dawn of Operation Panties, Dood! (yes, that’s really its name), both of which debuted on the PSP. However, despite being two different games, their stories aren’t really that different from one another.

Regardless of which individual game you’re looking at, the Prinny stories basically boil down to one thing: someone stole something from Etna—a dessert in 1, and a pair of her panties in 2—resulting in her blowing a gasket and sending a horde of 1,000 Prinnies to reclaim her stolen goods. To stop them from exploding when they’re jumping around, she creates a special, protective scarf. Unfortunately, she can only create one (or maybe she only wanted to), resulting in her army conducting the search one dood at a time. Neither Prinny game has a story that’s particularly lengthy or engaging, most likely because they’re platformers and not RPGs. However, it’s still worth mentioning that the traditional Disgaea-esque charm is visible, strong, and sure to get plenty of smiles out of series fans.

Day or Night, Rain or Shine 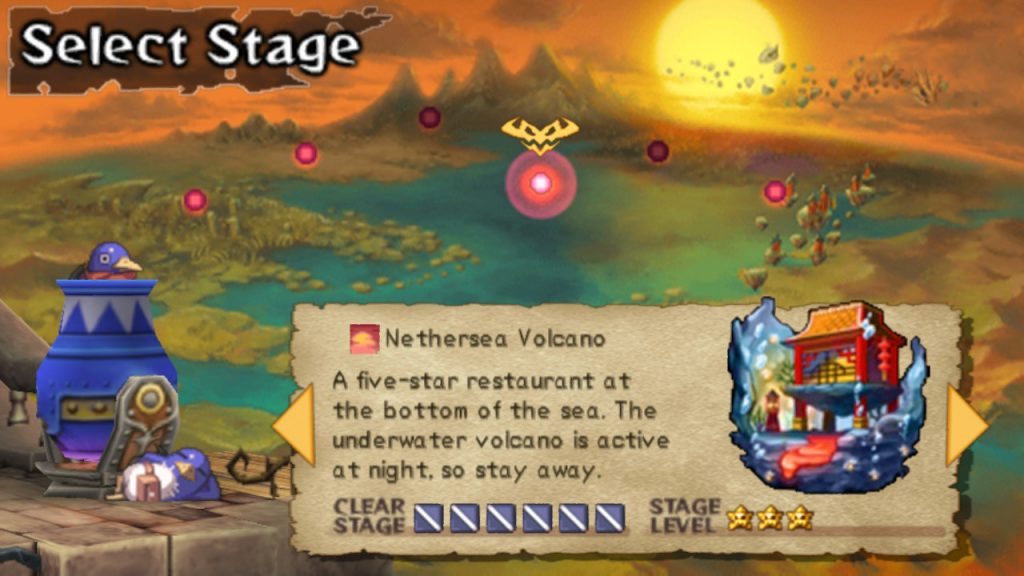 Don’t save the hardest levels for last! They only get harder!

Fundamentally, both of Prinny‘s titles function identically, and, when it comes to level selection, both are brilliant. Following in the footsteps of classic titles like Mega Man, Prinny allows players to tackle each of its six levels in any order they desire. Unlike said classic titles, however, Prinny‘s level selection comes with a twist. Because the Prinnies are operating on a very limited time budget, each level you complete progresses the day, starting things out when it’s bright and sunny, and ending things in the dead of night. But the time of the day isn’t simply an aesthetic change. However, no two periods of time are the same for any of the levels, and, generally speaking, the later in the day, the harder the stage. This, then, turns Prinny‘s initial six stages into a whopping thirty-six.

As many problems as I have with these games, I love their approach to level-building. Not only does modifying each level make the game six times bigger than it seems, but it also creates an incentive to play through the story multiple times since you can only play one version of each level per run. I’ve seen my share of platformers that make changes to levels here and there, but Prinny is in a class all of its own when it comes to level customization.

The Woes of Being a Weakling 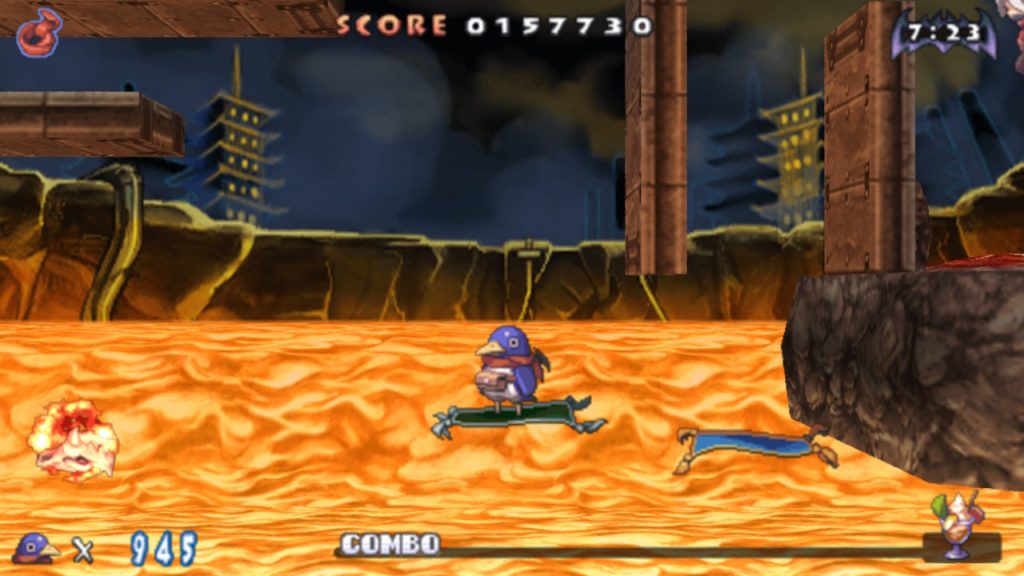 This carpet ride is anything but magic, I promise.

Prinny’s approach to getting as much bang for its HL from its levels is great. Actually playing through the levels, however, is not. For the most part, the levels themselves aren’t all that bad. There are a few tricky parts here and there, but it would be very manageable overall if the games utilized even the most standard of platforming mechanics. But they do not. Prinny does give some players a modicum of versatility; you can double jump, ground pound, execute ground combos, and can even utilize the oh-so-famous Prinny Barrage (a mid-air attack that lets you throw daggers at a downward angle) whenever you’d like. But all of that is overshadowed by one thing; fixed jumping.

It isn’t often that I find myself saying that I hate things in reviews, but I won’t pull any punches on this one; I hate fixed jumping. There are plenty of things that you can do to make a platformer both unique and challenging, and, among the said myriad of choices, fixed jumping is one of the worst ones ever. For those who aren’t sure what I’m talking about, fixed jumping means that, once you jump, you’re locked in that direction. Sure, the game sort of lets you correct this by allowing you to ground-pound (which you’ll be doing a lot), but that still doesn’t excuse the fact that this horrid mechanic is in this game in the first place. It makes everything feel so lazy. I stated that I liked Cuphead earlier in this review, and my reason why is simple; it’s an incredibly precise and fluid platformer that challenges players in a brutal, but (arguably) fair way. You get a little better each time you play because you can micromanage your own techniques. There is no such micromanaging in Prinny. 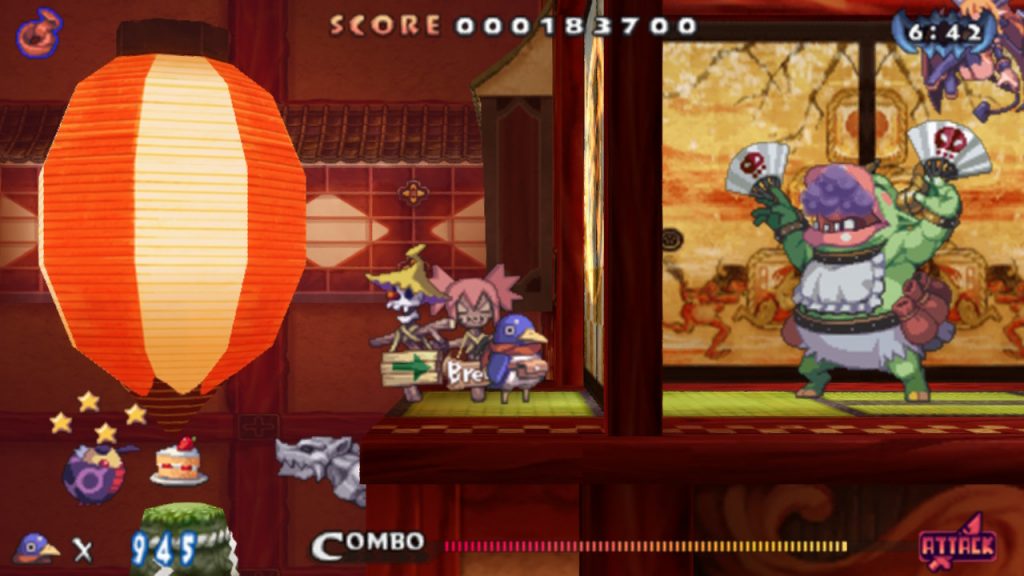 I don’t remember the last time playing through a level drained me as much as this one did.

As much as I hate not having fluid jumping mechanics in a platformer, it’s not enough to turn me off entirely from a game. I even occasionally end up liking games that feature stuffy jumping mechanics from time to time (La Mulana comes to mind in particular). You can limit a player’s jumping ability and still make a game challenging in a natural and fun way. Instead of doing that, however, Prinny pulls the equivalent of consistently sucker-punching the player. To be fair, things are honestly fine during the first few levels. However, once you knock out a few stages and the sun starts setting, all bets are off.

Prinny has a knack for placing enemies in the most inopportune places. As a fan of Mega Man, this kind of thing isn’t something that throws me off entirely. However, the rate at which both of these games did it certainly did. There’s a point where that kind of thing stops being fun and starts feeling unfair. Making levels with sections that feel more luck-based than skill-based is a line that no platformer should cross, yet it’s one that Prinny uses its stubby wooden legs to hop over time and time again. I don’t remember the last time I had a harder time with normal enemies than bosses (which are actually pretty fun), but I certainly did with this game.

Game Over, Dood, Game Over!

Prinny 1•2: Exploded and Reloaded is not my cup of tea, which is sad given how much I wanted to enjoy it. I always appreciate a challenging platformer when said challenge is approached in a fair manner. Still, there’s no getting past the fact that both of these penguin-packed platformers thrive on doing little more than punishing the player without giving them much notice. I know that there’s a fanbase for these kinds of games, and if you’re among them, then this is right up your alley. However, for those who don’t want to become a punching bag for the game that you’re playing, you should look elsewhere.

Full disclosure: This review is based on a copy of Prinny 1•2: Exploded and Reloaded given to Hey Poor Player by the publisher.

I’ve only got eyes for µ Having freshly wrapped up Persona 5 after investing over a hundred hours into the game last month, I’ve felt my love for the JRPG…