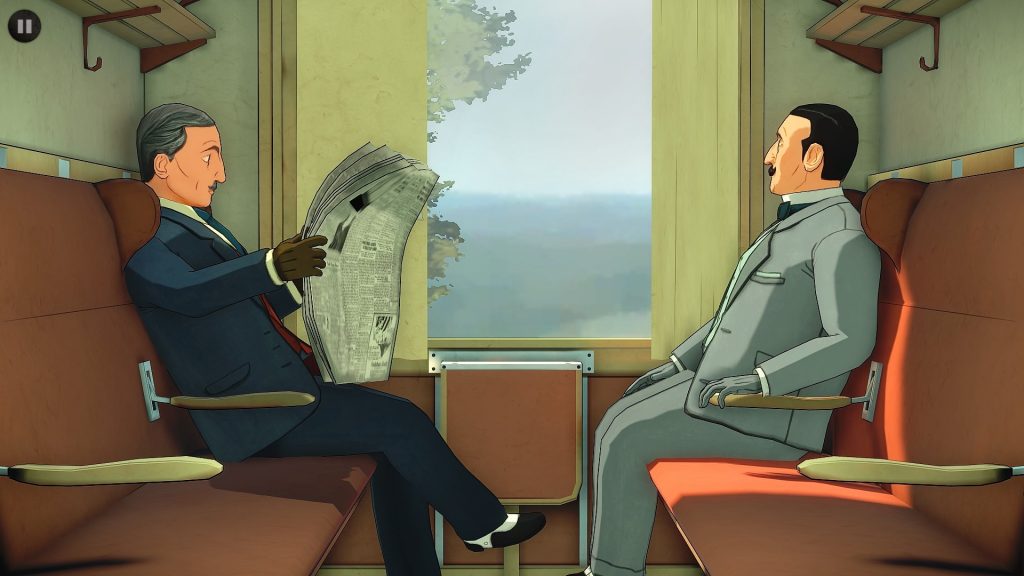 There’s something to be said about a classic murder mystery, and the name best associated with that genre could be none other than Agatha Christie. Outsold only by William Shakespeare, Christie is the best-selling novelist of all time with total sales estimates ranging from 2 – 4 billion (yes, billion) copies sold — and Shakespeare had quite the head-start! With scintillating stories and captivating characters — most famously known being Miss Marple and Hercule Poirot — Christie made an unassuming yet massive imprint on the entire genre, tales based on her own churned out for decades afterwards.

It’s one of Poirot’s tales that caught the eye of dev team Artefacts Studio and publisher Microids, who came together to gameify one of Agatha Christie’s greatest hits, The A.B.C. Murders, first published in 1936. In 2016 — exactly 80 years later — they released Agatha Christie – The ABC Murders on Steam where it enjoyed positive reviews. After four years of success, Agatha Christie – The ABC Murders makes its way to the Nintendo Switch for an entirely new set of players to enjoy a riveting story of murder and mystery. 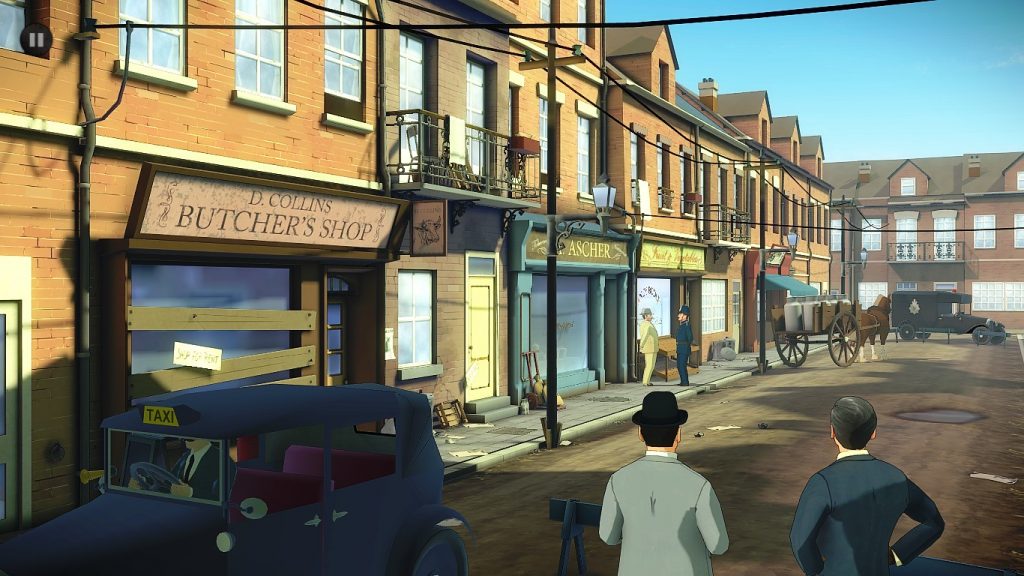 For those unfamiliar with this particular novel, Agatha Christie – The ABC Murders follows famous detective Poirot and his assistant, Arthur Hastings, who are invited to investigate a murder case. Standard day in the life of this duo, right? Except here’s the odd part: the letter came from the murderer, and he hasn’t actually committed the murder yet. Armed only with a date and a location on where the dirty deed will occur, Poirot and Hastings immediately notify Scotland Yard and do the only thing they can do: wait.

The day comes, and a murder has indeed transpired. Poirot and the team investigate, but come back with few leads — sure, those closest to the victim seem suspect enough, but something about the case is too perfect, too simple, to wrap up just yet. That gut feeling would prove correct, as more letters announcing more murders keep coming through the post to Poirot. Our dear detective begins to notice a pattern: all the murders are alliterative, as A. Ascher of Andover was the first victim, and Betty Barnard of Bexhill was the next. Will this pattern help Poirot solve the mystery, or will they reach the end of the alphabet before finding the killer? 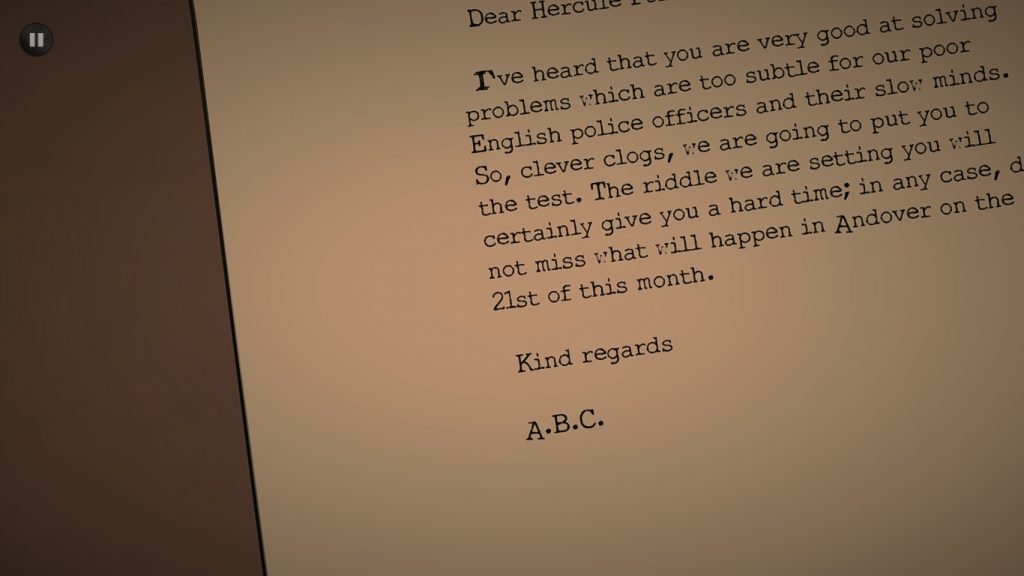 Agatha Christie – The ABC Murders features various mechanics, but it’s ultimately more of a point and click with puzzle-solving elements akin to The Room. Players will control Poirot as he investigates crime scenes, interrogates witnesses, and solves puzzles all over the South of England. These mechanics are woven through the nail-biting narrative, providing for an interesting, interactive whodunit.

The controls for the Switch version of Agatha Christie – The ABC Murders are workable, but these sorts of games tend to be more intuitive (or at least less frustrating) with a mouse. I think the buttons assigned to specific tasks made sense, like ZL was used to manipulate items and the d-pad brought up a task bar where you can check current tasks and whatnot, but just know that if you’ve never played point and clicks on a console before, be prepared to consistently do the opposite of what you meant to do. I would accidentally exit out of certain menus all the time, especially if I had taken a break from the game. If this isn’t your first rodeo with console point and clicks, then you might find the experience less frustrating than I did. 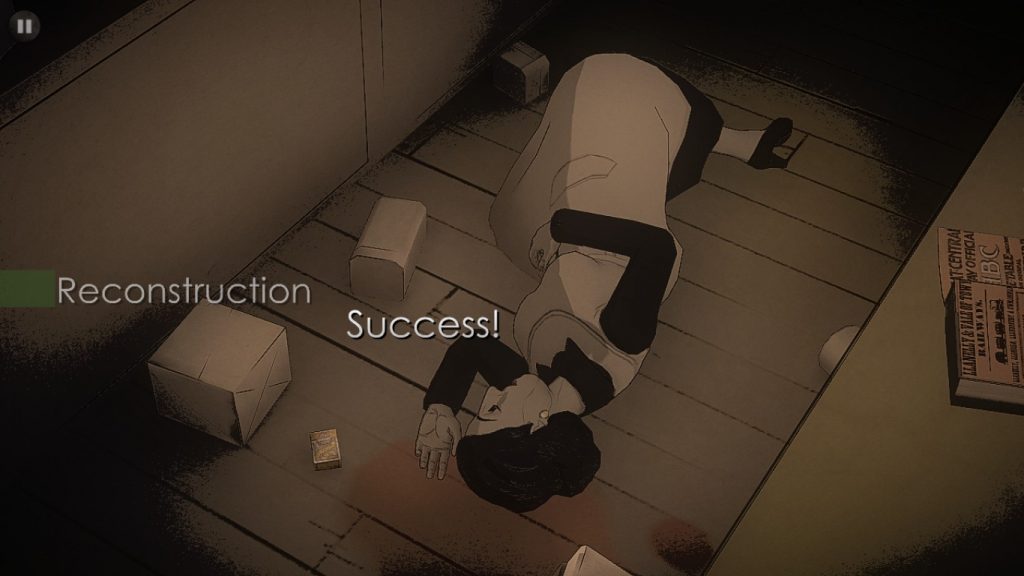 Controls aside, there’s a lot to love about Agatha Christie – The ABC Murders. For one, it’s nice to have a classic murder mystery to play — one that doesn’t get too dark but still provides plenty of intrigue. I was convinced I knew who the murderer was early on, even making the correct connections between victims by the second murder, but the ending was anything but predictable. Dwight Schrute’s words rang true in this case: it’s the person you medium suspect. I also really liked how they handled puzzles, hiding clues in convoluted contraptions that doubled as inconspicuous furniture. Then again, I’m a big fan of The Room series, and if you are as well, you’re in for a treat. I think one clever thing I hadn’t seen before was the “little grey cells” aspect, where you have to answer questions by connecting evidence together. Unlike Phoenix Wright (my eternal fave), which has both the characters and players stumbling into the right answer with half an understanding behind it, Agatha Christie – The ABC Murders sort of “tests” players by forcing them to foster connections between pieces of evidence, which I found interesting.

When it comes to aesthetics, I’m definitely a big fan of what Agatha Christie – The ABC Murders brings to the table. Set in the 1930s, the Art Deco elements were present but did not overwhelm the lovely post Edwardian era style. While the eyes on a few characters were a tad bit creepy, I liked the animation overall, finding it to be fairly different than the standard fare. The soundtrack was tense where required and unobtrusive during puzzles, which, as any puzzle enthusiast will agree, is critically important when trying to concentrate. I think my favorite part, however, was the attention to detail regarding mirrors — Poirot’s personality would shine through each time he passed by one, fixing is perfectly-coiffed hair, and quizzing suspects near one would mean you’d see what it reflected, which I really enjoyed. 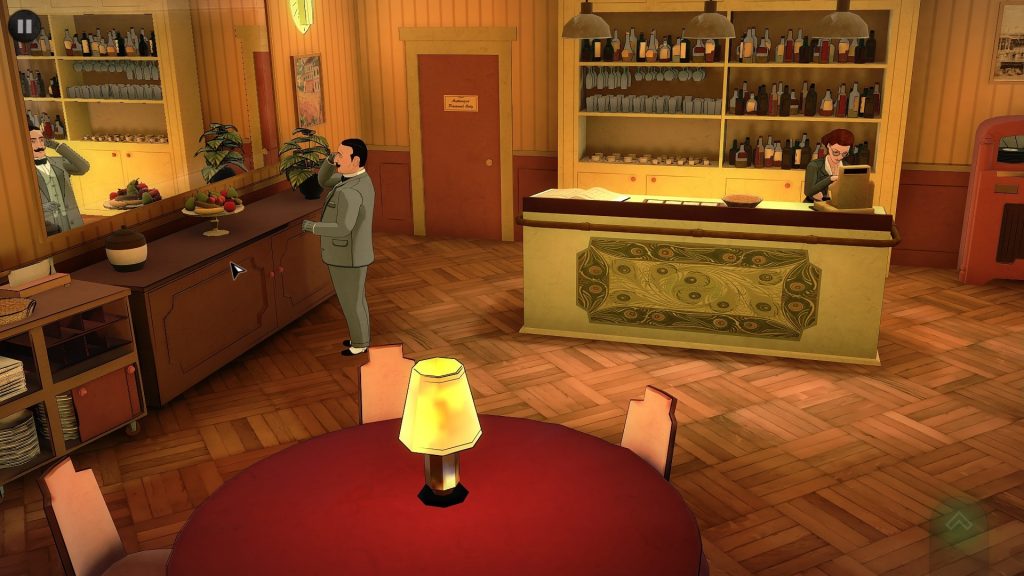 Unfortunately, I admit the game wasn’t smooth sailing at all times — there were a few observation instances where I’d be missing a clue, and at one point a puzzle wouldn’t show a workable angle no matter how hard I tried to cheese it. Luckily I could solve that with the assistance of some online videos, but yeah, the music box puzzle is definitely bugged. Additionally, I found the inclusion of Poirot’s ego points a bit odd, as it was never really clear what I could do with them, and with 50 in-game trophies (in-game, as the console doesn’t feature them), it was hard to do anything without getting a notification for yet another trophy, but aside from the lack of general applications for such achievements I’m not entirely sure that’s a negative. Just odd is all.

Despite the negatives, I’d say Agatha Christie – The ABC Murders is more of a positive experience than anything. I’m really happy I played it, although I’m surprised I played the Nintendo Switch version before my already owned Steam version. And while I admit that, if it interests you, it’s better to play the game than not at all, but I’d be hard pressed to recommend the Switch version over the Steam version. To the team’s credit, they handled the point and click mechanics very well, but the title is considerably cheaper on PC at the time of this writing and a mouse is objectively better suited for the genre. Still — if you don’t have a PC, go ahead and grab this title, as it really is a great story that has a ton of personality and charm.

If you’re a fan of Agatha Christie, murder mysteries, point and clicks, or puzzle games and want a fun little gem that will provide a day’s worth of amusement without trespassing into darker territory, then Agatha Christie – The ABC Murders will definitely delight you. Christie’s beloved detective duo graces the Nintendo Switch on October 6, 2020, and it’s up to players like you to help them solve puzzles, interrogate suspects, and find that notorious A.B.C. murderer. We’ve already deduced that you’ll have a great time with this title, so be sure to check out Agatha Christie – The ABC Murders for Nintendo Switch without delay!

Editor’s note: This review is based on a copy of Agatha Christie – The ABC Murders given to HeyPoorPlayer by the publisher.