It’s all about bass-ic survival. 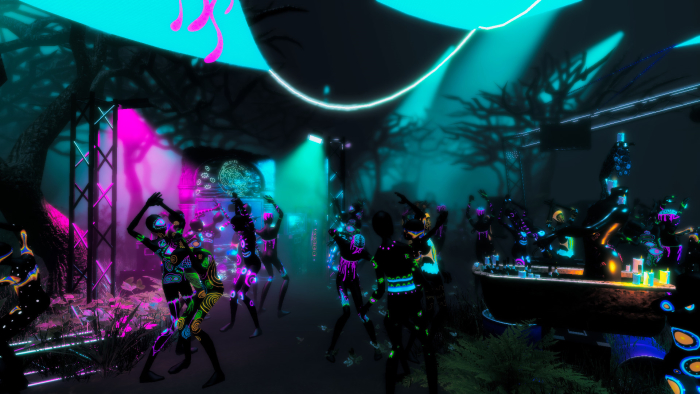 It’s not very often that EDM aesthetics feature in video games. As somebody who grew up on a diet of steady club beats, I find the situation to be regrettable. It’s even rarer (if not unheard of) to find EDM meshed with horror. Well, the situation is being addressed with this upcoming game called Strobophagia: Rave Horror by Swedish developer Green Tile Digital.

The game places players in the role of a young raver disillusioned with the scene and searching for the ultimate party. You come across the Headless Rave Festival, set in the middle of a creepy forest, and things seem right dandy in all their psychedelic goodness. However, it soon becomes apparent that the entire festival is an elaborate trap designed to ensnare young folks and steal their life force. You’ve got to make your way out by solving puzzles, using your smartphone cleverly, and even recruiting help from other festival-goers. Things are made more complicated by the presence of a malevolent being lurking in the forest who is hell-bent on making sure you don’t make it out alive.

Slated for a full release on the 28th of October, Strobophagia should prove to be an interesting pre-Halloween treat filled with dance, drink, and death.

Check out the trailer below to get an idea of what to expect from this ravenous rave. If you’re keen on trying out a demo, you can find it on the game’s official Steam page here. If you’ve tried it, let us know what you think in the comments section!