As Strong as Ever 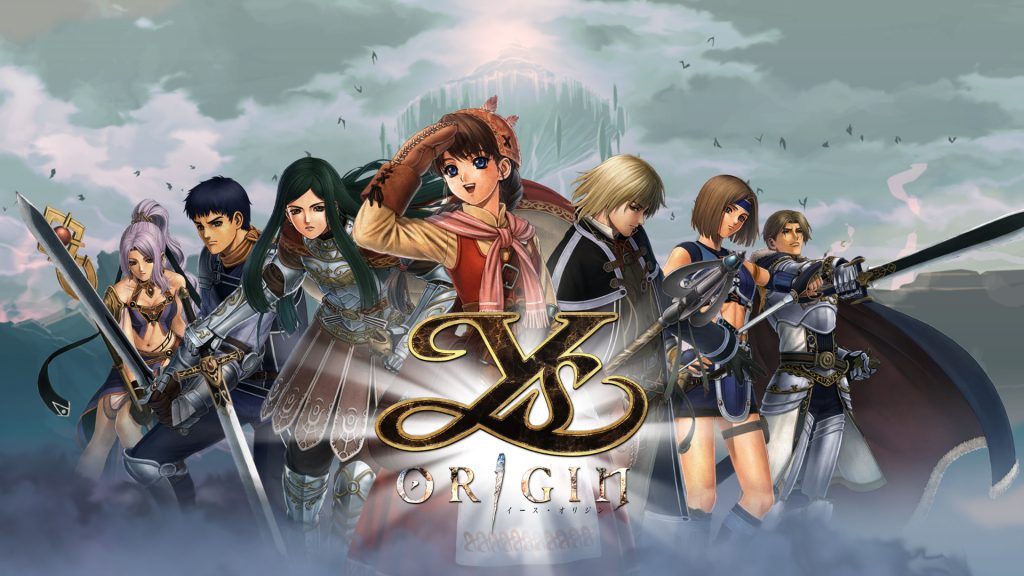 It isn’t often that I find myself calling a video game “refreshing.” A word like that is reserved more for something like a cold glass of water, crisp mountain air, or avoiding your responsibilities by staying in bed all day. Using that same word to describe a game is kind of strange. And yet, it was still the first word that came to mind when I started my journey through Ys Origin.

Bizzare as it might still be to call a game refreshing, I don’t think my logic behind it is. Ys Origin has a lot of things that I find missing in many modern RPGs, all bundled together within a single game; whether it was the simple-yet-challenging combat, the nostalgic contrast between 2D and 3D, or the fact that it managed to contain the entire game within one location, the more I played, the more I ended up appreciating everything that this game had. Games like this need to be kept alive, and I’m glad that this one ended up making its way to the Switch. 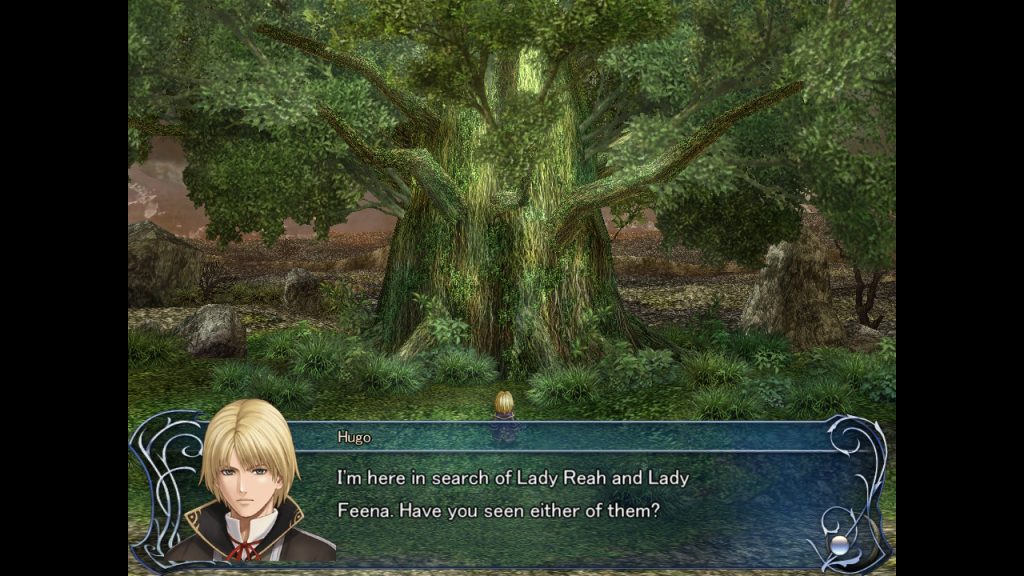 The tree he’s talking to is sentient, I promise.

Ys Origin tells a two-part tale surrounding a particularly important set of events that happened hundreds of years before any of Adol’s adventures. Along with being the namesake of the series, Ys itself is a literal paradise. Lifted up into the heavens by Goddesses Reah and Feena, Ys provided a safe haven for the last of humanity after demons began to roam the earth. Although serene for a time, the sky-bound city eventually finds itself thrown into chaos when its Goddesses disappear along with the Black Pearl—a powerful holy relic claimed to be the source of all magic within Ys. In response to this, a small search party makes their way onto the scorched surface, and, upon learning of their location, to Darm Tower in order to save the two Goddesses responsible for their own salvation.

The story of Ys Origin is, and I mean no offense, somewhat basic. It essentially serves to help progress the game along and to provide players with some backstory on the history of the Ys series itself but doesn’t go terribly far beyond that. What makes the game’s story truly interesting is the way the game’s *ahem* “two” protagonists—apprentice knight Yunica Toval and House Fact heir Hugo Fact—react to the story. Yunica and Hugo don’t explore Darm Tower together; Ys Origin requires to pick one of the “two” characters to act as the leading protagonist, with the other providing occasional plot-related support. Because of this, they largely encounter similar events throughout their journey. Their reactions to said events, however, are anything but. 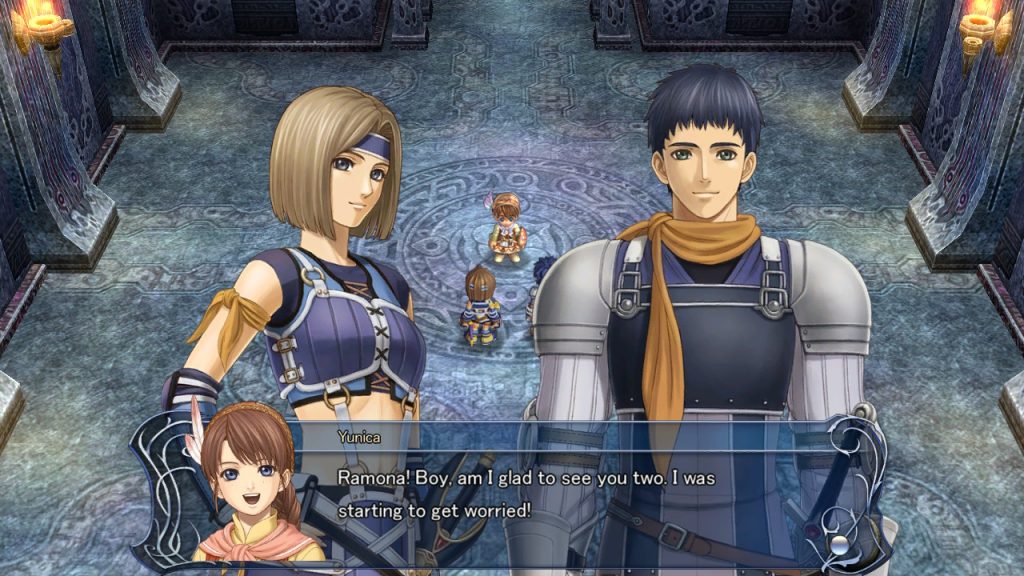 Some events play out differently based upon your chosen protagonist!

Ys Origin does a fantastic job when it comes to creating different vantage points for the same story. Yunica is the closest thing that this game has to a generic protagonist; she’s an energetic knight-in-training who, despite being entirely incapable of using magic, is eager to help and even more eager to prove herself. She jumps into situations head-first and is amazed by what’s going around her at a relatively consistent rate. She’s what we’ve all come to expect from the “budding young hero” archetype.

Hugo, on the other hand, is a smug ass (and also my favorite character). In contrast to Yunica, who learns things in tandem with and serves as a conduit for the player, Hugo seems to behave in a manner that almost purposefully mocks them; he knows what everything is before the player does, consistently taunts his foes (and friends, on occasion, too), and, for most of the game, chases power with surprising effectiveness. To put it simply, Yunica embodies the follies of under-preparedness, Hugo embodies the follies of over-preparedness, and, together, they do an excellent job of showing alternate sides of every event within this game. Heh, who even needs a third character? Not this game, probably!

A Tower of Terror 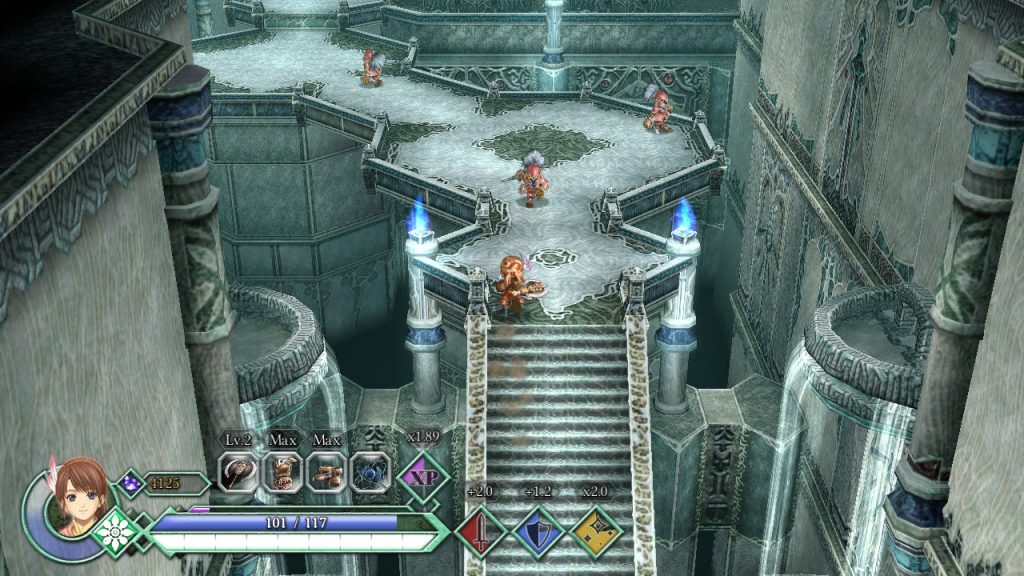 Why is this floor so wet and also crawling with demons?

Making use of a tall, spiraling tower within a JRPG is a popular choice among game developers—so popular, in fact, that the entirety of Ys Origin takes place within one. Fortunately, Darm Tower doesn’t follow “normal” JRPG tower rules. Rather than acting as a single, monolithic, dungeon, or playing out as a 3D Metroidvania (are those even a thing?), Ys Origin instead organizes the game by making its levels into, well, levels. Darm Towner is essentially segmented via the clustering of subsequent floors into “biomes,” with each biome bearing a unique theme—such as the aquatic Flooded Prison or the trap-filled Blighted Blood—mechanics—such as swimming, or slippery floors (which are in the desert area, for some reason)—and bosses.

Darm Tower is, in some ways, a little overly formulaic in how it presents itself to the players. Most unique items that you get are only useful within their immediate area (Gold and Silver Bracelets aside), there aren’t any opportunities to wander around, and the scaling of equipment and enemy levels ensures that you aren’t either too weak or too strong. That’s about the worst of it, though! And, if you ask me, none of what I’ve said is even that bad. Ys Origin may be more linear than other JRPGs, or even other Ys games, but that doesn’t make it any less fun. What the game lacks in hidden/extra rooms, it more than makes up for with the diversity of Darm Tower itself. The differences between areas go far being superficial or entirely visual (the game does look good, though!), offering challenges to the player that truly makes each area not only look different from one another but play differently from one another as well. 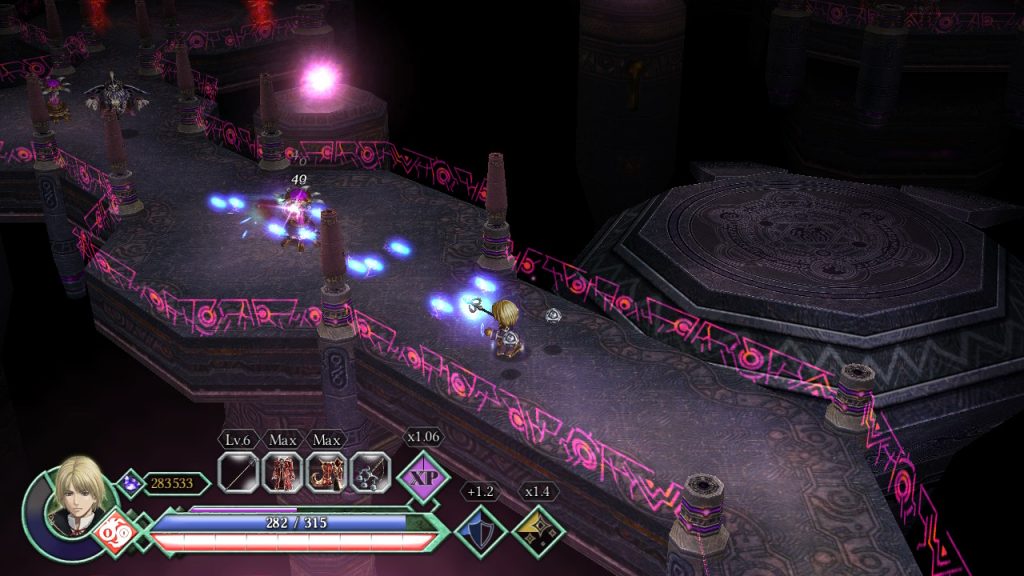 Each character has their own unique abilities, strengths, and weaknesses.

Did you know that Ys Origins is both the first in the series to have a protagonist other than Adol and the first to feature multiple playable characters? Nihon Falcom sure did (which I guess is a given), and boy did they ever make use of that! Temporarily doing away with their all-in-one swordsman poster boy, Ys Origins creates a divide between its characters in order to make each of their respective playthroughs feel unique.

Following the trend of coming off as the most protagonist-y of the bunch, axe-wielder Yunica employs a combat style that isn’t too dissimilar than that of Mr. Redhead himself. Preferring to be up close and personal, Yunica’s fighting style doesn’t leave much room for dodging but allows players to stunlock enemies with combos and render them dizzy with downward aerials in exchange. The three collectible relics in the game only enhance this further, allowing her to perform dashing and smashing attacks elemental, and even wield a different weapon. All-in-all, Yunica’s ability to set up combos is very satisfying and fun to mess around with—just be sure you don’t get hit back! 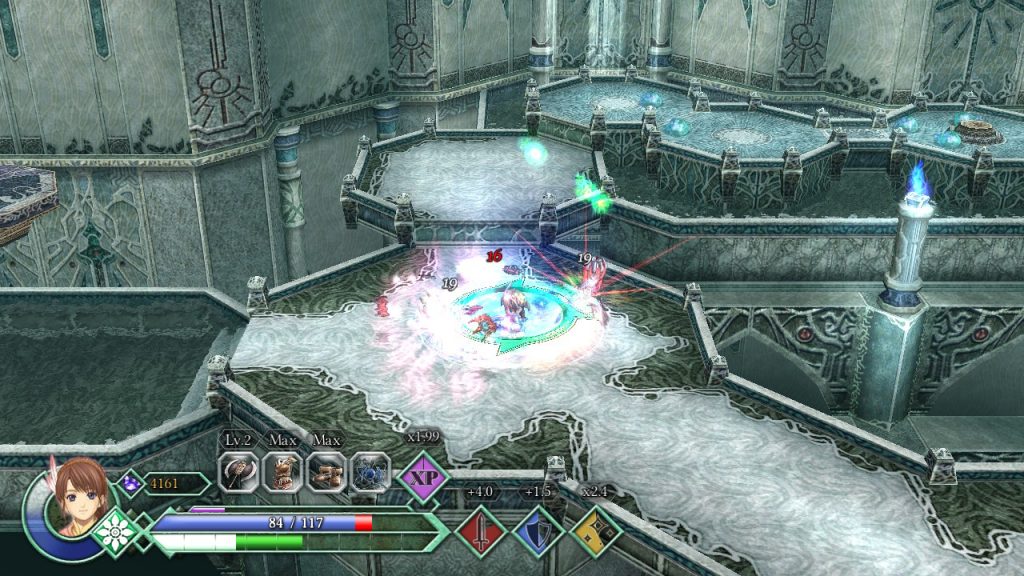 Woosh! Cuttin’ ’em down to size!

Hugo, on the other hand, is way out of the left field for a Ys character. Entirely ditching a main form of close-up combat, Hugo utilizes his wand and Eyes of Fact (the two orbs following him around) to shoot magical beams at enemies from a distance. That doesn’t mean that everything’s easier for him, though; while Hugo can apply hit-and-run tactics more easily than Yunica, his slower speed and inability to reliably stun enemies means that baddies are more mobile as well. Hugo’s relic abilities are also wonky compared to Yunica’s, allowing him to erect barriers, deploy electrically charged mines, and create a short-range, offensive attack—the only thing in his arsenal capable of stunning.

While both (initial) protags are great, Hugo’s probably got my vote of the two. It was great to see Falcom go out of their way to create such a non-traditional character, and, while he does have a learning curve, getting good enough to effectively take down enemies before they can even reach you feels great. Regardless of which of the two you choose, though, you’re going to have a good time. And if there’s a third character, they’re probably fun, too. I wouldn’t know, though. 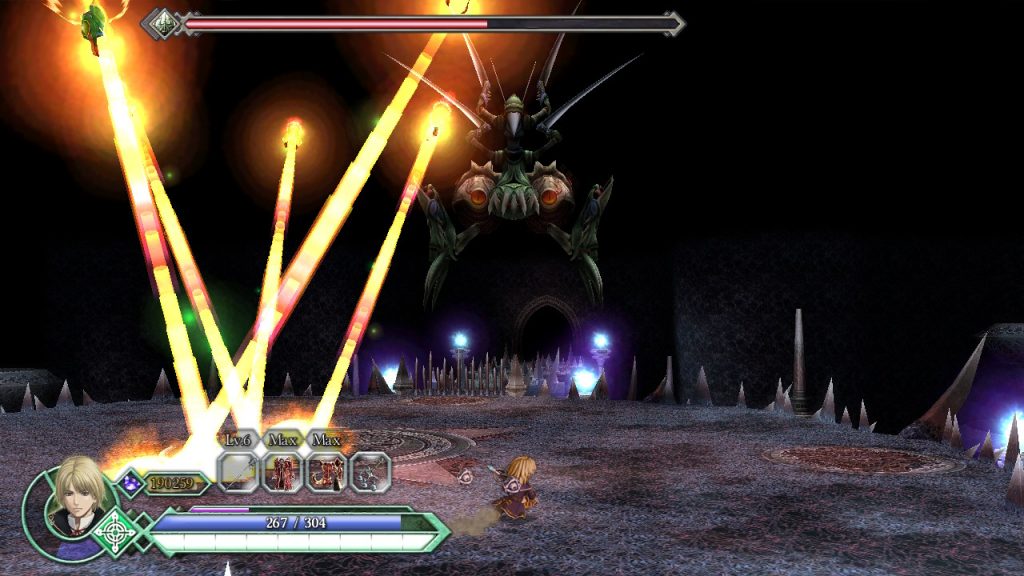 I’d also like to take a quick second to point out the fact that Ys Origin has some of the most creative and diverse bosses that I’ve seen from a game in a long time. While each of the game’s fights with other humanoid characters plays out similarly, the demonic floor bosses at the top of each area are about as different from each other as you can get. Between creatures like a giant whose arms you have to scale, a stationary flower creature whose battle feels more akin to a shoot-em-up, and the lovely gentleman pictured above, Ys Origin creates within players a dire need to adapt to whatever is thrown at them. And, while the battles can be frustrating at times, the brilliance of the game’s creativity always shines through.

An Origin to be Proud of

I’ve said it already, and I’ll say it again; Ys Origin is an incredibly refreshing game. Featuring characters with incredibly diverse playstyles, simple-yet-challenging combat, and an unmistakably large amount of that tried-and-true Nihon Falcom polish, Ys Origin is not only a celebration of Ys, but of action RPGs as well.

Full disclosure: This review is based on a copy of Ys Origin given to Hey Poor Player by the publisher.