Sweeter ‘n a Barrel of Sardines 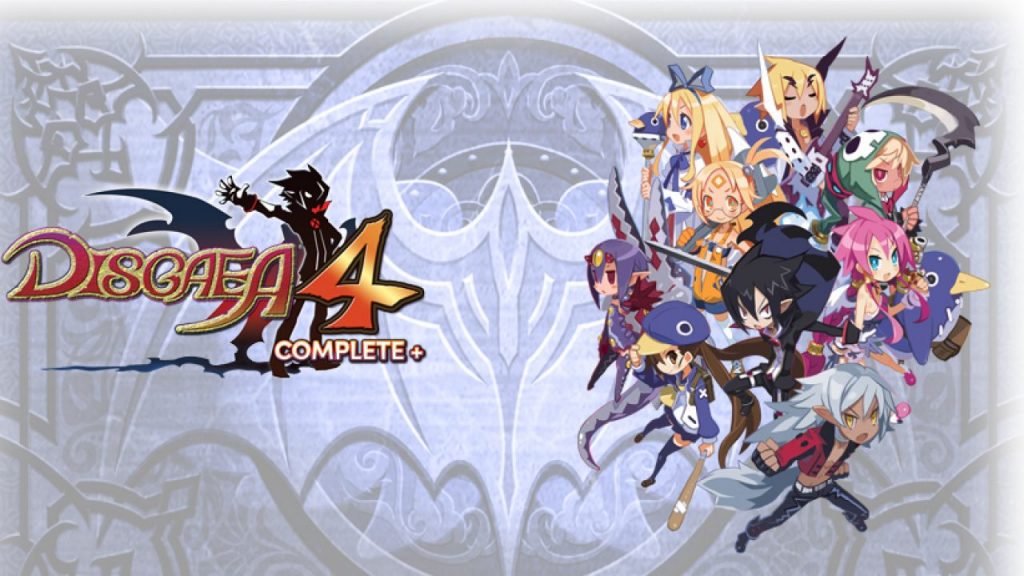 Things are looking up for Disgaea fans right now, dood. Between the recent announcement of Disgaea 6 (finally!), and Prinny 1 & 2 soon to be making itself much more accessible to players, chances are good that if you’re a fan of NIS’s netherworld antics then you’re currently hyped to some degree or another. And I am, too! But the release of a new Disgaea doesn’t mean that I’m going to forget about the old ones anytime soon. It’s true that the series has been very good with building upon itself in a technical aspect with each new release, but you can’t deny that each game still has something unique that helps it to stand out in some form or another—and that couldn’t be truer for Disgaea 4 Complete+.

I love Disgaea 4. It’s my favorite game in the series. Is it the most technically polished of the bunch? Obviously not—things were never quite the same coming back to this game after playing Disgaea 5. But that doesn’t stop it from being wonderful. From its addictive combat to its dizzying amount of optional content, to its wonderfully written story. And, while I suppose you could say all of those things are true for every Disgaea game out there, there’s something about this one, in particular, that makes it so charming to me that it only seems to get better with each subsequent replay (especially with the “Complete+” bit tacked on). 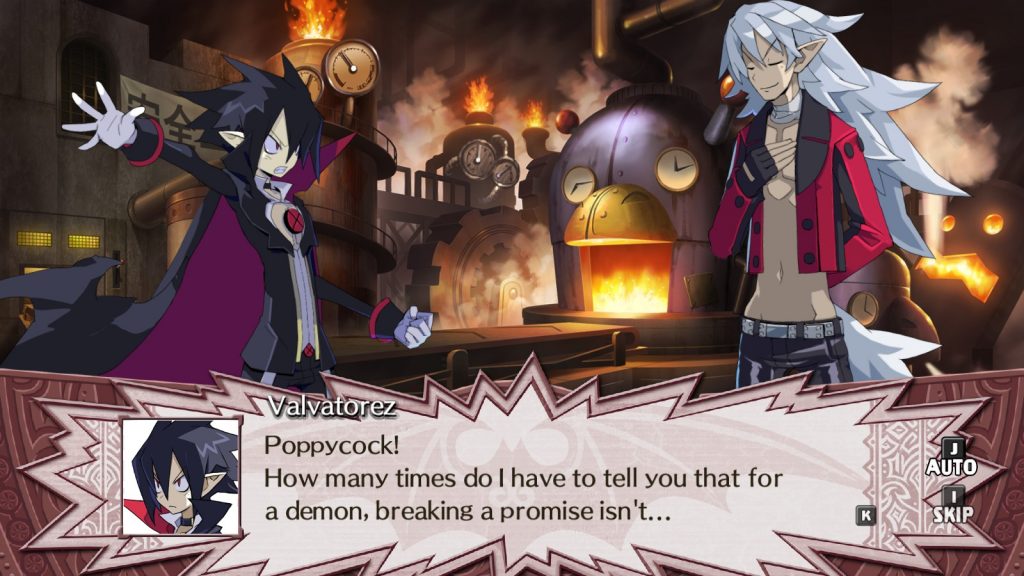 I don’t think that I’ll ever get tired of listening to this dude talk about eating fish and keeping promises.

We’ve all heard it before; an ex-tyrant of a vampire and his werewolf steward are quietly living life in Hades—where they dutifully train creatures that are one part criminal and one part exploding penguin suit—when all of a sudden they’re forced to team up with a dead high schooler and a thieving angel in order to take down the government. Actually, that’s a total lie. You’ve probably never heard anything remotely similar to that unless you’ve literally played this game. And, even if you have, it’s hard to deny that thinking in a way as super-condensed as I just described it makes it sound like nothing short of a fever dream. But that’s precisely what makes it so amazing.

NIS’ stories have always been top-notch in the Disgaea series, but Disgaea 4‘s has always been especially incredible in my book. Part of this, of course, comes from the way the story itself is written. D4/C+ to this day still manages to be the most wonderfully bizarre form of political commentary that I’ve ever seen in a game. I’ll be honest; I typically prefer my games to be free from things that, shall we say, feel “too real.” But I’ve never minded it in this game. Despite the entire goal of Valvatorez’s journey being to literally overthrow the Corrupternment (the government of the Netherworld), none of the pseudo-political talk, or even the few on-the-nose jabs at real-world political parties, feel like NIS trying to push a message, and more like them just wanting to find a new way to tell a Disgaea story; an attempt which is absolutely successful. Part of this is due to the fact that this game (nor any other in the series) never takes itself seriously, but I’ve always thought that the main reason it avoids inadvertently waving around some kind of banner is due to its wonderfully detailed focus on character development. 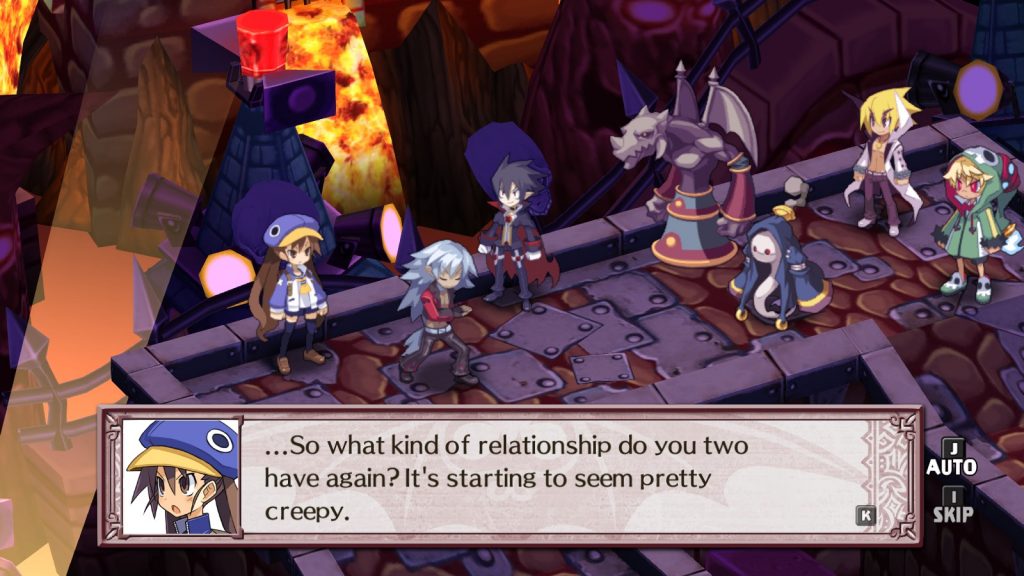 Clearly, you’re just jealous that you don’t have your own anime demon butler.

As far as I’m concerned, Disgaea 4 still has the best characters in the series. However, for this review, I’d like to focus on why Valvatorez, D4‘s protagonist, ultimately steals the show. Drac Attack himself aside, every protagonist thus far has been some nebulous form of demon (or half-demon), meaning that the writers were essentially free to develop the protagonists how they’d like. Valvatorez, however, is a vampire, meaning that he should be harder to make into an entirely unique character—”should” being the keyword, here. Not only did NIS do their best to stay away from most of the typical vampire archetypes while also avoiding alienating him from vampire-dom entirely, they also made him exceptionally weird even by Disgaea standards. He has a love for sardines that borders on obsession, treats promises as gospel, and makes his way through every situation with a theatrical flourish that is both highly unnecessary and incredibly funny—all on top of having a dark and dramatic backstory that’s almost too serious to believe. A character like Valvatorez wouldn’t fit into most games’ idea of a protagonist, and that’s why he’s the perfect protagonist for a series like Disgaea.

So Many Battles, so Little Time! 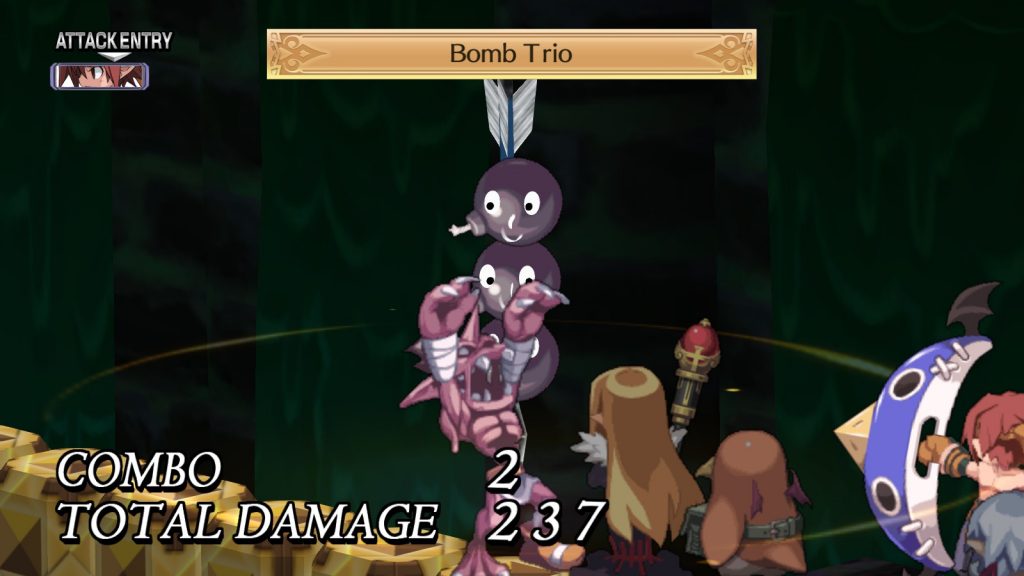 You might be asking how the “Complete+” part of Disgaea 4 Complete+ changes the way the battles play out in this game. The answer to that, not surprisingly, would be not very drastically. In fact, aside from the fact that D4C+ adds in a few extra skills and spells for certain characters, battles are exactly the same. That isn’t a bad thing, though. As chaotic as the game might seem at times, Disgaea has always been formulaic in its approach to how it handles itself, resulting in a fun and high-quality end product. In all fairness, the game does feel somewhat lacking in comparison to Disgaea 5 due to the new mechanics introduced in that game, but that isn’t really D4C+‘s fault.

There is one specific change worth mentioning that, while not actually part of the battles, still majorly affects how they’re set up—the Cheat Shop. Originally debuting in Disgaea D2: A Brighter Darkness, the Cheat Shop lets players mess around with XP, HL, and Mana multipliers (within reason), and also includes the ability to adjust enemy strength. While the Disgaea series has always been about allowing players to make the game as easy or as difficult as they’d like, the ability to actually adjust the story to your current level is a whole new level of customization. I, along with most others, I’m sure, tend not to chew through the story as quickly as possible. I’ll knock off a few story missions here and there, and then spend the next 5 hours trying not to die in the Item World—a habit which usually results in the main game becoming pitifully easy due to my being over-leveled. However, thanks to D4C+‘s addition of the Cheat Shop, I can actually make story-related levels feel meaningful again! And I can also use it to power-level.

An Empire of My Own 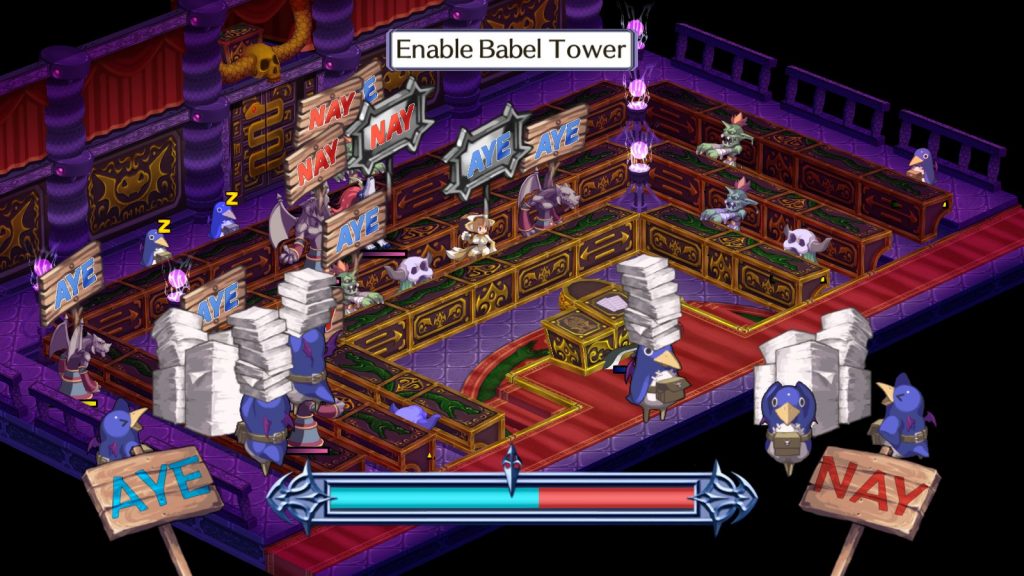 I feel like there’s a good joke in here somewhere.

While it’s not new in terms of what Disgaea 4 Complete+ has to offer, I’d like to take the time to compliment this game’s Cam-pain mechanic. A natural, and very fitting extension of the game’s Dark Assembly mechanic (known as the “Dark Senate” in this game), the Cam-pain HQ is a unique take on a skill-sharing system. By obtaining (via the Dark Senate) and placing buildings known as Dark Symbols upon a map, players are able to bestow special skills upon groups of characters—such as characters in a group receiving a portion of XP from any kill made by another group member—and can even create synergy between characters by placing them in adjacent squares on the map. It’s not only visually unique and thematically fitting for this game specifically, but it’s also a fun mechanic that can only be found within the world of Disgaea 4.

Despite not offering much, if any, change to the Cam-pain HQ, there are some noteworthy additions made to the Dark Senate itself. While the Dark Senate still works in the same way that it always has, players are afforded a few more options this time around which can affect not only themselves, but other players as well. By appointing what is known as a Foreign Minister, players are able to upload a single character who, once uploaded, will randomly start appearing in other people’s senate assemblies. Generally, foreign ministers are just as fickle as everyone else (although there are a few small things that can be tweaked), but seeing other people’s characters pop in is fun. Usually, anyway. Additionally, players whose requests get denied can now pay the senate to change their minds. It’s not something you’re going to be able to do right away (these guys are not cheap), but it comes in handy during later points in the game.

Disgaea 4‘s time as top dog has come and gone, but Disgaea 4 Complete+ ensures that this wonderfully wacky tactical RPG will be anything but forgotten. Between the polished combat, loads of extras packed into the game, and the amazingly well-written story and characters, it’s hard not to fall in love with a game like this.

Full disclosure: This review is based on a copy of Disgaea 4 Complete+ given to Hey Poor Player by the publisher.

A Must-Play Masterpiece Even most of the best games have issues. Things I would change if I could, even if they’re minor. Every now and then, though, a game…