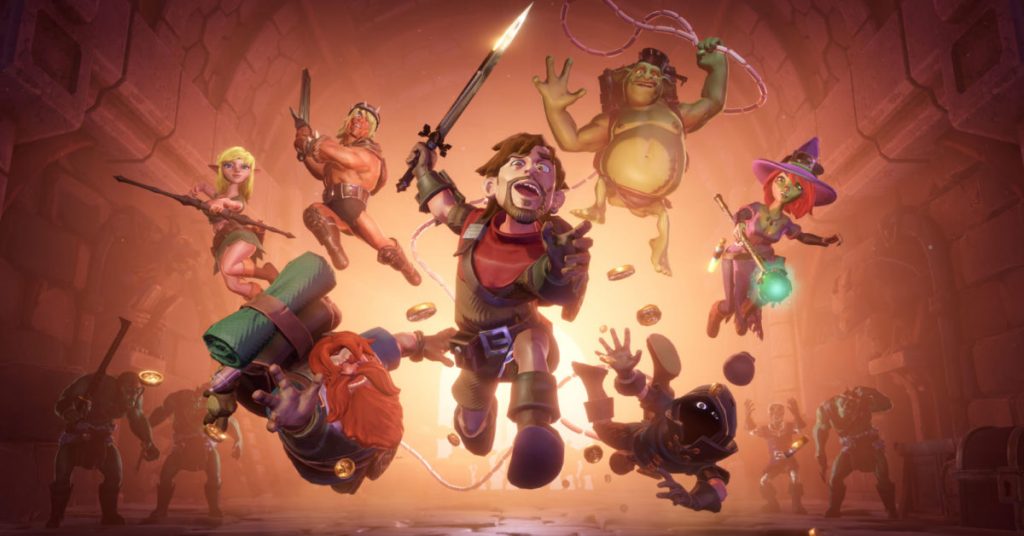 I have been dying to play Dungeons and Dragons for the past couple years ever since I heard of the flexibility of story-crafting behind it. I finally got my chance to play after my work organized a one-shot campaign between the small handful of us, and it was so much fun I’ve been threatening to join a group ever since. Of course, with the way 2020 has been panning out it’s been more of a waiting game than anything, but I still swear I’ll get to it one day. That’s what I wistfully tell the dice collecting dust on my bookshelf, at least.

So when The Dungeon of Naheulbeuk: The Amulet of Chaos came across the ol’ review inbox, I legitimately jumped at the chance to play it. Although it’s not true Dungeons and Dragons, it draws plenty of inspiration from the classes, races, terms, and standard quests and sidequests that one might get wrapped up in during a campaign. Based off the beloved French audioseries Le Donjon de Naheulbeuk, the game literally takes a page from Pen of Chaos’ first chapter — which, actually, is great for non-French speakers, considering this is the first time it’s been translated. 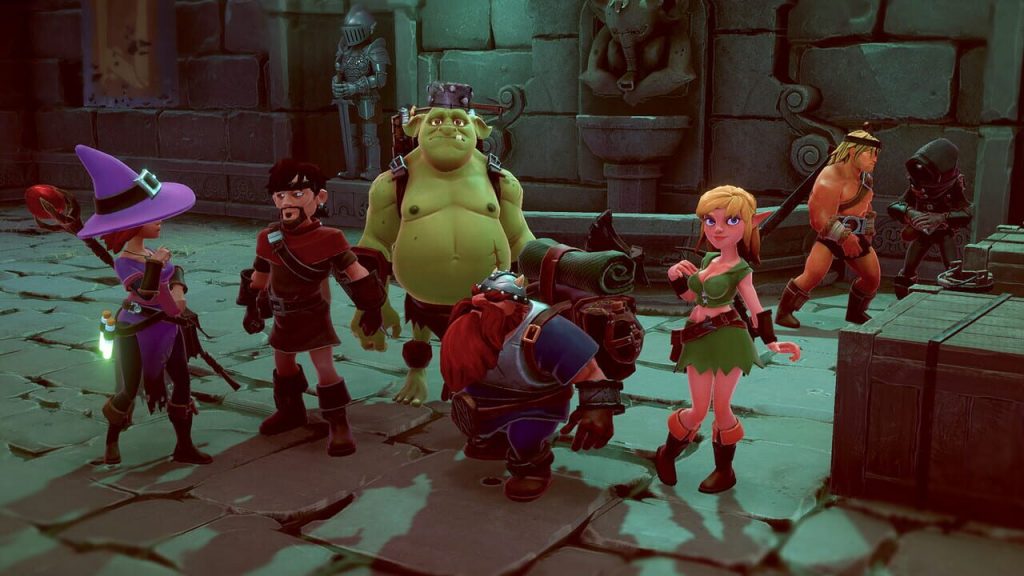 The premise is simple — a ragtag group of adventurers has been asked to venture into the Dungeon of Naheulbeuk to obtain the statuette of Gladeulfeurha. Like you do. Of course, it’s dangerous to go alone, so teaming up with a variety of different classes will make for a balanced adventuring party. A standard Ranger, an oafish Barbarian, a dumb-blonde Elf, a bookish Wizardess, a straightforward Ogre, a cowardly Thief, and a stereotypical Dwarf get the party started with an option to add on a by-the-book Paladin, a snooty Priestess, or a goofy Minstrel later on (or none of them, it’s your campaign, you do you). By traipsing around all levels of the dungeon and encountering both friend and foe alike, our heroes will attempt to complete their quest and obtain their promised reward — keyword: attempt.

You see, nothing is very straightforward for our adventurers in The Dungeon of Naheulbeuk: The Amulet of Chaos — they just want to get this statuette, but there’s this amulet that seems to stick to them like a thorn in their side, causing a lot of distracting chaos (hence the name and all). Additionally, there are plenty of people within the dungeon that seem to need our heroes’ help, such as chasing chickens and cheese wheels. Each side quest, while rewarding, definitely causes the party to lose a bit of focus, but after experience and gold is gained they’re back on track to find the statuette. 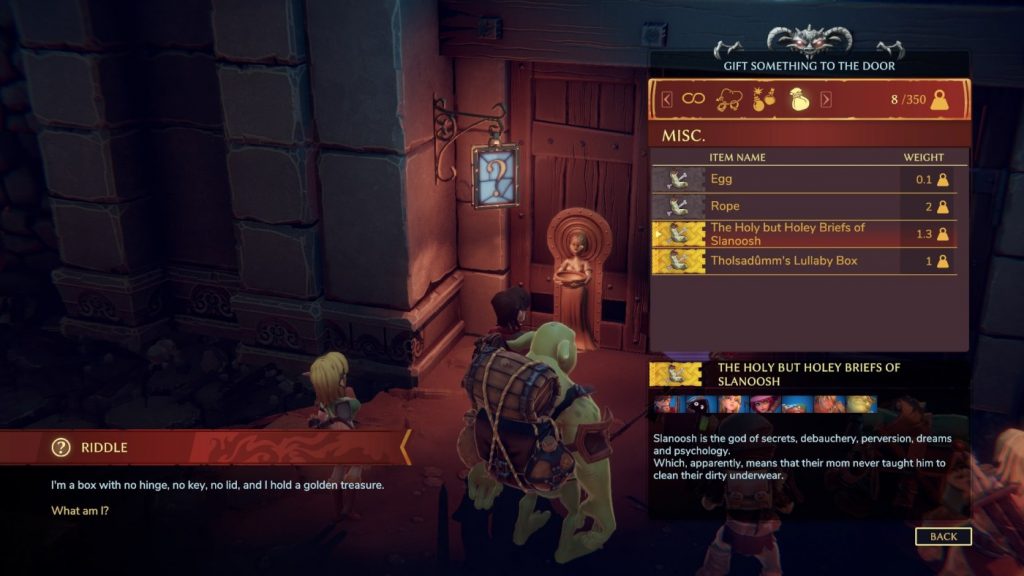 The controls in The Dungeon of Naheulbeuk: The Amulet of Chaos are pretty simple: while exploring, click any character you’d like to have lead the party, then keep the right click down as you lead them around the dungeon. Keep a finger on the “tab” button and you’ll be able to see any interactable items, such as levels, doors, and treasure chests. You can also use WASD keys to move around in this section of gameplay, but I don’t recommend it, as the characters seem to stop responding to the keys for some reason, making for some clunky stop and go. Finally, use “Q” and “E” to manipulate the camera angles and the scroll wheel to zoom in and out.

While in battle, The Dungeon of Naheulbeuk: The Amulet of Chaos keeps a hefty amount of information organized in an easy to use manner. Turn-based tactical gameplay is tends to offer plenty of options for players, easily tiptoeing from fun to frustrating if too much is going on at once. The Dungeon of Naheulbeuk: The Amulet of Chaos will feel very intuitive to anyone even remotely familiar with Dungeons and Dragons, and its clean yet quirky UI will certainly appeal to anyone who loves turn-based fantasy RPGs. With everything being point and click in battle, players can carefully strategize without having to worry about controls confusing anything. 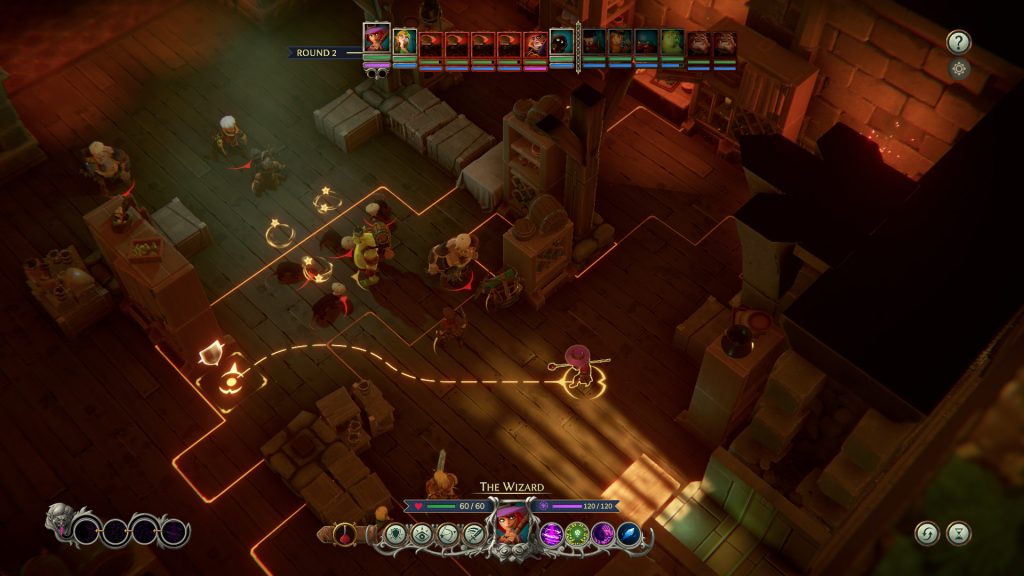 Everything about The Dungeon of Naheulbeuk: The Amulet of Chaos is purposefully exaggerated to appeal to people who love nerd shit (and I mean this in the best possible way). With references to FFX’s Blitzball, The Hobbit’s egg riddle, and Fable’s chicken chaser soundbite, The Dungeon of Naheulbeuk: The Amulet of Chaos is a celebration of all things geeky, pouring nerd references into every possible nook and cranny it can find. There’s even a bit where I swear a tavern patron is humming the chorus of trolololo — you can feel the love for games, books, and meme culture in the game that appeals to… dare I say, gamers of a certain age? And it’s tremendously appreciated.

The cheekiness doesn’t just end with the references; the writing is dripping with dad-jokery from the word go. This is the kind of thing that is really going to divide players, in my opinion — some players who come from the Dungeons and Dragons worlds are really going to love how much the original writer and developers lean into DnD race and class humor (the elf and dwarf absolutely despise each other, for example), while others may find it so mind-numbingly cliche that it becomes a put-off. I fall more closely into the former camp, although even I must admit that the writing becomes a tad bit predictable at times. As long as players keep in mind that the original story the game is from borders on parody, it’s all good. 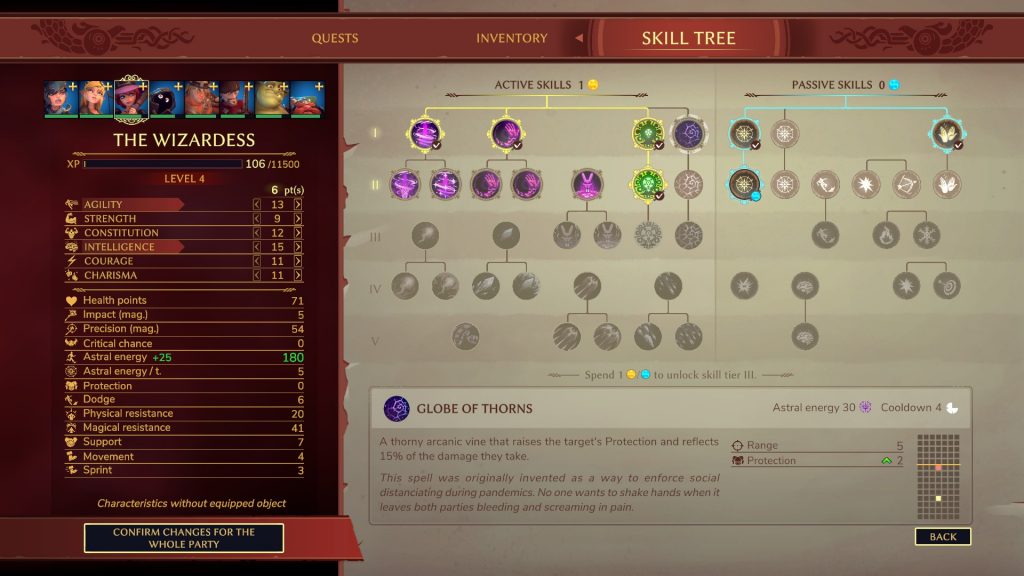 The battle system is either going to be something players absolutely love or feel utterly confused about. Just like in Dungeons and Dragons, players have a set amount of action points and can use them to move, attack, or both. Stances are important, so facing away from your enemy can mean they’ll have the ability to sneak up from behind and backstab. The order on the battlefield is important as well; depending on where you’ve dumped your skill points, you’ll need to keep certain characters together, such as the Wizardess and the Ogre, to increase their intelligence, courage, or impact. Additionally, you’ll want to keep your heavy hitters like the barbarian and the Ogre up front while keeping your ranged attackers like the Elf or Wizardess in back. Some characters can do both, like the Ranger, Dwarf, or Paladin; allowing them to move up and down the battlefield as needed is a key part of strategizing your way to victory.

True to Dungeons and Dragons vibes, The Dungeon of Naheulbeuk: The Amulet of Chaos features character sheets, abilities, spells, items, and even languages (the Wizardess is the only person who can understand the Ogre); additionally, there are also rolls on occasion, where you can sometimes roll a critical strike or a critical failure. I do feel that the latter could have been handled better, because these rolls tend to appear at random and never make me feel like I’ve passed or failed a check like I did in games like Disco Elysium or actual Dungeons and Dragons. Still, some dice are better than no dice when paying homage to the incredibly important tabletop RPG, so although I feel like it could have been done better, the fact that dice were present was good. 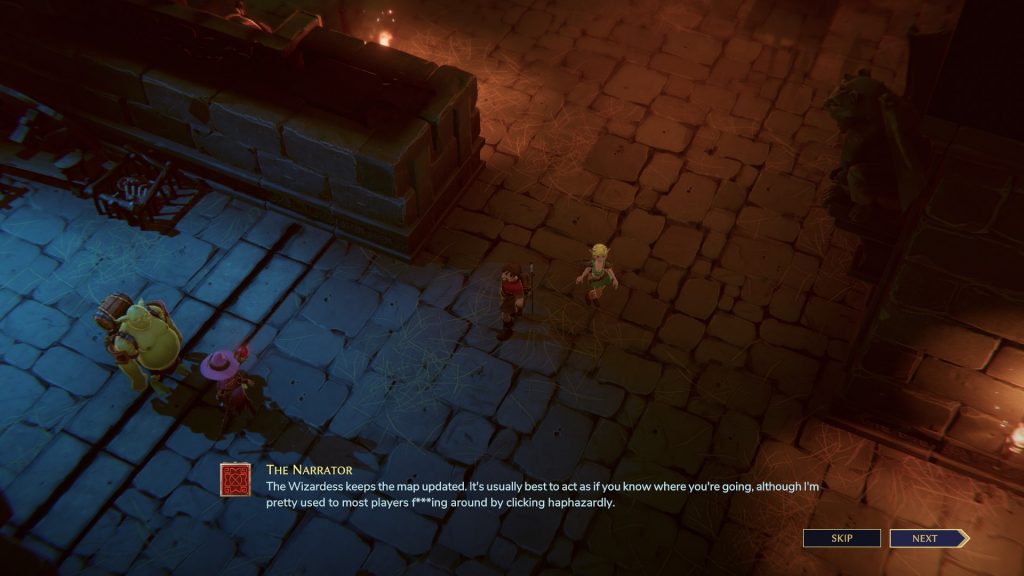 Obviously I have to talk about The Dungeon of Naheulbeuk: The Amulet of Chaos’ voice acting, featuring real nerd Felicia Day as the redheaded Wizardess. Although the game was cast wonderfully and the characters, both playable and not, really lent that exaggerated feel that gives The Dungeon of Naheulbeuk: The Amulet of Chaos such personality, the technical issues hampered the delivery more often than not. During battle, the game would stutter before a quote was delivered, making for these really awkward pauses in the heat of the moment; during exploration, characters would often speak too quickly, talking over each other despite the voice actors’ delivery accounting for a more natural timing. It was such a shame that the performance issues of the game cast a shadow over the stellar performance of the voice actors, and I hope the dev team is working on making their title run smoother.

Speaking of performance issues, there was one snafu I experienced after a particularly long battle — I unfortunately was stuck on a loading screen for what seemed like eons. I finally decided to just force quit the game and start it up again, and as there is a generous autosave, it loaded me right back into where I was before I got stuck. I only ran into the issue once, but as I’m able to run bigger games without issue on this same computer, it did give me a little pause; in the very least I felt that it was worth mentioning (Editor’s Note: it appears the dev team has patched the issue of “endless loading screens.” Kudos to their quick action!)

Believe it or not, I actually had to force myself to stop playing The Dungeon of Naheulbeuk: The Amulet of Chaos to be able to sit down and write this review. It’s been a long time since I’ve found a great turn-based tactical game with unapologetically authentic writing that I seriously didn’t want to move onto other games. Even now I’m just quickly whipping up a conclusion so I can get right back into the fray! With cheeky writing and comfortable mechanics that will fit older gamers’ playstyles like a glove, The Dungeon of Naheulbeuk: The Amulet of Chaos is a can’t-miss cantrip into Dungeons and Dragons territory that will surely please any nerd worth their salt. If you want a fresh take on a familiar experience that will leave you engrossed from the get-go, be sure to tag along with The Dungeon of Naheulbeuk: The Amulet of Chaos.

Editor’s note: This review is based on a copy of The Dungeon of Naheulbeuk: The Amulet of Chaos given to HeyPoorPlayer by the developer. 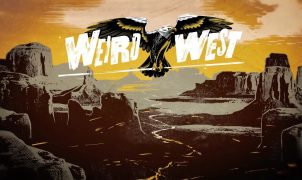 Game Pass Gets Weird To Close Out March 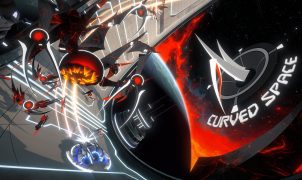