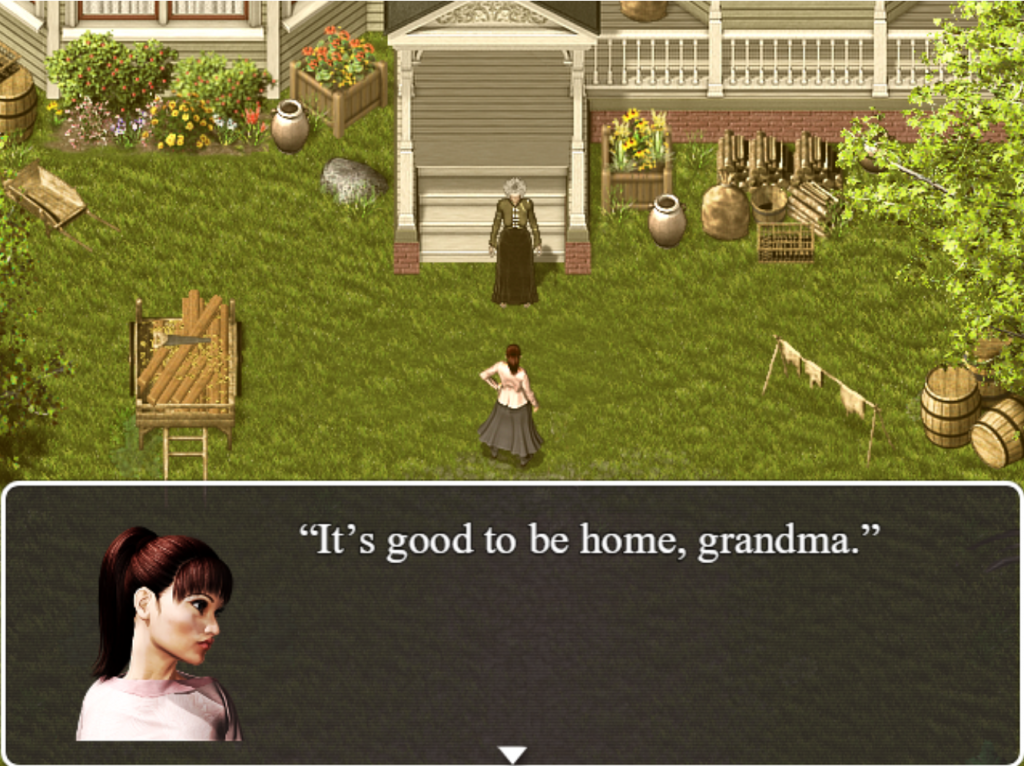 I think most transplants to Los Angeles can agree that we left “home” for a reason. Although I got my start here in these fire burnt hills, we soon moved away and I grew up in the predominantly LDS Utah, my nastily-divorced parents both ascribing to the aforementioned faith to varying degrees. It wasn’t the religion that made me move away though; LA has just always called me back, and my few and far between trips back to Utah now feel foreign, as if I’m travelling back to a time when I felt more limited — a time when I was trapped by my parents’ bitter battles. And as much as I love both of them dearly, it’s hard to stay for too long before I remember why I left in the first place. 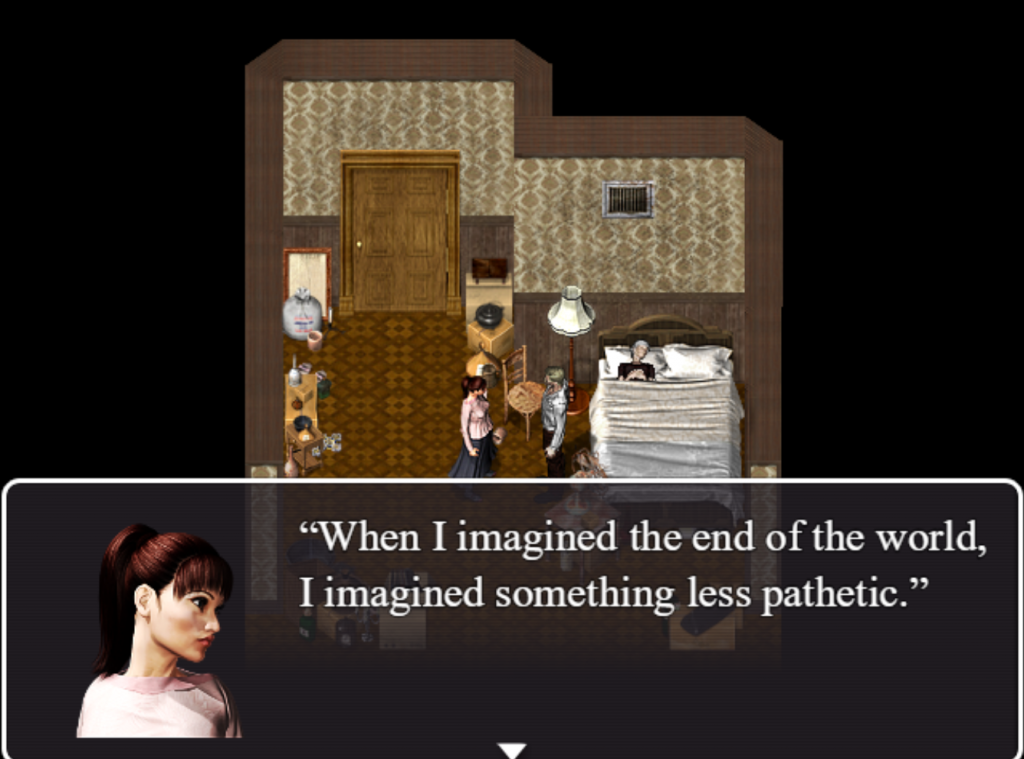 Home: A Quarantine Story focuses on Alli, the eldest daughter of James and Jane Howard, who has decided to visit the Howard Homestead after four years of living on her own. Normally, that wouldn’t phase any 28-year-old, but Alli’s family isn’t like many others in the 21st century, as evidenced by their pioneer-like clothing and refusal to use any technology newer than a 1940s radio. Led by matriarch Jane, the Howards live a life of voluntary isolation, interacting only with like-minded families who choose austerity over modernity — a life Alli tried to escape years ago.

At first, Alli’s visit back home was pretty normal — the family dined upon her favorite foods, including sauerkraut, and she became reacquainted with her siblings and worldy-turned-woodworking cousin who lives in the workshop out back. Of course, not everything settled easily into place for Alli, her maternal grandmother constantly badgering her to have a baby while her paternal grandmother lay dying in a cluttered spare room. Oh well, it’s only a week in this place. Only a week before she can go back to her life in the city… 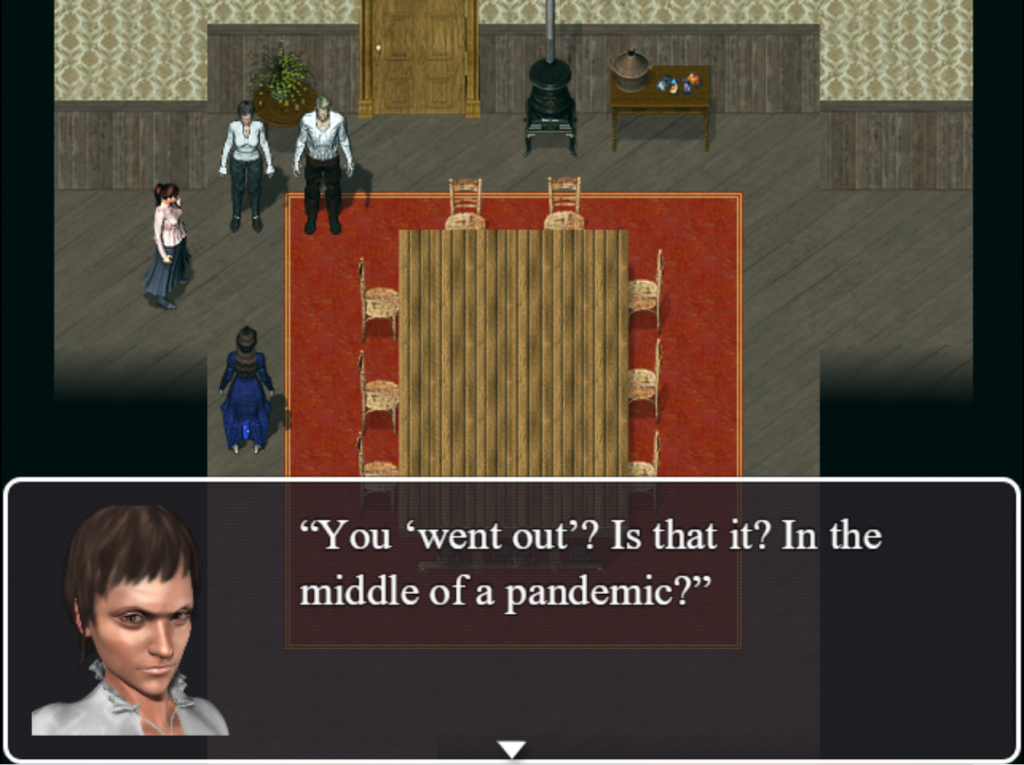 …except that day never comes, as the unthinkable happens — a pandemic sweeps the country, shutting down flights and stranding Alli in her childhood home. With a seemingly oppressive way of life grabbing at one arm and her heart’s desire — freedom — grabbing at the other, can Alli manage to survive quarantine with her overbearing family? And, perhaps more importantly, can the family survive the sudden onset of a dangerous illness that seems to have accompanied Alli back home, along with everything else 2020 brings their way?

Like any RPG Maker game, controls in Home: A Quarantine Story are pretty simple. Players walk around using the arrow keys and can hit enter on people or items of interest to move the story forward. As there is no combat to be found in this game, any action is experienced through the storytelling itself, which does indeed have its highs and lows. Home: A Quarantine Story is free of bugs and works as expected, save for a few forgivable typos along the way. 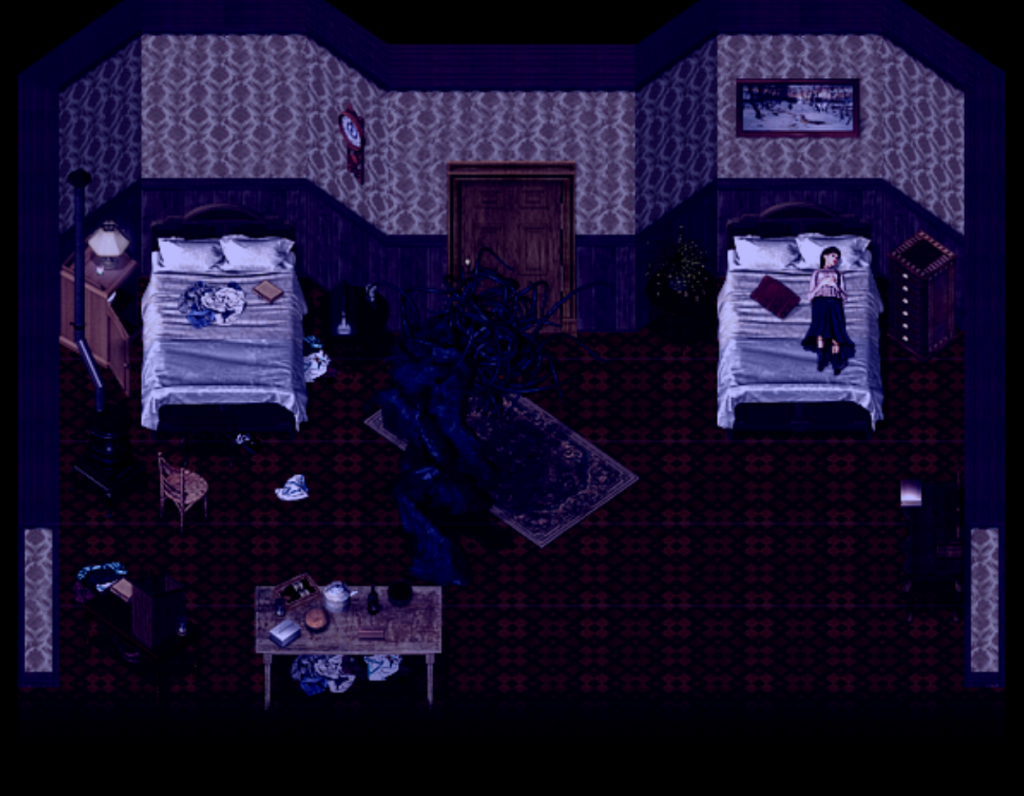 The graphics in Home: A Quarantine Story aren’t necessarily my favorite, but they’re objectively their own unique style. I was reminded of a cleaner, sharper version of Zelda’s Adventure style graphics, which, admittedly, are charming in a very specific way. While the inside of the home felt drab and dull, I found the exterior to be pleasantly bright and inviting, especially the garden and the workshop. That’s not to say that I didn’t enjoy the Howard’s home — a character in its own right. I did love how lived-in the house felt, especially the bedrooms, and how each item yielded practically a page’s worth of flavor text to really give the player as much knowledge as possible about Alli’s world.

The sounds of Home: A Quarantine Story are a tale of contrasts. While I found the sound effect quality to be a bit low and delayed, I’d be lying if I said I didn’t find that even a little bit charming as well. Coupled with the dulcet tones of the acoustic guitar music playing throughout, the simplicity of Home: A Quarantine Story’s audio oddly drove home the atmosphere Alli found so chaining. I found the soundtrack pleasant, but it definitely gave off vibes that cautioned against slipping back into the trap of accustomed comforts. Overall, the sound design, as simple as it is, elevated the feel in Home: A Quarantine Story to emphasize the storytelling efforts. 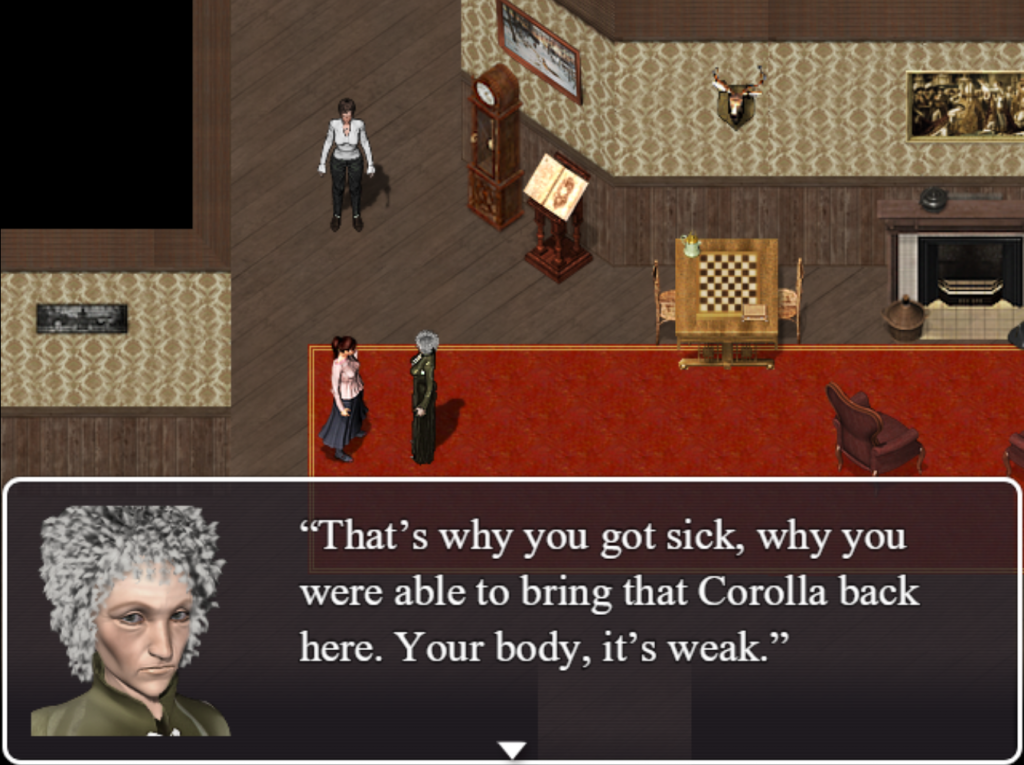 Speaking of storytelling, Home: A Quarantine Story offers a relatable narrative that is surprisingly memorable — some ways better than others. Alli’s complicated emotions regarding her childhood home definitely resonated with me in situations like going through the pantry and discussing how she used to eat a particular food every day until she became sick of it, yet it still brought memories flooding back just by looking at the label. In other times, I think the developer’s penchant for grimdark games snuck through to provide some lengthy shock factor segments, such as one tangent regarding her brother’s bowel movements. I get that boundaries are blurred when it comes to family matters, but perhaps some things are better left unsaid… or at least not described so graphically.

I don’t want to spoil the story, as it’s a free game that I think anyone who likes a different sort of visual novel would most certainly enjoy, but I think it’s worth discussing the note Home: A Quarantine Story leaves on, which is uncertainty. While most stories aim for a conclusion, Home: A Quarantine Story leaves players hanging on, as if the tale abruptly ends. At first, I found this a bit disappointing, until I realized the strength behind the choice: Home: A Quarantine Story can’t possibly conclude like other stories because it takes place in the here and now. It’s about what’s happening as we speak. How can there be certainty in a story about 2020 when 2020 hasn’t ended yet? In that sense, I find a simple brilliance in Muntz’s storytelling and, in that moment, definitely became a fan.

I decided to review Home: A Quarantine Story because I was knowledgeable enough with the developer’s previous work to know I was going to get a good story; what I didn’t know was just how much it’d stick with me. A realistic narrative that builds a unique yet somehow familiar setting, Home: A Quarantine Story will softly resonate with anyone who can’t decide if their heart is with the home they’ve made for themselves or the home they grew up in. I’ll admit it doesn’t look like games I’m normally drawn to, but it’d be a mistake to judge this visual novel by its graphics. Home: A Quarantine Story is, may I remind you, free, so there’s really no reason not to pick it up on Steam today.

Editor’s note: This review is based on a copy of Home: A Quarantine Story given to HeyPoorPlayer by the publisher.