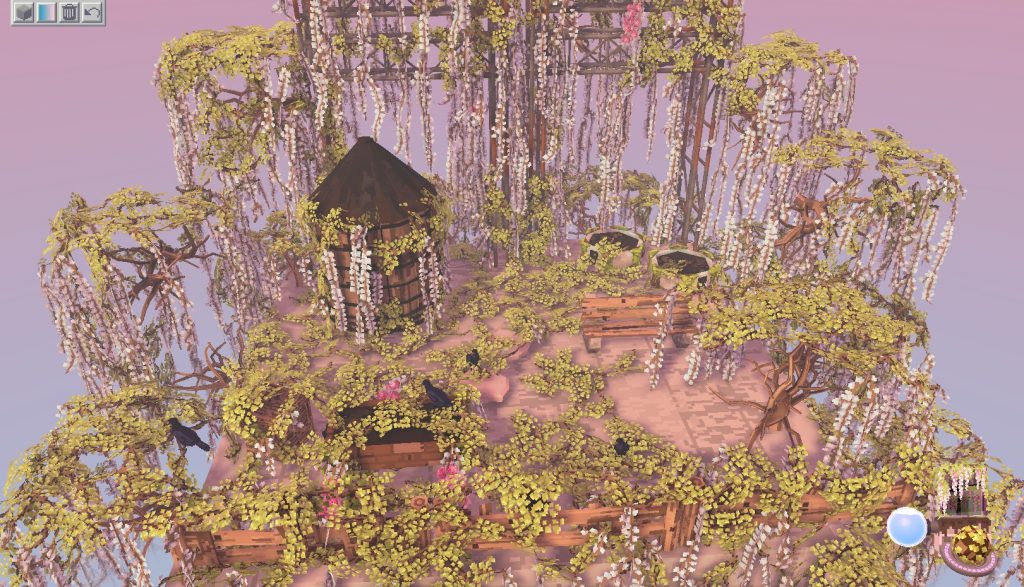 The last half of 2020 has me a bit worried. The wildfires are ravaging the West Coast to such a degree that we’ve been completely shuttered inside due to the apocalyptic haze hovering over Los Angeles, and my sister up in Oregon had to evacuate due to the fires threatening her home (she’s safe now, but that was not a fun week). Apparently hurricanes are up next for the East Coast, the largest Arctic ice shelf just shattered, and I just learned we don’t actually recycle our plastic and have been instead selling it because it turns out recycling plastic isn’t a viable business? Man, we are literally destroying our ecosystem… which, you know, isn’t all that bad for the Earth — it just means doomsday for us.

It’s moments like that where I stop and think that it’s sad how we’ve framed “saving the Earth” thus far, because the Earth will turn whether or not we’re on it. Like, if we pollute the Earth past the point of no return, where are we supposed to go? The Earth without humans would bear deep concrete scars cutting unnaturally through the landscapes that would ultimately become gloriously green after enough time passes. It’d be very far into the future, but that “life after death” growth without us would certainly be breathtaking. What a shame we won’t be around to see it.

At least Cloud Gardens gives us a glimpse into what that beautifully bittersweet apocalypse will look like. 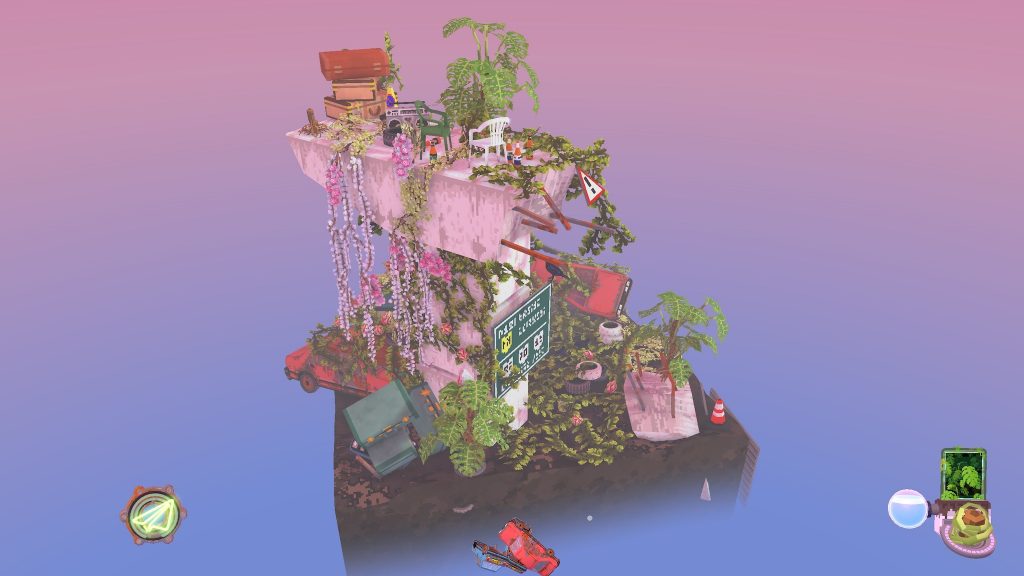 Currently in development by Noio, Cloud Gardens is “a chill game about using plants to overgrow abandoned wasteland dioramas.” Available on Steam early access for a launch price of $7.99 USD, Cloud Gardens is best described by the developer as “somewhere on the line between a game and an interactive toy.” With a relaxing campaign that unlocks items to be used in the included sandbox mode, Cloud Gardens has something that players of all ages can enjoy with the developer listening to player feedback to ensure the game becomes the best it can be.

The premise is simple — humanity, for whatever reason, is gone, and nature is reclaiming what we’ve left behind. Players take on the role of themselves, or perhaps a lonely god with a sense of aesthetics and a bit of humor as they urge the growth of various plants to take over buildings, parking lots, homes, and other dystopian landscapes. By dropping items like tires, cars, cones, beer bottles, gnomes, and more into the small square scene, plants overcome the forgotten items and turn them into veritable Gardens of Apocalyptic Edens. 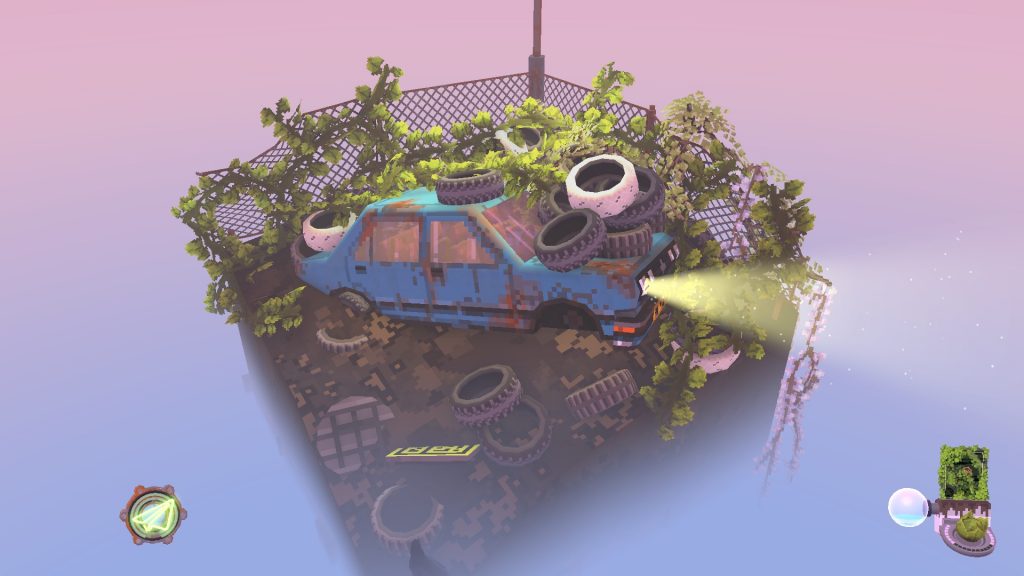 The aesthetics of Cloud Gardens are incredibly appealing; the graphics are reminiscent of the PS1 era, which gives the assets a sort of dirty, castaway personality that really fits with the overarching theme. The color palette expressed through a haze in the background can sometimes be calming, othertimes energizing, but always pleasing to the eyes. The plants themselves are so simply beautiful in their existence, starting from seeds and continuously growing, yielding flowers and swaying in the breeze. I found myself wholly unready to leave each time the levels ended, thinking nothing would be as stunning as what lay before me, being pleasantly surprised when the level immediately following would be just as serenely beautiful.

In addition to the visuals, the music authentically complements Cloud Gardens’ chillpolaclypse vibes. If you asked me to hum along to the sounds I wouldn’t be able to pick out any melodies in particular, but the soundtrack is memorable in a different way — the way it made me feel. The beauty of Cloud Gardens could be described as a pendulum, swinging between peaceful and morbid, but the music kept me grounded in a calm mindset through it all. Its meditative soundtrack was amplified by the soft breeze, bird calls, and rustling feathers, reinforcing the notion that nature is absolutely calling. 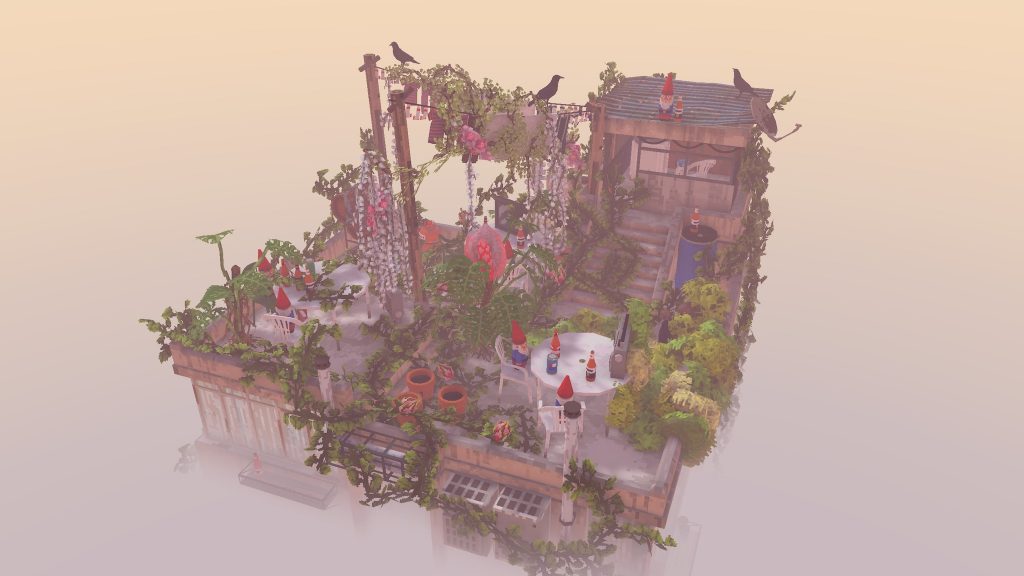 Gameplay itself is easy enough to pick up and play — you start off with a small scene and an even smaller seed. Plant the seed, and you’ll be given items to drop nearby, such as a car or a table. If the item drops within range, you’ll be able to encourage growth from the seed, allowing it to flourish into a fully grown plant. As it grows, it yields more seeds, which can be planted and grown, allowing this cycle to continue. Eventually, the plants will overcome the entire scene, reclaiming the abandoned homes, parking lots, and buildings and letting the Earth maintain the natural order of things. With campaign and sandbox modes, there will be something for all players to enjoy, letting the creativity flow as freely as the plants in the breeze.

I won’t lie, as serenely sad as Cloud Gardens is — the notion that nature will wipe what we’ve done from the Earth — I couldn’t help but feel a bit relieved as well. There is a real and present danger that human life will become unsustainable as the years drag on, and we tend to think of these situations as “end of times” scenarios. In truth, life will absolutely continue, nature’s bounty swallowing humanity’s deeds with no one around to see it but humorously placed gnomes that break the troubled tension. It was a reassuring notion to think that we won’t be able to destroy all life, that even if we are gone, life will survive, even thrive, without us. It’s the game we need for 2020 — a reminder that caring for the Earth isn’t some altruistic tree-hugging nonsense, but a cautionary tale that the world will forget us quickly if we don’t change, and soon.

Be sure to check out Cloud Gardens on Steam today. 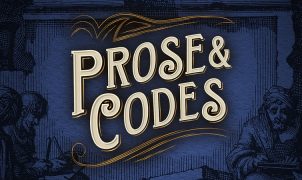 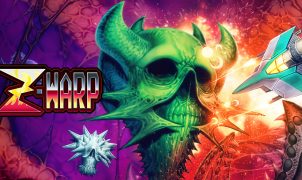 Z-Warp Review: Retro Done Right Z-Warp joins a long line of games releasing with a retro vibe, looking like the most impressive NES game you never played. Like most…