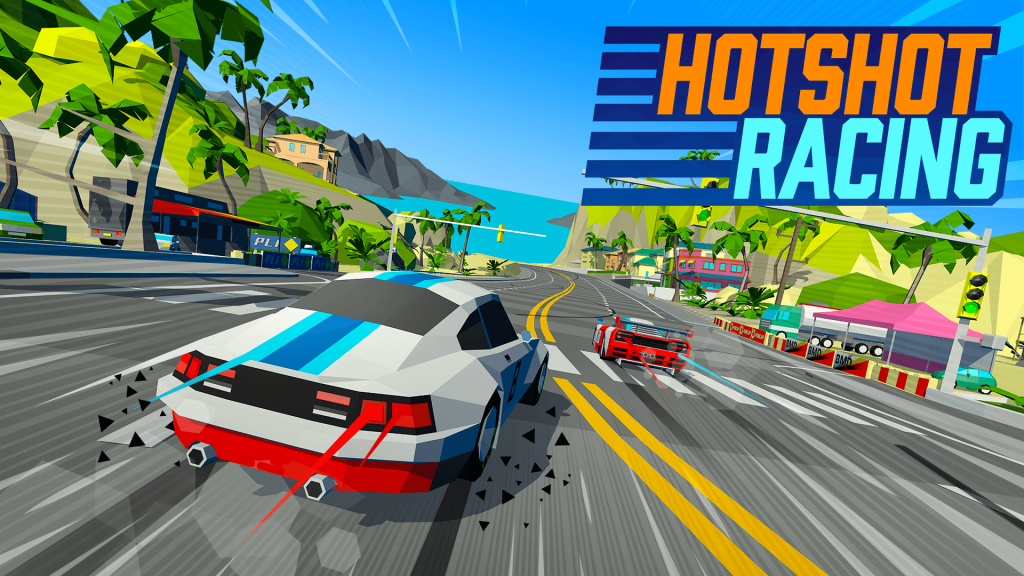 The ’90s were a magical time.  Technology in gaming was just starting the quantum leap forward from mostly 2D graphics to primarily 3D as the new “in” thing.  Though things started kind of rough, the primitive 3D aesthetic had its own charm in a “Money For Nothing” sort of way.  The retro gaming market has kept an interest in such an aesthetic in the back of people’s minds for quite a few years now, and a number of developers are making games that call back to the bygone polygonal, arcade game experience.  Hotshot Racing is one of those games, and it’s absurdly fun.

Made to bring back the feel of racers such as Ridge Racer, Daytona USA, and Virtua Racing; Hotshot Racing does so very well.  The first thing you notice is the super sharp, polygonal approach to the game’s design.  It doesn’t feel faked in any way, as some other games may try to do when going for the retro aesthetic.  This game looks like it leaped right off of a Silicon Graphics workstation straight out of the ’90s, or something you’d see in a dusty, smoky arcade ready to take your quarters.  Even with the simple presentation, Hotshot Racing is chock full of detail.  Lots of little details pepper each race track and make things feel bright, vibrant, and alive.  The racers themselves are also nicely designed, lively, and varied – despite their relatively simplistic backgrounds and stories. Even with all these little details, the polygonal approach allows the game to run at a crisp 60 frames per second, even on the Switch. 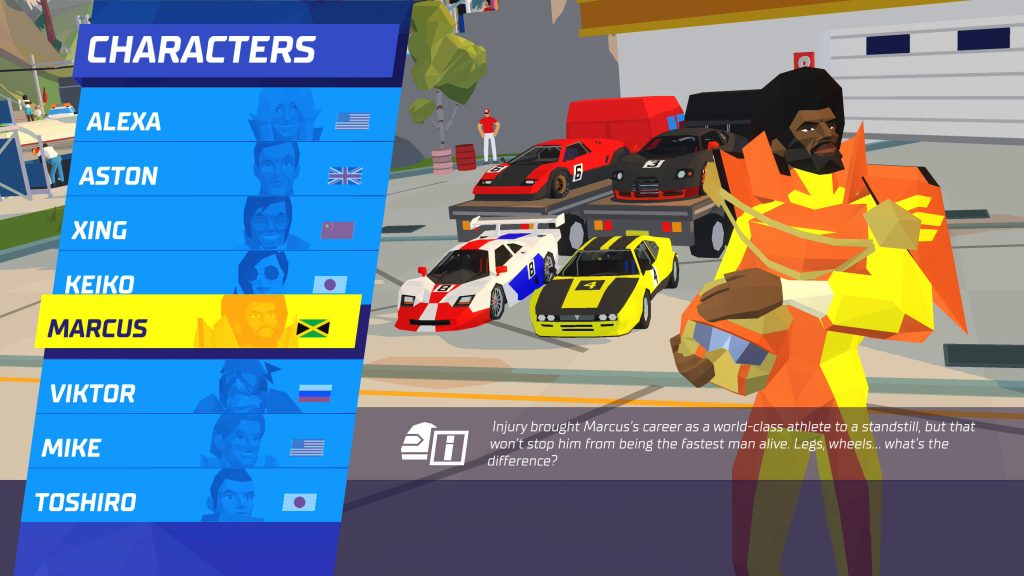 Hotshot Racing offers eight sharp-edged racers to choose from, each with their own quirky personality and backstory.

Of course, a game can look good all day long, but it doesn’t amount to much if it isn’t fun to play.  Fortunately, Hotshot Racing delivers on that front as well.  The game is simply a blast to play.  The controls are super smooth and responsive, and the handling of each car is fine-tuned to the point that getting a feel for each of the four different cars is super easy to do.  Hotshot Racing’s gameplay approach totally eschews any simulator feel in favor of a pure arcade experience.  Power slides are fun and easy to pull off and maintain, and doing so also fills a boost meter you can use for a quick boost of speed to push you ahead of the crowd.  You’ll want to maintain this speed too, as each race has a timer counting down with checkpoints throughout the racetrack, adding extra time.  The flow of each race is thrilling and fun, and I was excited for each new round to start. 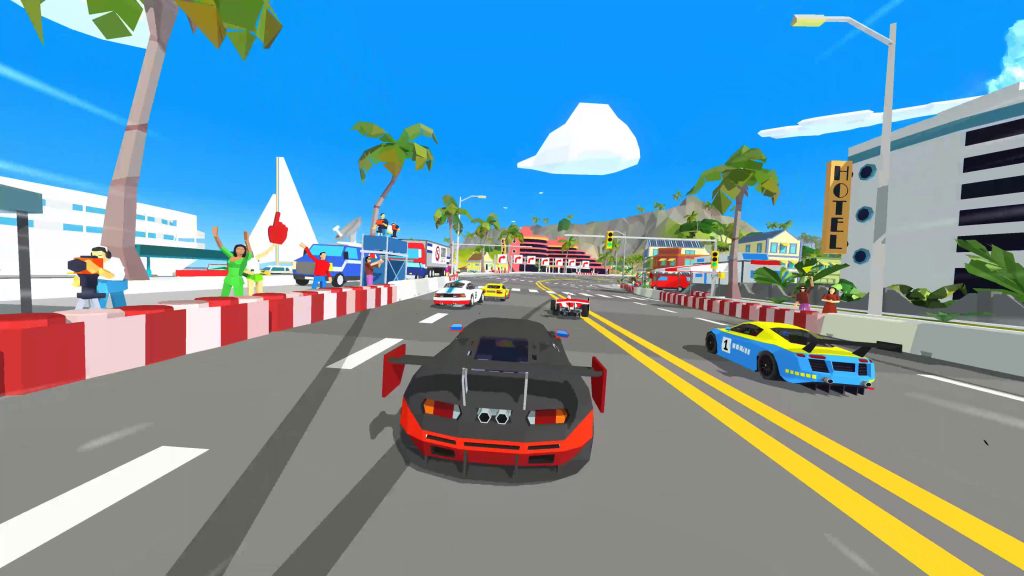 Ridiculously huge rear wings or not, each of the four cars in Hotshot Racing have a fantastic sense of speed and are really fun to drive.

The game is also challenging, too, in a number of ways.  Even on Normal difficulty, the other racers offer plenty of challenge to keep you on your toes fairly consistently.  You shouldn’t expect to win a race by simply driving clean the entire time.  You have to think about where and when to boost, account for other cars around you, and prevent other cars from passing you by either boosting or drafting.  This becomes even more of a challenge on higher difficulties, of course.  Automatic and Manual driving modes are offered as well, but I found that while I prefer racing manual cars in real life, the control layout (at least on the Switch) made shifting up or down kind of clunky.  I recommend Automatic to make your racing experience with Hotshot Racing a little more fun.

Outside of standard Grand Prix races, you can do Single Races to practice a particular track and car combination if you want.  You can also do Time Trials to hone your skills further and practice against ghosts to study and improve your lap times, and Hotshot Racing goes even further by adding two new modes I haven’t really heard of before: the aptly titled Cops & Robbers and Drive or Explode.  Cops & Robbers is akin to a game of tag, with one player starting as a cop and attempting to “tag” the other cars and turn them into cops as well until no other vehicles remain.  Drive or Explode is precisely what it sounds like – Drive a certain speed like Sandra Bullock and Keanu Reeves or a bomb blows your car up.  They’re simple distractions from the main meat of the game, but they’re still great fun.  Hotshot Racing offers up to 4 player split-screen or eight-player online racing for additional fun between friends. 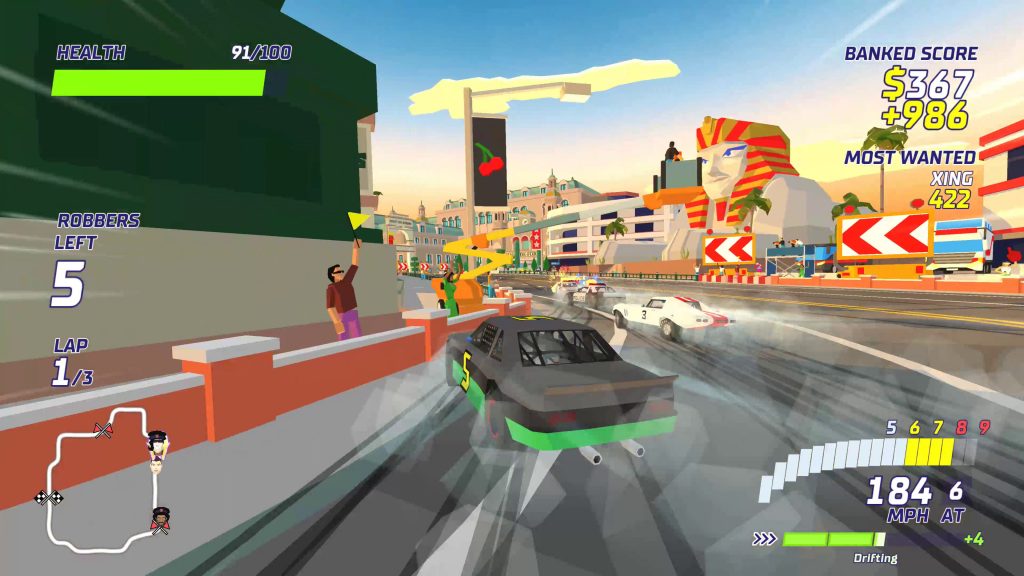 If there any complaints I’d have about Hotshot Racing, it would be the lack of content.  Though there are 16 tracks to play through(mirrored versions are also available), They don’t seem to last long enough.  Higher difficulties and additional game modes do add to the replay value, but with how quickly you can blaze through a race and even a whole Grand Prix, this will leave you yearning for more.  The layouts of each track can be a little on the simple side too, and with Hotshot Racing’s simple learning curve, you’ll definitely want to adjust the difficulty up a notch or two to maintain the thrill of other racers hounding your tail.  Hopefully, some DLC content in the form of new tracks, cars, and racers can be brought about later on down the line, but what is here is still awesome.  I just wish there was more of it.

Even with these minor complaints, Hotshot Racing is an excellent example of nailing the 90’s arcade experience.  Both in graphics, gameplay, and even sound.  The quips from the racers, the announcer yelling “CHECKPOINT!” every time you cross over one, and even the music evoke the feeling of sitting down in a seat of an old racing cabinet, putting some quarters in, gripping the steering wheel, and mashing the gas pedal.  Of course, the wheel and seat will be missing in most home racing experiences, Hotshot Racing is still plenty of fun without them.  If you want to take a short trip back in time to the ’90s, this is one ride you won’t want to miss.

Full disclosure: This review is based on a copy of  Hotshot Racing given to Hey Poor Player by the Publisher