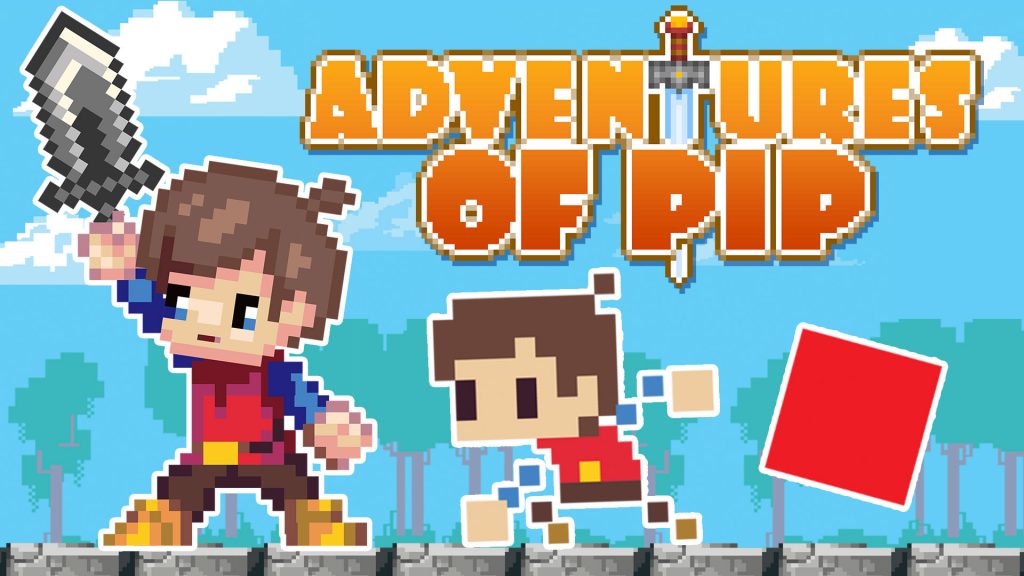 It’s been a while since I’ve had a chance to sit down with a basic platformer. I suppose that isn’t necessarily a bad thing; highly technical platformers, like Mega Man or Shovel Knight, are an absolute blast, and Metroidvanias are essentially my gaming lifeblood. But that doesn’t mean that basic is bad. Sometimes, it’s fun just to be able to turn your brain off for a while and enjoy running and jumping your way through a simple, come-as-you-are platforming experience. And, wouldn’t you know it, that’s the very experience that Adventures of Pip embodies.

Your Princess is in Another Resolution 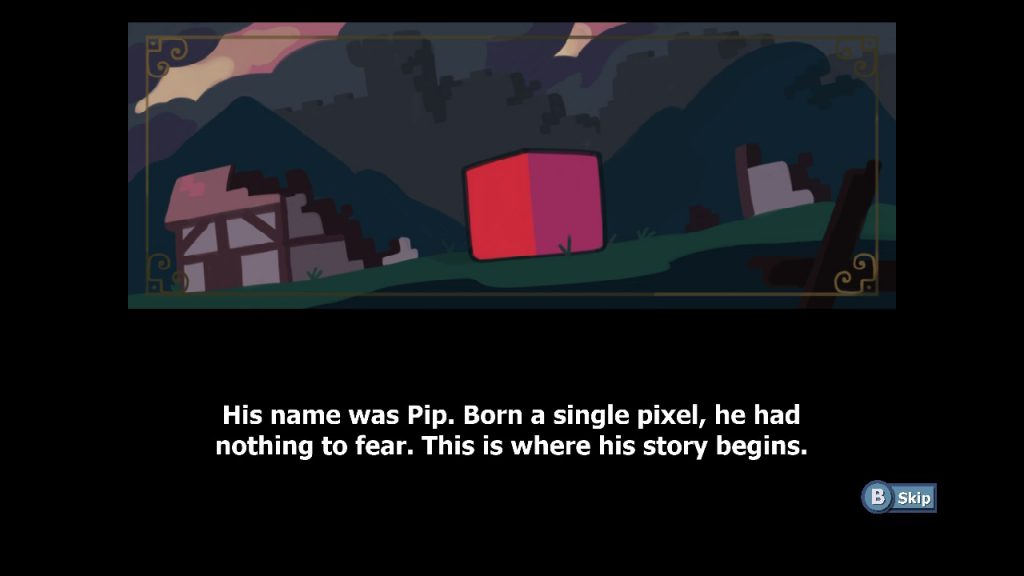 That’s quite the poker face you’ve got there, Pip.

Adventures of Pip takes place in the faraway Pixel Kingdom, where more pixels means a higher social standing—neither of which protagonist Pip has the luxury of enjoying. As a single pixel, there isn’t much that Pip can do aside from hop about and act as a footstool to those with the luxury of actually having feet. All of that changes, however, when the Pixel Kingdom comes under attack  Queen DeRezzia, a magical, menacing matriarch with the ability to harvest the power of the Bitstream—the world’s life essence—who begins turning the kingdom’s once-detailed citizens into single pixels and makes off with the princess. Undeterred by this turn of events, Pip immediately sets off to save the princess, stop DeRezzia, and show just how powerful a single pixel can be.

The story is not at all the focal point of this game, but I figured that I still needed to give credit where it was due. Despite the fact that this game is over five years old at this point, I can still say that I’ve never seen a story quite like this one. A pixel-based hierarchy is an extremely clever way to showcase the societal imbalances caused by class systems, and the harmless, tongue-in-cheek way that Adventures of Pip approached the subject is worth some praise. Then again, I might be digging a bit too deep. 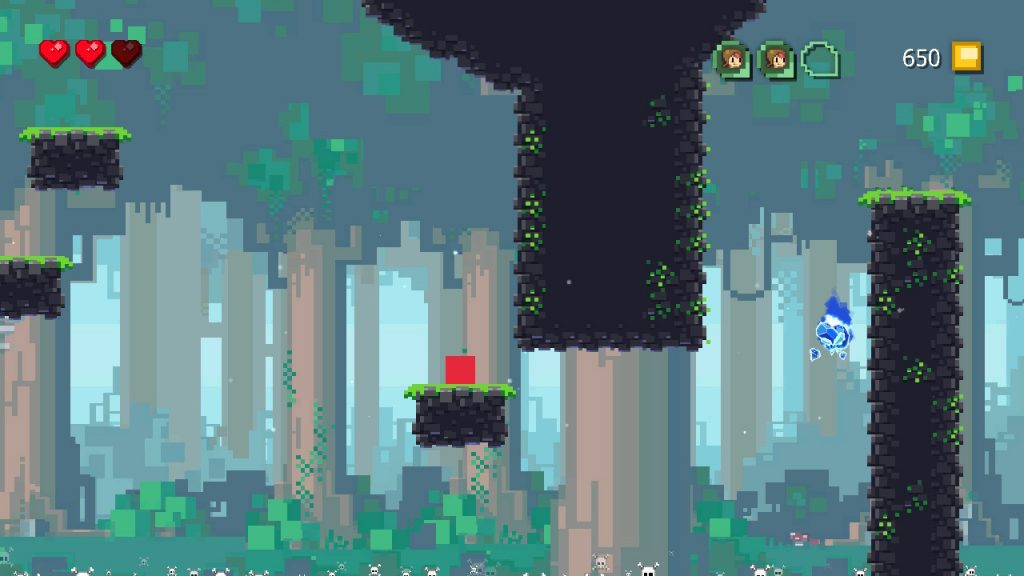 No need to duck, here!

Despite being your “average platformer” in many ways, Adventures of Pip isn’t without its own uniqueness. The game’s levels largely center around Pip’s ability to utilize one of three different forms—1-bit, 8-bit, and 16-bit—in order to tackle challenges as they come his way. Based on how the game is set up, you might think that a more detailed Pip would be a stronger pip. Ironically, however, more pixels doesn’t mean more power. Rather, each of Pip’s forms have their own unique strengths and weaknesses—the light 1-bit pip can float through the air and fit into spaces, 8-bit pip can wall-jump, and 16-bit pip has the power to crush obstacles in his path with a mighty swing of his sword.

What Adventures of Pip‘s gameplay presents to players is enjoyable, easy to get into, and provides just enough challenge to place the game in the middle ground of difficulty levels. The game also adds an additional level of difficulty based flexibility by placing collectibles in the form of trapped villagers within each level—with villagers becoming increasingly difficult to rescue as the game progresses—as well as shops for the players to buy basic consumables and permanent upgrades. Adventures of Pip may not have an actual difficulty toggle, but it’s certainly easy to tweak the difficulty yourself, thanks to everything that the game offers to players. 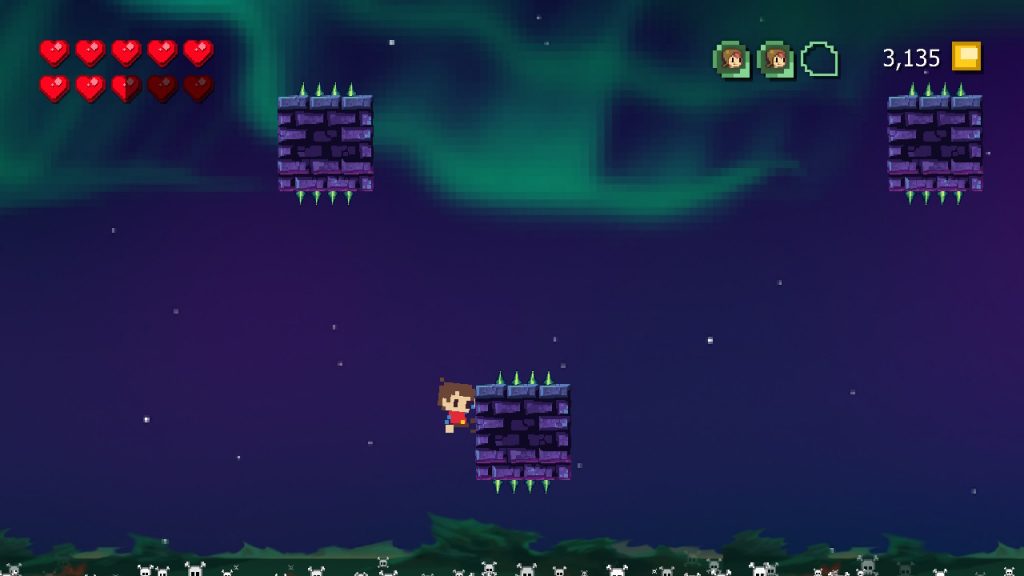 Whatever you do, don’t look down!

Telling a game that initially released half a decade ago what I think that it could have done better kind of feels like a moot point. But you can bet that I’m still going to do it, anyway! Personally, I thought that the form-switching mechanic in Adventures of Pip was a brilliant idea. I’ve always found the idea of a game utilizing multiple styles and resolutions, and, aside from Evoland and a handful of Super Mario games, I can’t think of any that I’ve played that make use of that. I do think that this game could have done it better, however.

Despite drastically changing in visual appearance, Pip’s pixel-powered variants basically boil down to being three different weight classes. Giving different characters—or different forms of the same character—varying levels of mobility isn’t bad at all. I’d actually say that it’s a normal thing to do. But the fact that it’s the focus of Pip’s three forms is disappointing. There are so many different things that could have been done to ensure that each of the characters felt truly unique; you could have given Pip powers based on his current form (Pong for 1-bit, Super Mario or Mega Man for 8-bit, etc.), or even made different enemies weak to different forms. What the game offers of each of Pip’s forms is implemented well, but it still falls short of what I was ultimately hoping for. 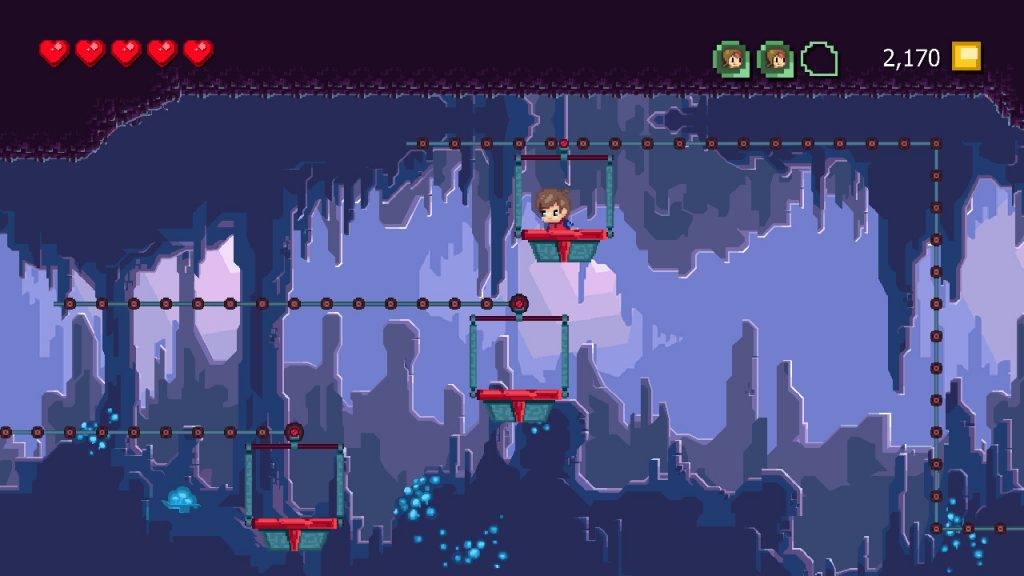 Floating rail carts have ALWAYS been the epitome of safety.

On the surface, Adventures of Pip is a good example of level-building fundamentals done right. Consisting of almost 50 unique levels which span across five different worlds, anything that you would need to make a competent platformer—from world-specific gimmicks to hidden areas, to boss battles—is not only implemented but implemented well. And yet, despite this, I still found myself feeling as though something was off.

If I’m being honest, I don’t know exactly what it is that I could point to that made me feel as though this game was missing something. As I’ve already said, it had all of the platforming basics down pat. But that actually might have been part of the problem. I’ve said that I love a good, basic, platforming experience, and that’s still the case. But you can still be a “basic” platformer and go past solely using platforming basics. Even with varying gimmicks and level layouts, everything started to feel the same after a while. I could take the easy way out by saying that it felt that way because it was a platformer, and platformers can only do so much before they turn into something else, but I don’t think that’s the case. I think that, had Adventures of Pip had added just a tad more creativity to their approach on level design, they could have made something much more exciting—and it’s sad to see that they stopped just short of doing that.

It isn’t difficult to see why Adventures of Pip is still making the rounds on various consoles, despite its age. It’s a fun platformer with a unique gimmick that not only adds to the game but celebrates some of the many forms in which video games have come. It’s not the very first game that I would recommend to Switch-owners. However, it’s still one that I would suggest to those looking for new platforming worlds to explore.

Quite an Outing When the review code for Outlast 2 made its way to Hey Poor Player the reactions from the staff were genuinely hilarious. The game was turned…