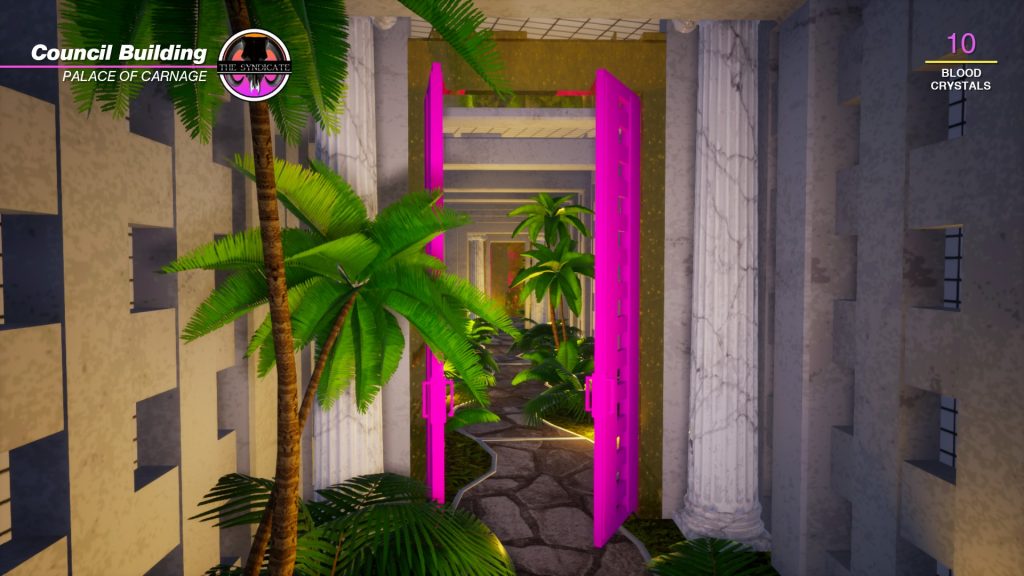 I’ve always preferred Vaporwave over Synthwave, despite the latter’s accessibility. At first glance, Synthwave is just easier to understand; Vaporwave is itself a mystery, the starting and ending points having the enthusiast trying to figure out how it’s different than slowed down 80s tracks and specific assets/brands with an explosion of discovery in between the journey through that cycle. Miami, 80s/90s vibes, marble statues, Fiji water, consumerism, pastel hues, Japan, and a yearning for a place that’s never existed both barely scratch the surface and fully encompass the genre; new content simply rehashes the old, a genre that relies on what’s dead and gone to breathe life into it. It’s absolutely fascinating, yet understandable why it hasn’t caught on in the mainstream in the way other retrowave subgenres have.

I say this because to understand Vaporwave is to understand Paradise Killer, as it perfectly encapsulates the essence of the genre in both body and soul. 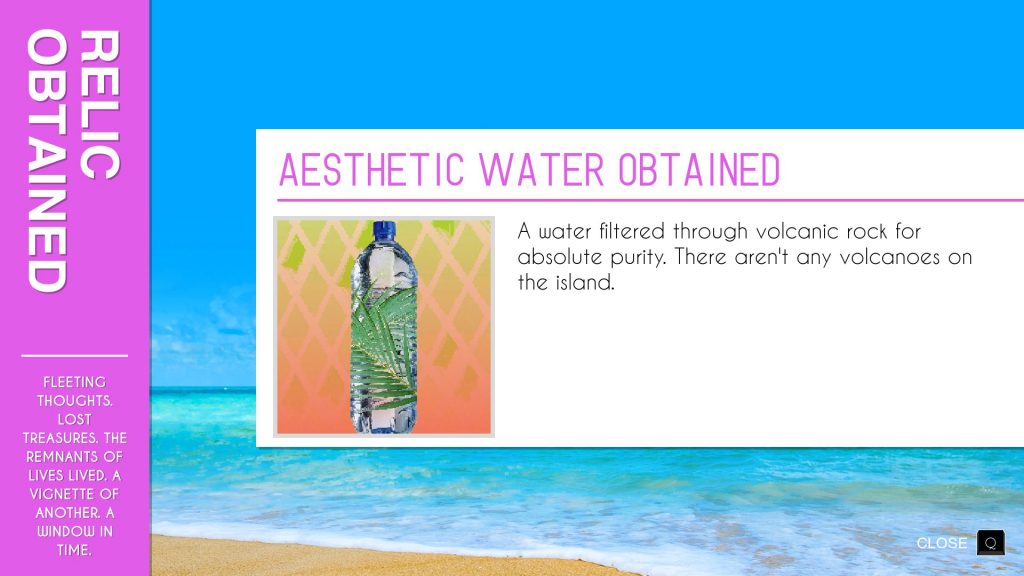 The first title developed by UK-based indie studio Kaizen Game Works and published by Fellow Traveller, Paradise Killer is an open-world investigation game with visual novel elements. With vibes akin to Phoenix Wright, Hotel Dusk Room 215, and the madness that comes from Suda51’s brain, Paradise Killer tries something new in the tried and true detective genre, adding free-roaming exploration mechanics that last as long as the player deems necessary. Perhaps the developers say it best: “It is up to the player how much evidence they collect, what order they do it in and who they choose to accuse of the crime. The game does not judge or ask the player to retry to get a ‘correct’ answer. The player investigates as they see fit.”

The story is complicated, so I’ll sum it up as best as I can. Players take on the role of Lady Love Dies, the “investigation freak” who was exiled in the 13th island cycle. After three million days and in the final moments of the island’s 24th cycle, she’s called out of exile to investigate the horrific murders of the entire Council, as her former profession makes her perfect for the job and her exile ensures her innocence. As she wanders around Paradise searching for clues and speaking to the few remaining souls left on the island, she uncovers evidence and testimony that become her truths; when it comes time for the trial, it’s up to the player to decide whether or not to turn those truths into facts or twist them into a different reality. 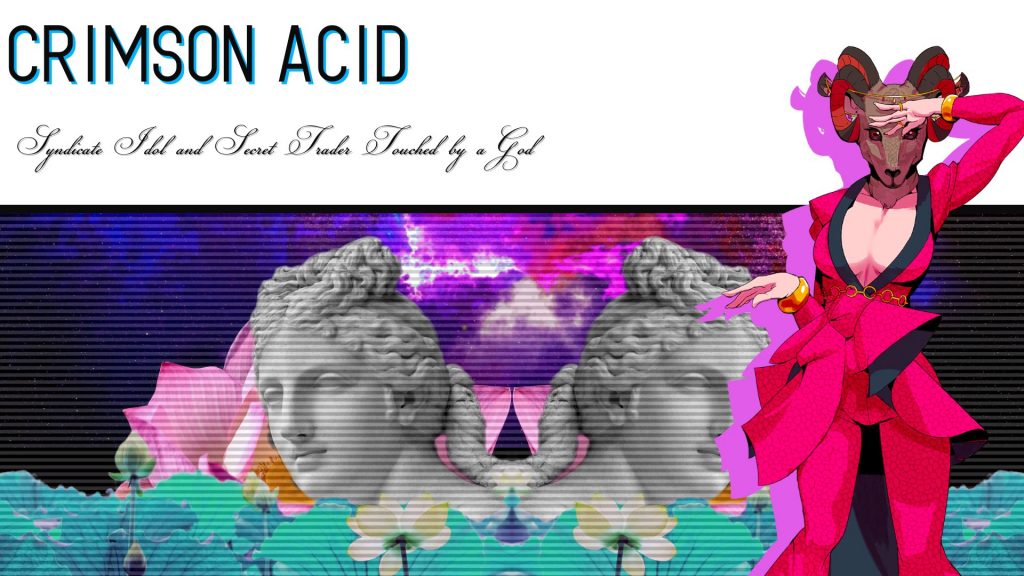 It’s a lot to take in at first, but over time the world of Paradise Killer does become possible to comprehend. With the help of her computer, Starlight, Lady Love Dies organizes notes, case files, people of interest, and even a history of the island and important dates/times pertaining to the crime to be referred to at any time. The remaining Syndicate members (the group of people just below the Council) are also very helpful when it comes to divulging information, answering all of Lady Love Dies’ queries, pointing fingers at other Syndicate members, and, if you’re lucky, romancing the formerly exiled investigator.

Paradise Killer’s lore is mind-bogglingly rich — the Council and the Syndicate work together to bring the gods to live with them. They’ll need homes for this, so they captured people from their world and brought them to the island, which exists in a fringe dimension of sorts. The Citizens, as they’re called, toiled endlessly to build the pyramids to house the gods, one of four residing within their pyramid’s walls. The pyramids completed, the citizens now work in the forge or on the farm and worship gods that aren’t their own to feed the celestial beings the psychic energy generated through worship. Their reward? To be ritualistically slaughtered at the end of the island’s life-cycle, ushering in the end of the island and the Council and Syndicate’s migration to the next. 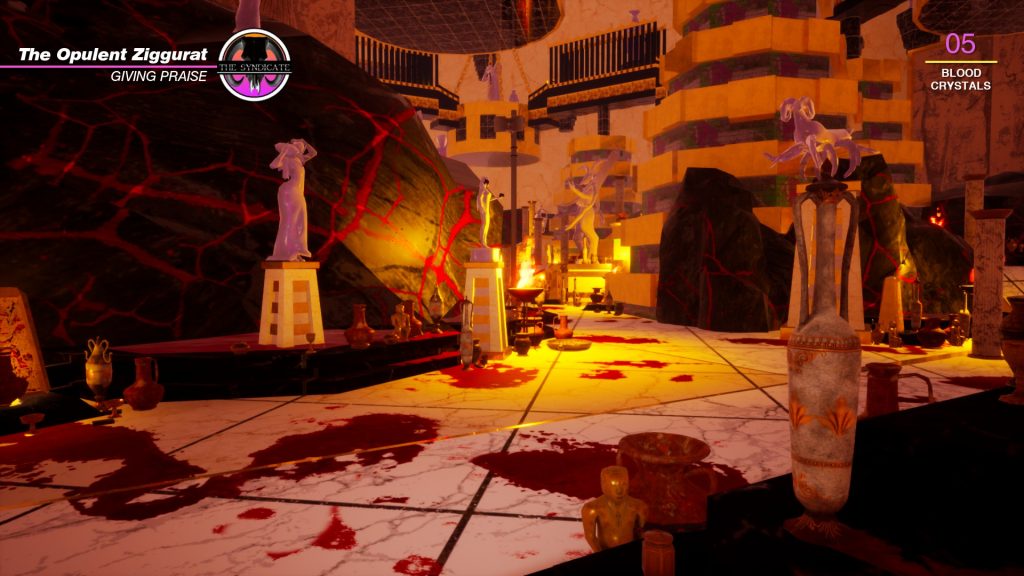 Unfortunately, The Crime to End All Crimes occurred, and the Council was horrifically murdered in the middle of ferrying the Syndicate over to the next island (not to be confused with the ritualistic slaughter that occurred just before, they’re cool with that one). And while the remaining members of the Syndicate believe they have the culprit detained, Judge, the embodiment of impartial justice, believes something is wrong. That’s why, after three million days in exile, she’s called you back to Paradise to investigate before the guilty party can progress to the next island — the Perfect 25.

With me so far? No? That’s okay. The truth is, there’s so much more lore to be found within Paradise Killer, and the game does a decent enough job of explaining it. Just be prepared to either take a ton of screenshots (I took 305) or miss some flavor text — it’s inevitable considering all the moving parts. 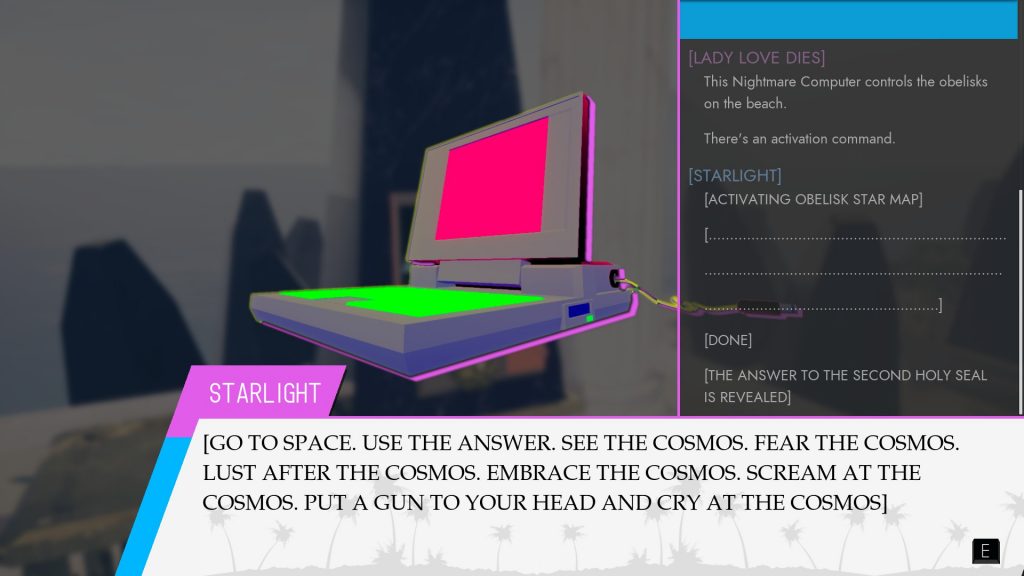 Controls are simple enough, as WASD moves Lady Love Dies, space is jump, and shift is sprint. Hold down control to see points of interest, interact with “E”, and scan the area for hidden collectibles with “Q.” You’re warned repeatedly that the game does not automatically save — you’ll need to find phone booths for that, which double as a fast travel service that cost one blood crystal. As this is an investigation game, you’ll spend the majority of your time exploring, and with clues that can be obtained in any order and death an impossibility, players are quite intuitively encouraged to roam freely across a near-empty Paradise.

Speaking of gameplay — Paradise Killer does have visual novel elements, but you’ll spend more time running and jumping around to find blood crystals, relics, and clues. It’s worth noting that the Steam version does not feature achievements at the moment, so collecting is at the player’s discretion. While this would normally deter me from exploring too much, I was intensely motivated to explore every nook and cranny of this impossibly vast island; it’s beyond incredible how much there is to discover, each item meticulously logged in Starlight’s system. 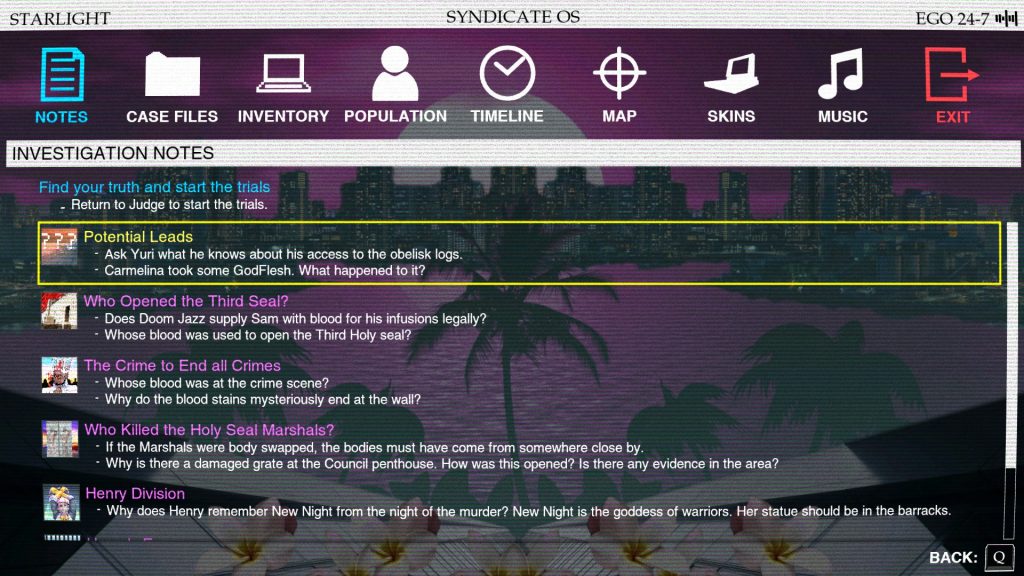 It’s this player-directed progression that I found incredibly rewarding in Paradise Killer, and that was in large part due to the island’s design. Paradise is a joy to explore, the Vaporwave aesthetic so wonderfully crafted without feeling to cliche. The standard elements were there, certainly — you couldn’t throw a stone without hitting a palm tree — but nothing felt out of place. In fact, despite the convoluted plot, Paradise Killer did what few Vaporwave games have achieved, which is make sense of the aesthetics and give them some cohesion. There are palm trees because they’re on an island, the pyramids are present because that’s where the gods live, and everything is marble because the island’s architect is aiming for a beautiful, perfect Paradise. Where Vaporwave is usually an aesthetically pleasing arrangement of specific assets with no real connection, Paradise Killer gave them purpose in their placement and meaning in their existence, which is so different and so delightful.

I haven’t even touched on the music of Paradise Killer, which mostly comprised of Future Funk and City Pop. While I was missing the more classic, stereotypical Vaporwave sounds, it’s undeniable how phenomenal the soundtrack is. I think my favorite on the list is probably Paradise (Stay Forever), but they’re all absolute bangers. There is a hint of Phoenix Wright to the sound as well — is Investigationwave a thing? Because that’s definitely a genre I can get behind, with Paradise Killer’s OST at the forefront. 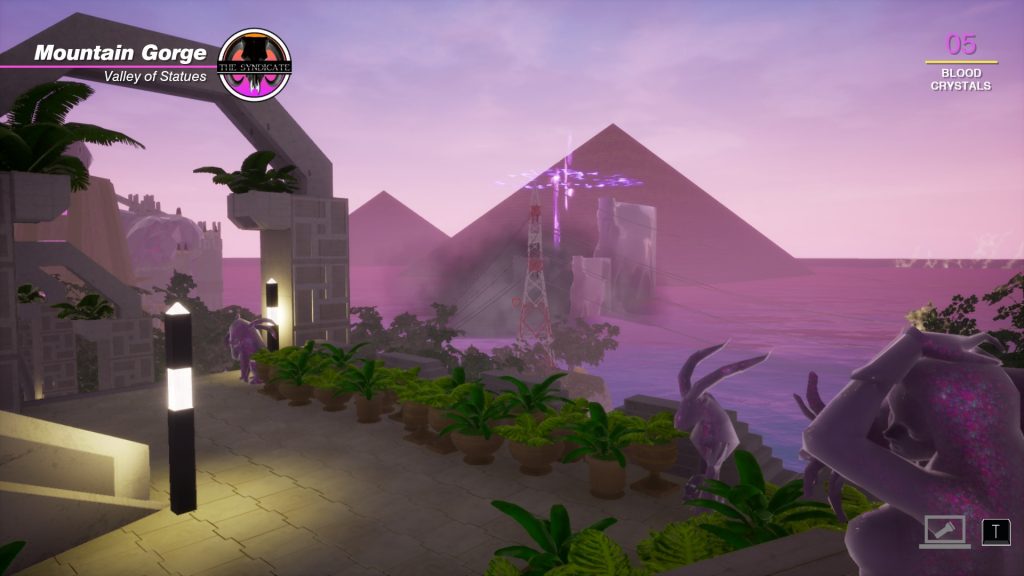 The actual trial in Paradise Killer, just like the investigation, is self-directed. Here’s where the game adds something fresh to the genre — you can start the trial at any time, and as long as you have enough evidence, you can pin any particular crime on anyone. You can try to spare your friends by omitting key information at critical junctures, or you can tell your truths and let the chips fall where they may. You can even end the whole thing and scapegoat a particular character from the get-go. Although one ending is certainly more fulfilling than the others, all answers are technically correct as long as you have the evidence to back up what you’re bringing forward, a complete deviation from murder mystery games where you have to unravel one concrete storyline.

In that sense, Paradise Killer perfectly embodies Vaporwave. Those new to the genre might look at an image of a pyramid with symmetrical palm trees against a particular pastel pink background and go “this is all Vaporwave is?” while those deeply familiar with it might have a hard time explaining that it’s more than meaningless visuals and slowed down 80s songs. The beauty of both is that, as long as a particular aesthetic is loosely adhered to, you get as much or as little out of the genre as you’d like. It’s more about what you feel — that depressed yearning for a place that doesn’t exist while being oddly nihilistic about life and filling that void with specific consumerist nonsense while simultaneously exposing the underlying issues with consumerism/capitalism — that tries to be conveyed through the genre. You can induct the first guy you see and be done with the game, or you can immerse yourself in a lore-dense world and still come out feeling like there’s gotta be more to it, confused when there isn’t. That’s Paradise Killer, and that’s Vaporwave.

As much as I love Vaporwave, I stand by what I said earlier — it’s simply not as accessible as other retrowave subgenres, and that might affect Paradise Killer’s accessibility as well. Additionally, there is a massive amount of complicated lore that bombards players from the get-go, which may further discourage some players. With that being said, this is by far one of the most creative, most satisfying, and most appealing games I’ve played all year, firmly sitting at the top of my GOTY 2020 list. It adds a unique twist to the murder mystery genre, the innovation taking a page out of Vaporwave’s style while simultaneously providing context to the otherwise disjointed yet beloved Vaporwave assets. Paradise Killer is an ingeniously aesthetic investigation game that absolutely belongs in your library; be sure to pick up this gem as soon as possible.

Editor’s note: This review is based on a review copy of Paradise Killer provided by the publisher. 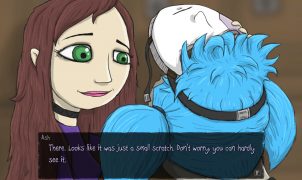