No pain — please, not again 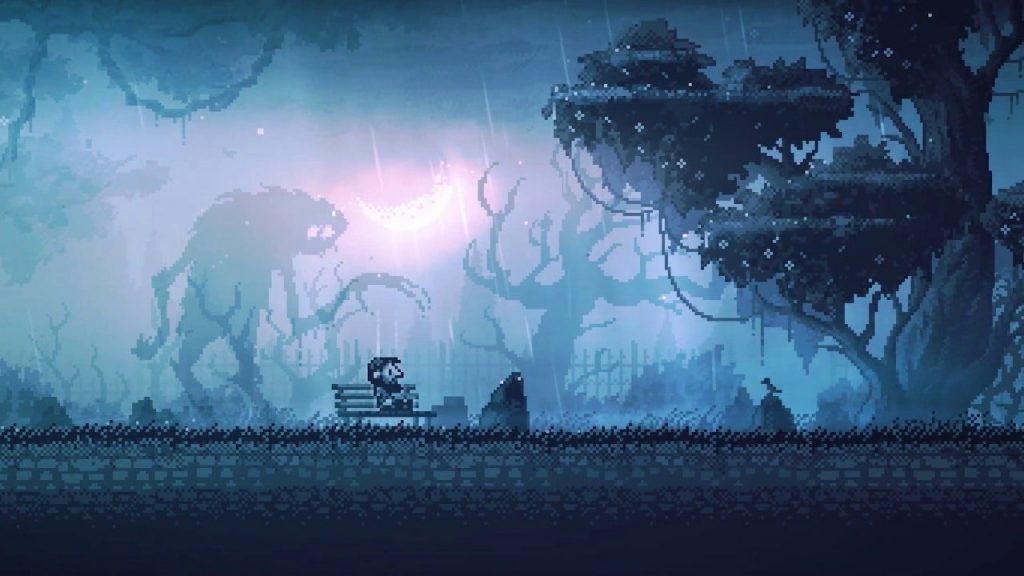 Just when it seems like we’ve seen everything the platformer genre has to offer, a gem like INMOST comes along. A creepy, atmospheric narrative told through the perspectives of three different characters, INMOST tackles tragic topics like depression, pain, regret, and grief wrapped up in a three to five hour puzzler. Featuring hauntingly beautiful pixel art settings with stunning use of color and intriguing animation, INMOST caught my eye, captured my attention, then absolutely captivated me, and I became deeply invested in uncovering the mystery behind this dark land full of sorrow.

Developed by Lithuanian-based team Hidden Layer Games and published by Chucklefish, INMOST was originally released on Apple Arcade on October 11, 2019 with its Switch and PC versions released later on August 21, 2020. Hidden Layer Games stated that INMOST was influenced by the hit RPG Maker title To The Moon, the 2011 8-bit tear-jerker with an overwhelmingly positive rating on Steam. With an introduction like that, I knew I had to get my hands on INMOST; whoo boy did I have no idea what I was in for. 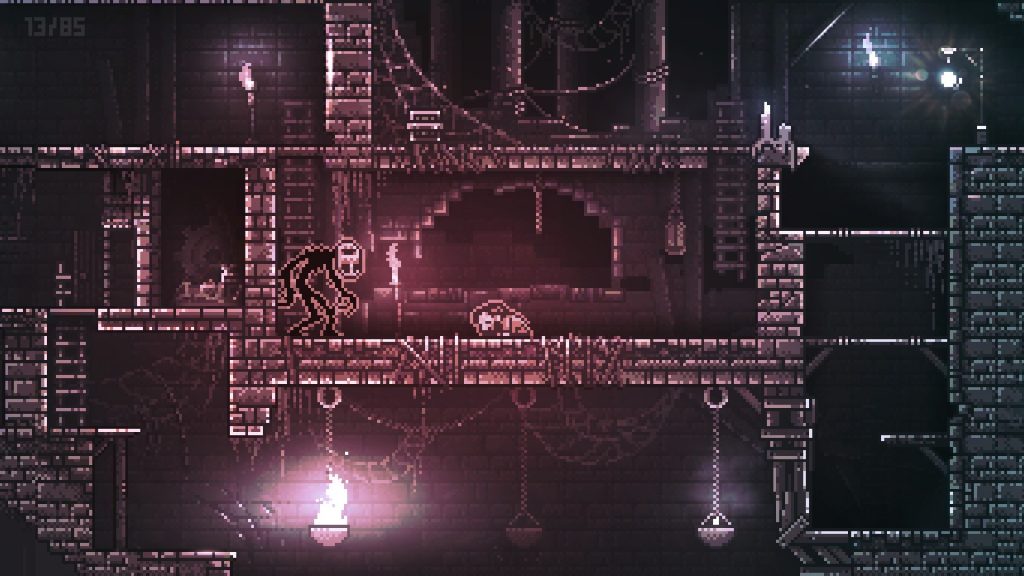 INMOST follows a young girl, an old man, and a quick-footed knight, their stories starting separately but ultimately intertwining. Set against a dark backdrops of a gloomy house and grim castle, the characters must solve puzzles in order to push their narratives forward. Each character feels different while playing — the little girl is incredibly slow and can’t jump high, the old man gets plenty of air but is practically defenseless against attacks, and the knight, although incapable of jumping, can use a grappling hook to get around as he slices and dices enemies. All three have fascinating, albeit horrific, gameplay and stories that left me on the edge of my seat, concerned for the characters and what was unraveling before my eyes.

Controls are simple on paper, but depending on your keyboard, you may want to use a controller for this one. Arrow keys move the character, space jumps, E interacts, and control rolls, which, again, reads fine, right? But as each character plays different, they each have a different control scheme, so that only works for the old man. The little girl simply has roll removed so no worries there, right? Well, the knight unfortunately takes a second to get used to, and since the controls are so briefly explained, it’s easy to forget them while switching back and forth between characters. It’s easier when on a controller, but for some reason using a keyboard caused nothing but confusion (and, oddly, pain to my left pinky finger). 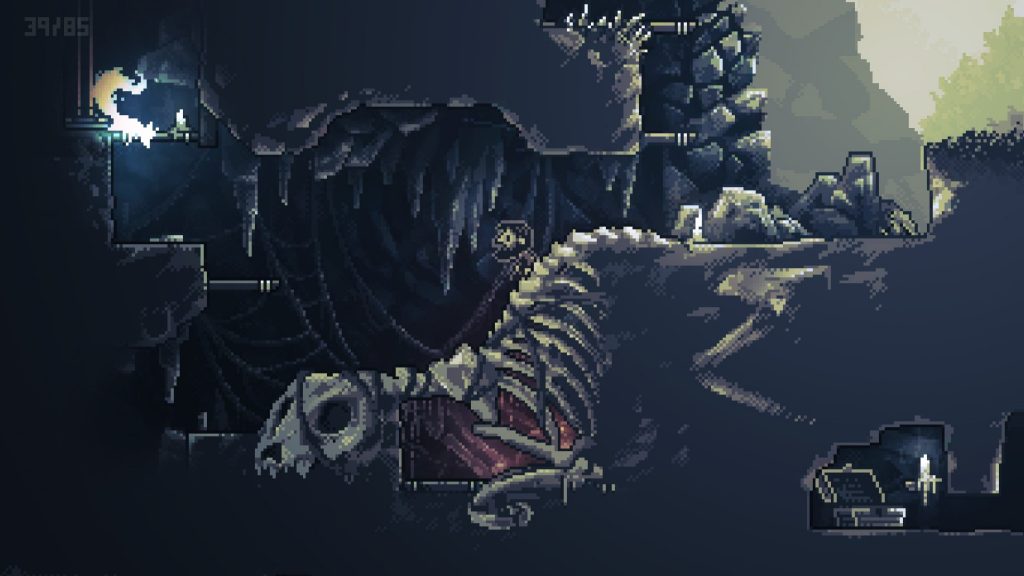 At first glance, INMOST’s graphics may look a little monotonous and bland, but the clever use of color was wonderfully nuanced and certainly helped set the tone of a creepy castle. Additionally, the subdued color palette was accompanied by incredibly active use of shading, so even though everything was a particular color of “spooky,” the feeling was conveyed even better through the dramatic changes in lighting and mood. The animations, although a bit drawn out in certain areas, were fluid and graceful, which made for both beautiful and eerie movements. Coupled with music that was gently scary in some parts and dramatically intense in others, INMOST was surprisingly cinematic for a 2D side-scroller, a feat in and of itself.

Although gameplay is broken up into three parts, players will likely spend most of their time playing as the old man in INMOST, as that’s where the most exploration and puzzles happen. The way INMOST handles this is fascinating — there are certainly clear paths that players recognize as the course to take, but there are also a plethora of trap doors, false walls, hidden floors, and more waiting to be discovered. Backtracking is not only necessary but encouraged and even made easier, as some of those uncovered pathways reconnect earlier areas to the newly explored ones, making stumbling into a secret room a major feature that’s majorly rewarding. 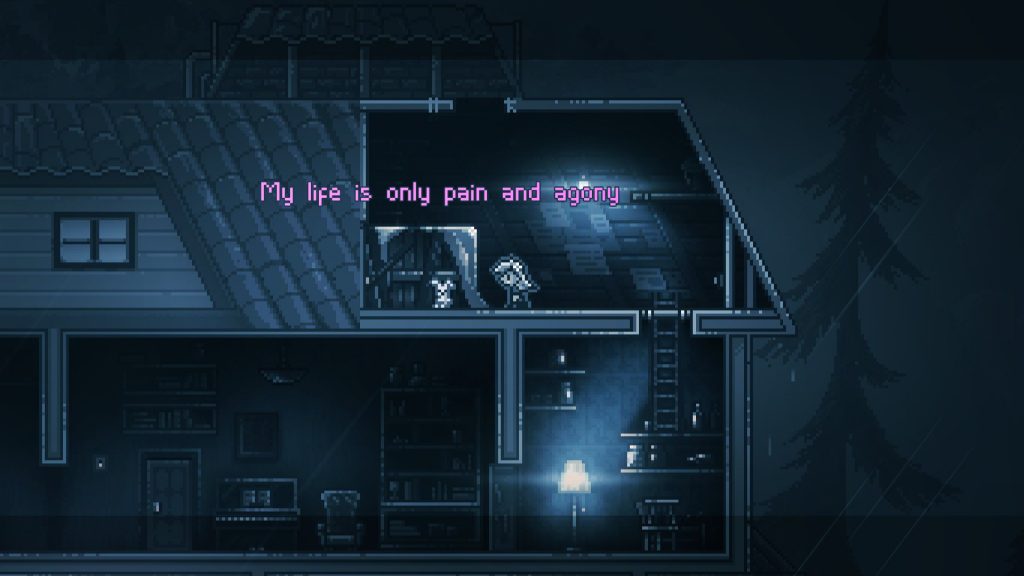 INMOST may strike players as a horror title, and within the first hour of gameplay, there’s some truth to that claim. There are a few jumpscares, especially in the old man’s section, but aside from that, it’s hard to say that the game is horror in the traditional gaming sense. There’s intensity, sure — especially when being chased by elegantly terrifying creatures — but horror? Not really. Instead, I feel the word “terror” is more fitting — without going into too much detail, the little girl’s experience is incredibly concerning, and at one point left me on a cliffhanger with a handful of shocking details that were so back to back, I was conflicted on which one left my mouth agape.

While some players may get frustrated with the puzzle mechanics dragging out or the absolute slowness of the little girl’s movements, INMOST is a shining example of how indie games can offer astoundingly deep stories that take on topics less explored. The core of INMOST’s narrative is how pain can break us, but how it can also heal others if we shoulder theirs. A story of love as much as it is a story of grief and despair, INMOST seemingly holds all its cards close, revealing its hand at the last possible moment, everything falling perfectly into place at the end. In fact, it almost demands a second playthrough to discover the parallels missed the first time around, the pieces connecting in surprising — and often sad — ways.

What initially sold me on INMOST was the notion that it was inspired by the considerably more light-hearted To The Moon; while I wasn’t expecting such a tragic tale about pain and suffering, the developers definitively recaptured what made their muse great. Realistic depth of characters, discussion of topics oft overlooked yet extremely relatable, and a compelling narrative made for a captivating journey that will stick with me for a long time. INMOST will likely fall on my top 10 list of games released in 2020, and, as long as you have a controller and don’t mind the pricetag for a five hour experience, I’m confident you’ll feel similarly.

Editor’s note: This review is based on a copy of INMOST given to HeyPoorPlayer by the publisher. 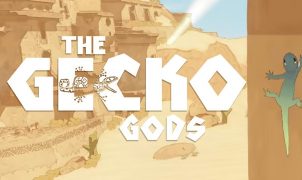 The Gecko Gods Climbs To PC and Switch Next Year

It Takes Two Review: Honey, we’re shrunken shells of our former selves I don’t know who needs to hear this, but marriage takes work. Actually, I do know who…