Is It Wrong to Try to Pick Up Girls in a Dungeon? – Infinite Combate Review (PS4) 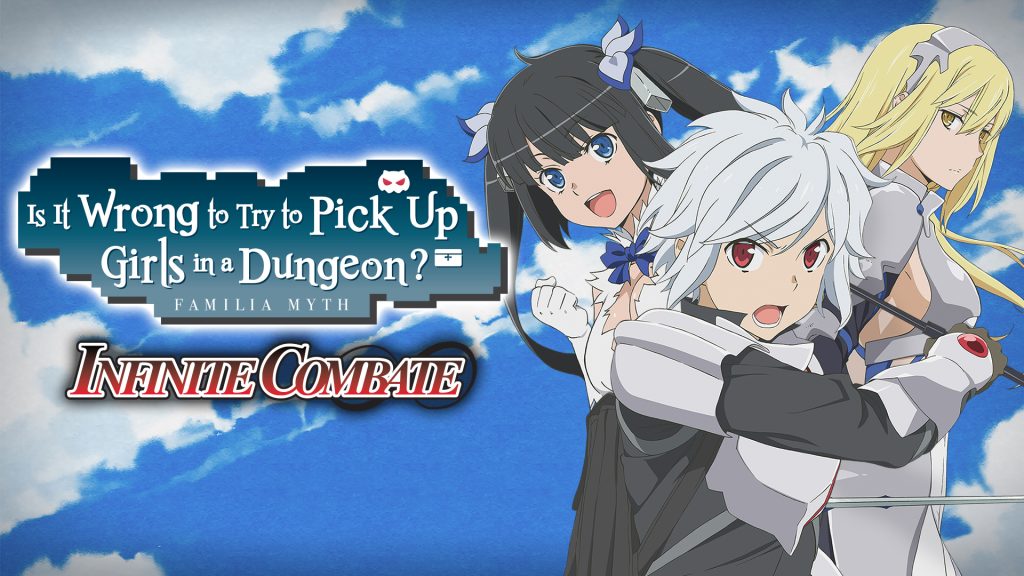 Anime-inspired video games tend to get a bad rap. While it’s easy to find people excited to play a game inspired by a show that they love, you’ll also find plenty of detractors that sometimes equal or surpass the number of actual supporters. Personally, I don’t favor such negativity in most situations. There are plenty of anime-inspired games that do incredibly well—with titles based on Dragon Ball Z and Sword Art Online being some of my favorites—and even many of the games that are “just okay” still don’t deserve the level of criticism that they often get. Sadly, I can’t say the same thing for Is it Wrong to Try to Pick up Girls in a Dungeon? Familia Myth Infinite Combate.

As much as I want to defend this game from the typical scorn that anime-inspired games get, there’s not much that I can do that wouldn’t compromise my own integrity. I wouldn’t call it objectively terrible or anything like that. I did legitimately have some fun playing through it. However, when sizing everything up, there’s no getting around how shoddily crafted a good amount of this game is.

All in the Familia 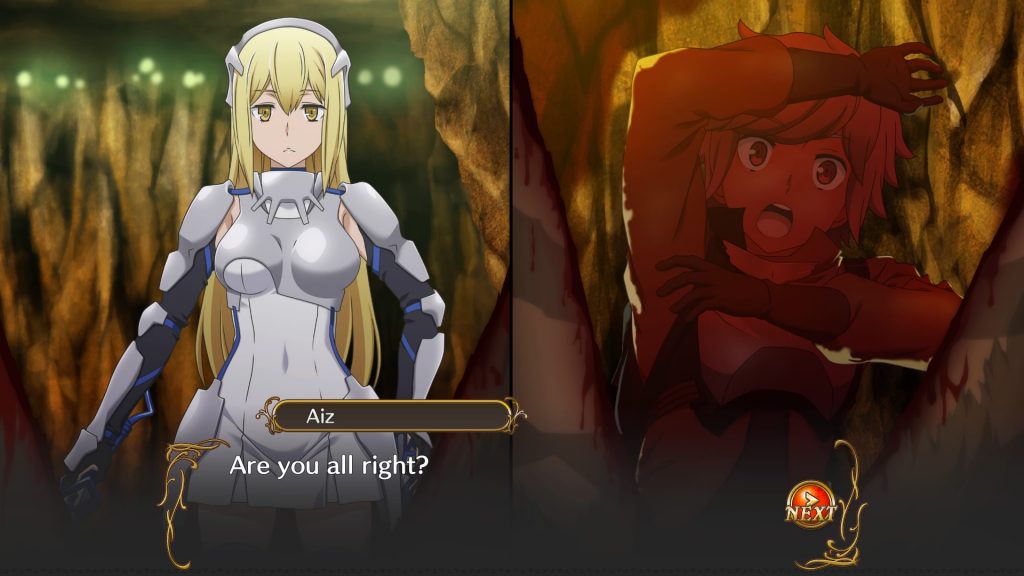 Infinite Combate roughly follows the plot of the first season of the anime. Following some introductory dialogue created to help get the player used to gameplay, the story begins with Bell Cranel, a Level 1 Adventurer with almost no experience under his belt, and the only member of the Hestia Familia, finding himself being saved by none other than the Loki Familia’s Aiz “Sword Princess” Wallenstein just seconds away from being gored to death by a minotaur. From there, the narrative hits all of the major points of the anime’s arc—Bell’s sudden increase in strength, the deepening of his relationship with Aiz, and the introduction of Lili and Welf—and ends with the climactic battle against the Black Goliath.

One major quirk that a lot of anime-inspired games seem to share is that they take for granted that the majority of people playing the game have either watched the series or, at the very least, know a little about it. Personally, I think that that makes sense; anime and manga that are big enough to be made into games typically have too much going on in them to be able to comfortably fit into a single title. Is it Wrong to Try to Pick Up Girls in a Dungeon? does not, however. Spanning a total of 13 episodes (plus an OVA), the first season of the show is something that you could easily binge in a single afternoon. And, given how brief this story is, that’s a problem. 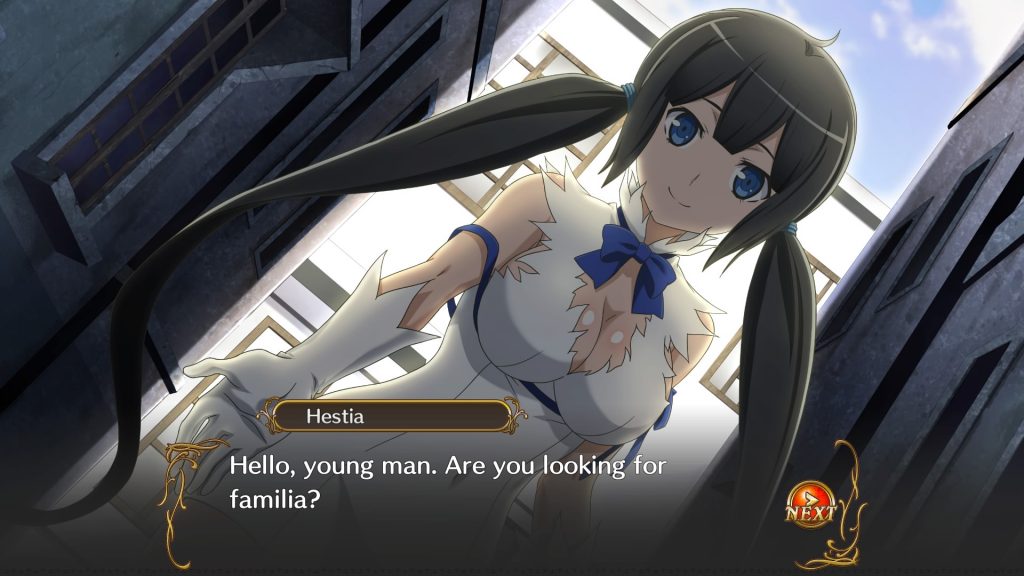 I don’t have a problem with the anime having short seasons. What I do have a problem with is this game compressing the story as much as possible in spite of the fact that there isn’t an overwhelming amount of material to work with. I get that most people already know exactly what’s going to happen in this game, and that, because of that, the devs didn’t want to stretch things out longer than they needed to be. But we’re talking about MAGES., here—the people that were responsible (at least in part) for phenomenal visual novels like Steins;Gate and Chaos;Child. I expect a certain quality of storytelling when it comes to this developer. And, while the people working on behalf of MAGES. may differ from those that worked on their VNs, Infinite Combate‘s story being made as barebones as possible left a bad taste in my mouth.

To the Dungeon with Ye! 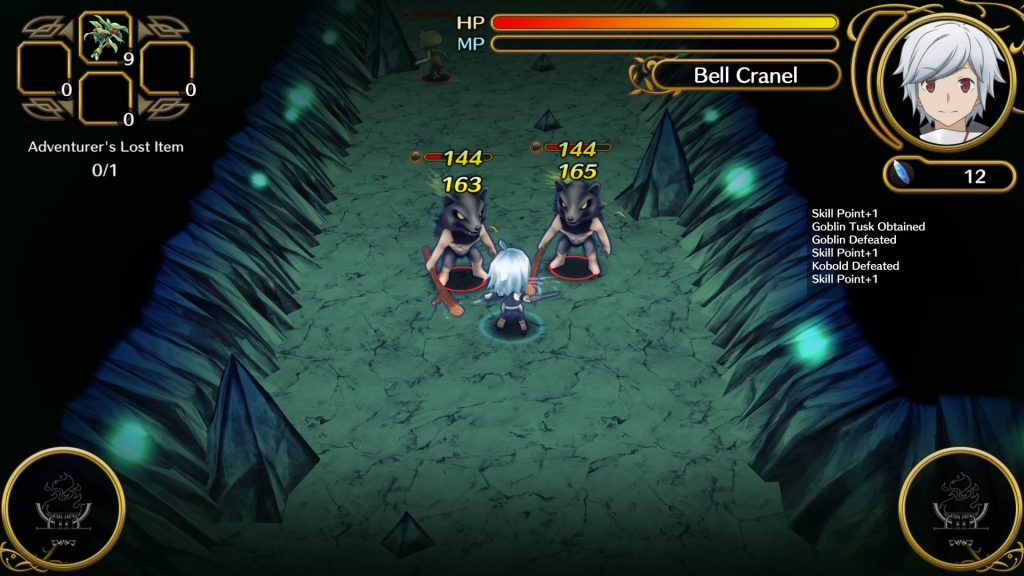 Is it Wrong to Try to Pick Up Girls in a Dungeon? is literally a series made to be turned into a dungeon-crawler. With the series itself focusing on things like venturing through a massive dungeon, completing quests, and literally leveling up and raising stats, there’s so much potential to create an amazing, dangerous, and rewarding dungeon-crawling experience—and MAGES. took that and made it into the most basic dungeon-crawler that I’ve played in a long time.

Despite consisting of 16 chapters—10 dedicated to Bell and 6 to Aiz—it’s impossible not to feel like the entirety of the game’s story is still in tutorial mode. Although quests do vary—with players needing to collect items, slay monsters, or make it to a certain floor—it feels as though everything is incredibly pre-scripted. Some of this I understand. Because this game follows a pre-written story, it wouldn’t make sense to let players increase stats or levels willy-nilly, and the skill system that replaces normal character growth is serviceable. But not giving players any quests that task them with traveling more than 3 floors at a time, and relegating most quests to a single floor? Come on, that’s not cool. 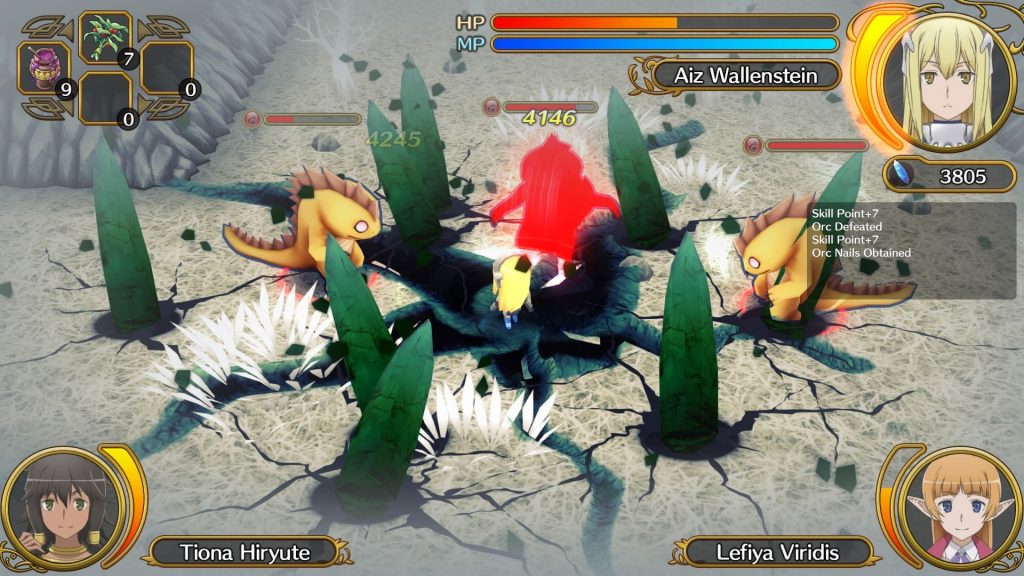 Make sure to save your skills for when you really need them!

Combat is equally simple. Rather than anything cool and complex, the battle system in Infinite Combate is relegated to being little more than a basic hack-and-slash. The full capacity of what a player character can do is very limited—consisting of only light and heavy attacks, a ranged magic attack, a self-buff, and a dash/backflip button—with the player’s repertoire ultimately being very unbefitting of such an action-packed series. Players are essentially relegated to performing the same combo over and over to vanquish enemies, and hit-and-run tactics are often the only viable option for bosses and bulkier foes. The total lack of unique attack combos, parrying, or even a simple defend command, really brings down the overall quality of the game’s combat. I will say, however, that if you can get past all of this, it makes for a decently fun, albeit mindless, monster-slaying, loot-collecting experience.

Parties are a big thing in this series. In the anime, parties work together to keep each other healthy and stay alive while in the dungeon. In the game, party members are basically glorified accessories. Rather than physically joining Bell or Aiz on their adventures, party members aid players by providing them with a consistent passive buff (such as increased attack or item drop rates), and can be utilized to perform powerful AoE attacks that are slow to charge, but incredibly strong. These mechanics are incredibly useful and very much appreciated, but they shouldn’t be relegated to your party members. The passive skills could easily be implemented via some kind of basic accessory mechanic, and, while I’m A-OK with party members having AoE attacks, it makes zero sense to not at least have them follow you around. The way this is implemented comes across as incredibly lazy, and it’s really disappointing. 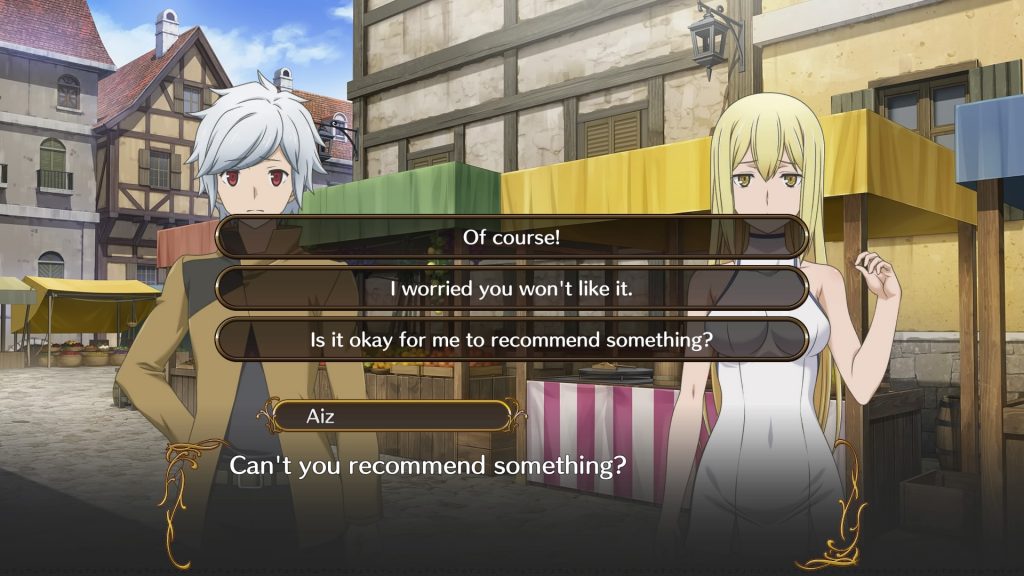 The dates are worth the wait(s)!

Perhaps the most baffling thing about Infinite Combate is its Extra Mode. After beating the game, players are immediately taken to the “Extra Chapter,” which serves as the post-game content. Ironically, Extra Mode is everything that the normal game should have been. Players are allowed to freely explore a number of differently themed dungeons during this time, with new quests revolving around reaching certain levels of each dungeon being presented as well. These dungeons are, as expected, way tougher than anything in the main game. It’s incredibly easy to die. But it’s also surprisingly fun. Even with the limited combat system, I found myself genuinely enjoying the challenge that these extra dungeons provided. I also found myself questioning why this system didn’t exist earlier on in the game.

New dungeons were something that I expected from Infinite Combate‘s post-game. The addition of a new genre, however, was not. While carving your way through swaths of enemies in the bonus dungeon, players are able to rack up Date Points which can be exchanged for additional, all-new, story content. Both Bell and Aiz have 10 different characters that they can spend time with, with each subsequent date requiring more Date Points. Not only are these events amusing and well-written, but they also create further incentive to go back into the bonus dungeons. Honestly, I’ve got nothing to complain about here. The dungeon/date cycle created in Extra Mode is very enjoyable, and I found myself equally looking forward to both of its elements. I’m not sure how a game managed to partially redeem itself solely through post-game content, but Infinite Combate sure proved that it’s possible.

Is it Wrong to Try to Pick Up Girls in a Dungeon? Familia Myth Infinite Combate has a lot of problems, but it’s nowhere near being the worst game that I’ve ever played. If you’re looking for a content-rich dungeon-crawler, then you’ll probably want to pass on this one. There are better dungeon-crawlers out there. However, if you consider yourself to be a fan of the series and really want to experience it in a new and unique way, then picking this up still might be worth your time.