Bound in the wind and I’m in the Windbound 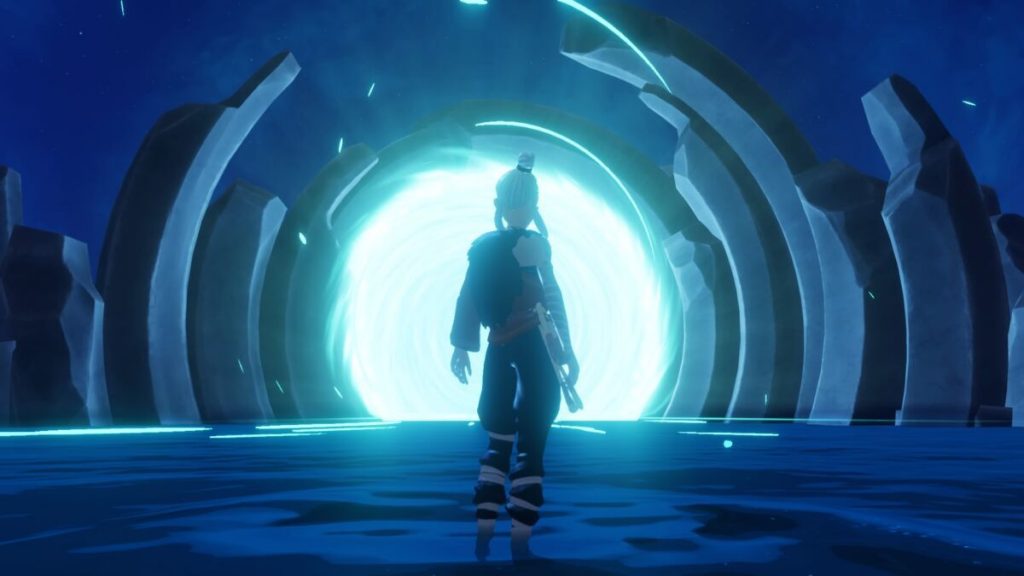 Like many of you, I was lulled into a false sense of security about Windbound thinking it would be “like Breath of the Wild meets Wind Waker.” And while, in concept, it certainly is that delightful-sounding mashup, in practice it is a hell of a lot harder. Those looking for a peaceful time island-hopping as carefree as the breeze, abandon all hope ye who enter here — this game is not for you. For those looking for a survival game that challenges in a similar vein to No Man’s Sky… read on.

Developed by 5 Lives Studios and published by Deep Silver, Windbound follows the story of Kara, a seafaring adventurer who was lost beneath the waves one stormy night. Alone and without her people, Kara must make her way across the sea, stopping alongside scattered islands to forage, hunt, craft, and do whatever it takes to survive. In her quest to be reunited with her group, she stumbles upon mysterious structures that emanate a soft blue glow, calming the seas to allow passage to the next area. Unlocking the mystery of these structures while navigating windy waters and living off the little pockets of land, Kara learns about herself, her abilities, and a history long-forgotten. 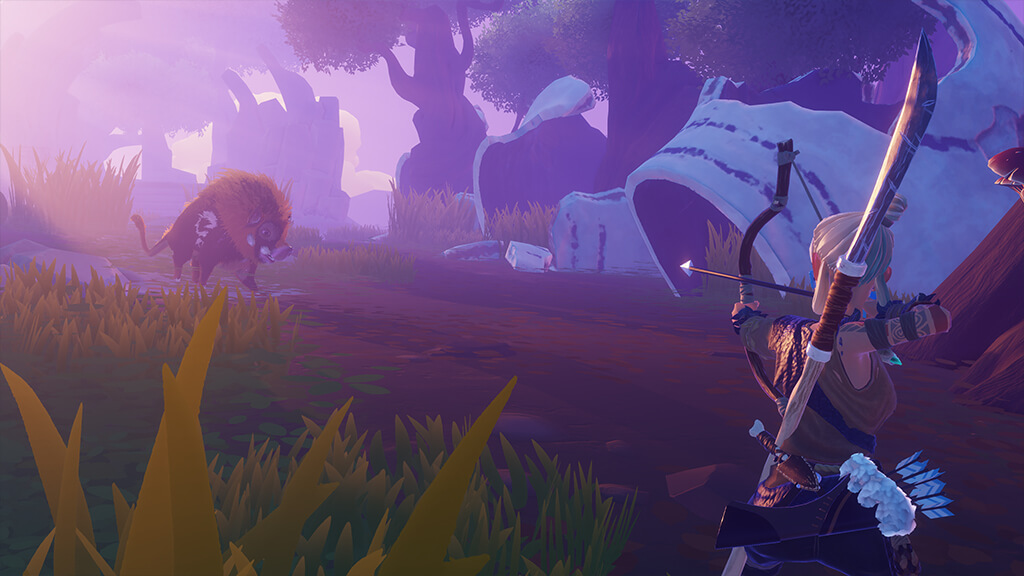 Kara’s story immediately reminded me of the novel Island of the Blue Dolphins’ protagonist, Karana, who was based on the real life “Lone Woman,” or the last surviving Nicoleño tribe member. Stranded on California’s San Nicolas Island for 18 years, the Lone Woman survived off what little the land gave her, hunting and foraging alone for nearly two decades. In truth, I think Karana had it a bit easier than Kara, as nature’s balance seems a bit more forgiving than Windbound’s.

Windbound offers two modes — story and survival — and the developers suggest the former over the latter. The differences between the two are small on paper but vast in practice, as death in story mode means you lose your boat and are brought back to the beginning of the chapter, while death in survival is essentially permadeath save for the ability to keep what’s in your hand. Players who die in survival mode are transported all the way back to the beginning of chapter one with practically nothing, so unless you’re a big fan of brutal survivalist gameplay, I’d suggest story mode. 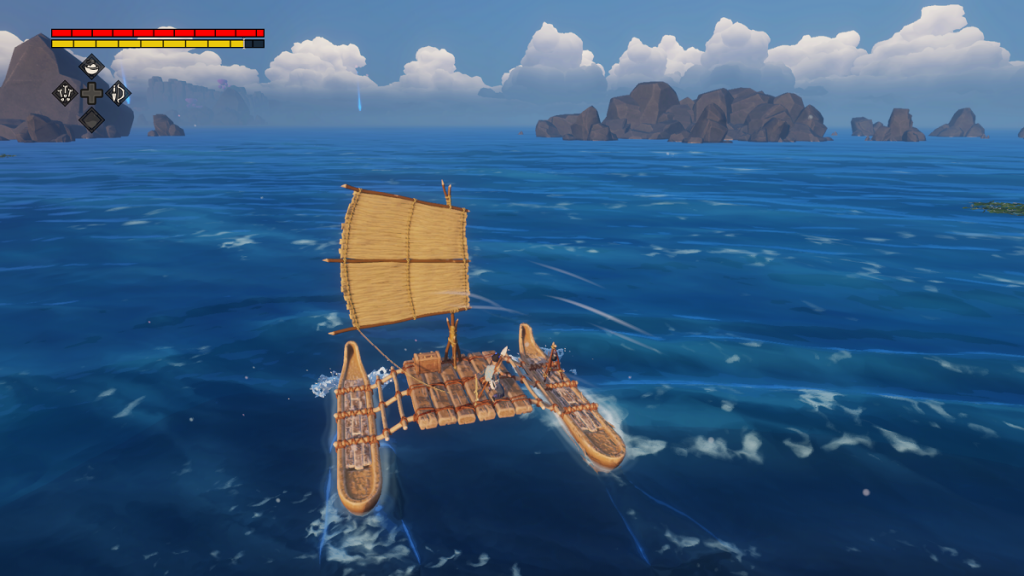 Windbound opens up on Kara, washed ashore on a small island with little more available than rocks and grass. Through crafting, she can build a small boat to maneuver over to the next island, where she can forage and hunt for food. After collecting more resources, crafting more items such as bags, weapons, and a better boat, Kara is able to take on the challenge of visiting three shrines in the area to unlock the region’s portal, learn about her past, and move onto the next set of islands.

Controls are simple enough, and I’m happy to report this is one of the few games that doesn’t actually require a tutorial to get the swing of things. Windbound may pride itself on its difficulty level, but the control scheme doesn’t contribute to that for the most part, so job well done there. The only real issue is when you’re locked on an enemy and want to toggle to a different one; aside from that, controls-wise, Windbound is smooth sailing. 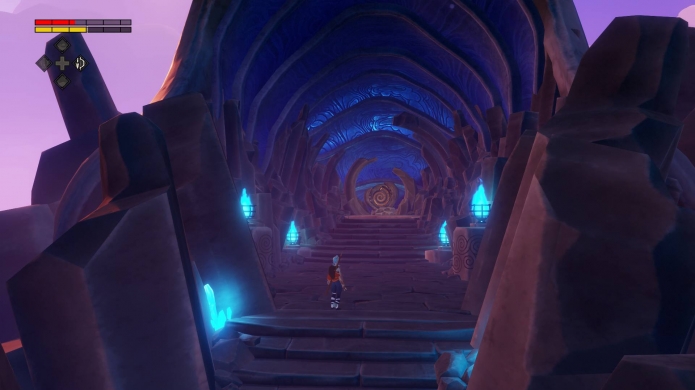 The aesthetics of Windbound speak for themselves — there’s a warm, inviting whimsy to the islands that make exploration feel approachable. The use of color is energizing and soothing at the same time, with no real sense of urgency coming from anything within nature. Since the islands are procedurally generated in a similar sense to No Man’s Sky, this means that, over time, the islands tend to blend together and the surrounds can become a bit stale, but by that point players are hopefully shifting their focus to finishing up the storyline and only venturing around insofar as to gather resources to survive.

Speaking of the storyline, it’s told in a non-verbal, slightly cinematic way that gave me slight Shadow of the Colossus vibes. Nothing is ever spoken in Windbound, rather experienced and felt through Kara’s eyes. Of course, this means that there are often more questions than answers, and in Windbound’s case, it’s up to the individual player to use their imagination to fill in some blanks, so depending on the person, this can either spark colorful backstories or promote frustration. Regardless of which camp you fall in, the murals will, no doubt, at least interest you.

When it comes to seafaring, you are indeed bound by the wind. At first, rowing from island to island is a simple affair albeit plenty of work; after you gain access to more crafting techniques, you’re able to craft a vessel fit for Poseidon himself, with tons of room to store food and resources. Unfortunately, this is where the going gets a bit rough, as the bigger the boat, the bigger the sail, and sails require wind to function. When the wind is going the direction you’d like to go, it’s literally a breeze and an extremely satisfying experience. When the wind is going literally any other way, you’re dead in the water without some weird janking on the controller. It’s incredibly frustrating to the point where it’s best to stick to the beaches and wait for the wind to turn.

Another frustrating experience was Windbound’s survival mechanics being at odds with the exploration factor. Windbound’s aesthetics are so inviting that I wanted to explore every inch of the area, but with hastily dropping food and stamina meters, I felt punished for venturing too far off any given island. Stocking up on food for lengthy journeys is impossible, because food deteriorates so quickly that any hunting you’ve spent days on becomes moot. Taking a wrong turn while looking for the next shrine (sometimes hard to see) can easily mean a death sentence if you’re not careful, especially in the first few hours. As stated earlier, if you’re looking for a survival game, this probably sounds appealing, but if you’re thinking more easy-breezy exploration, this ain’t it.

Windbound strikes me as a victim of overachieving — it wants to do so much that it ends up tripping over its own feet. Is it a survival game? Yes. Is it an exploration game? Also yes. Is it a crafting game? Yes again. Is it a story-driven game? Yep. Does it do any of those things perfectly? No. You need to explore to move onto the next area, but you’re tethered in place because the survival mechanics are a little too overbearing. Topped off with a more nuanced story told through a repetitive loop, Windbound’s balance is less a scale and more a see-saw, swinging from one side to the other with the player clinging on for dear life. It’s still a solid experience and one that I would recommend, but carefully, and only to fans of the survival genre. If you’re looking for another Breath of the Wild or Wind Waker, breeze past this title. If you liked No Man’s Sky but want a different setting? Set sail for Windbound, as this might just be your jam.

Full disclosure: This review is based on a review copy of Windbound provided by the publisher. 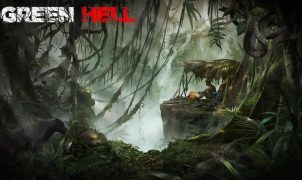