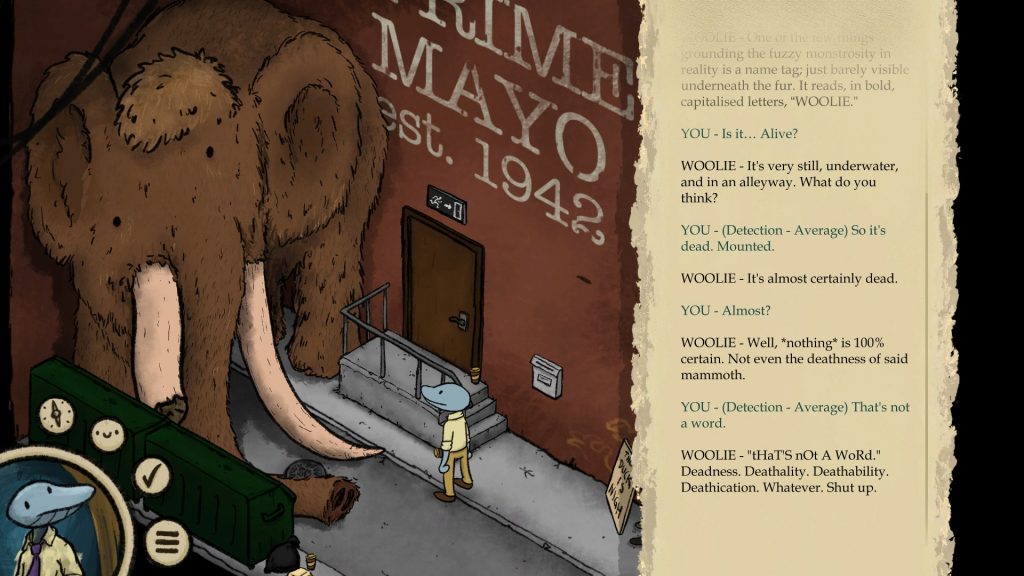 2019’s Disco Elysium absolutely rocked my world; a video game that plays like a tabletop RPG where you can argue with the “DM” about your (often lackluster) choices. And, upon insistence of my teenage brother, I recently played West Of Loathing, giggling at the ridiculous writing all the way through. I constantly lament that I need to pour more time into both but, like your standard thirtysomething, where am I supposed to find the time? Is there a chill RPG out there with deep tabletop elements and silly writing that still provides a solid — yet short — gaming experience?

I’d be lying if I said I wasn’t at least a little bit surprised that a short, scintillating title about underwater stand up comedy is one of the better RPG experiences of 2020; what’s more surprising is that it’s only a demo, yet it feels like a complete game despite its brevity. I didn’t expect to be blown away by a game about a clam searching for jokes, but I also didn’t expect to be stuck at home for five months during a global pandemic. Life comes at you fast. 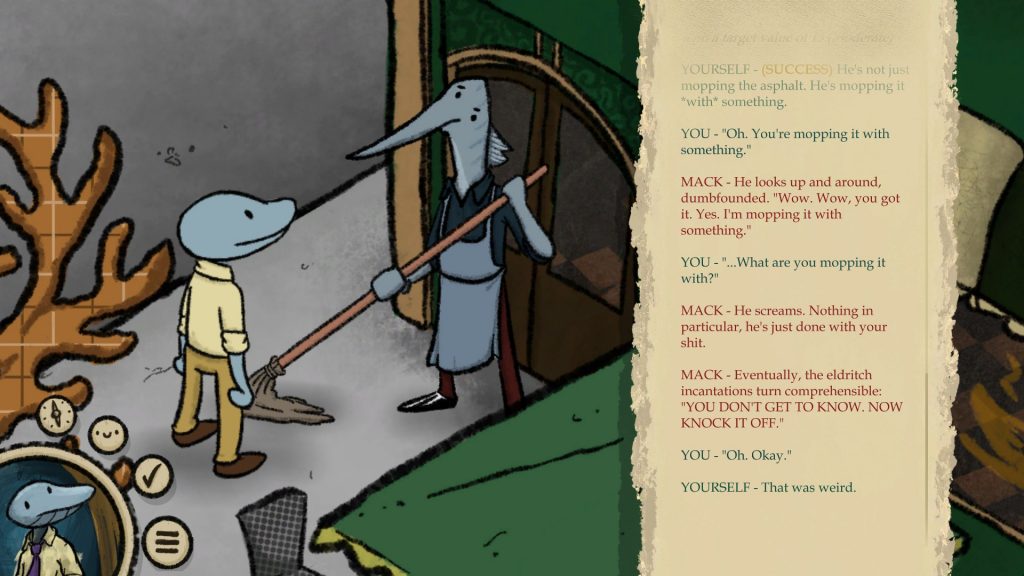 As previously stated, Clam Man 2: Open Mic is a demo for the full game, Clam Man 2: Headliner; in turn, Clam Man 2: Headliner is a sequel to the original Clam Man. I haven’t played the first game (although I’m about to pick it up after this experience), but the developers do a pretty good job of telling you what you need to know to move on with the next installment. In other words, players need not backtrack unless they would like to.

Clam Man 2: Open Mic opens up on the titular character, Clam Man, who is filling out a form for his job as a mayonnaise salesman. Said form doubles as an intro for the player and a simple stats sheet, where players can set the strengths of four different abilities — aquadynamics, improv, detection, and self-awareness. Be sure to choose your stats carefully, as some dialog branches will not unlock if your ability’s level is too low, and in the demo there’s no observable option to level up your stats. 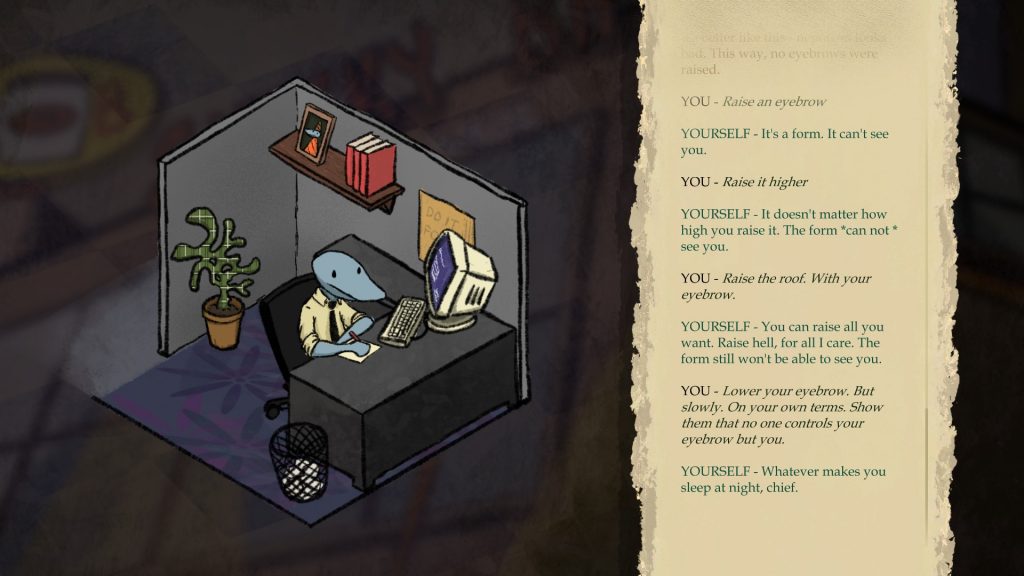 After Clam Man has filled out his form properly, his friend Pete wanders over to his cubicle to ask what makes a burger a burger, and I immediately started to dislike him when he said it was the pickle (what? Nasty). That’s not why he came to talk to you, though — an elevator shaft suddenly became empty after the elevator skyrocketed to the heavens and through the roof, and Pete is curious about a mysterious extra floor that had remained secret until this recent turn of events.

Depending on your stats, you and Pete can either try climbing down the shaft or just walking downstairs to stumble upon a comedy club. Pete is visibly excited, and you are visibly a main character, so it’s up to you to snoop around and see how you can help get the struggling comedians ready for opening night. If you can get the news out somehow and come up with some material, they’ll even let you perform as the first set! Excited? Too bad — Pete has already given you the day off to prepare, and since you’re bored to tears selling mayonnaise, you decide to take the opportunity for a career change. 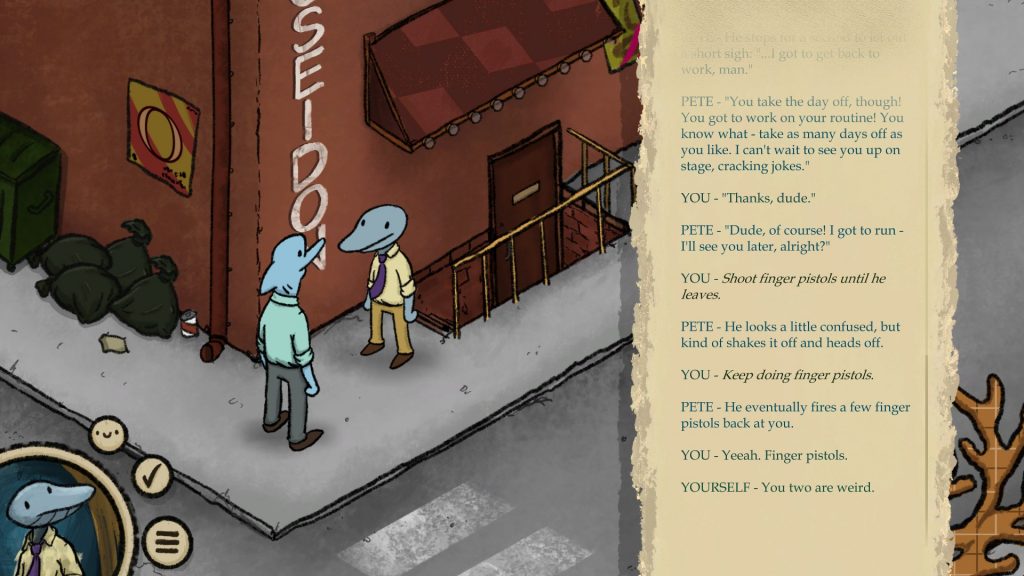 And just like that, it’s up to you to wander the underwater streets in search of material (and perhaps a journalist) to get ready for the evening. By pointing and clicking, players help Clam Man interact with the world around him, talk to its inhabitants, and generally just unwillingly participate (mostly observe) the goings on of your small town.

If you’ve played Disco Elysium, Clam Man 2: Open Mic’s UI is already incredibly familiar to you. Clam Man will walk around town with certain items being highlighted if they can be interacted with, but all dialog happens off to the right side of the screen in a descending manner. Depending on the situation and your stats, an ability check will be prompted, with passing yielding positive outcomes and failing… well, not so much. 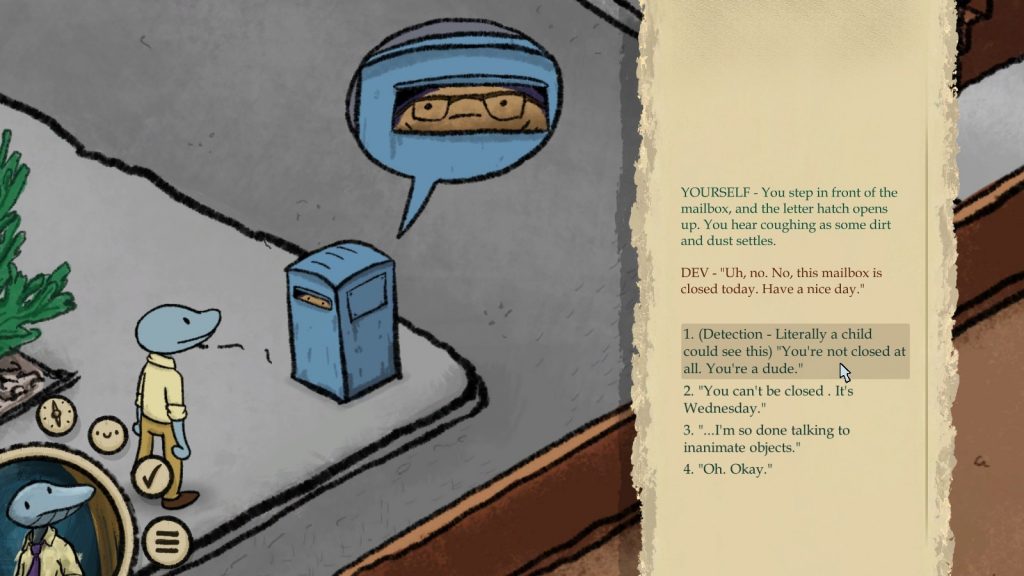 For example, as you go around town looking for joke material, you can encounter several other aquatic citizens who require assistance in one way or another. You can do the hefty legwork for them, spending more time and energy on completing these fetch quests, or you can perform ability checks to bypass them. For those who are unfamiliar with tabletop RPGs, this means that you have a number you must exceed to “pass” — i.e., 12 — and rolling higher than that will make that happen. If you rolled a 9 on an improv check but already had +5 since you put points into your improv stat, congrats — 9 + 5 = 14, which is higher than 12 and therefore passes the ability check. You can now successfully lie to a child, speak with a stuffed wolly mammoth, or convince a sea creature that time doesn’t exist. The surface of the water’s the limit, really.

Now, if you’ve played West of Loathing, you might recall how silly the writing was, and Clam Man 2: Open Mic delivers on the laughs in a similar way while still being unique. Where West of Loathing was practically deranged for the sake of it, Clam Man 2: Open Mic has some fairly sophisticated yet ridiculous humor that slightly changes depending on your stats. The personality is a bit self-deprecating, which definitely fits in with stand-up comedy. I didn’t guffaw so much as just caught myself smiling and screen-shotting nearly everything I read, all of the writing hitting the right notes and making for an entertaining hour. 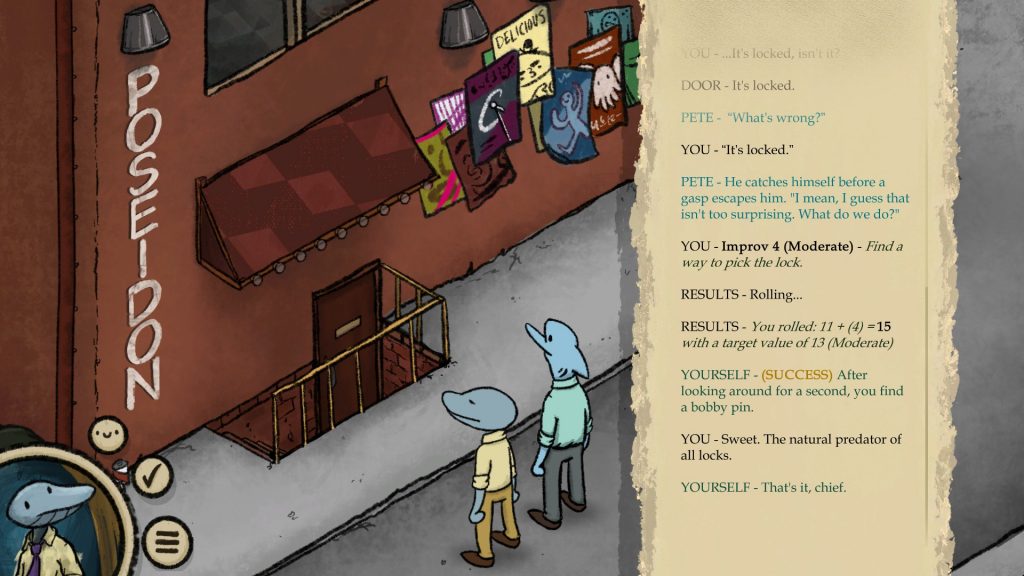 Speaking of the timing, it really only did take about an hour and some change before I was up on stage, practicing the jokes I had collected from my random quests completed throughout town. While I passed the ability check on one of them, I failed the other two, awkwardly bombing my way through my very first set. I didn’t feel let down about it, though, as the entire playthrough only took me an hour so I felt like I could try again if I truly wanted to. And since I could choose different stats on the next playthrough, this meant I’d get an entirely new experience — albeit a brief one.

I think that was the best part about Clam Man 2: Open Mic — it’s a demo, but it feels like a complete game. Sure, I’m itching to get my hands on the full title, but the fact that it ended on a satisfying note made my brain happy, like it had concluded and I could move on with my life. And with plenty of busy gamers clamoring for shorter titles that they don’t have to invest months of time into, Clam Man 2: Open Mic offers on its own a great gaming experience — for free — to that subset of adult gamers that just don’t have the time. When it comes to concept, content, and commitment, Clam Man 2: Open Mic sets them up AND knocks them down. A rare treat! 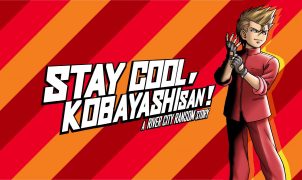 We got trouble right here in River City I’m so torn. I really, really wanted to love Stay Cool, Kobayashi-San!: A River City Ransom Story. A Kunio-kun spin-off on the…