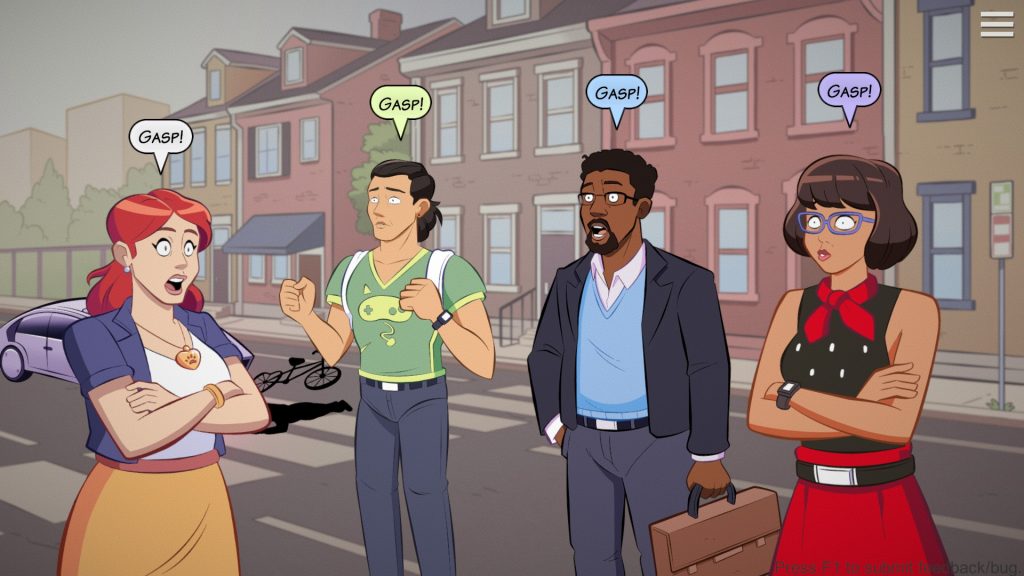 I’ll cut to the chase — I wanted to play CRASH: Autodrive because it’s a murder mystery that gives off dating sim vibes and totally put Markiplier in as a character (I’m onto you, “Streamer Kyle from Hawaii who relocated to LA”). 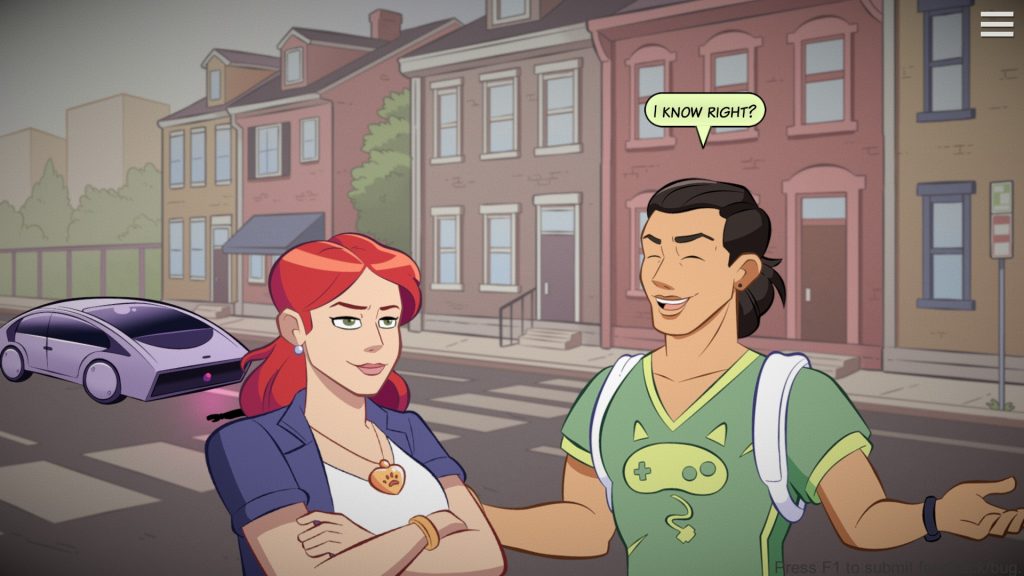 Currently in development and self-published by Studio Nightcap — an indie game studio founded by industry veteran David Shaver (The Last of Us Part II, Uncharted: The Lost Legacy, Titanfall 1 & 2) — CRASH: Autodrive promises to be a short title for busy gamers without skimping on the murder mystery goodness. Slated for release in Spring of 2021, there’s already a solid playable demo available on Steam for those interested in knowing the players of this little whodunnit, where even the car is a suspect.

CRASH: Autodrive opens up on Emily Knight, a young woman on her way to a job interview that could give her a shot at returning to college after being forced to drop out some time prior. Hailing a self-driving cab — the norm in 2027 — she steps in and sees a man tapping away on his laptop. They sit in silence as two other passengers, a bespectacled woman and a gamer guy, are picked up on the way to their destinations. As Emily goes over her interview questions, the car turns down a quiet side street. Suddenly, the car abruptly stops, and the airbags violently deploy, causing some of the passengers to be knocked out. What happened? 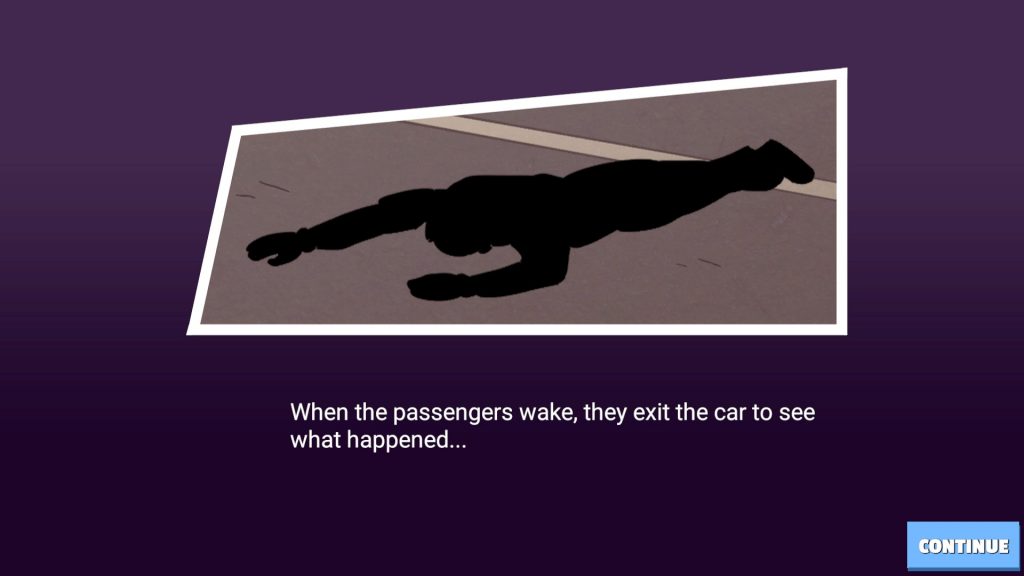 As the passengers fight the airbags to exit the vehicle, they gather a fair bit away from the car to chat about the accident — namely, that it’s odd it even happened. Weren’t self-driving cars implemented to avoid accidents? They speculate they hit a pothole or something minor, considering none of them are harmed. Imagine their surprise when they see a body lying lifelessly in front of the car; Emily was NOT planning on touching a dead body today, yet here she is, poking around for signs of life or at least an identity.

A little snooping reveals no pulse but some answers — the man down is her former boss, Thomas Sinclair. She still held some hurt feelings over the day he had her unceremoniously fired which lead to her cat dying (long story), but it’s not like she’d want him dead or anything! As she reports back to the others, the group finds it odd that they somehow all know him — Kyle from high school, Carter as a former business partner, and Anna as a current co-worker. Stranger still, the car that were riding in used Thomas’ AI, meaning even the car had a personal connection to the victim! Did the car kill him? What’s going on here? 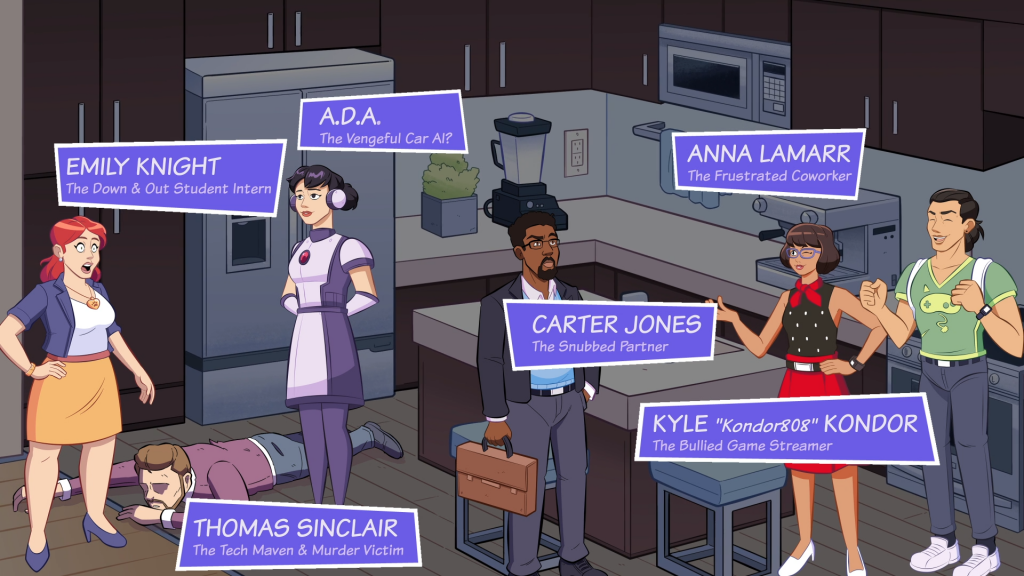 As the group waits for emergency services to arrive, Emily decides to do a little sleuthing. At this point, CRASH: Autodrive becomes a point and click visual novel/adventure in the vein of Ace Attorney, where players must collect clues and speak to witnesses/suspects to figure out who could have killed Thomas. Was it truly an accident, or was foul play afoot? That’s up to you to figure out, but do so quickly — you don’t know if the killer wants the rest of you taken out to tie up loose ends.

Speaking of Ace Attorney, CRASH: Autodrive’s music definitely reminded me of this insanely beloved series. It’s upbeat but tense, if that makes sense, giving off a feel of both light-heartedness and seriousness simultaneously. The characters were memorable, fully fleshed out, and felt absolutely real. One character, Carter, refused to check out the body because he didn’t feel comfortable around police presence given his race, remarking that the protests of “seven years ago” were still fresh on his mind. Like yeah dude, I totally can see the need for self-preservation, and it was crazy how raw and honest that came across. 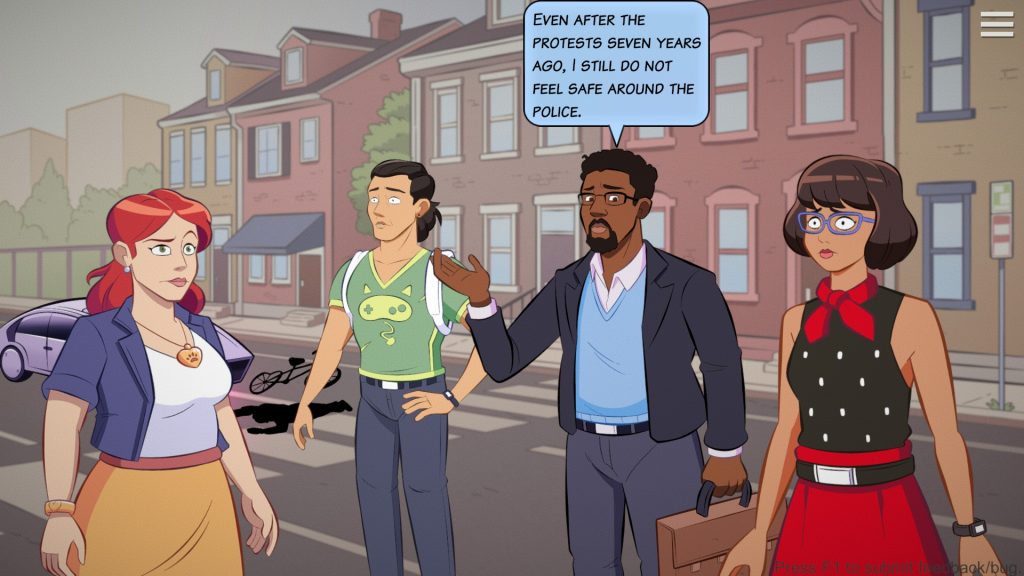 CRASH: Autodrive also had an interesting feature where you could speak to people in front of others or privately, and depending on the situation, you may get more out a person depending on what you choose. For example, it turns out Carter knew the victim but was reluctant to say so because he feared he would be accused of the murder. You can pull him aside and speak to him privately about it, or you can contradict him in front of the other two, putting him on the spot. He’ll remark how grateful he is for your tact if you choose the private option while feeling flustered if you oust him in public. I found this fascinating, and not really something explored in the genre.

I think the thing I’m most curious about with CRASH: Autodrive is how the length of the game will affect the story. Will it be just as scintillating as other murder mystery games despite its estimated completion time of two to four hours? The developers seem to think so, targeting busy gamers who want to complete a game in a single sitting instead of dragging the experience out for days. It’s an interesting gamble, but considering the call for such titles and the genre bereft of them, it’s safe to say that CRASH: Autodrive will, in the very least, draw the attention it’s asking for.

CRASH: Autodrive promises to be a short yet eventful joyride that will treat busy gamers to a scintillating story about murder, mystery, and Markiplier. Okay, maybe not *truly* that last one, but the character’s backstory was suspiciously similar. Also that car was suspicious. And Anna. And Carter. And Emily. And Kyle. All of them. Suspish. Who killed Marki… I mean, Thomas Sinclair? Play the demo to learn more about the suspects, and wishlist on Steam to find out when CRASH: Autodrive releases in Spring of 2021. 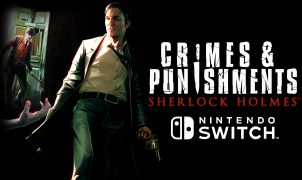