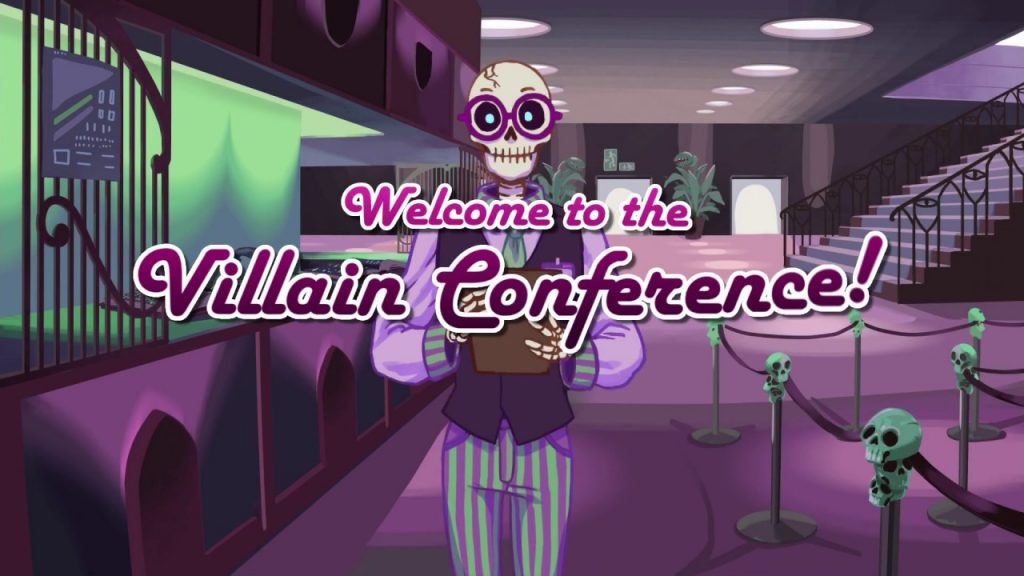 I can’t think of anything more evil than forcing someone to make meaningful connections at an industry conference. So what better environment to host your dating sim featuring an array of villains whose sole purpose is to cause the pain and suffering of humans everywhere? That’s the premise of Lovingly Evil, an LGBT-friendly hand-drawn dating simulator full of colorful characters, witty writing, and a whole lot of charm. You will never find a more wretched hive of scum and villainy than at Villain Con, so why not take the chance to meet your one true love?

Lovingly Evil opens up on a character customization screen, wherein players are allowed to create their idea of a picture-perfect villain. The options are pretty wide, as skin colors range from human flesh tones to ghoulish shades of green and blue. There are also a fair number of hair options, body types, eye amounts, and face shapes. You can even pick a pet to perch on your shoulder! Once that’s settled, it’s time to register for the convention, letting the staff know your occupation (I chose demigod), most villainous act (I chose burning down an entire village and only leaving one survivor), age (I chose 10,000 years and promptly broke the game), and pronouns. 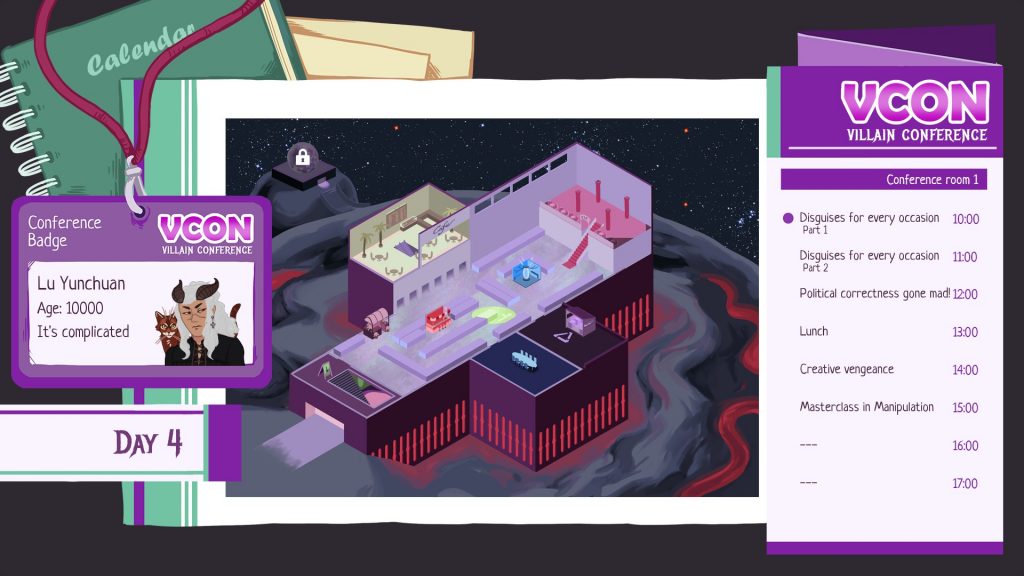 After finalizing registration, it’s conference time! Feel free to wander the halls and network with other villains, although it’s important to keep in mind that time passes throughout the day, so if you want to speak with someone in particular or listen to lectures, it’s best to check your schedule consistently to ensure you don’t miss a thing. Exciting talks about how to plan your perfectly evil outfit or how many backup plans you should have in the event your hero thwarts you await, and your bright-eyed, bushy-tailed self can stand to learn a thing or two about a thing or two.

Speaking of networking, there are indeed plenty of villains in the sea to speak to. An evil scientist and his robot waifu, Nova, a vampire florist, a wicked stepmother, your mischievous clone, and… uh, Satan, are all single and ready to mingle. Professionally. And maybe personally. But definitely professionally. After all, you are at an industry conference. 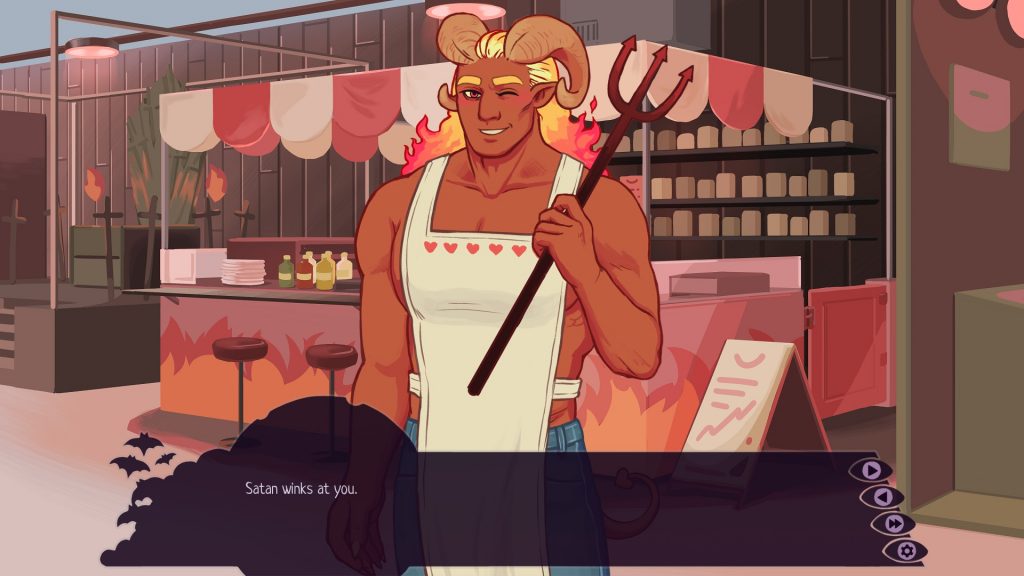 While attending lectures and flirting with various villains, you’ll stumble upon this weird plot where someone is probably stalking you and definitely plotting something. Why else would they have made a clone of you, and why else would this clone be doing things to sully your bad name, such as reading to schoolchildren and help ducks across the street? Nothing about this adds up, and it’s your job to figure out why someone would go as far as to clone you an evil…er twin.

Conferences in Lovingly Evil aren’t all just fun and games… there’s mini-games, too! From playing cards to gain entry to the VIP lounge to helping Satan sizzle sausages, there are a lot of little addicting games to play that will help the poisoned apple of your eye. My personal favorite was the floral arrangement game — one I’ve literally been waiting for my whole life, I’ll have you know — where you use flowers to send specific messages based off the flowers’ meanings. Help the vampire with his clients who require bouquets that warn friends of assassination attempts or let ghosting one night stands they weren’t that great… among other things. 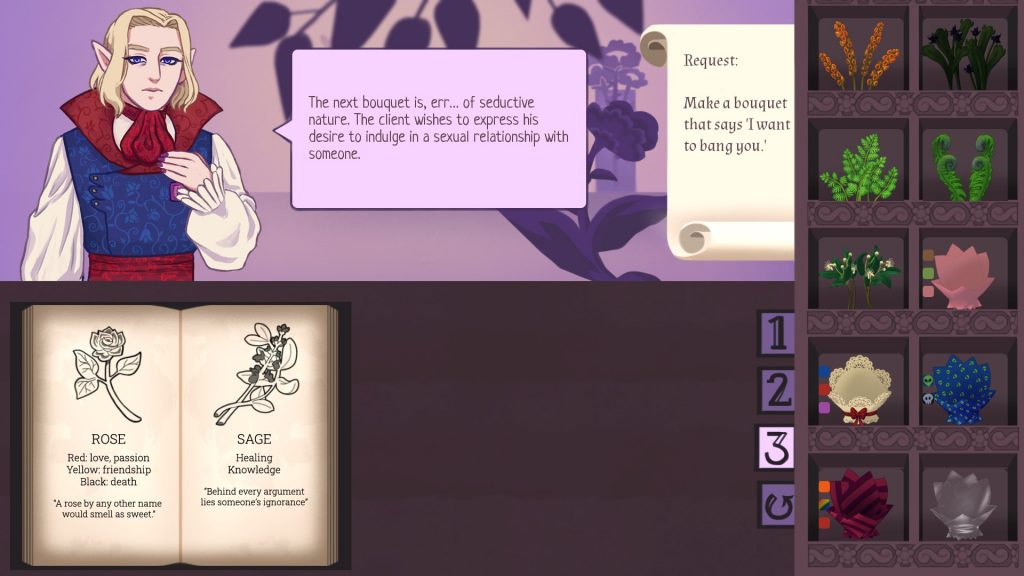 In terms of the romancing happening in Lovingly Evil, I wasn’t totally sold on the emotions. I suspect it had something to do with the art being friendly and inviting instead of overtly attractive, but the love interests just weren’t my cup of earl grey. In all fairness, I haven’t been head over heels for any dating sim daddy since Dream Daddy (I still dream of Craig Cahn’s superior dad arms), but none of the characters really stood out to me. Lovingly Evil does make up for this, however, with personality types that vary from person to person, so if looks don’t matter to you but personalities do, this is definitely your dating sim. From the domineering mommy type to the soft and shy vampire, this game appeals more to people who like to warm up to someone first and get to know them before choosing whether or not someone is attractive instead of the standard gunning for a specific physicality, which I found fascinating.

Since I made my character a 10,000 year old demigod, I figured the vampire would best suit my romantic preferences. Choosing a more masculine musculature and he/him pronouns, I was essentially choosing a gay relationship optics-wise, which is pretty much par for the course in any dating sim to some extent when you can select your gender. What I found different, even refreshing about Lovingly Evil is that the characters didn’t feel compelled to constantly remind me of their orientation. I gleaned from extremely obvious context clues that my bloodthirsty beau was gay since he kept mentioning his ex, Arthur, but he never felt the need to say he was gay. So many LGBT dating sims insert that into conversations in a very clunky manner in my opinion, so this tacit understanding that we are two compatible, consenting beings flirting with each other without the need to repeatedly hit the nail on the head was a different take that I very much enjoyed. 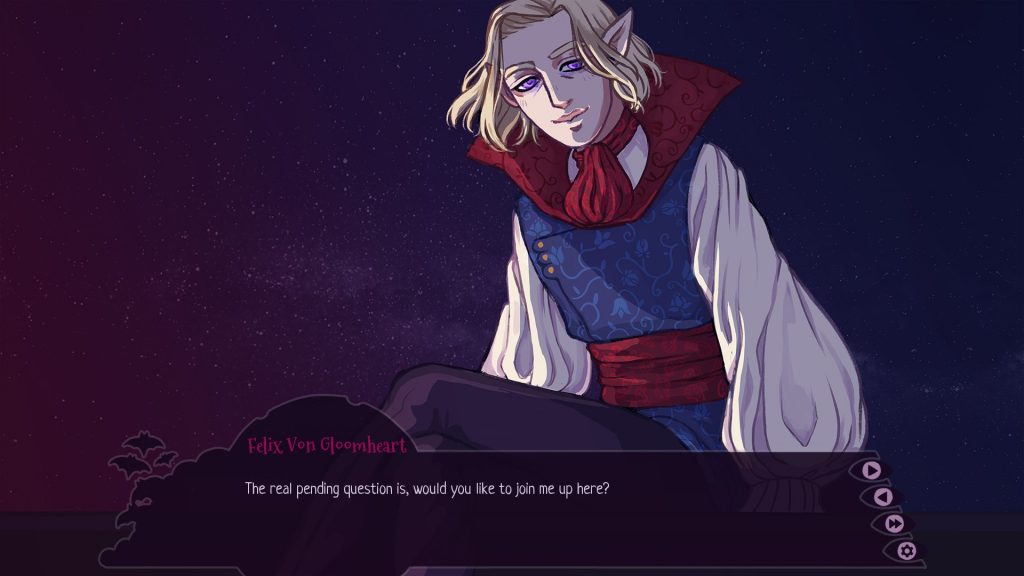 Although completion time in Lovingly Evil is short (roughly two hours for my first playthrough), I didn’t feel cheated of things to do — since time passes while in conversation or lectures, there are definitely things I missed the first time around. Unfortunately, I didn’t feel like the storyline was compelling enough to explore a relationship with the other characters, and I found this weird dissonance between my identity as a villain and trying to impress someone who wasn’t acting all that evil. Additionally, the game got extremely laggy during the floral arrangement mini-game, which was such a shame considering how delightfully unique the section was. I definitely stuck around to see my interview with the vampire through, but I couldn’t be bothered to pick it up much past wooing that immortal cutie.

Still, I think Lovingly Evil will absolutely appeal to fans of the genre for its fresh concept and fun writing. Those specifically seeking LGBT-themed dating sims may appreciate the nuance this game offers when addressing gender and sexual orientation, as it is handled quite differently than others in its class. And, seriously — where else are you going to play a game where you can arrange a bouquet to let someone know you want to bang them? If there’s one thing I can say about Lovingly Evil, it’s that there’s no other dating sim like it, and I mean that in the best possible way.

If you love love and if you love evil, then Lovingly Evil is pretty obviously going to be your game. Learn more about how to become the perfect evil villain while scoping out the bad babes begging to be pursued, all while reading charming writing set against colorful environments and catchy music. It may not be love at first sight for some of you, but it will certainly leave a lasting — perhaps dastardly — impression on you. If your Steam library could use a little more wickedness, consider courting Lovingly Evil.

Full disclosure: This review is based on a review copy of Lovingly Evil provided by the publisher. 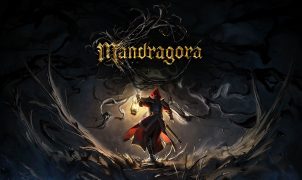 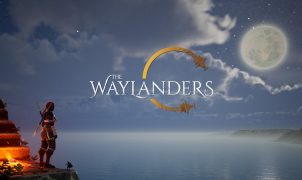 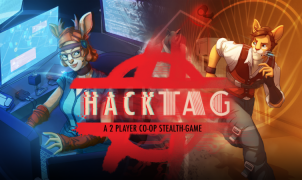 The Joys of Hacking For Fun And Profit       In this cooperative stealth action title, players work together to pull off various heists of secure data from…