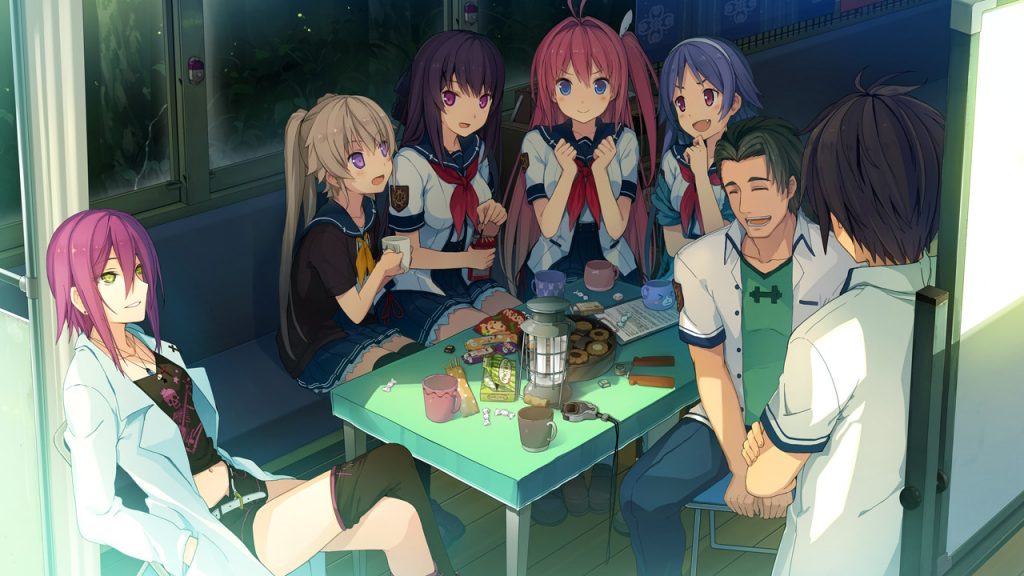 Reviewing visual novels can be kind of difficult sometimes. Part of that is because, despite technically being games, reviewing VNs feels more akin to reviewing a book or manga. The other part that makes it difficult is the fact that, at least in my own experience, almost all of them end up being really good. It’s not easy assigning an arbitrary number to VNs if each of them is just as enjoyable as the last. That’s the mindset that I find myself falling into, anyway. However, there occasionally comes along a visual novel of such high quality that it makes you remember that there are levels beyond “good.” Usually, we use words like “great” or “excellent,” but considering what this review is about, the only words that I’ll be using to describe such a VN is Aokana: Four Rhythms Across the Blue.

Okay, maybe I was a little bit theatrical at the end of the last paragraph. But I wasn’t joking about how highly I ended up regarding this game by the time I had reached its conclusion (or, rather, one of its conclusions). Aokana is, without a doubt, a top-tier example of just how great the contemporary visual novel scene can be. And, while I honestly want to tell you not to take my word for it and to play the game yourself, I kind of have to give you my take on it. So, let’s get on with it! 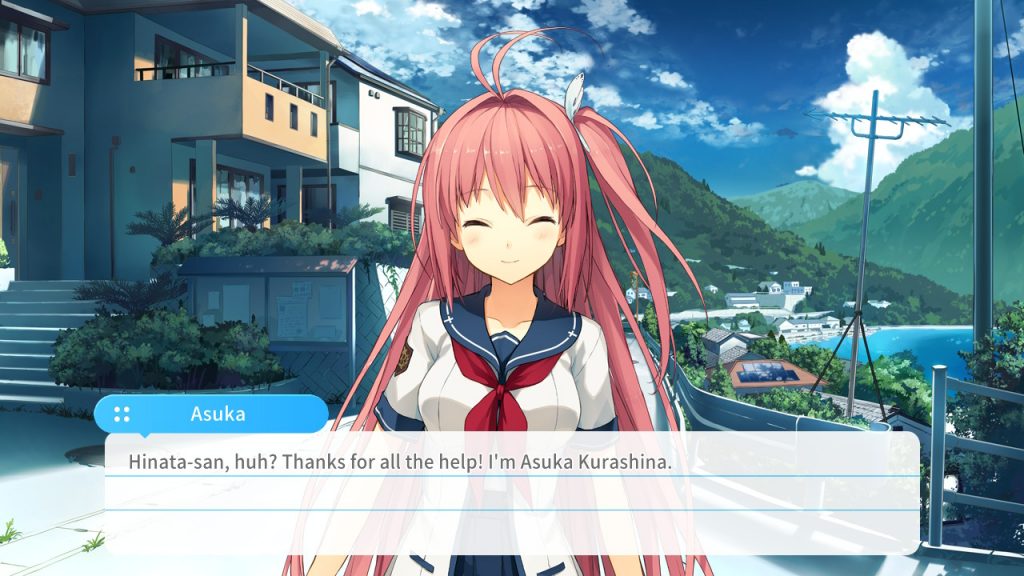 One chance encounter is all it takes!

Aokana takes place in a world dominated by (at least in some areas) the invention of GravShoes—special shoes which allow people to defy gravity (hence the name)—where Flying Circus—a highly competitive sport which utilizes GravShoes—has been on the rise. Naturally, some were better than others, with said prodigies rising to the top. And, wouldn’t you know it, Masaya Hinata, this game’s protagonist was one of them. Unfortunately, as good as he was, he wasn’t invincible—and, after experiencing a traumatic event, he vowed never to do anything related to Flying Circus again. Pretty sad stuff, I know. Don’t be too sad; obviously, he doesn’t stay that way forever. Despite having grounded himself a long time ago, a string of perfectly aligned events (and a lot of pestering from his peers) led Masaya to join his high school’s newly formed Flying Circus team as its coach. And, while Masaya may be aware of the fact that he’ll eventually need to confront his past, he has no idea just how much strength he’ll be able to draw from the bonds he’ll ultimately form with his teammates.

There are a lot of VNs out there. Reading that to yourself, you might think, “uh, yeah, duh,” but I’m not trying to make a stupid statement here. It’s safe to say that, in many aspects, we’ve hit saturation with VNs. Finding scenarios that are both unique and good enough to make into a story spanning dozens of hours has to be unimaginably tough. Is everything that Aokana does unique? Of course, it isn’t. It’s a sports-based, sci-fi harem VN. Those are literally three of the most common tropes. And, sure, GravShoes do make it stand out a little more, but it’s not like this is the first thing that’s ever used flight as a narrative medium, either. 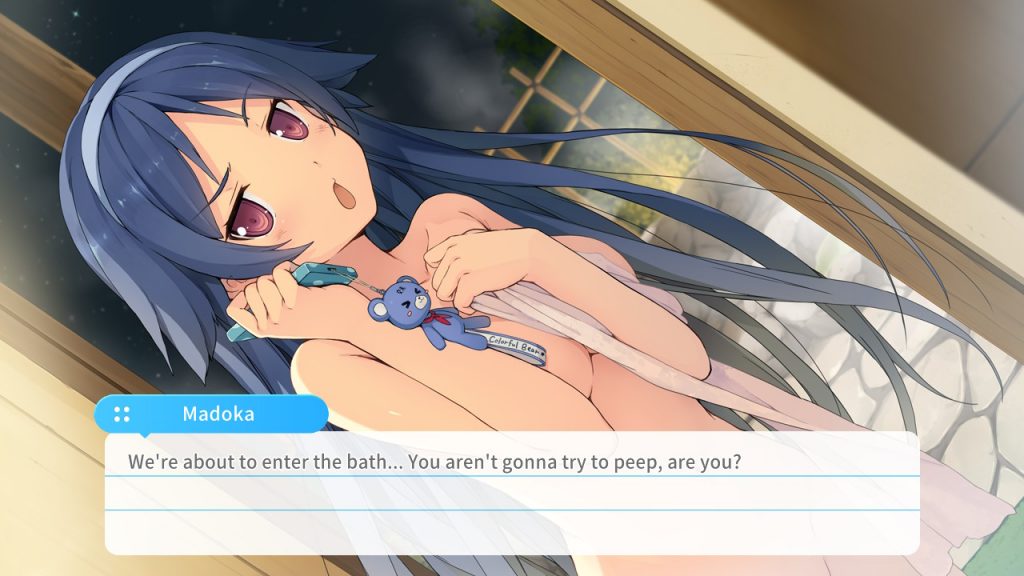 Uh-oh, can’t show THAT on the PlayStation 4!

I know what I just said might have sounded a bit harsh, but I wasn’t building up some kind of attack, there—quite the opposite, actually. Aokana uses a lot of tropes. Yet, despite that, it still manages to stand out in a sea of mostly high-quality VNs as being extra-high-quality. I feel that, too often, people try to equate “new” with “good” in this day and age. And, seeing as how almost nothing is entirely original at this point, I understand where people like that are coming from. But it’s not the only viewpoint around. I think that genuinely talented people can create experiences that feel entirely new, despite treading on old ground—and that’s precisely what Aokana does. 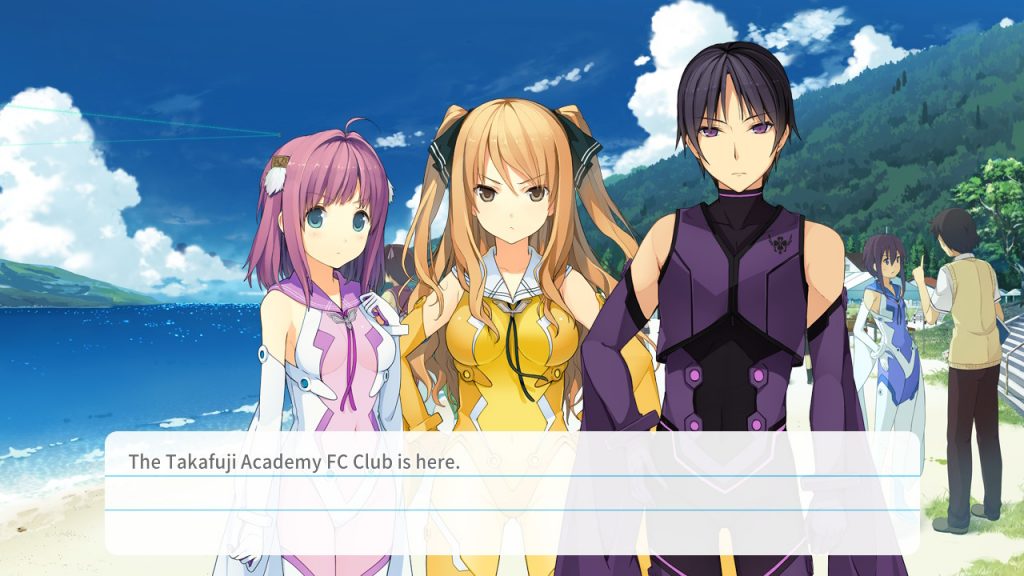 These are honestly some of the most likable rival characters I’ve seen in a long time.

There are a lot of details that I could focus on regarding why Aokana is so engaging, but, for brevity’s sake, I’ll stick to the few things that stand out the most. The first and most important one is the way it handles its characters. I’ll be honest with you; I spent a bit of time deciding on just how I wanted to get across the point that this game has some extremely well-written characters. But, after some thought, I think a lot of that comes down to one thing; subversion of expectations. Like with all visual novels, every character within Aokana is some sort of archetype. I don’t think that’s something that it can really get around. What impressed me, however, was just how it handled said archetypes—or, more specifically, the fact that it didn’t stick hard and fast to traditional archetype rules.

Aokana makes use of an underutilized technique that I’ve come to call “soft archetyping” (because I don’t think that there’s an actual term for it). Despite all starting in positions that could easily have them each pigeonholed into a specific personality type, most of the characters within Aokana are given just enough wiggle room to make them feel less like copy/paste personalities and more like actual people. Interactions and character growth, despite feeling largely familiar, don’t always end up exactly where you would expect them to. Rather than making grand, sweeping changes, Aokana pokes tiny holes into your expectations of its characters and plot. It’s a skill that takes a lot of self-discipline as a writer (because we all fall into habits), and, when done correctly (which it is), it’s absolutely genius. 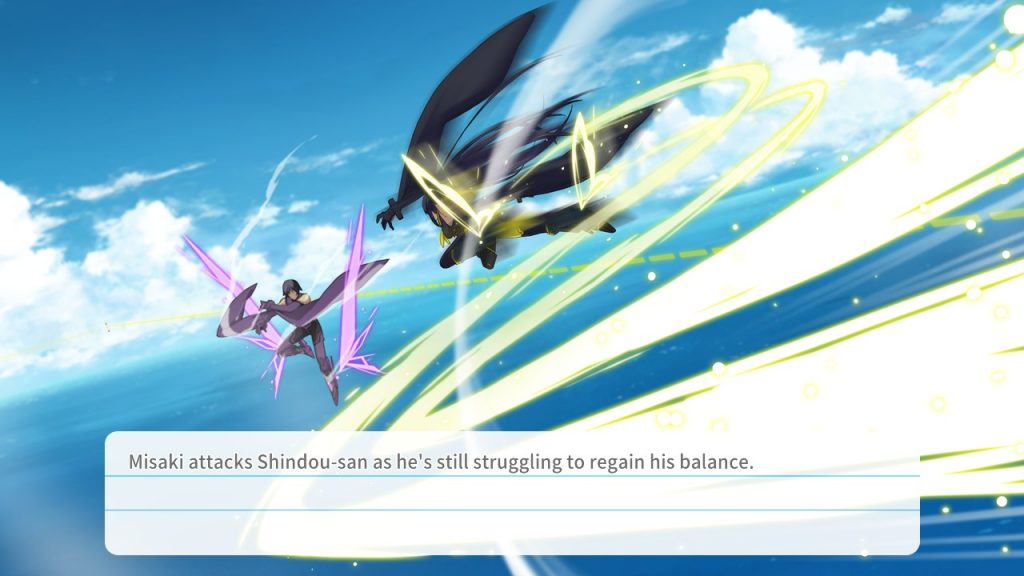 I’d probably be more into sports if they looked as cool as Flying Circus does.

Flying Circus itself also ended up being a major drawing point for me. Action sequences can be really tricky to write, given that the reader is only reading about an event and not actually witnessing it themselves. Of course, VNs do have the upper hand when it comes to this—things become a lot more exciting with pictures, music, and voice acting—but the main draw of the action still comes from the writing itself. If you had told me before that reading about two people flying around in a square would excite me to the point of getting my heart racing, I’m not sure that I would have believed you. I’ve read enough VNs (and books) and played enough games that a simple action sequence isn’t going to get me excited. But Aokana managed to do hype me up despite all of that—and that’s definitely worth something. 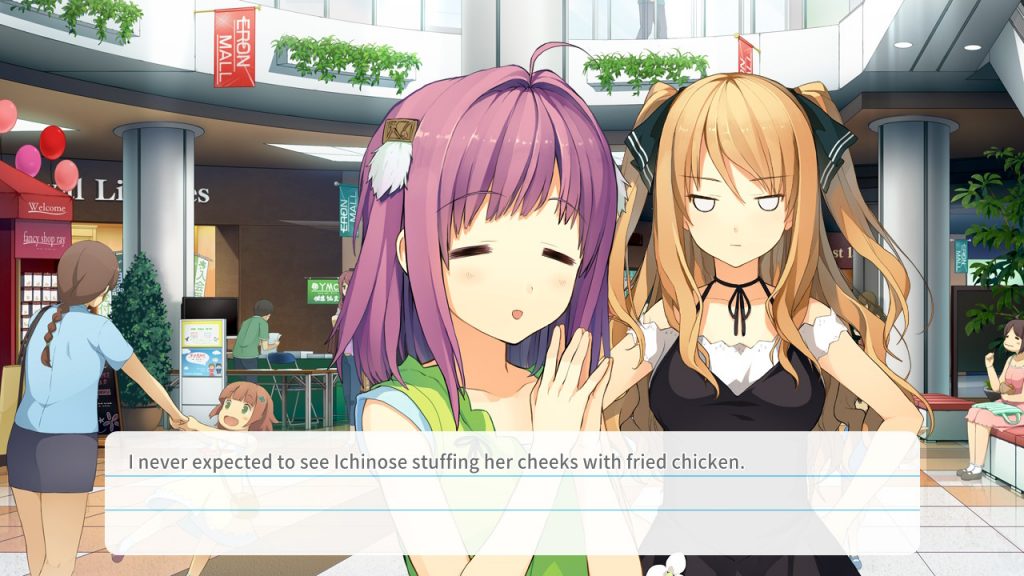 Seriously! Look at those background characters!

Truth be told, I’ve gotten a bit spoiled when it comes to VN graphics. Nice character sprites and gorgeous CGs are a dime a dozen these days. I’m not saying that’s bad or anything, as I love how high-quality things are these days. I’m just saying that you’ve got to really go out of your way to sand out—which Aokana once again does.

Not once did I ever think that “wow, look at those backdrops!” would be a thought running through my mind multiple times while playing a VN, but that sure happened with this game. Not only are they nicely designed, but they’ve also got something that I don’t see too often in other VNs; detailed background characters. As much as it never bothered me that every area you visit in most VNs looks entirely barren, I certainly noticed how much more natural backgrounds—especially cities and classrooms—looked in this game when the main characters weren’t always the only people visibly there. 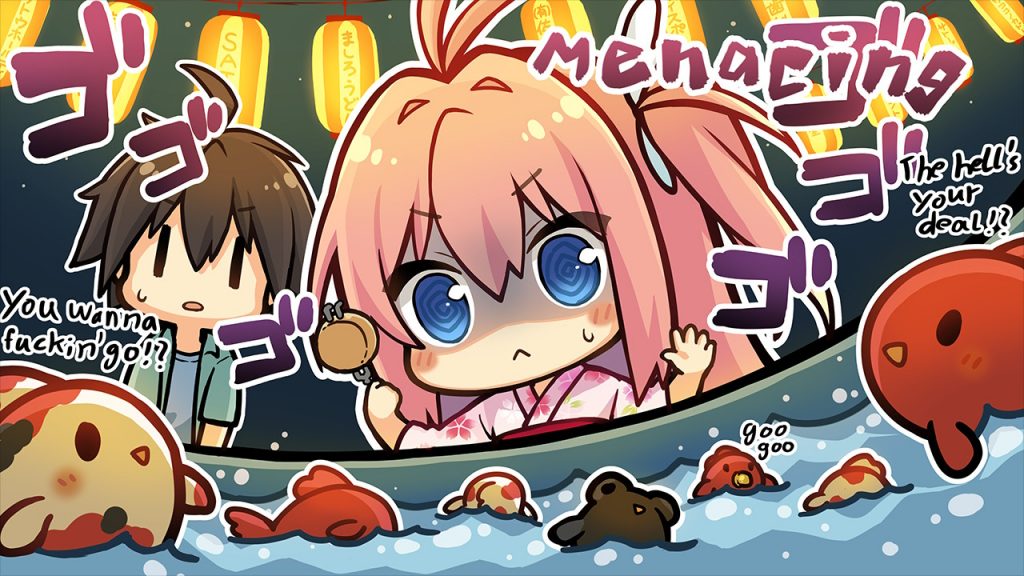 The chibi scenes got me every time.

As much as I love how detailed Aokana can be, I also really enjoy its simple artistic moments as well. And, by “simple,” I mean “chibi.” Every once in awhile, usually when the game’s in the middle of a particularly comical scene, the game jumps on over to the land of the super-deformed—and boy is that ever effective. I don’t think that there was a single chibi-fied scene that didn’t make me laugh. Sometimes it’s the simple things that end up being most effective!

It’s nice to know that my already-high expectations for visual novels can still be surpassed from time to time, and I have Aokana: Four Rhythms Across the Blue to thank for that. Despite mainly focusing upon basics such as love, friendship, and determination, the whole of it ultimately culminates into sublime VN experience. If you like VNs, you’re going to like Aokana. It’s really that simple.