I’ll Give Them Shelter, Like You’ve Done for Me 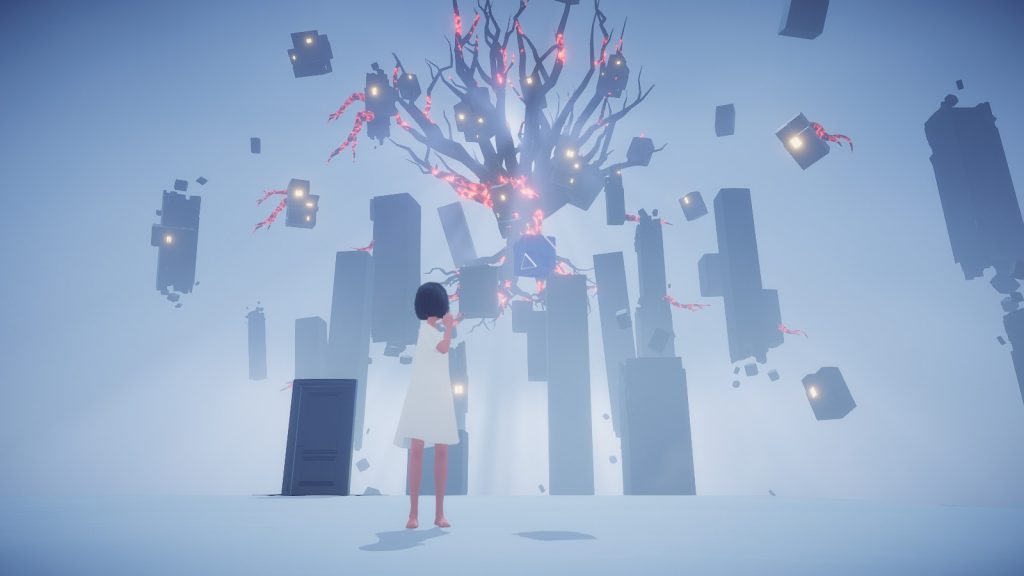 I’m going to begin this review by letting you in on a little something about myself; I really like Porter Robinson’s music. He seriously knows his stuff. Now, you might be wondering what that has to do with this game. Well, honestly, probably nothing. I’m sure that Porter Robinson and Ever Forward have nothing to do with each other at all. But that didn’t stop me from realizing the uncanny number of resemblances there were between this game and the music video for Porter Robinson and Madeon’s Shelter.

Now, does any of what I’ve just said actually matter? To most of you, probably not. But it did to me. The artificial world depicted within Shelter was one that I’ve found myself wishing that I could visit. A wonderful-yet-depressing place, that world was filled with everything that Rin, the protagonist could ever ask for… Well, almost everything. And, wouldn’t you know it, the situation that Ever Forward‘s Maya seemed to be in, too. Unfortunately, it seems as though this notion was taken too literally, as this game, despite looking absolutely gorgeous, isn’t as great as it seems.

Seeking a Mom for the End of the World 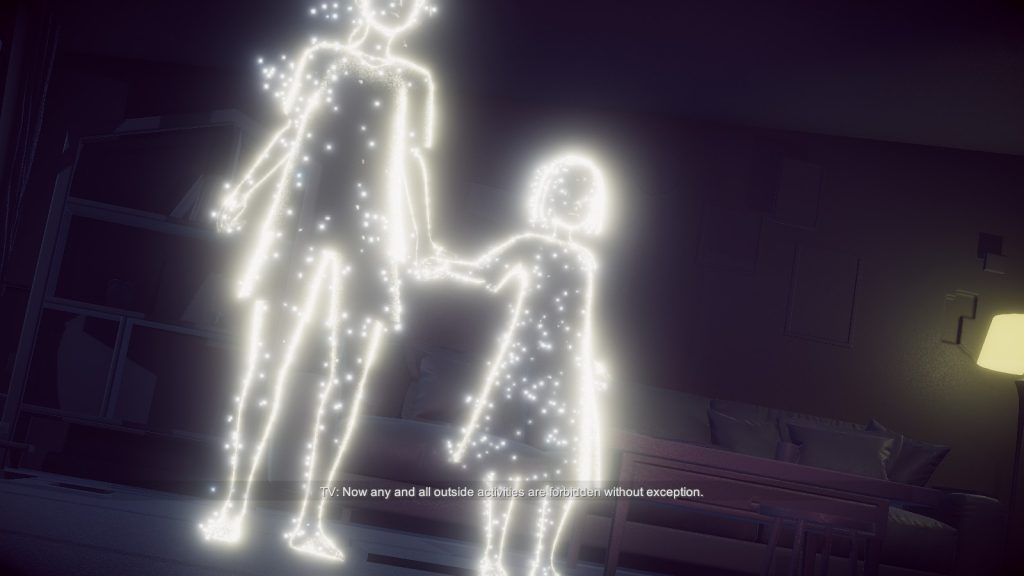 Things don’t get any better from here, unfortunately.

Taking the guise of a story-within-a-story, Ever Forward follows Maya, a young girl as she travels through a strange world whose dual nature rests on the border between wonderful and terrifying. However, Maya’s journey, despite being the focal point of the gameplay, is not the focal point of the story. Rather, Ever Forward‘s story focuses on a time before Maya’s adventure—a time in which Maya and her mother, Ann, were still together. A scientist at the National Science Lab, Ann has been hard art at work, developing a project in secret. While her work may potentially be helpful to most, Maya finds that her mother being hard at work all the time has created a rift between them—and the situation only becomes direr when an unexpected snowfall marks what appears to be the beginning of the end of the world.

Although short and, for the most part, very direct, Ever Forward‘s story does its job with a great amount of efficiency. What makes Maya and Ann’s story such an emotional one is that, despite being at odds, neither can be faulted. Ann is a small child who, although bright for her age, still knows next to nothing of the world and the impending doom facing everyone. Nor does she understand just how important Ann’s work is. All she wants is some attention from her mom. Ann, on the other hand, is very obviously torn between wanting to be a loving mother and needing to do her part as a scientist. It’s obvious that she wants to spend as much time with her daughter as she can, but when duty calls, she has to answer—especially when the fate of the world is at stake. It’s a story that’s sad, simple, and very relatable overall, and I don’t think that it needs to be anything more than it already is. 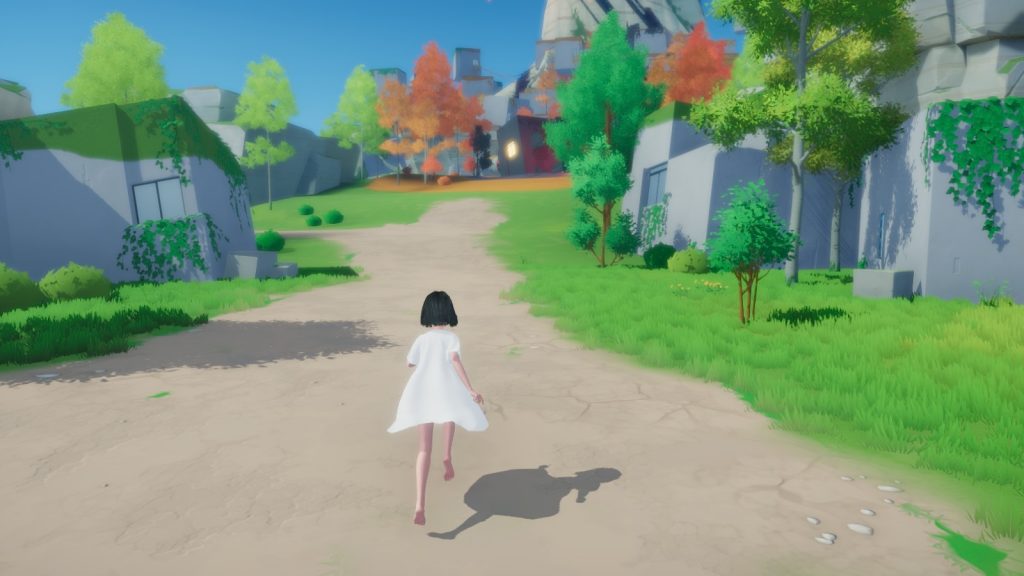 The juxtaposition between life and death in Maya’s world is not only effective but wonderful to look at as well.

Depending on which part of the game that you’re currently in, Ever Forward can either best be described as either a walking simulator or a puzzle-platformer. Technically speaking, the game’s overworld is little more than a vehicle designed to get players from level to level. I would, however, argue that it’s worth more than that. While each part of the game has an undeniable charm, Ever Forward‘s true beauty shines best here. Not only is the world itself vibrant and (seemingly) abundant with life, but I would go so far as to argue that it helps to tell the game’s story. Nearly everywhere you look, you’ll not only find signifiers of the spreading of nature, but those of humanity’s decay as well. Every single building seems to be abandoned and in a state of disarray, with nothing to hold Mother Nature from claiming it for her own—which she absolutely seems to be doing.

There are also a handful of secrets and things with which the player can interact—the small boat being my favorite—that, while not necessary, only enhance the experience further. They’re a great example of how to make an impact on the player without going over the top. If you’ve ever wanted an example of how great video game worlds can look and feel, Ever Forward is definitely a game to turn to.

Pulling Back the Curtain 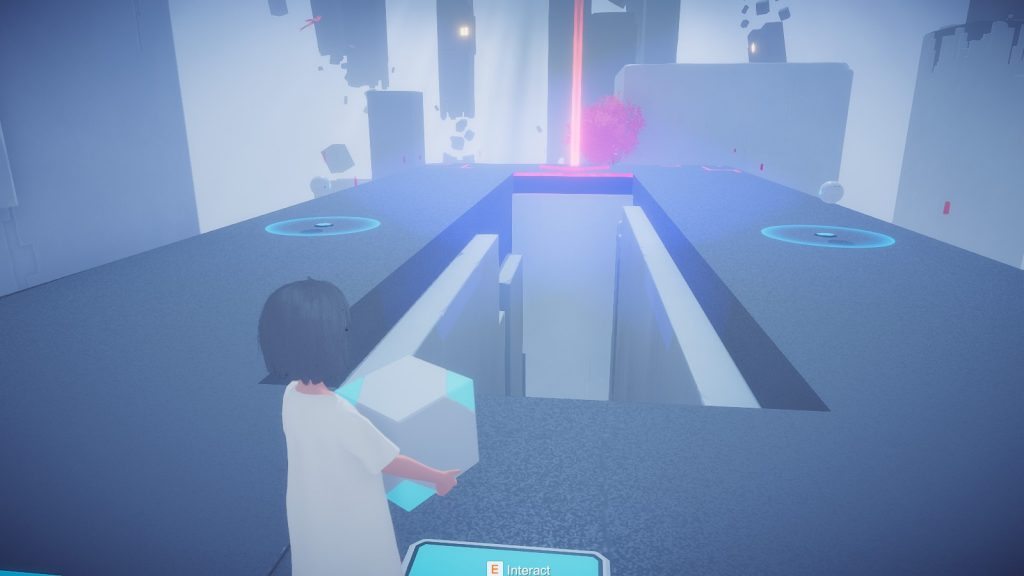 How can something so simple-looking be so complicated?

While walking around the wonderland that Ever Forward‘s overworld is fun, completing puzzles is this game’s real bread and butter. Unfortunately, it’s bread and butter that looks better than it tastes. Ever Forward‘s puzzles are, admittedly, not what you might expect from a puzzle-platformer—namely due to its heavy reliance on stealth. As with most puzzle-platformers, the goal in each of this game’s levels is simple; all you need to do is bring your cube-shaped companion (or maybe it’s just a regular cube?) to the end. Not only is this easier said than done, but it’s also not as enjoyable as it should be.

Before I continue, let me say that I’m not anti-stealth mechanics. They can be a great addition to a puzzle-based game if applied properly. And Ever Forward comes close to doing that. Unfortunately, close only counts in horseshoes. Your biggest adversary in each puzzle isn’t carrying the cube from start to finish, but security robots known as “Roundy Bots.” Normally, Roundy Bots sit facing a set direction. However, by triggering them without getting caught, you can get them to face other directions. Triggering a Roundy Bot is easy—you either throw your cube next to them or through their line of sight or make a noise by either falling or jumping—but because their senses get better when they’re on high-alert and Maya’s run slows down to tip-toeing, you’ve got to really plan out in advance how you’re going to get around them.

Out of sight, out of mind!

The problem with trying to explain why these puzzles don’t feel like they work as they’re intended to is that there’s not one specific thing that I could point to outside of Roundy Bot itself, and that’s way too general. Things just feel uncomfortably close too often. I get that this game relies on stealth, and part of the excitement of being stealthy is just narrowly avoiding getting caught. But Ever Forward blurs that line too much for my liking. For every level that I felt good about completing competently, there was another level that left me frustrated and saying to myself, “I don’t think I was supposed to beat it like that, but it worked.” As short as this game is, every level needs to count for something. To impact the player positively and encourage them to continue. But there were just too many times when Ever Forward‘s levels failed to live up to that standard.

I really wanted to like Ever Forward. And, in some ways, I did. Its surreal beauty is mesmerizing, and its story is both tragic and heart-warming. But scenery and stories a puzzle game does not make. You’ve got to have puzzles for that to work out. Or, more specifically, good puzzles. And, while Ever Forward has the forward, I found it to be lacking in the latter. I’m not telling you not to get this game—because there is certainly enjoyment to be found within it—I’m just telling you to brace yourself several bouts of frustration if you do.