A Tail for the Fans 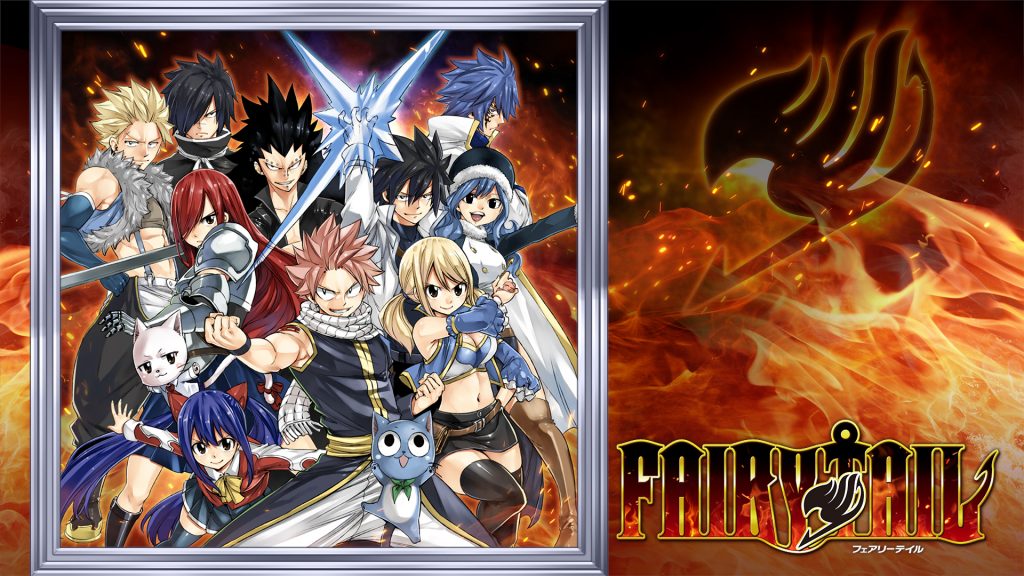 I’m always amazed by how quickly GUST can get their Atelier games out. It hasn’t even been a year, and yet here I am already, reviewing Atelier… Fairy Tail? Wait a minute, are you sure this isn’t an Atelier game? It definitely feels like one. Alright, whatever. I guess I’ll take your word for it.

All jokes aside, I can appreciate what GUST did for this game. Don’t get me wrong or anything; it’s not without its issues. It feels like corners were cut for the sake of convenience in certain areas, and you can be sure that we’ll get to those eventually. However, when looking at Fairy Tail as a whole, it still feels like they really tried to make this game an enjoyable experience for fans of the series.

In the Blink of an Eye 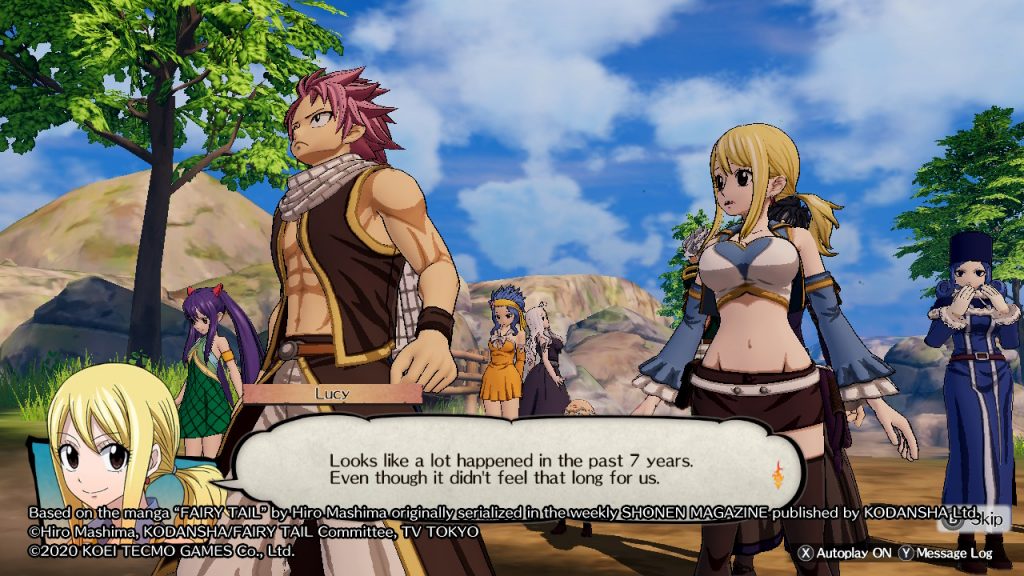 You have no idea.

Fairy Tail begins, somewhat ironically, at an end. More specifically, at the end of the Tenrou Island Arc (which is a little over halfway through the series from what I can tell), with the Fairy Tail guild, unable to defeat the dragon Acnologia at their current strength, coming together to protect both themselves and their holy land by making it (and everyone on it) vanish entirely. While successful, Fairy Tail’s actions would ultimately result in the participating members essentially becoming non-existent for the next seven years. And, while Natsu & co. did finally come back, their status as a guild dropped so low that it was bordering nonexistence.

So, I’ll be honest; this game is my first-ever experience with Fairy Tail. I’ve neither seen the anime nor read the manga before, so my experience with this game is going to be a bit different from those who have been following it for a while. With that being said, it feels like they tried to cover the largest amount of ground in the shortest time possible. Given that this game only focuses on three arcs—X791, Magic Games, and Tartarous—and chooses to gloss over crucial events happening in-between said arcs, Fairy Tail is very much a game intended for people who are familiar with it. 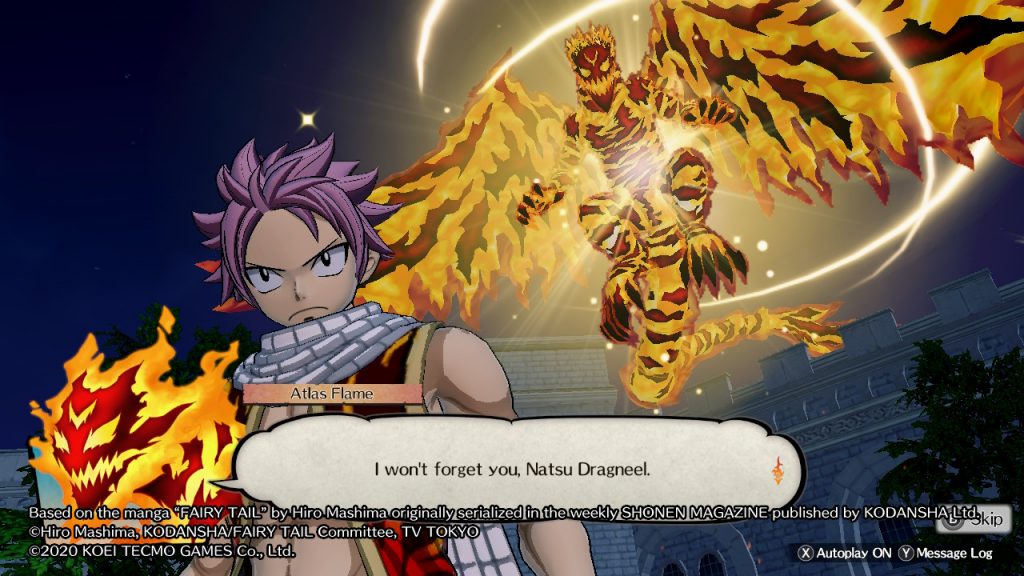 I’m sure that Natsu won’t forget you, either.

But what about people who aren’t familiar with Fairy Tail? Will they enjoy the game just as much? Well, no. Probably not. Like I’ve already said, this game picks up in (what appears to be) around the middle of the series. A lot has already happened, and, while it does explain certain things, you’re expected just to know most of what’s already transpired. That doesn’t make this game bad, though. Speaking from personal experience, the game is most definitely still enjoyable if you haven’t played Fairy Tail before. It’s just that it feels like less of a video game version of an anime/manga, and more like a JRPG with a big chunk of its story missing. You’re not going to understand everything, but watching the Fairy Tail guild and its friends and foes grow and fight with one another is still a lot of fun. And, hey, you might just find yourself wanting to check out the series afterward. I’m certainly looking forward to binging it when I’ve got the chance! 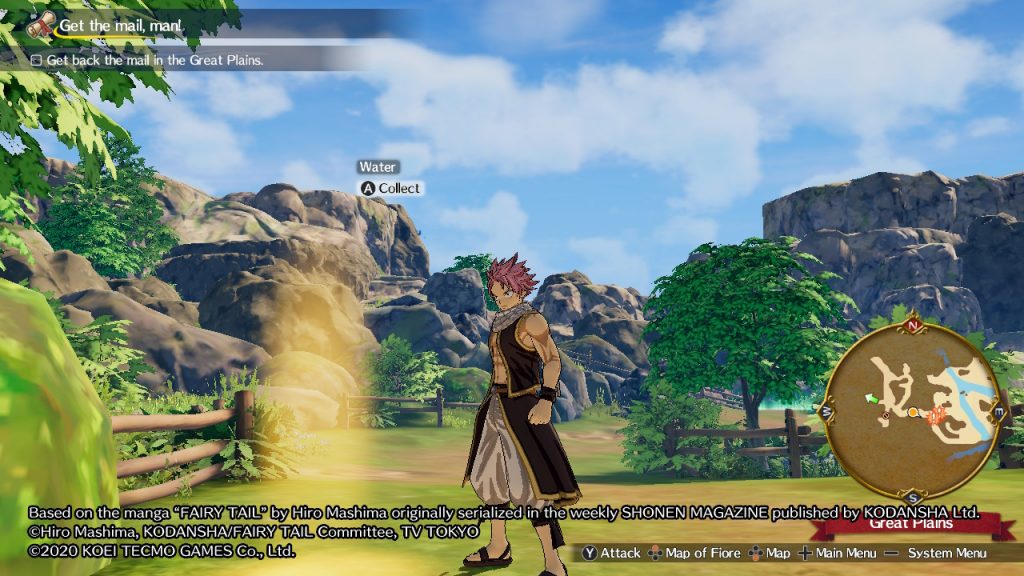 It should be pretty obvious who made this game.

It might seem like I was teasing this game a little bit at the beginning of this review, and I guess that I was, but I can promise you that there was merit to what I was saying. As a long-time fan of the Atelier series, I’m no stranger to the way in which GUST developed their JRPGs—and Fairy Tail absolutely fits the bill of being a GUST JRPG. To cut right to the chase, this game feels like an Atelier-lite; a good portion of the game is dedicated to completing quests, gathering materials, defeating monsters, and cycling through a small number of different areas while doing so. If you’re familiar with the more modern Atelier titles, especially those in the Arland and Dusk trilogies, then Fairy Tail should feel familiar. And, in my opinion, that’s just fine. While Fairy Tail‘s gameplay isn’t as expansive as that of GUST’s flagship series, this series didn’t start as a video game; there was no “traditional playstyle” for it. And, knowing that, GUST simply did what they felt would be best/

It’s also worth mentioning that, while many of the quests are incredibly same-y in terms of mechanics, Fairy Tail‘s attempt to infuse most of them with some kind of story helps to mitigate them a bit. In fact, aside from the repeatable generic requests (all of which are literally named “Regular Request), each of Fairy Tail‘s quests comes with some kind of mini-story. And, whether GUST realizes it or not (I’m assuming that they do), this makes a world of difference. Not only do these bite-size stories break up some of the tedium quickly accrued by doing what essentially amounts to doing the same thing over and over, but it’s also genuinely enjoyable to learn about the world and characters of Fairy Tail bit-by-bit. And if lore’s not really your thing (which would be kind of weird in this case), quests also allow you to recruit and strengthen characters, earn new equipment, and build up character bonds! Woo! 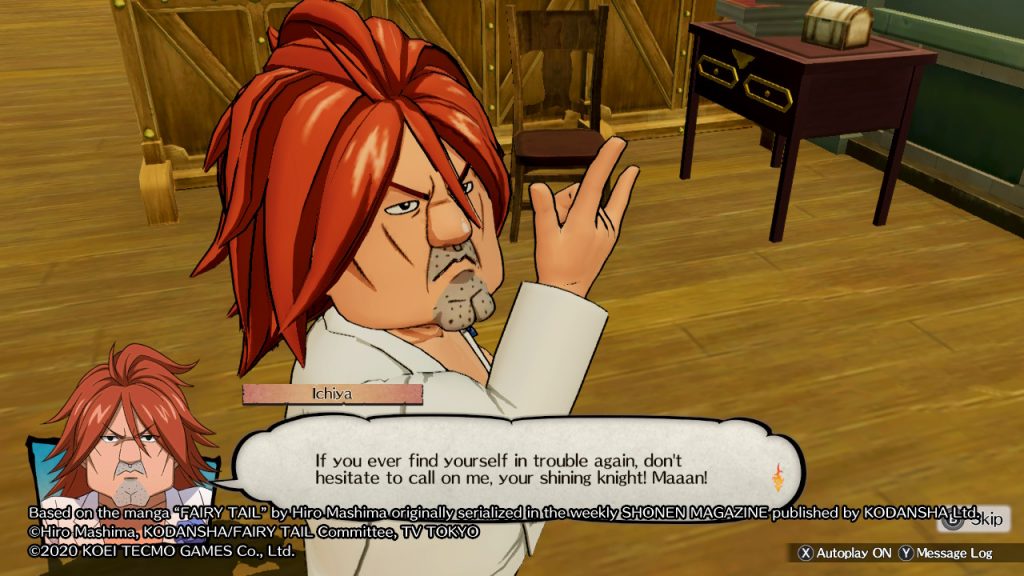 Questing aside, Fairy Tail is an extremely linear game due to what I can only assume is the fact that it’s based on a story that already exists. In fact, there are a lot of times—especially near the end of the game—when you can’t do much outside of directly engaging in story-related activities. As notorious as I am for wasting hours doing anything not story-related in RPGs that I play, I can’t say that I had a huge problem with Fairy Tail‘s decision to do this. Yeah, it does create some weird pacing issues in certain places, but, once again, it seems like GUST was just doing the best that they could. Given how important and well-known Fairy Tail‘s story is, I think that most players would be upset with them taking a bunch of weird liberties just for the sake of padding out gameplay. 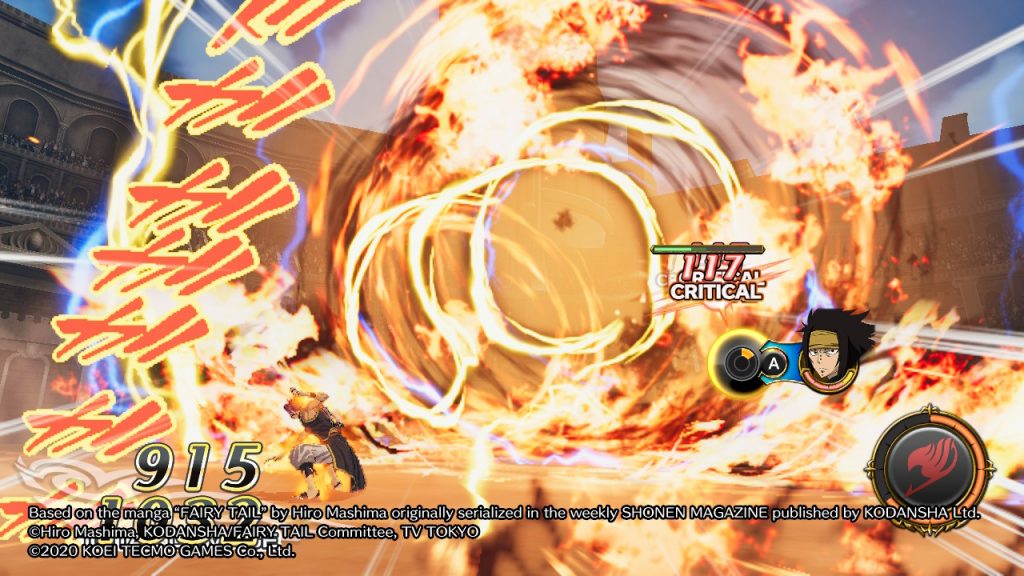 Using attacks like this one feels as good as it looks.

It probably wouldn’t surprise you if I said that combat was the main focus of this game, and that’s good because combat is most definitely the focus of this game—but perhaps not in the way you’d think. Despite being an action-oriented show, Fairy Tail‘s combat is turn-based in a way that, once again, should feel very familiar to those who play Atelier titles—albeit a little more basic. And, while basic isn’t necessarily a bad thing, the fact that the game is a little too easy kind of is. Fairy Tail is a game that very much wants players to live through the many experiences of Natsu & co. themselves. If your team isn’t supposed to lose a battle canonically, the game adjusts for this by adding in special commands or by giving you buffs. This doesn’t mean that victories are assured—some of the battles near the end when you were only allowed to use one character were tricky—but you can expect to come out on top more often than not.

Normally, this passiveness and hand-holding would be huge turn-offs for me. I like being challenged by my RPGs. But I found myself not minding Fairy Tail‘s overall lack of difficulty too much. And, yes, a lot of this was because of how darn flashy it all was. Fairy Tail seems to want players to feel like they’re the characters that they’re playing as much as possible. And, while the game can’t literally imbue you with dragonslayer magic, it can do its best to draw you in with some of the most visually appealing attacks that I’ve seen in a JRPG in a long time. Burning your enemies to a crisp with the single press of a button or effortlessly chaining together attacks may not be difficult, but man does it all look cool. 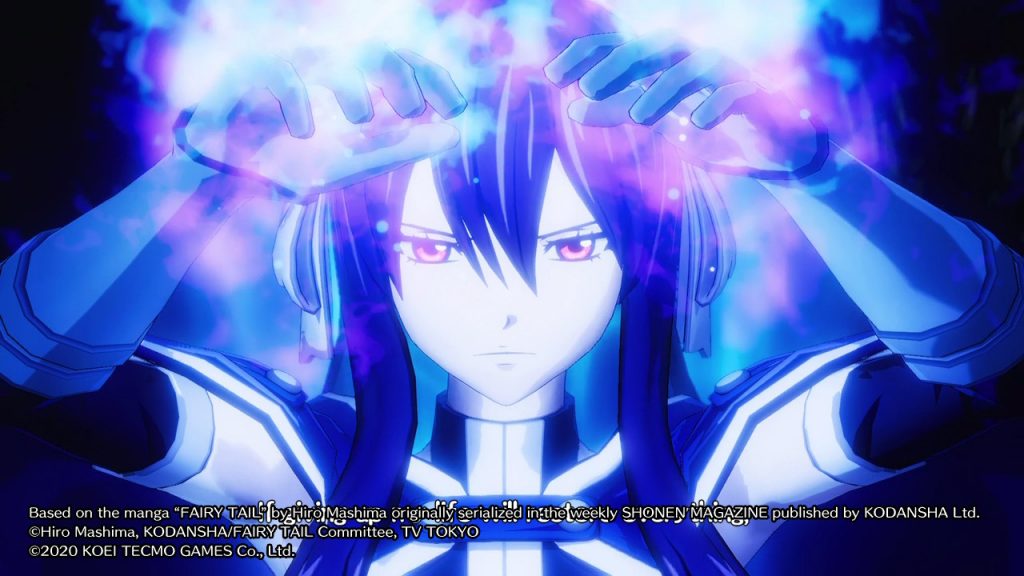 This game’s got some really pretty-looking cutscenes.

Graphics aren’t something that I always discuss, but I feel it necessary in this review simply due to the fact that Fairy Tail seems to go out of its way to min-max its attention to detail. On the one hand, I’d like to applaud the game for its character design. While making a 3D model perfectly mimic its 2D counterpart is difficult, each and every character in Fairy Tail looks gorgeous—even when playing in handheld mode (things only look compressed in the screenshots, I promise). On the other hand, everything that isn’t a character model looks awful. Like, we’re talking, “I thought that the graphics were still rendering” awful. I suppose that I can appreciate it on some level; the fact that characters are given so much attention means that cutscenes and battles look great. But the fact that you’re running around in a boring, borderline-non-textured world takes away from that some.

Sit Back and Enjoy

As enjoyable as this game was for an outsider like me, there’s no denying Fairy Tail‘s true nature as a game aimed at its pre-installed fanbase. It’s the kind of game that you excitedly dive into because you’ve been a fan of the series for so long and want to experience its story like never before. Playing it with the mindset that it’s “just another JRPG” might leave you wanting more at the end of it all, but I know for a fact that, had I already been familiar with Fairy Tail, I would have eaten everything up faster than Natsu himself.