We all fall down 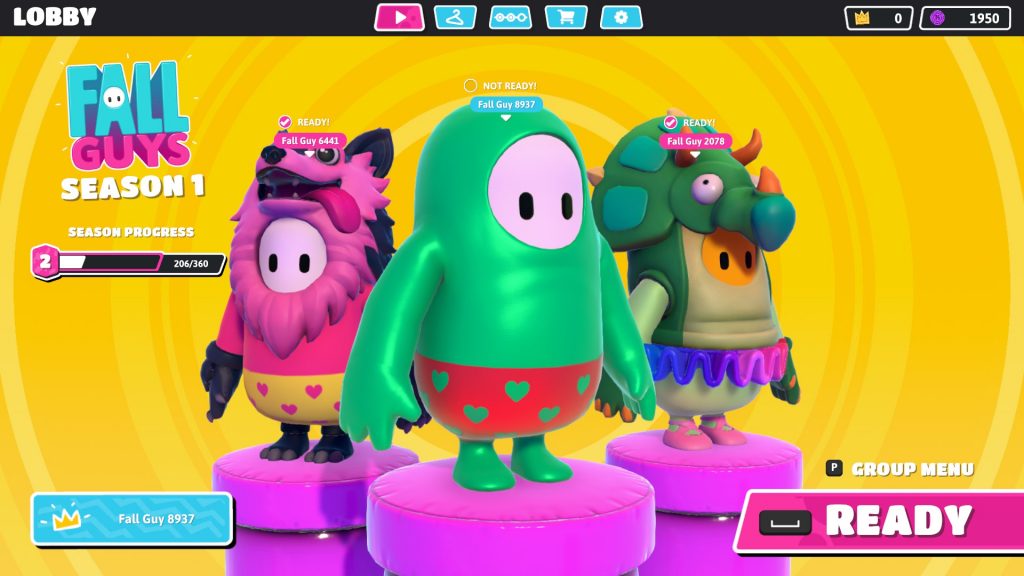 Gamers of a certain age might remember MXC: Most Extreme Elimination Challenge, a 2000s TV show that took a ridiculous 1980s Japanese program, Takeshi’s Castle, and dubbed over it to make it even more ridiculous. Of course, Takeshi’s Castle was funny on its own without the deranged dubs; featuring famous actor Beat Takeshi, contestants would work their way through the numerous traps Takeshi had set around his castle. One by one, contestants would try and — more often than not — fail to get through the brightly colored obstacle courses placed before them, Takeshi’s treasure safe from all but the most persistent.

The game show was so popular that 31 countries from all over the world dubbed or made their own versions, but the themes remained the same — a goofy obstacle course in a battle-royale format, where only one contestant could take home the crown.

Which brings us to Fall Guys: Ultimate Knockout — it’s pretty much Takeshi’s Castle. So, you know, awesome. 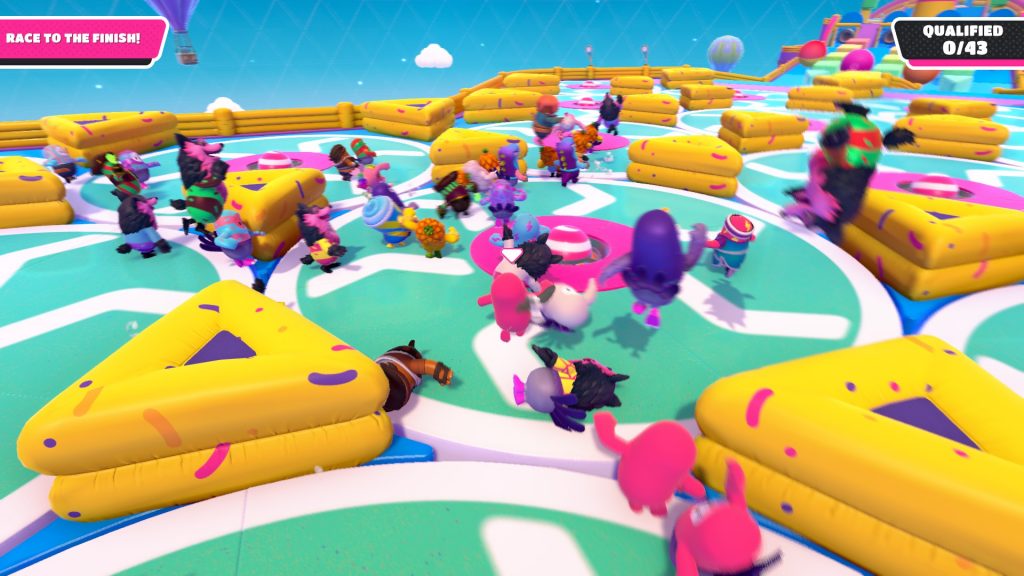 Developed by Mediatonic and published by Devolver Digital, Fall Guys: Ultimate Knockout was arguably the most hyped title announced in Devolver Direct 2020 — and for good reason. Available on Steam for $19.99 and on PS4 as a free download with PlayStation Plus, it’s been a server-breaking experience that has taken gamers by storm. With up to 60 players per show whittling down to one winner taking all, Fall Guys: Ultimate Knockout has been a super cute yet surprisingly super intense way to waste the day away with friends and strangers alike.

Players take control of their Fall Guy, who can be kitted out with different color schemes, costumes, and designs. At first the options are limited, but playing a few rounds unlocks kudos, one of two in-game currencies that can be used to unlock cosmetic items and emotes. Once customized as best as possible, it’s time to start the show; either by going solo or grabbing up to three other friends for a group of four total, players are thrown into random levels where only a set number may qualify for the next round. Can you beat the odds to take home all the glory? 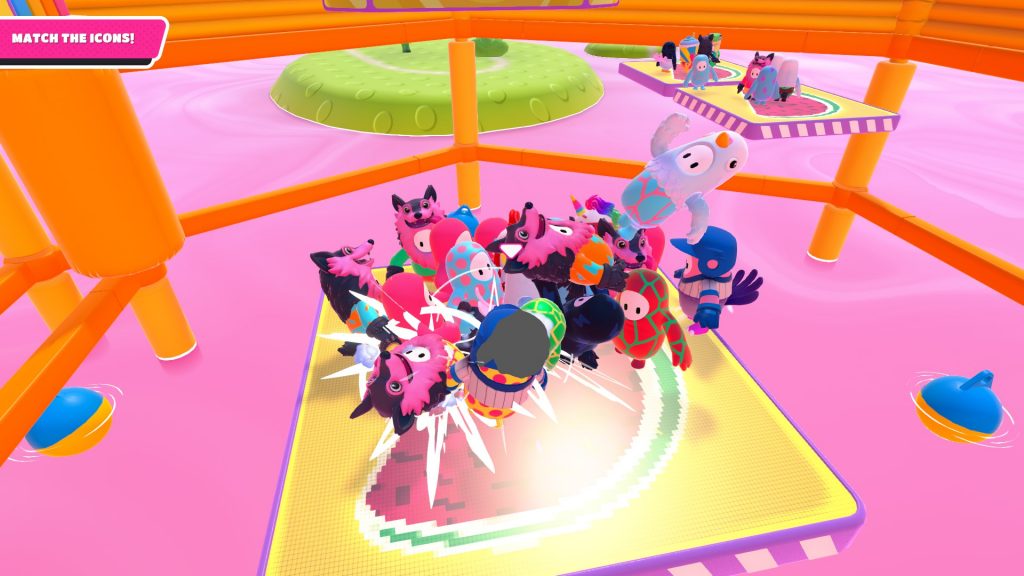 Controls are… well, I won’t lie to you — PC controls are kind of garbage. WASD controls movement, space controls jump, and mouse controls camera. Simple, right? Except shift and control maybe(?) handle dodge and grab, respectively? Except it doesn’t seem to work very well, and it leaves a lot being handled by one hand (I tried using the right side shift and control, but wasn’t getting a response). If you have a controller, please use it. If you don’t have a controller but want to play Fall Guys: Ultimate Knockout, please get one. If you refuse, at least turn the sticky keys warning off unless you want to sabotage yourself or change up the key binding as soon as possible.

The level design is perfection. Taking a tried and true game show concept and turning it into a video game has never been done so seamlessly. From the see-saw level that forces you to rely on the weight of other players to propel you forward to the knocking ball obstacle course that will have you on your back more than your feet, Fall Guys: Ultimate Knockout lives up to the hype as a perfect party game. Each level is progressively more difficult, but despite the curve it all feels approachable, and even the most experienced players can get knocked down by complete newbs. A fair and balanced playing field, Fall Guys: Ultimate Knockout is pure fun no matter how many hours you’ve put into it. 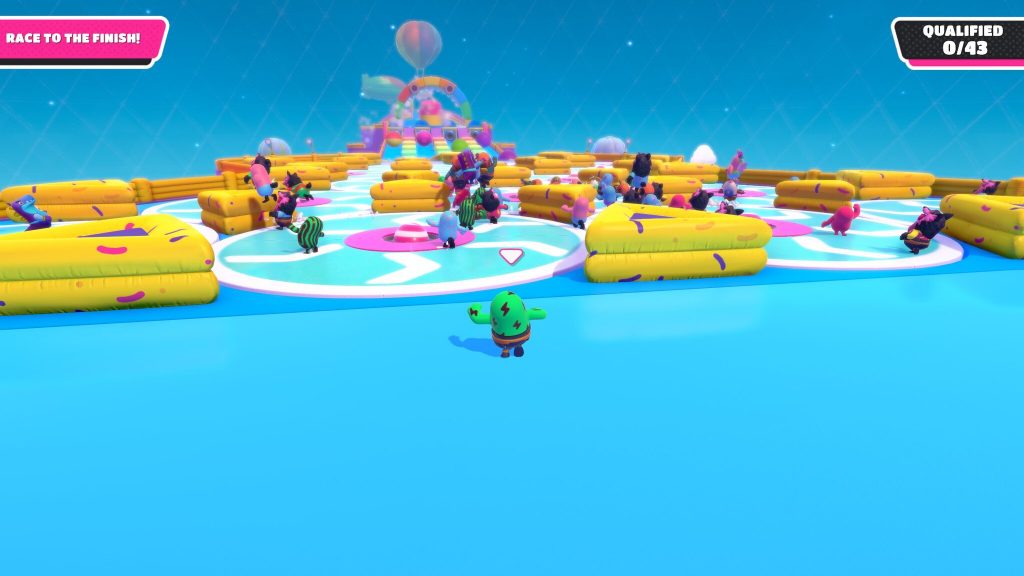 The aesthetics of Fall Guys: Ultimate Knockout speak for themselves, but I’ll gush about them anyway — it’s like being in a magical land made of candy. I want to eat the levels. Is that weird? That’s weird. But the visuals are so delightful to the point of appetizing, as if it will all taste of cotton candy, sprinkles, or sugar. Combined with the upbeat electropop music, Fall Guys: Ultimate Knockout is a sugar rush for the senses without the empty calories, with all players in for an absolute treat.

Unfortunately, not all is perfect with Fall Guys: Ultimate Knockout; at this point, probably everyone has heard about the server issues that have befallen the aesthetically-popping party game. In their defense, the developers are working tirelessly to expand their servers to account for the overwhelming amount of players, but in the meantime, expect to be disconnected, especially if you’re playing with friends or spectating. The situation is getting progressively better as time goes on, so by this time next month, I have complete faith that this will be a moot point — if anything, it’s kind of a good problem to have for a developer, as too much strain on the servers means an overwhelming amount of players, which, last I checked, is a good thing. 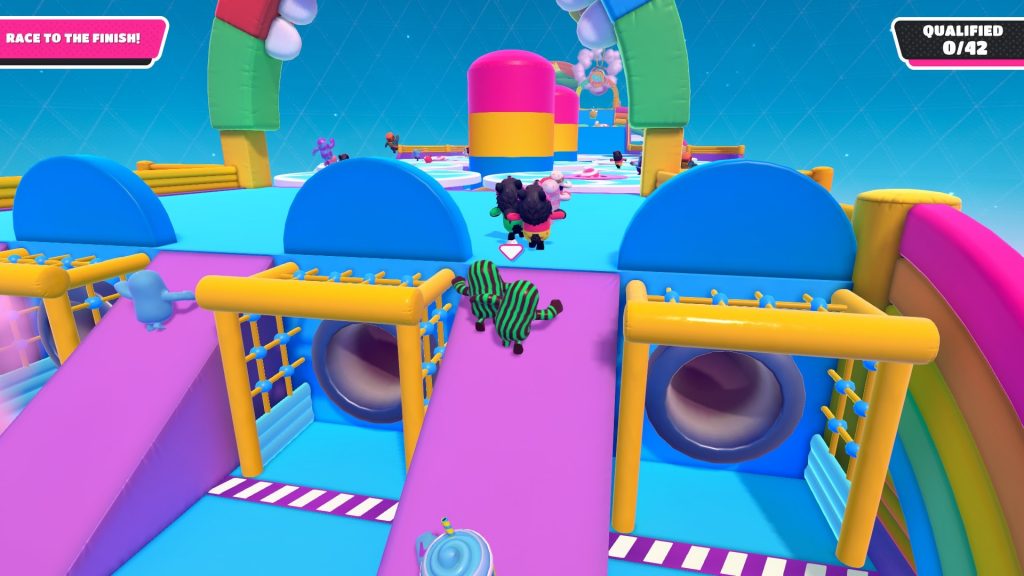 Speaking of playing with friends, Fall Guys: Ultimate Knockout is far more fun when you have some buddies tagging along. After reviewing solo and then reviewing with some other Hey Poor Player peeps, the difference was palpable. The stakes felt a little higher to do better, spectating became meaningful, and you had built-in partners on the co-op stages that you could communicate with over something like Discord. If you have a group of friends that you can play with, I highly recommend doing so if you’re starting to feel a little bored, as it makes a world of difference with this title.

There are a few other outstanding issues with Fall Guys: Ultimate Knockout that were certainly unintended from the developer end that mildly diminished the experience (such as special characters breaking the game), but the dev team really is dedicated to fixing everything. I want to close this review with a plea to anyone who reads it — don’t review-bomb a game when the devs are clearly working on the issues. More often than not, players forget to go back in and change their scores after an issue has been fixed, and that rating stays forever despite a patch addressing the complaints. Both the developer and the publisher have ways to reach out and are absolutely working with players to make Fall Guys: Ultimate Knockout the best it can be. And since it’s already spectacular, all they need from us is patience.

Fall Guys: Ultimate Knockout was the surprise hit that no one — especially not the developers — saw coming in terms of its resounding popularity and success. A slightly bumpy launch will not knock this game down, however, as the dev team is working day and night to get it back up and working to its full potential. If you want to play a quick round (or 10) of addicting eye candy that’s fun for all ages, be sure to pick up Fall Guys: Ultimate Knockout as soon as possible.

Editor’s note: This review is based on a copy of Fall Guys: Ultimate Knockout given to HeyPoorPlayer by the publisher. 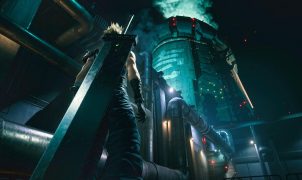