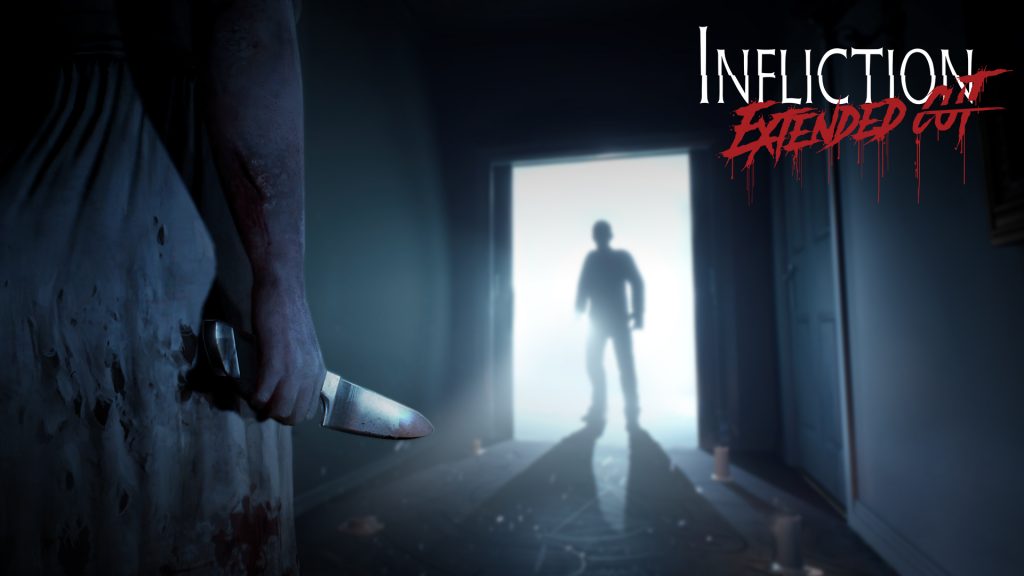 From its opening moments, it’s clear Infliction: Extended Cut is game heavily inspired by Konami’s infamous P.T. demo. From its looping gameplay hook to the murderous female phantom that stalks you through the hallways of a once-happy home turned something much more sinister, it’s plain to see the game’s black heart resides in the house Hideo Kojima built.

However, that’s not to say this is a pale imitation of Konami’s long-abandoned Silent Hill sequel. While Infliction: Extended Cut certainly wears its inspiration on its sleeve, its somber, mature story and suffocating atmosphere stuck with more long after the credits rolled. 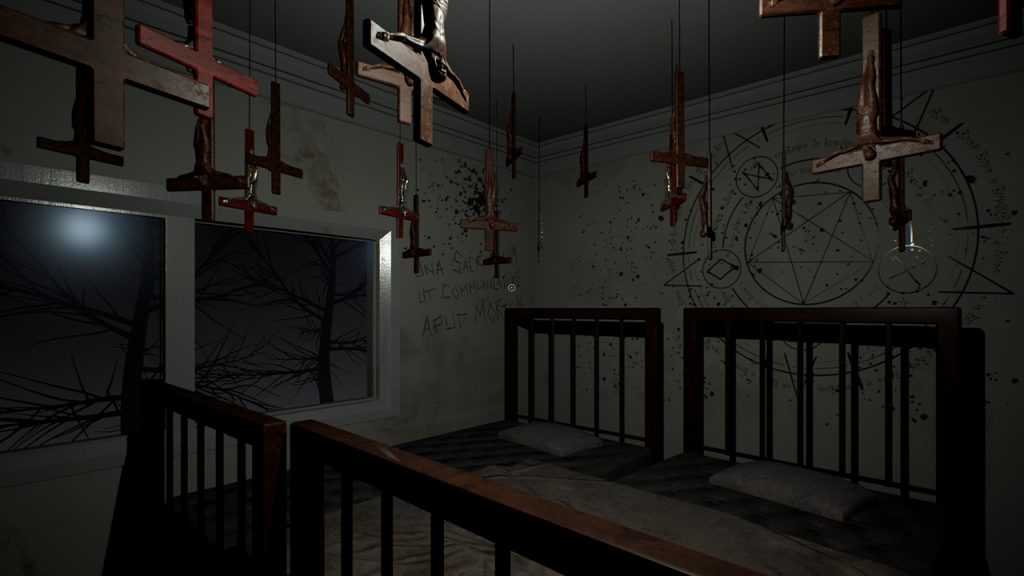 Infliction: Extended Cut doesn’t shy away from the demonic imagery.

Infliction’s story begins innocuously enough as players assume the role of a husband tasked with retrieving your wife’s plane tickets from your house while she waits for you at the airport. But before long, you discover things aren’t entirely as they as the once-cozy house transforms into a nightmarish shadow of itself. Now, haunted by chilling visions and hunted by a terrifying entity, you must scour the house for clues to shed light on the mystery of what happened here while avoiding a vengeful spirit that wants nothing more than to send you to the grave with her.

Your main objective in Infliction: Extended Cut is to explore the house and locate specific talismans so that you can perform a ritual to exorcise the entity. Sounds straightforward enough, right? Well, not exactly. Much like P.T., the house’s layout shifts and changes unexpectedly to keep you on your toes. It’s not uncommon to proceed down a familiar hallway only to find yourself suddenly transported into the bowels of a derelict asylum, isolated cabin, or some other strange locale along with your supernatural stalker.

Not only do the settings change at a breakneck pace, but the timelines do as well.  Throughout the game, the story will seamlessly transition to events separated by decades as the story unfolds. Luckily, calendars are conveniently peppered throughout the environment to help you keep your bearings as you dive deeper into the game’s tragic story, which focuses on some surprisingly mature themes not often explored in video games. Without going into spoiler territory, those who’ve experienced the loss of a child may want to steer clear of Infliction: Extended Cut’s occasionally uncomfortable story of loss, mourning, and redemption. 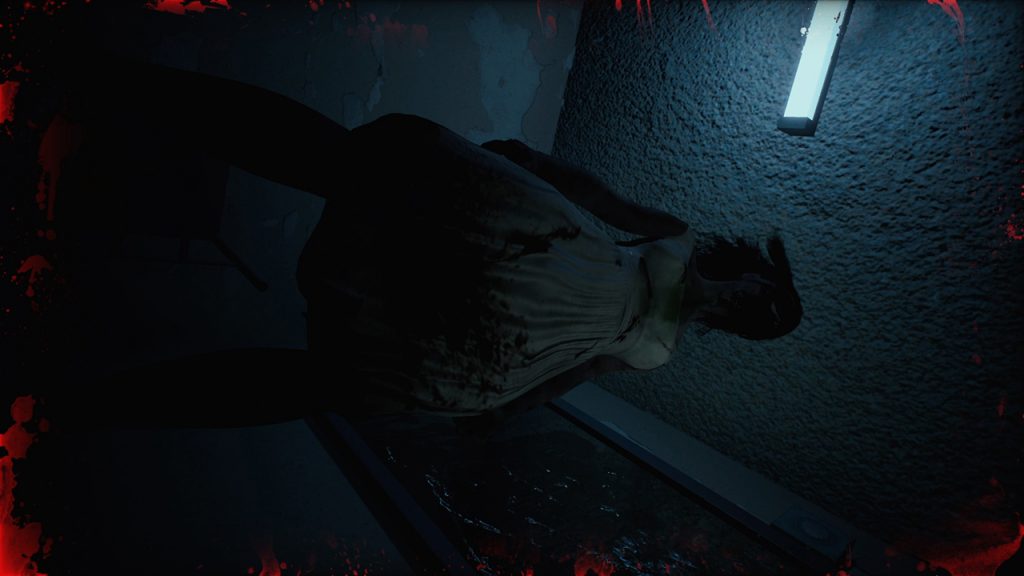 The ghostly Sarah is never far behind, and boy is she scary.

Unlike many games of this type which rely heavily on scripted jump scares, Infliction: Extended Cut’s ghostly antagonist actively patrols the environment in search of the player. And once she comes in contact with you, you’re going to die in some horrible fashion. Thankfully, there are visual and audio cues like heavy footsteps, glitching effects, and the horrifying entity’s voice will always let you know when she’s nearby.

It never takes long before you come face to face with your ghastly companion. When these encounters happen, you’re almost always better off crouching behind cover or hiding under the nearest table or bed until she leaves the area. The game tells you early on that you can use flashes of light from fixtures or a camera your trusty camera to banish or stun her momentarily. However, I found these opportunities so rare that the feature may as well not even exist in the first place. And even when I was able to get the entity in the frame to snap her picture in hopes of stunning her, more often than not, it didn’t do anything.

With that in mind, you’re probably going to die quite a lot during your time with Infliction. But a trip to the pearly gates is of little consequence in this game. When you die, you’re quickly plopped into a different room of the house to resume your hunt for whichever talisman you were looking for to break the curse. 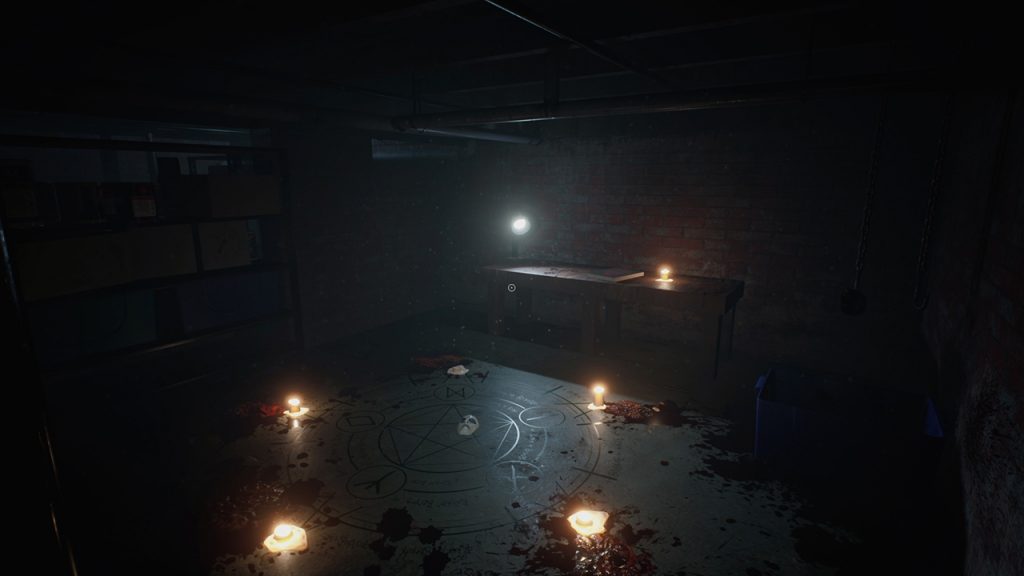 While Infclition’s character models aren’t anything to write home about, some environments are quite atmospheric.

As has come to be expected from games making the jump from the PC to Switch, some ritual sacrifices had to be made to bring Infliction to Nintendo’s hybrid console. From its plain textures to its sparse environments, this port leaves a bit to be desired in terms of visual fidelity, but it gets the job done. The game’s most glaring graphical issue is the fuzzy textures for every object you interact with, which can look almost laughably bad.  The detail in the various monster models is somewhat inconsistent, save for the genuinely creepy jump scares, which are always quite disturbing (in the best way possible).

Still, despite its graphical issues, the game moves at a steady clip, and there are plenty of creepy supernatural effects to help pull you into Infliction’s hellish world.

On the aural front, the game fares much better. Infliction features some superb sound design all around. From the plodding steps of the creatures in the shadows to the sudden creaking of the house itself, it delivers a near-constant audio assault to keep the player on the edge of their seat. I’m not exaggerating at all when I say some of these effects were so unsettling that they left the hair on the back of my neck standing on end.

In addition to the unnerving ambient effects, there’s also plenty of voiced dialog in Infliction. It’s all well done, which can make the more emotional moments of the story all the more heart-wrenching and impactful.

A Corpse Party To Remember

While some of the game’s mechanics, such as your limited defensive options, come across as a little half-baked, the oppressive atmosphere and genuine chills Infliction: Extended Cut delivers make it a standout survival horror title on a system that’s somewhat starved of them. Though many players will probably burn through the game’s five-hour story in just a few sittings, the New Game Plus Mode also does a good job of adding replay value with its revamped puzzles and more challenging gameplay.

Infliction: Extended Cut is a welcome addition to the Switch library that does an excellent job of keeping the Spirit of P.T. alive. If you’re a fan of the genre and are looking for some satisfying scares for your Switch, this one definitely deserves your attention.