No, seriously. What Happened?

Developed by indie studio Genius Slackers, What Happened tells the story of Stiles, a high school student dealing with some heavy baggage. Plagued by anxiety and constant suicidal thoughts after a series of devastating losses in his personal life, he turns to self-medicating with LSD to numb the pain and escape his inner demons. Exploring sensitive themes like mental illness, addiction, and suicide in a manner few other games have, it’s nothing if not ambitious in the way it attempts to raise awareness while delivering a surreal and terrifying journey into the realm of a troubled teenager’s wounded psyche.

Unfortunately, even the best intentions in the world can only carry a game so far. While shining a spotlight on such crucial issues is no doubt a noble cause, What Happened struggles to find a balance when it comes to providing a powerful PSA or entertaining experience. 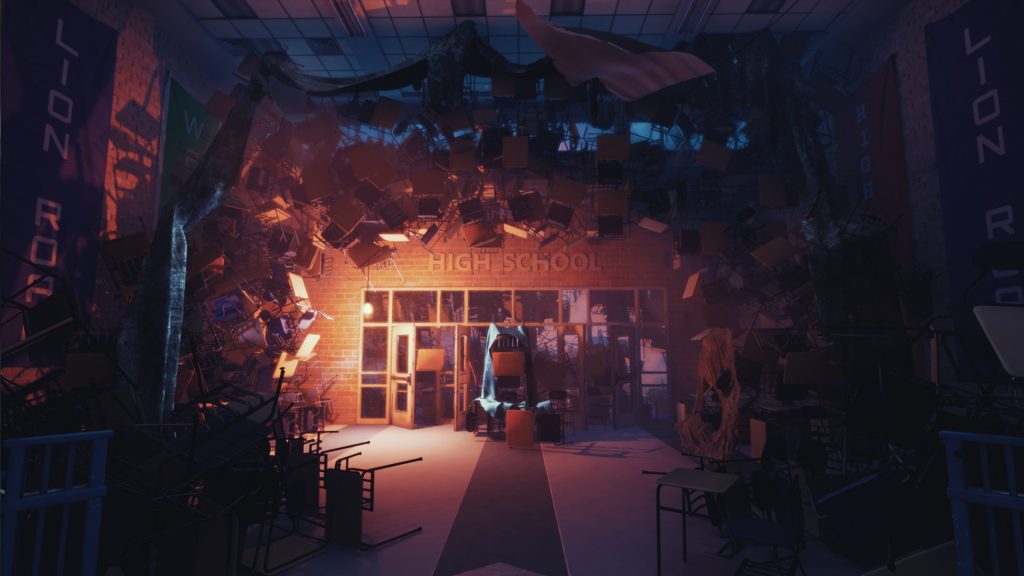 Is it too late to opt-in for virtual learning this year?

Don’t get me wrong: I honestly appreciate what the game is trying to do in terms of its narrative. The problem is neither the writing nor production values are up to the task. Right out of the gate, the game’s subtitles are full of misspelled words and strange grammatical issues. There’s also a ton of voiced dialog, which is usually a good thing. The problem here is these performances are painfully stiff and uneven, which kills the immersion. The awkward way the characters deliver their lines and their inconsistent accents make it hard to take them seriously. It almost seems as if the same person voiced all of the characters in the game. Perhaps this was intentional, given that the story takes place entirely in Stiles’ head. And if that’s what developer Slacker Geniuses intended, then fair enough. But I’m not entirely convinced that’s what’s going on here.

What Happened also suffers from some of the most heavy-handed and cringe-inducing writing I’ve ever encountered. While it tries so hard to be raw and profound, it packs all of the emotional punch of an angry screed scribbled in Wite-Out on a Trapper Keeper, probably surrounded by sloppy doodles of anarchy signs and Vic Rattlehead. Do kids still listen to Megadeth these days? No? Well, alright, then.

As you progress through each of the game’s warped environments lifted from critical moments in Stiles’ life, a persistent voice inside his head regularly reminds him of how much he’s hated and urges him to kill himself. At first, I liked this dynamic. I was genuinely intrigued to see how the developer would handle Stiles’ festering inner turmoil. Unfortunately, while initially effective in underscoring Stiles’ mental and emotional damage caused by his dad dying, girlfriend leaving him, and his best friend betraying him, before long, these verbal assaults lose their impact and just sound silly. What begins as a fascinating window into the abusive relationship between Stiles and his anguished mind devolves into something more akin to two siblings bickering, which is disappointing. 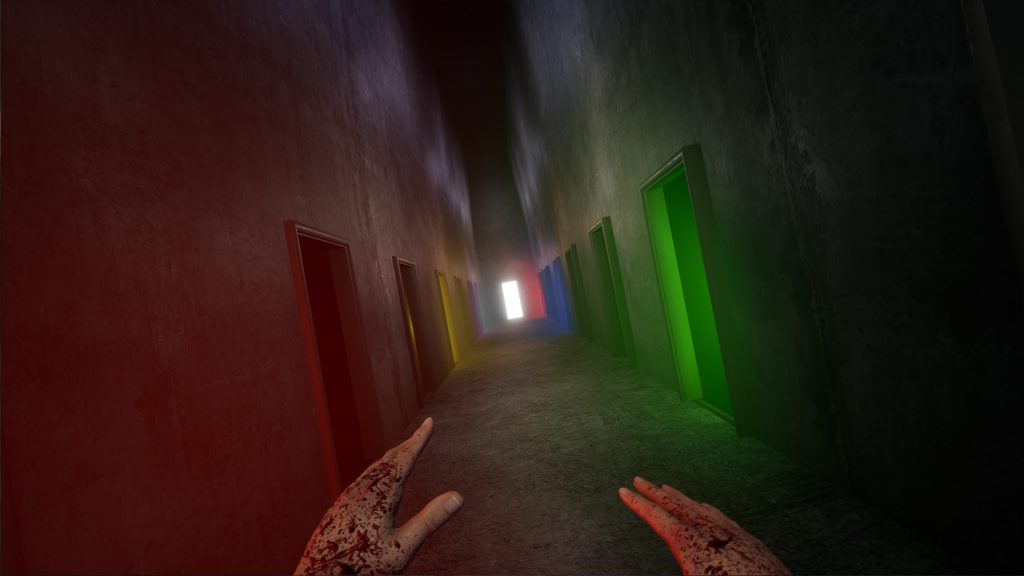 Some areas will slow your movement to a crawl to for dramatic effect, but they prove to be more frustrating than anything.

Now, to be fair, this is a game about a troubled high school student we’re talking about here. But the teenage angst is laid on thick to the point of parody. As a crusty geezer approaching my forties, I found it nearly impossible to find a connection with the game’s young, disassociative protagonist.

But while the game’s narrative missteps are a bit disappointing, that’s not to say it doesn’t have anything going for it. When it comes to presentation, What Happened is an acid-dipped feast for the senses that manages to impress with its surreal visuals and ever-changing environments. Most of the game takes place against the backdrop of High Hopes high school. However, thanks to a liberal hit of acid Stiles takes during the game’s opening moments, the school’s corridors and classrooms shift and change drastically from one moment to the next. Without warning, the walls can twist and turn like a kaleidoscope to give the world a funhouse-like effect. Moments later, you could be following ghostly neon handprints through an overgrown version of the high school reclaimed by the dense forest that surrounds it.

Of course, not all of these changes are entirely so innocent. As the story progresses, Stiles’ situation becomes increasingly more desperate, and the world around him begins to feel like a mashup of Jacob’s Ladder and a weekend at Timothy Leary’s.  I don’t want to give any spoilers, but trust me when I say they’ll leave you on the edge of your seat. If you’re a fan of Layers of Fear’s approach to horror, then What Happened won’t disappoint.

Whose Bright Idea Was This, Anyway? 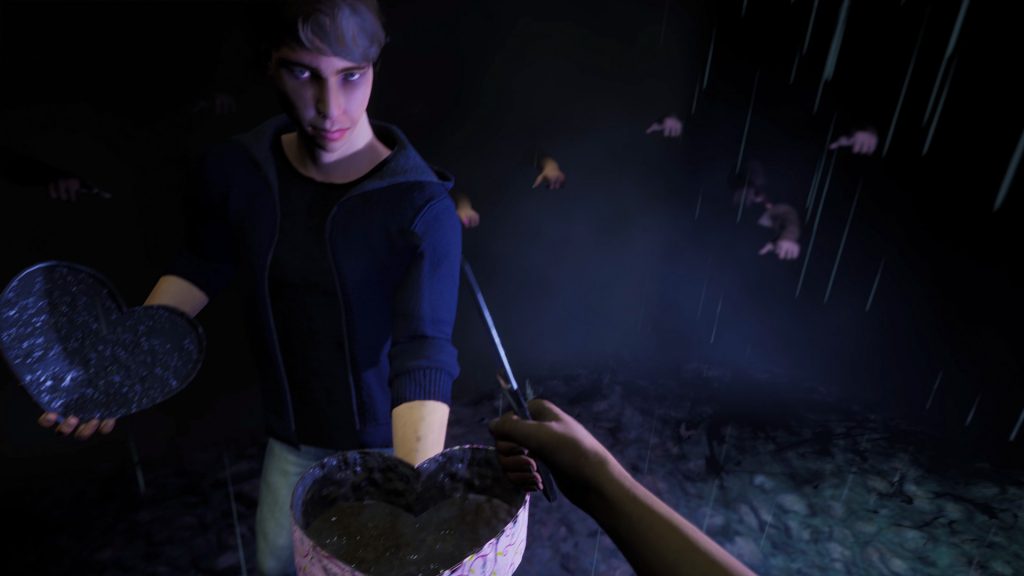 While the story has its moments, Stiles’ interactions with his tortured psyche become pretty tedious after a while.

These psychedelic hellscapes are fun to explore, but I do wish there was more to do in them. Except for a couple of areas, What Happened is a very linear game that corrals you from one area to the next at a breakneck pace. And during that time, you won’t be doing much apart from walking, collecting the occasional journal entry or key, and changing lots and lots of lightbulbs. Yes, you read that right. Turning on lights is Stiles’ primary method of transportation from one area to the next, so you’ll need to scour every cabinet you see for your incandescent savior if you want to progress to the next area.

As you can probably imagine, this gets very tedious, very fast. By the time I reached What Happened’s ending credits, I felt ready to smash every bulb in my house and begin my life anew by living off the grid. I imagine Genius Slackers originally wanted to call the game “How Many Suicidal Teenage Acidheads Does It Take To Screw In A Lightbulb?” but it wouldn’t quite fit on the packaging.

I know it sounds like I’ve been hard on What Happened, but that’s because I feel like it had so much potential. With its outstanding artistic direction, creepy atmosphere, and unique premise, I had high hopes for the game. And while it occasionally managed to pull me into its world of drug-fueled hysteria and desperation, its repetitive gameplay and painful writing had me eager to reach the finale. My playthrough of the game took me just over five hours, but I feel like the story could have reached its conclusion in half that time without taking anything away from the game’s experience.

While I can’t say I’m in love with What Happened, I have to commend developer Genius Slackers for attempting to bring awareness to some of the complicated issues that countless people face, often unknown to those around them. After all, aiming to create something objectively fun while dealing with such dark and dreary subject matter has to be like attempting to extract blood from a stone. The fact that the developer tried to accomplish such an endeavor in the first place certainly earns them my utmost respect. 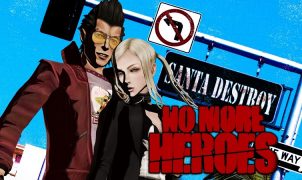 Whatever happened to all the heroes? All the Shakespeare-os? Short version: Aside from a graphics rehaul, it’s literally just like the original down to the Wiimote controls save for…