Just an FYI: I’ve never caught on to any of Kaiu Shirai’s “hardcore hints”. Some TPN fan I am… 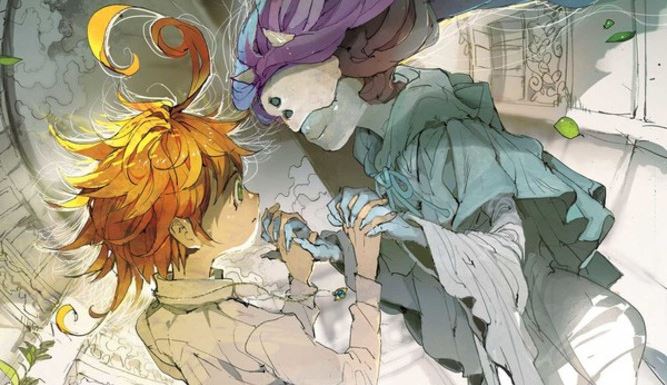 Take a good look below at the cover depicting Emma and Mujika’s embrace; yes, the latter — a kind-hearted demon who disregards her species’ affinity for human affinity — is absent from Volume 15 of The Promised Neverland, yet her very existence is its entire impetus. For the demon aristocracy, her special blood is but propaganda meant to maintain power; for Emma, she’s an irreplaceable friend — enduring proof that demons aren’t all bloodthirsty beasts. Yet Emma’s appeal to compassion arrives at the worst possible time: just after their miraculous reunion with Norman, the boy whose taken William Minerva’s mantle is planning a demon genocide as payback for the millennia-long child farms. As Emma grapples with this inevitable conflict over hatred, Kaiu Shirai’s latest installment compels us to draw real-world parallels over the ghoulish prejudices fueling persecution and discrimination.

Let’s not lose the thread: yeah, that whole demon-eat-man system in cultivating their offspring for consumption? Not cool. But should the innocent demon families obliviously living their lives be punished? Obviously not, and that’s a fact Emma knows better than anyone: from their undercover pilgrimages to demon civilization to meeting Mujika and Sonju, she recognizes there’s good demons just as there are bad humans. (Surely, fellow readers haven’t forgotten the Ratri Clan?) From Conny’s death to the Goldy Pond hunting grounds, Emma has hardly forgotten the horrors of the inhumanity governing their roles as livestock, yet she’s now confronted with hatred on the opposite end of the aisle. Emma’s fear of the deep scorn driving Barbara, Cislo, and the rest may remind certain readers of their own inner circles: friends and family who diligently look out for their own kind, yet frequently grant voice to bigoted principles and racist beliefs — intolerance perhaps born from  their own experiences with “the other”. Granted, The Promised Neverland is a rather extreme juxtaposition, but Ray makes a great point: with such hatred fueling their drive for demon extinction, who’s to say this won’t extend to birthing war among humans?

But you know who else doesn’t know better? Norman’s band of renegade escapees, and as Ray also notes, who can blame them? We’re talking about kids ripped from their idyllic neverlands into nightmarish hells of human experimentation and child slaughterhouses. To the PTSD-ridden victims under Norman’s banner, the mere thought of extending empathy to the cruel enforcers of their abuse is a betrayal to the human race. Indeed, their hatred runs so deep that their sole source of vindictive comfort treats us to one of Posuka Demizu’s most chilling set-pieces yet: a damp, murky basement housing countless demon corpses — dismemberment, categorized, and all ripe for analysis and stress relief, right down to a towering giant subject to mutilation. These kids may be star examples of this endless cycle of suffering, but have they become what they hate?

Can’t we all just go Kumbayah? 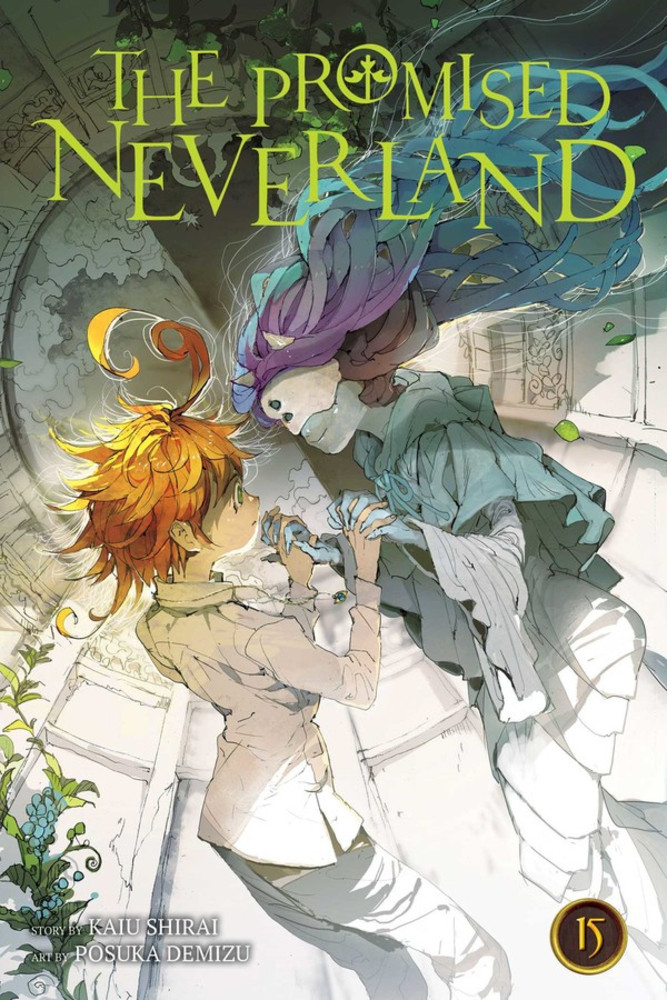 We specifically direct this question to the vengeful Norman — a young man who, by his own admission, would gladly become angel or devil to accomplish his goals. With Ray firmly establishing himself as Emma’s solid rock, Norman’s own brand of pragmatism must now oppose Emma’s idealism: one where her own kindness cannot save the world. His trust in Emma may have him avoid the black-and-white pratfalls shackling his followers, but he recognizes everyone doesn’t think the same way Emma does; yes, he might know full well of the correct path (namely, Mujika’s blood),  yet he’ll gladly shoulder the burden of genocide not merely for his own principles, but for his supporters — merely observing the scene with Cislo’s despondence situates us into the shoes of political leaders and revolutionists who’ve mired themselves too deeply into their agenda to even think about backing out now, lest they incur their supporters’ heartbroken wrath.

And who better to polish off such themes than our dependable artist in Posuka Demizu? The aforementioned basement scene may be the highlight, yet I can’t help but think back to Norman’s battle of words with Lord Geelan — an demonic outcast towering over Minerva’s imposter; his imposing girth and massive claws poised to snap Norman like a toothpick. We may be cheering for Emma, but Geelan’s schemes of betrayal — punctuated by a hairy, salivating tongue slobbering over Norman’s delectable thumbprint — might have us swaying over to Norman’s side. (Ick, even just thinking about it gives me the heebie-jeebies!) The way Posuka effortlessly flexes between soft, cuddly character designs and disgusting Eldritch abominations — all the while juggling this volume’s cute bonus comics — is truly an aesthetic marvel.

As they enter the maelstrom of chaos that is the Seven Walls, Emma and Ray confront past, present, and future as they seek to end this suffering once and for all. As we’re compelled to review not only our own personal histories of racial bias but that of infamous class equality, we can’t help but wonder: can The Promised Neverland juggle mind-game theatrics, carrot-on-stick world-building and brilliant thematic parallels to end? Readers just hopping off its recent conclusion might disagree — yours truly perhaps being among them — but for now, The Promised Neverland hasn’t lost the plot.