Nearly seven months after its January 30, 2020 debut for the PlayStation 4 and Nintendo Switch, Sisters Royale: Five Sisters Under Fire makes its way to the Xbox One. Developed by Alfa System, a tiny but storied developer based in Kumamoto City, Japan, the game is a lighthearted vertical shooter about five lovestruck mystical maidens who’ve abandoned their mission to save the world from the evil forces of Seytan to pursue the love of the angel Yashin.

Featuring a colorful cast of characters and a few clever mechanics to spice things up, this saccharine-sweet shooter is a good time in short bursts. But some gimmicky stage designs combined with the game’s bite-sized runtime make Sisters Royale a fun but ultimately forgettable trip to Bullet Hell. 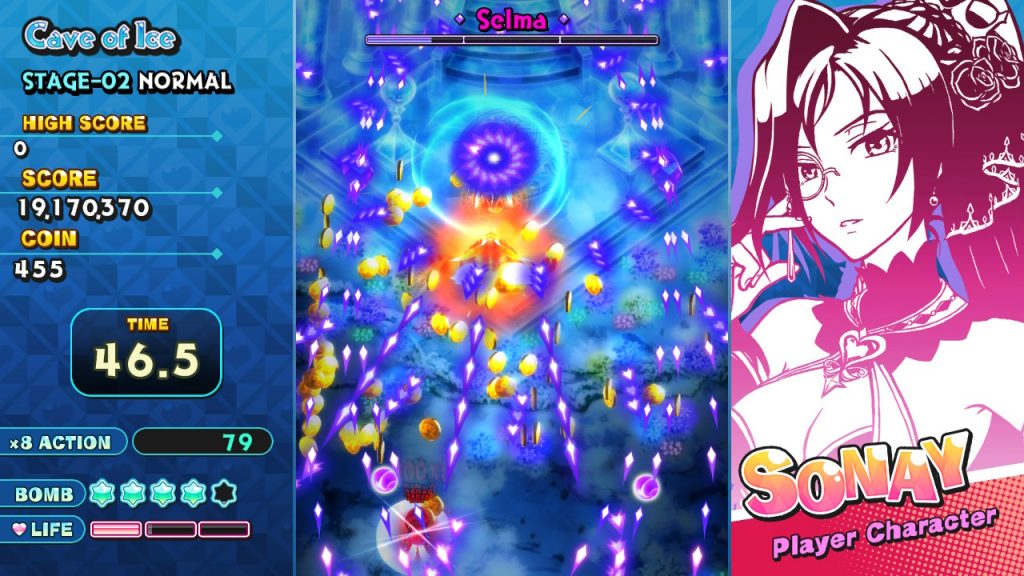 Destroying enemies while using the TBS feature rewards you with a satisfying shower of gold coins.

I’ll say it right out the gate: cringe-inducing doesn’t even begin to describe Sisters Royale’s cheeseball narrative. It’s awkward, nonsensical, and filled with more anime tropes than you can shake a tsundere schoolgirl at. However, once you get past the quirky story scenes, you’re left with a pretty snappy little shmup that shows flashes of promise.

Sisters Royale allows you to choose from five playable maidens (with an additional character, Ode, available as paid DLC), each with unique personalities and shot patterns and familiars that assist them in battle. For example, the hot-headed Sonay is the oldest of the sisters and more or less the main protagonist. Her shots fire in a straight line while her familiar will lash out and gobble up enemy after enemy like a rabid dog. On the other hand, the second-youngest sister Nur has fires loosely guided magic bullets and can use her familiar to circle her like a death-dealing tornado. Each sister player differently, and it’s a lot of fun experimenting with the game’s cast of characters to see which one fits your particular style.

The TBS system is perhaps Sisters Royale’s most exciting feature. Short for Tension Bonus System, this mechanic first appeared in Alfa System’s cult classic shooter Castle Shikigami. TBS essentially incentivizes you to take risks to maximize your score and increase your damage output. To do this, you’ll need to get as close as possible to enemy bullets without touching them – a feat which is easier said than done given the hundreds of shots that can fill the screen during boss fights against your rival sisters.

The Five Stages Of Grief 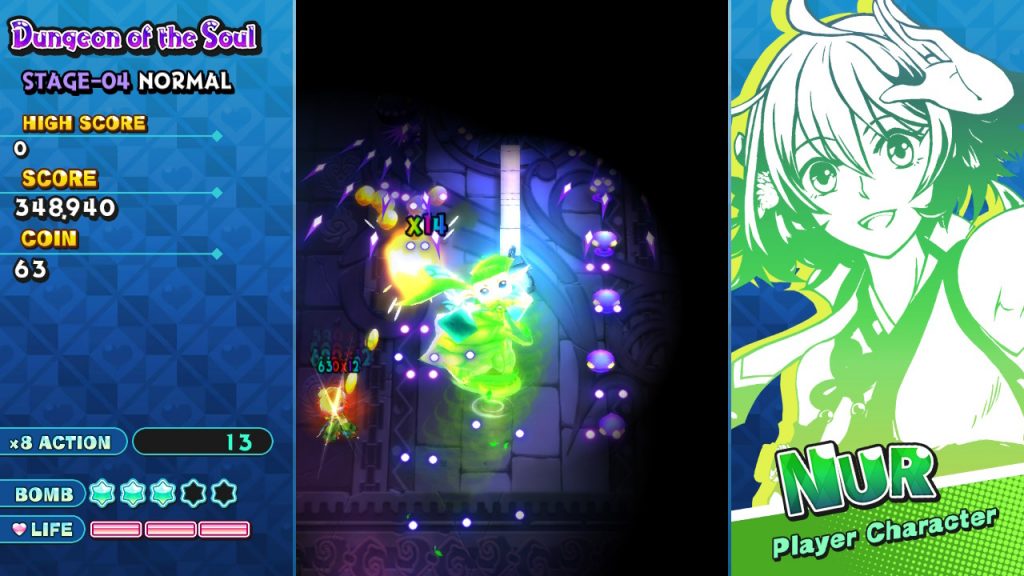 I love Sisters Royale’s TBS feature. Tracing waves of glowing death to send my score multiplier through the stratosphere or dispatch a particularly tricky boss before it escapes is quite satisfying. It’s just a shame that the stages that lead up to these exciting encounters are very lacking and rely more on annoying gimmicks than anything else.

Nur’s stage, for instance, is a temple in the wilderness that’s filled with fans that will blow you off course with powerful gusts of wind. Sound fun? Well, if you like that, you’ll love Selma’s stage, which takes place in a frozen cavern. As you make your way through its frosty interior, large pits of ice appear and spread across its surface. Coming in contact with these frozen paths will send you slipping and sliding all around the screen. Lale, the youngest sister, ups the ante further by plopping you in a pitch-black dungeon where only your bullets and the occasional lantern will illuminate your surroundings.

While hazards like this would work in say, a platformer, they are the last thing you want to deal with in a shmup where survival demands pixel-perfect precision. Sure, I commend Alfa System for attempting to do something different with Sisters Royle to make the game stand out. But I think these stage hazards fall flat by introducing an unwelcome element of randomness to the proceedings. Add to this the brevity of the stages (you can beat the game in about 15 minutes) and some of the blandest enemies to appear in a shooter this side of a Touhou game, and you have a shmup that will leave all but the most desperate fans of the genre wanting more.

Thankfully, multiple difficulty modes and a surprisingly robust options mode add some welcome replayability to Sisters Royle. In the options menu, you can tweak things like the size and speed of enemy bullets, and even adjust the range of the TBS system to make things a bit easier or more challenging. These features, combined with an enjoyable practice mode and “tate” support for vertical displays, make it clear Alfa System knows what shoot-’em-up fans want in terms of extras. It’s just a shame these features aren’t enough to save Sisters Royale from being a rather mediocre offering – which is surprising given Alfa’s pedigree for crafting some pretty superb shooters over the years.

Make no mistake; Sisters Royale isn’t a bad shooter. The TBS system is a really cool feature that adds a welcome layer of risk versus reward to the frantic action. However, those hoping for a spiritual successor to the excellent Castle Shikigami series will likely be disappointed thanks to the game’s gimmicky stage designs, lackluster enemies, and a story that’s borderline painful to suffer through for all but the most shameless weebs out there. Despite these issues, the intense boss battles are engaging and addicting, and the game packs plenty of replayability with its five playable protagonists, each with their distinct playstyles to master.

At the end of the day, the Xbox One isn’t exactly swimming in quality shmups when compared to the PS4 and Switch. And given its budget-friendly price of $13.99, this game probably won’t break the bank. If you’re in the mood for a cheap and quirky shooter that doesn’t take itself too seriously, you can certainly do worse than Sisters Royale: Five Sisters Under Fire.