Beyond a Steel Sky Review (PC)

We got trouble right here in Union City 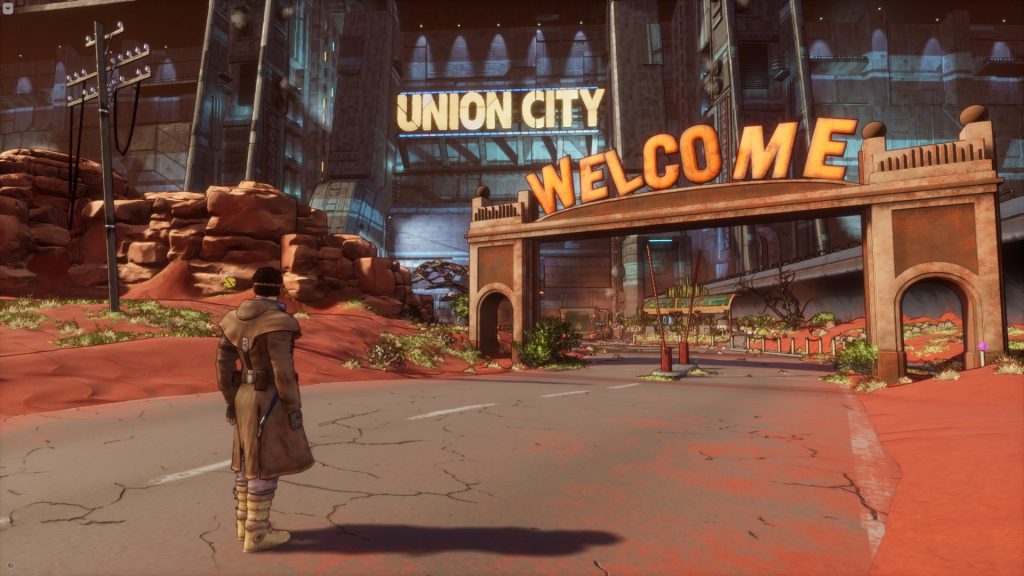 Remasters, remakes, sequels and more are starting to become the demanded norm in gaming. Beloved franchises long-thought dead are having new life breathed into them, the market ripe and ready for more content. And while some big names like Kingdom Hearts and Shenmue received some love last year, smaller games that few people expected to see the light of day again are beginning to take their first steps in a new decade. Games like Beyond a Steel Sky, the long-awaited sequel to 1994’s cult classic Beneath a Steel Sky initially released on Amiga home computers. 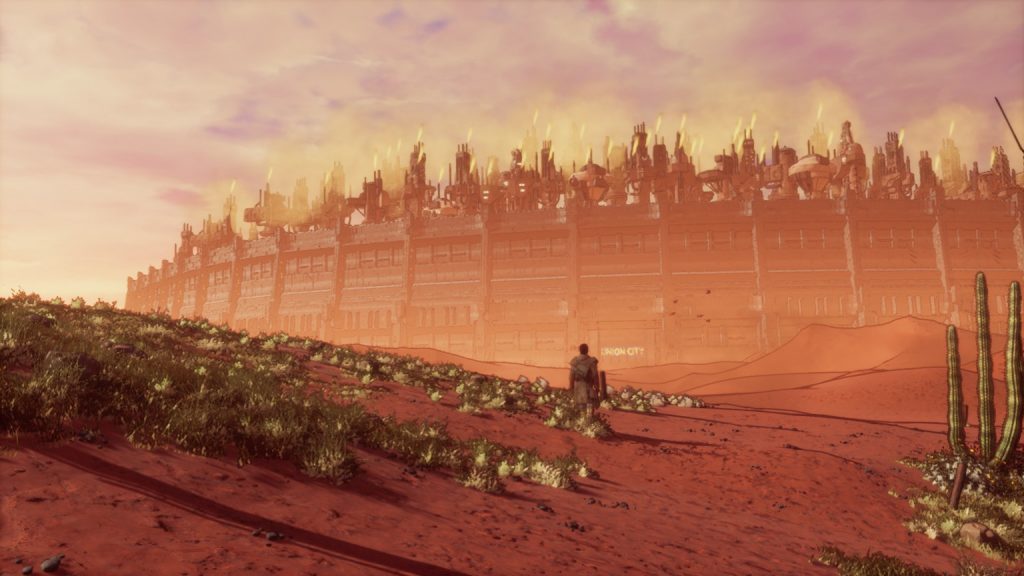 If you haven’t played the original, you can be forgiven — after all, PC gaming in the ’90s wasn’t as accessible as it is today. But if you had a chance, you know how mind-blowing Beneath a Steel Sky was. Luckily, it’s now available for free on GOG, so interested parties can play at no cost. Also luckily, playing the original isn’t a pre-requisite to understand Beyond a Steel Sky, although the nods to its predecessor are heavy-handed. 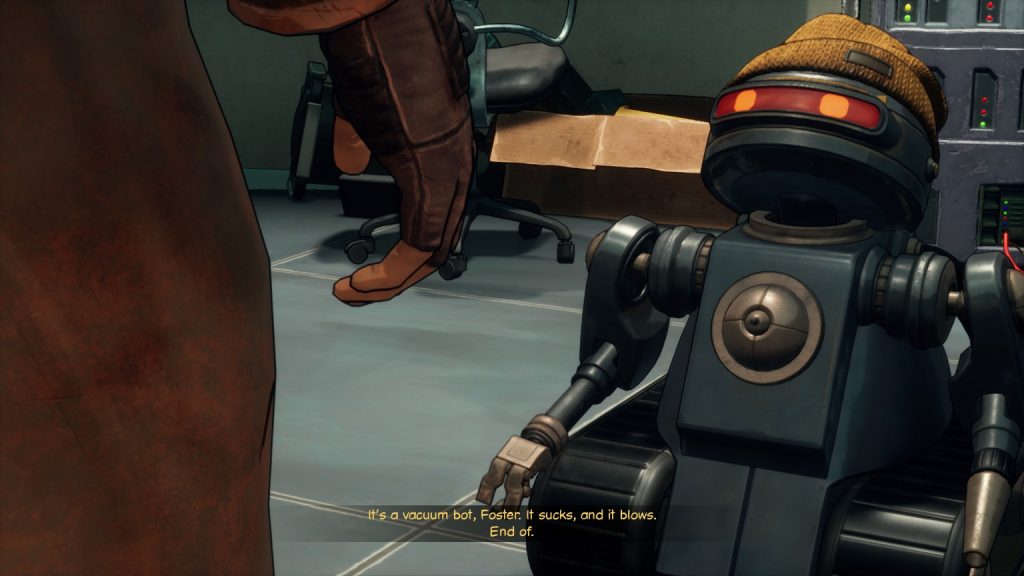 Developed and published by Revolution Software Ltd, Beyond a Steel Sky has players reprising their role as Robert Foster after a 26-year hiatus. Having left Union City behind in the first game for a peaceful village in The Gap, Foster had become content with his lot in life — until a strange vehicle kidnapped Milo, the son of a family he had become close to. Swearing to return with Milo in tow, Foster left the village, following the strange vehicle’s tracks. Foster was surprised it had lead him straight back to Union City — a place he’d left in the hand of his capable robot friend Joey 10 years prior. Thinking Joey could assist in finding Milo, Foster asked around about Joey, discovering his friend had left five years ago for parts unknown. With more questions than answers, Foster explores Union City once more, looking for Milo, Joey, and the secrets Union City wouldn’t yield upon first glance. 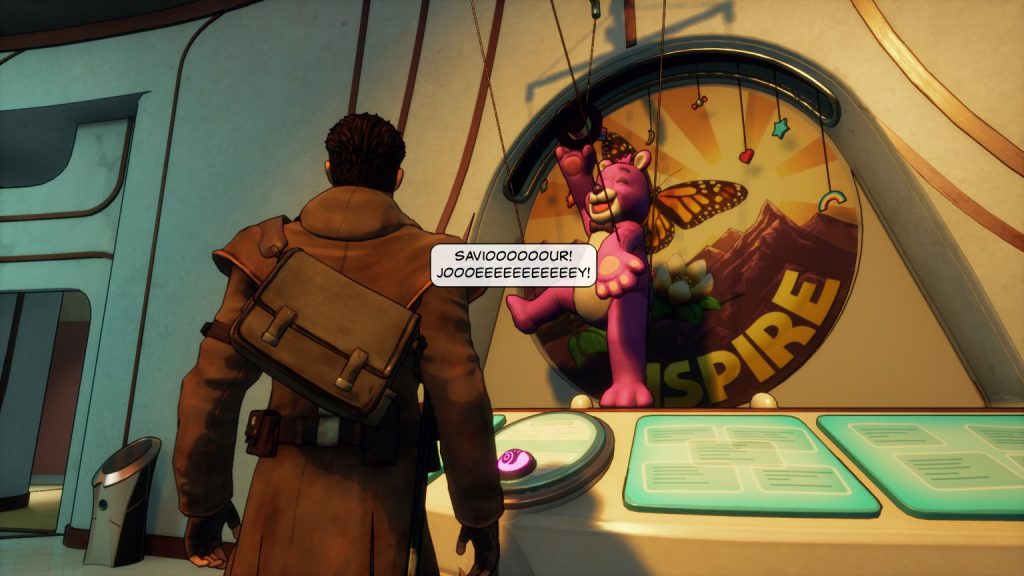 Controls in Beyond a Steel Sky are interesting for a point and click — instead of just pointing and clicking, there’s also WASD for movement and Shift to run. Perhaps it was a necessary addition, as Beyond a Steel Sky is 3D instead of the traditional 2D design that tends to accompany most titles in the genre. On the plus side, this makes the world feel as if it has more depth; unfortunately, because so many of the things you can interact with move somewhat unpredictably, this means trying to lock in on something to click can become an exercise in both patience and frustration. The good news is that most things you need to interact with to progress do move in a predictable fashion, while the more erratic items are for flavor and can be bypassed if desired. 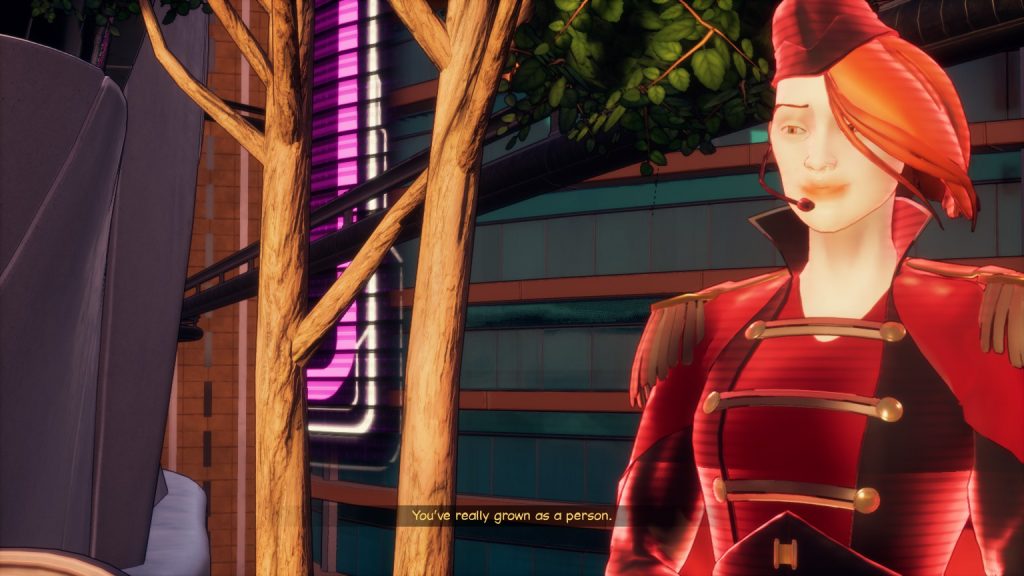 Speaking of flavor — WOW. Beyond a Steel Sky has it in SPADES. I’m blown away by the absolute depth of the world-building involved in Beyond a Steel Sky; there’s a real history here that goes beyond what players see in-game. For example — in Union City, there’s a system called QDOS that acts as a sort of social credit system. By showing up to work, participating in daily polls, being happy, and generally just obeying the rules, a citizen’s social standing will increase. The goal is to get your QDOS as high as possible to ensure you can live in the coveted area closer to the ground. Most citizens care deeply about their QDOS standing — so much so that they’re willing to do anything to maintain it, including pretending that the stranger who just waltzed into their home is their husband. 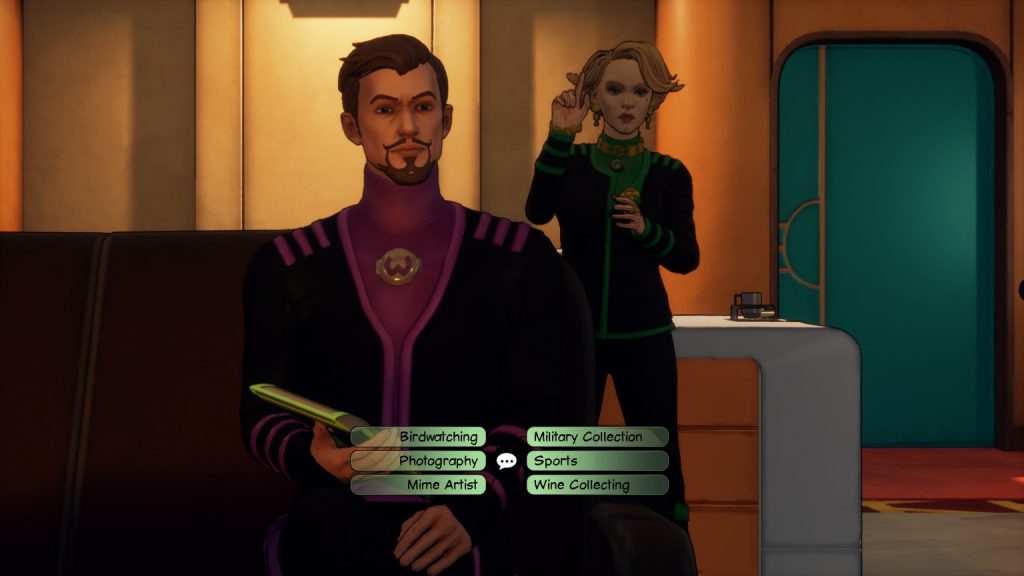 Oh yeah, about that — in order to get into Union City, Foster needed a U-Chip, or a small chip inside the palm of his hand that allowed him access to the city’s system, that belonged to a citizen. By speaking with a young trader on the perimeter of the city, Foster not only got the ID of a citizen that had recently passed but a hacker tool that opens even more doors with a little bit of “rewiring.” Perhaps the best part of the game, the hacker tool allows players to use basic coding logic (if/then) to progress. Switching up things like messages robots project, allowing access to areas that would have otherwise been denied, and all sorts of other things become an integral part of Beyond a Steel Sky. It’s not anything I’ve seen before and cleverly woven into the storyline — I’m definitely in love with this mechanic! 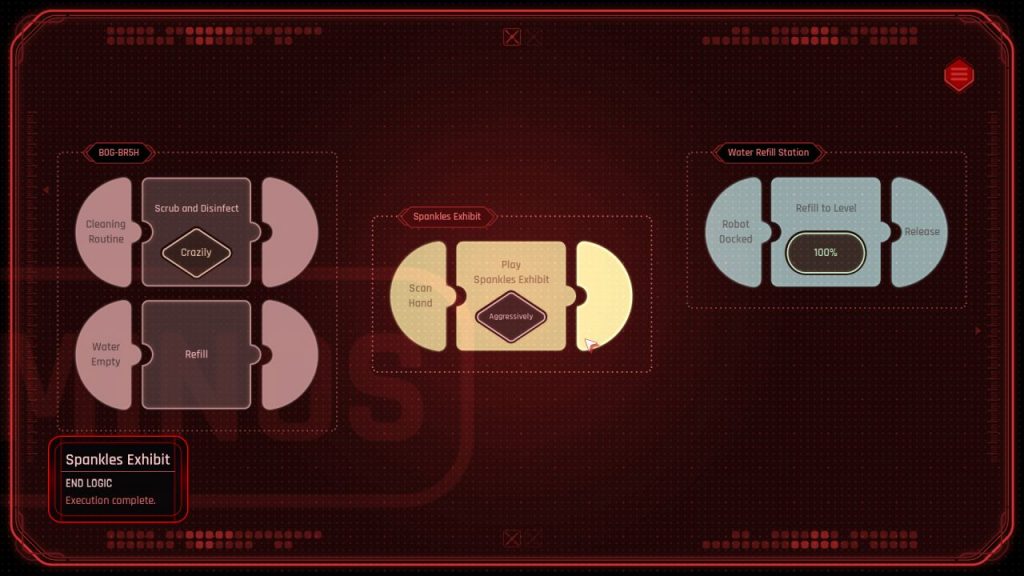 Back to that identity you stole — as it would turn out, the dead citizen’s ID you now possess is somehow linked to Milo’s disappearance. Which is perfect, considering you need to know everything about the man you’re pretending to be in order to blend in while investigating the trail of the missing child. The man’s wife isn’t about to risk her QDOS rating, so she’ll help keep your cover to keep her standing, but she’s not about to go on an adventure with you. She has her points to think about, after all. 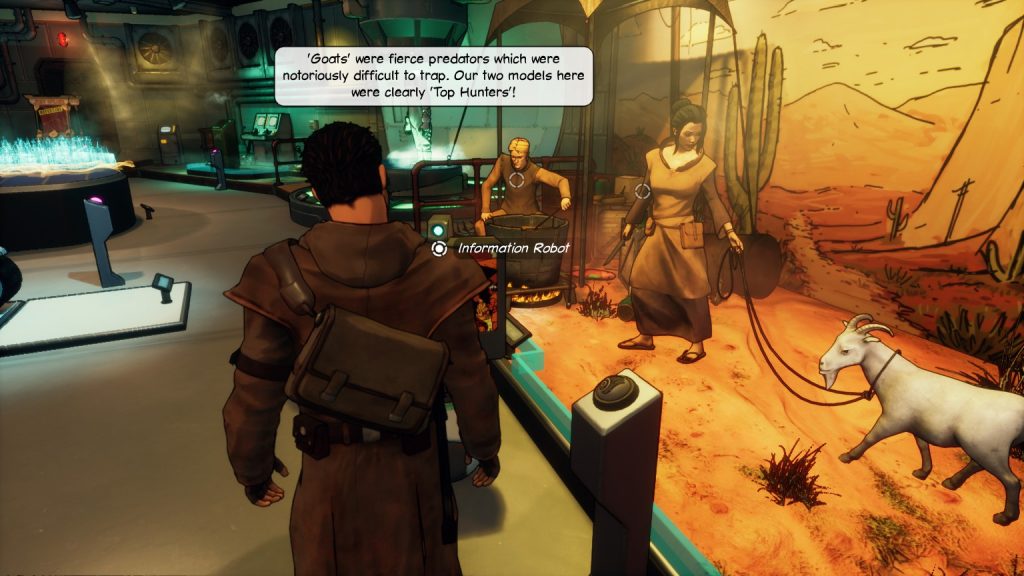 Suffice it to say, Beyond a Steel Sky’s strongest points are in its design and attention to detail. The hacker tool could have been a much harder facet of the game, but with good UI, it was a fun, exploratory experience. Characters had personality — even individual robots had their own unique charm — and were often more human than actual humans. My favorite character was easily Greta, the AI who assisted citizens at specialized Greta terminals. From her inflections to her movements, to her tone and the words she chose (“polite apology”), you could tell from Greta alone that so much of Beyond a Steel Sky’s design was a labor of love. 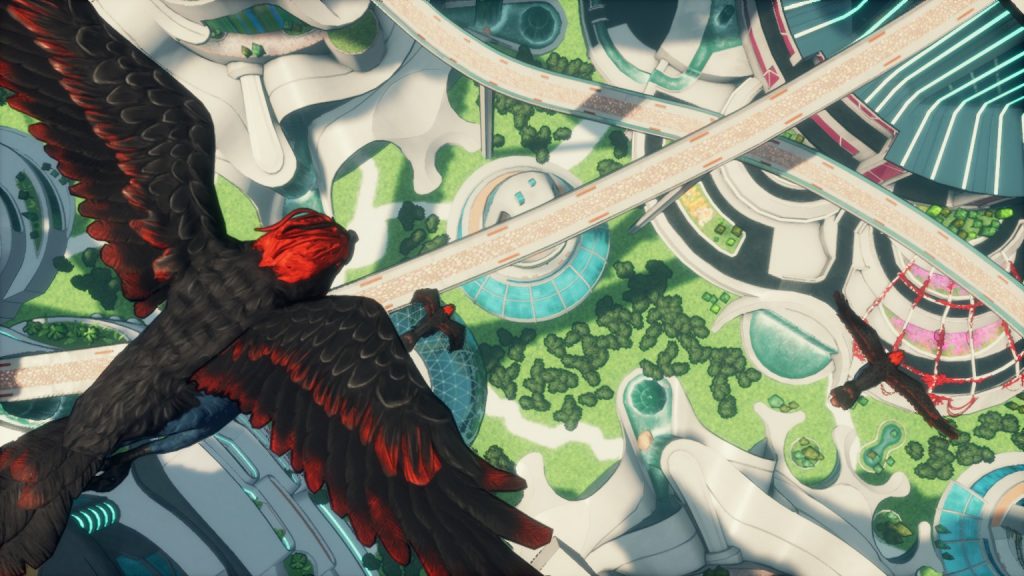 Oh, and Easter eggs. There are a TON of them. 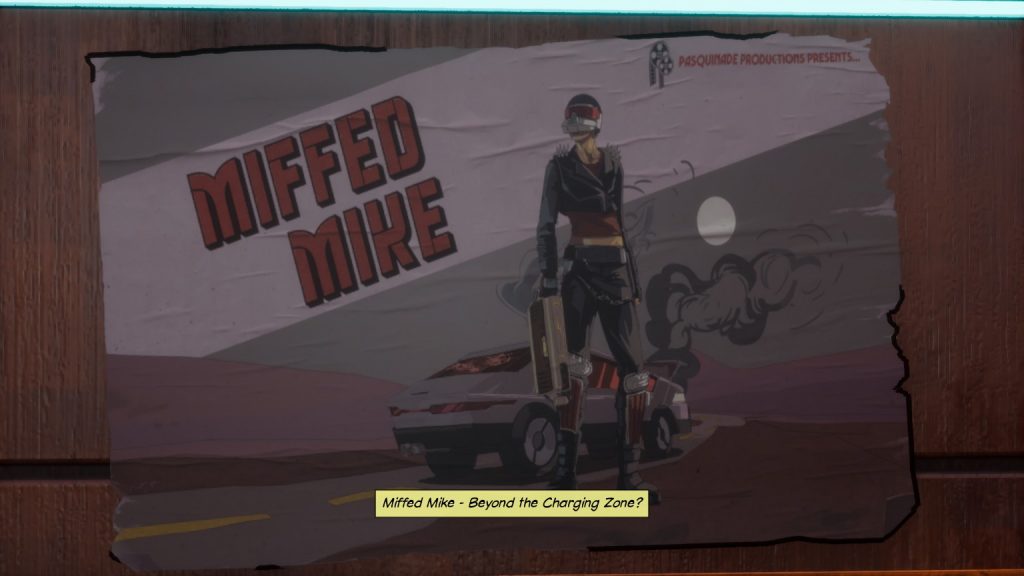 As I kept playing, I kept finding myself coming back to the same conclusions, be it 10 minutes in or 10 hours in. For one, I had wished the storyline had a bit more urgency to it, as I became pretty sleepy while playing Beyond a Steel Sky. It was so easy to get distracted — even when you were moving forward on finding more information about Milo, I never felt like there was any sort of reason to hurry. Why I felt a false sense of security in the midst of a kidnapping I’m not sure, but Milo’s safety wasn’t a huge concern for me. Additionally, I found myself drawn more to the robots than the humans. I think this had more to do with a bug, but certain dialog options would keep “insisting” they had new information despite repeating themselves in perpetuity. Humans would get annoyed and exasperated, while robots would repeat themselves without judgement. In that sense, it’s a nice bit of world-building, but I felt almost punished for doing something the game suggested was okay. 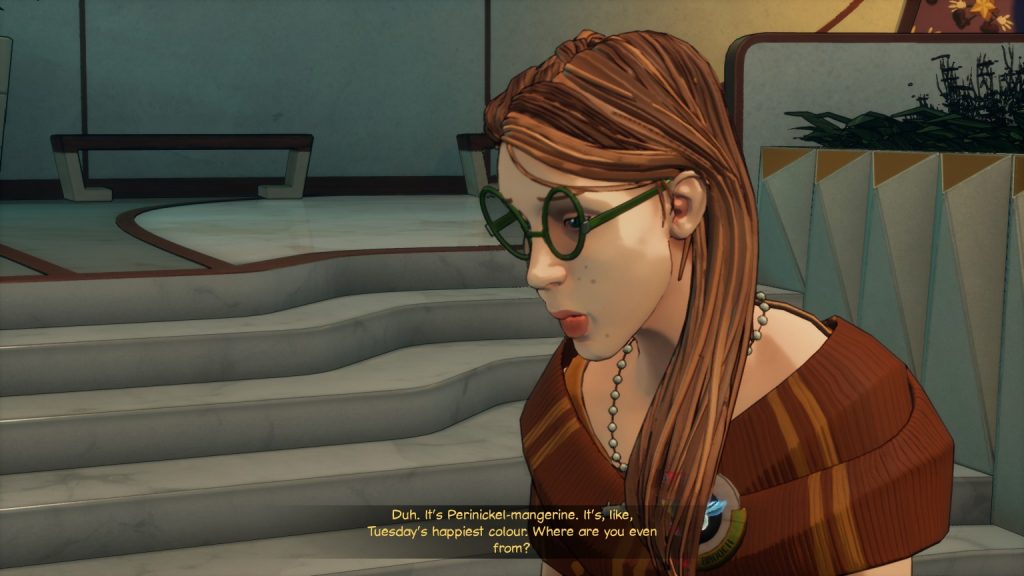 In fact, Beyond a Steel Sky’s bugs are what holds it back from scoring much higher. Don’t be fooled into thinking there are perfect games out there — every game comes with issues. Beyond a Steel Sky, unfortunately, has some pretty noticeable ones. There’s the aforementioned issue where old dialog options are presented as having new information, which is totally workable, but then there’s a more serious one that I and many others experienced that can be gamebreaking. At some point, some characters flash as if you can click on them, then stop to show you cannot in quick succession. In one instance, I needed to speak to a person to progress, but she kept flashing on and off with me unable to ever click on her. Luckily, I had a previous autosave and reloaded from a while back and didn’t experience it again; others in the forums were not so lucky and had to start over completely. I can imagine the frustration. 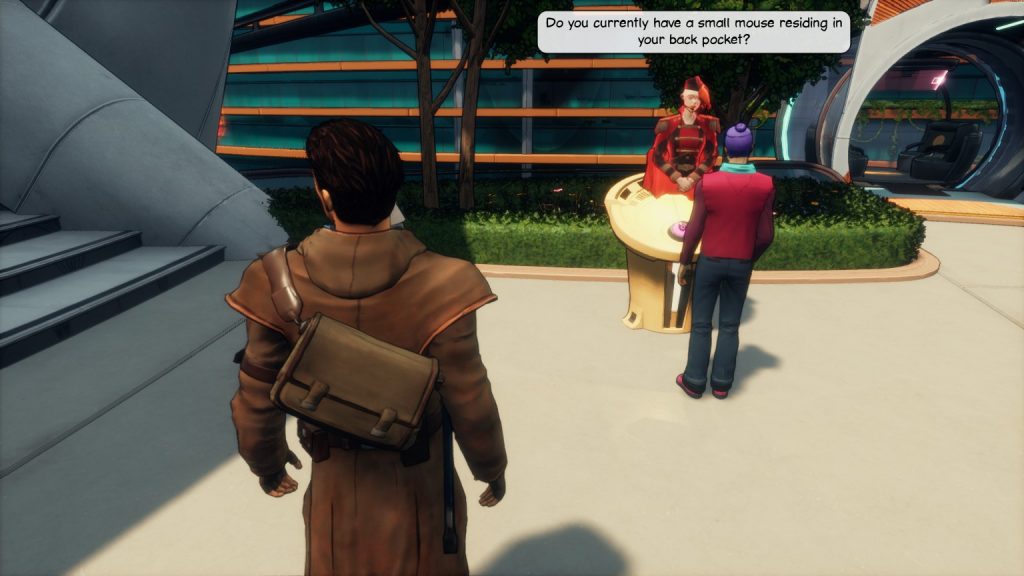 While the developers are working hard to fix issues, this gamebreaking bug is experienced after players invest an hour or two — one of many they’re currently addressing. I imagine in a few months they’ll fix most of the serious issues, but if I had to put myself in the shoes of fans who had to unlock the existence of this game as a Kickstarter stretch goal for a different game, I’m not sure how forgiving I’d be. And while I can speak Beyond a Steel Sky’s praises regarding clever mechanics, phenomenal world-building, and fantastic writing, the bugs it launched with are severe and unfortunately brought it down to something lower than it truly deserves. It’s heartbreaking to say because the love and dedication is absolutely there; it’s a shame what a rocky launch can do to a solid game from a legendary series.

It hurts to rate Beyond a Steel Sky like this; I don’t want the bugs to hold back what is truly an incredible and unique game. The world-building is genuinely amazing and the hacker tool is such a clever mechanic I’m itching to try out more. But the storyline is paced a little too slowly considering the urgency of the situation, and a bug preventing progression unless the player had the foresight to save early on is hard to look past. I love that Beyond a Steel Sky feels like a ’90s point and click, and for me, that’s enough to pull the PayPal trigger — despite everything, it’s a worthy purchase. I have faith in the developers and think that, in a few months this will be a flawless experience; until then, maybe keep this one in your backlog (or at least save constantly).

Full disclosure: This review is based on a review copy of Beyond a Steel Sky provided by the publisher. 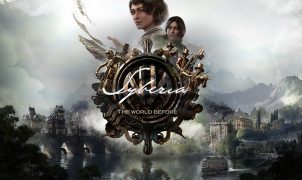